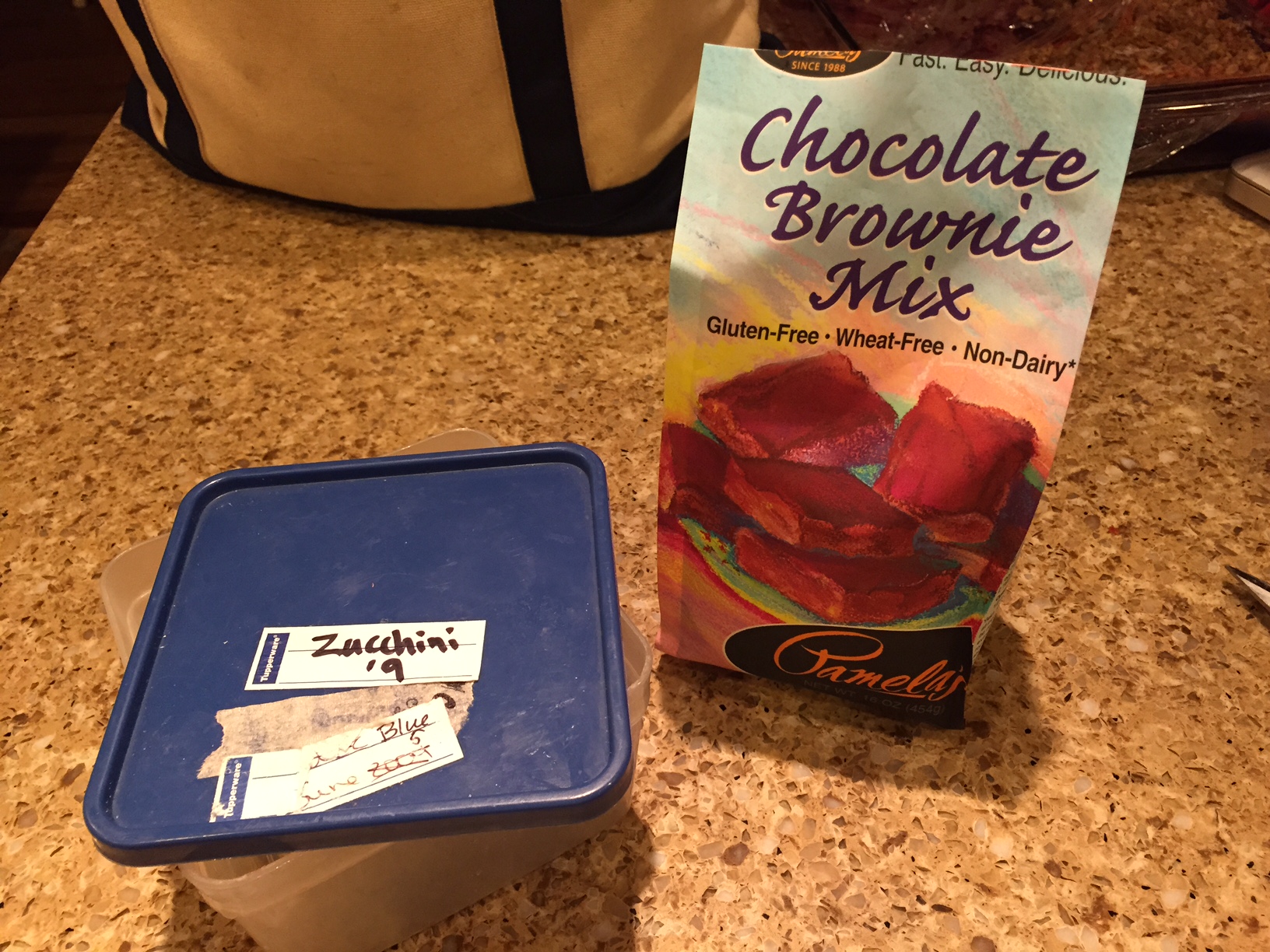 I found some zucchini in the freezer, marked ‘9.  I don’t know if it was really that old, or if I was lazy when I froze it, but it was perfectly fine.  I made a batch of brownies from an old mix I had in the pantry and stirred the drained zucchini in.  They turned out good.

The single way we saved the most money this past week was the amount of help we got from friends and family with the sorting and moving.  If we had to hire the amount of help we got, it would have cost us hundreds of dollars.  We were able to move 2 huge loads over to my brother-in-law’s.  When my husband offered the one man, who is a relative stranger to us, gas money, he declined, but agreed to take an old wood splitter Rob did not need anymore.  It needs work, but the man seems delighted.  No one else wanted anything.

I found 8 small glass bowls in the attic.  Why were they there?  What was I ever thinking?  Who knows, but I was planning to buy some for the camper.  Even at the dollar store, they would have been $8.  I also found some glass casserole dishes in the basement that I have not used for a long time.  My mom and I cleaned them all up, and I will choose what will fit into the camper, and donate the rest.  I will need more glass/casserole dishes than I use when camping, since we plan to stay in the camper for a few weeks between houses.  I have many offers from friends and family to come to their houses and cook casseroles, etc., if I want to and then just warm things up in the camper.  I may do some of that.  I also may have Rob barbecue everything outside, or give the kids sticks over the fire, when we are at a campground.  I do have a teeny, tiny oven in there and some burners, so I plan to cook a bit in there, as well.  There is a small microwave, and I prefer glass to warm things in.  I had some very old plastic bowls in there, but now I won’t.

We contacted a realtor, who was highly recommended by a friend.  We will have her out Tuesday to discuss things.  I hope that the immense amount of cleaning and sorting will meet with her satisfaction, but she will probably give us lots of tips to finish up the job.  I hope to get a higher price, obviously:)  We are wanting to get this on the market as soon as we can.  As Brandy, The Prudent Homemaker, pointed out–the sooner it sells, the sooner we can stop paying payments on it.  As the payments are very hefty, that’s what we were thinking, too. 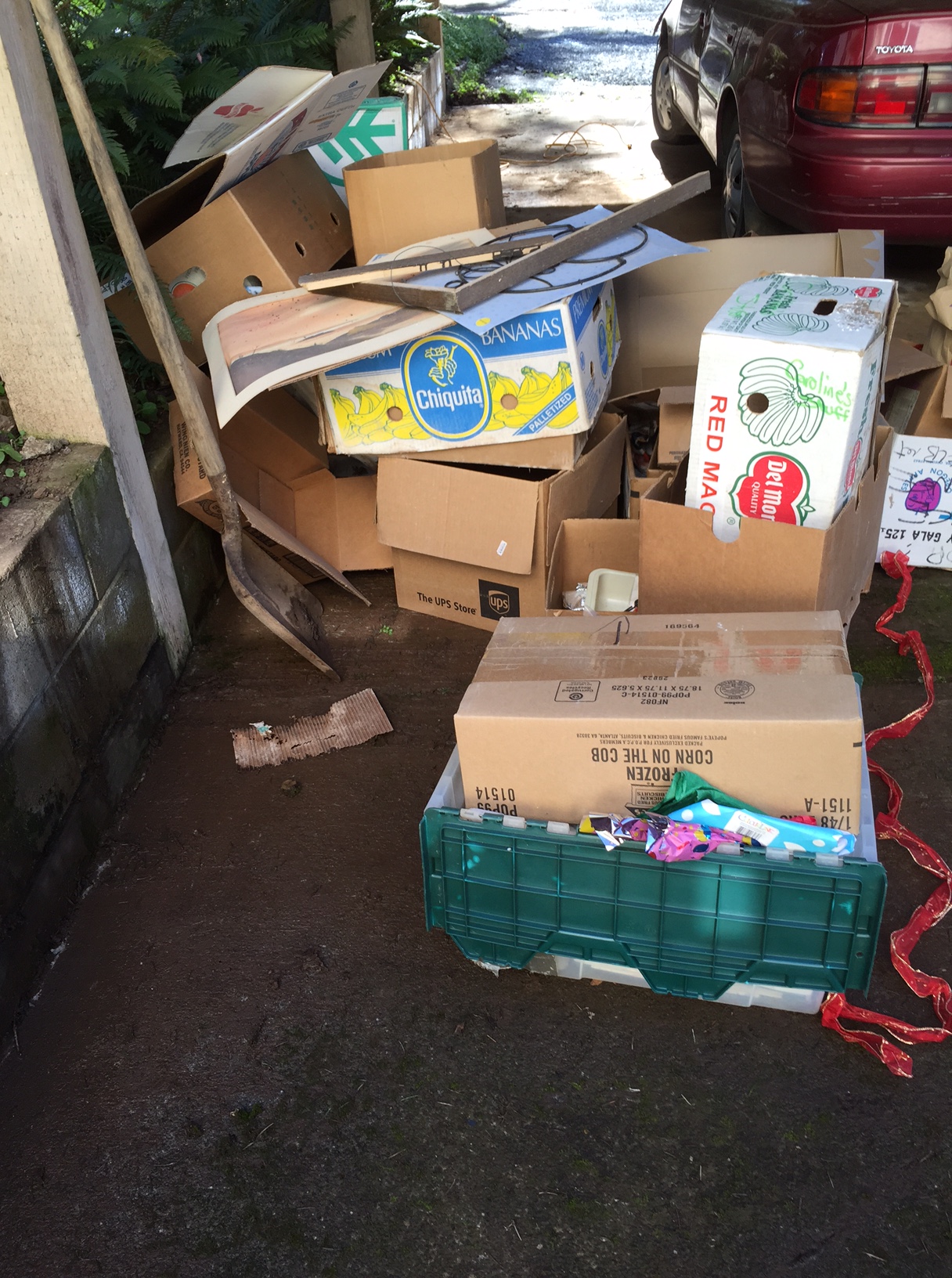 Piles of trash were burned, saving garbage fees.  The red car in the background has been inoperable for quite some time.  Rob and my nephew, Steven, got it going, and Steven took it home on Saturday.  He has the parts, which Rob paid for, and will fix it for free.  The door has been smashed in on the side, and he thinks he will be able to get new doors as well.  One of the girls will probably end up with it for a first car when Steven gets it fixed up.

We sold a few more things on e-bay.  They were not costly, but one interesting one was a cut thunder-egg rock Rob found in the shop.  It sold for around $3, and the buyer paid shipping.  I think sometimes we take things for granted, because we have had them for a while.   I remember my mom had one on a little shelf and I always loved looking at it when I was a child.   Rob and his dad loved rock hunting, and so we do have more of them to enjoy.  I’m glad someone else can enjoy this rock.  He wasn’t sure when he put it up on e-bay if anyone would want it, so it was a nice surprise.

My aunt helped Patsy cover a pillow form I found, while sorting, with flannel for her camper bunk.  I already covered another one for Ja’Ana.  I hope to find another form and make one for Lovana, as well.  I think if they can prop up on their bunks, or have pillows for lounging on the floor while watching tv., they will feel more cozy.  I got some new sheets at Macy’s on a very good sale for the camper.  Ours have holes in them out there, and I am replacing them.

Rob went to get the camper back, but it needs one more thing done, so he came home empty-handed.  Hopefully, it will be done soon.  I’d really like this huge pile of things out of my bedroom.  They belong out there.  Almost all of the work is warranty work, but one thing we will be paying for, because we want it done.  It is less expensive to just leave it there until it’s done completely.  There was a seal that was leaking, and that would be tragic if we didn’t get it promptly fixed.  Water is not our friend in a camper, except in the faucet and bathtub:)  By catching it early, and them fixing it under warranty, we saved thousands of potential dollars worth of damage and repairs.  I’m so glad we are year-round campers and took it out over the Christmas break and found this problem before any significant damage was done.

We were able to clean the basement out and make a place to stack storage bins.  We saved at least $200 by not having to rent a storage unit for those things for another month, at least.  We are finding that storage units are costly.  We have never had to rent one before.  One place, that is less expensive ($189/month for the biggest unit), is full.  Another one is around $229 for a little less space.  Yikes!  That will add up quickly.  All the more reason to be thankful for the things we can store over at my brother-in-law’s.

We had a simple birthday dinner for my sister today.  We spent very little on the food and presents, but enjoyed the time together immensely. My niece, Alissa, found some candles in the drawer, and lit them up for her mom.

Jake was watching eagerly because he wanted his mom to wish for little toy cars for him when she blew out her candles.  Silly boy!