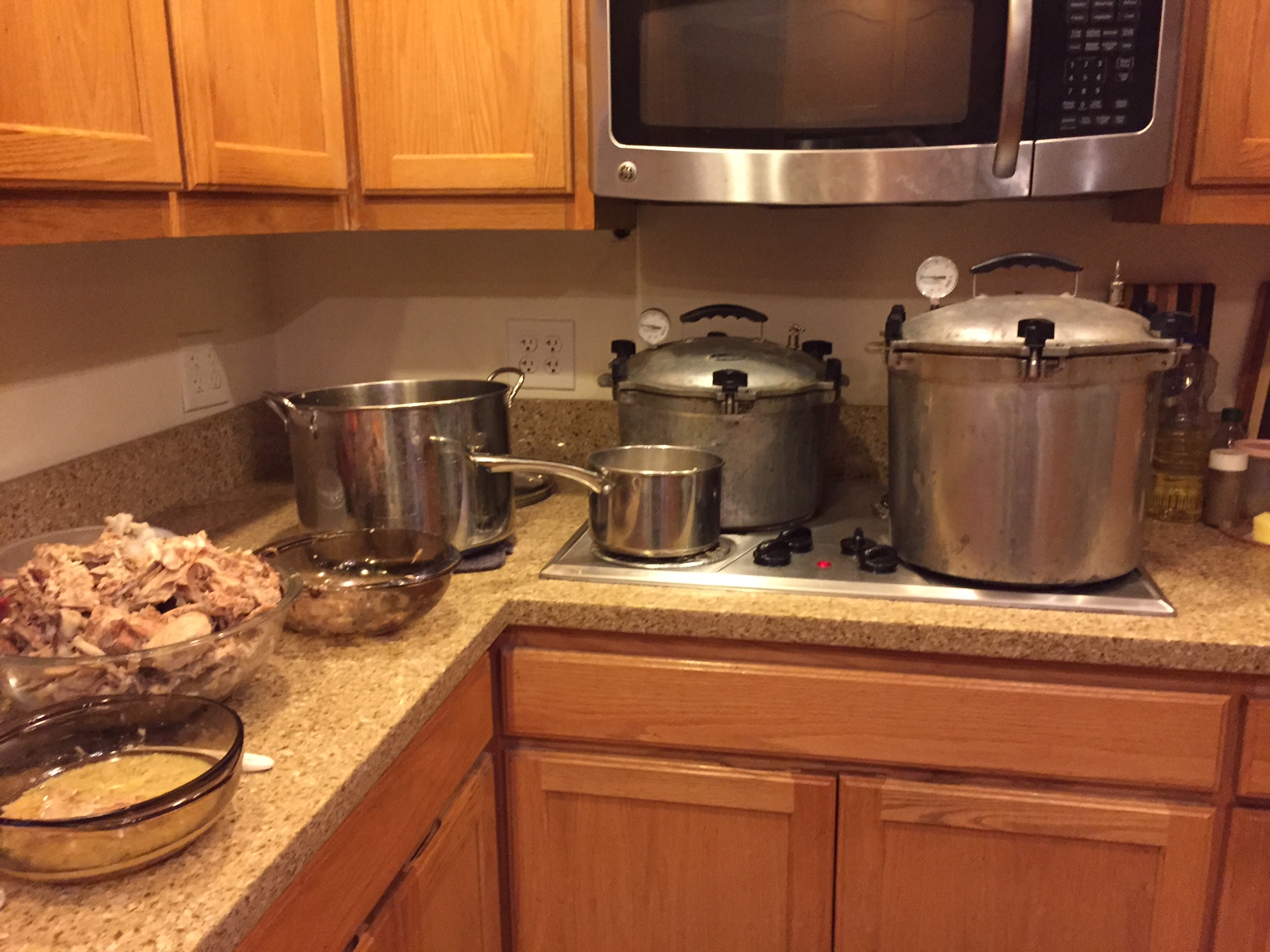 I got busy today and finished using up the turkey bones in my freezer.  Early this morning, I put on 2 huge kettles filled with bones from when we butchered our turkeys last fall.  We had cut a lot of meat off of some of them, and ground it into turkey burger.  I froze many bags of bones, with meat on them.  I let them simmer all day while I sorted, packed and worked on the camper.  Then, after all of our excellent helpers went home, I processed the broth.  I fished out the bones and put them into bowls.  Then, I ladled or poured the broth through a strainer into a large Pyrex measuring pitcher.   I put the broth into jars and canned them  The smaller pressure cooker in the back has 7 quarts in it.  The larger one in the front has 2 layers of pints in it.  There are 10 in there.  More could fit, but that’s the amount of broth I ended up with.  While they were cooking, I picked the meat off of the bones.  I froze 3 bags of good meat, fed the cats lots of “goodies” and had enough broth and meat to make dinner.  I gave my oldest daughter the remaining 2 bags of bones so she could make broth, too, and so that I would be done with that project.

I made turkey a-la-king over rice.  The rice was in the camper and had been for a long time, so I used it up and put fresh out there. 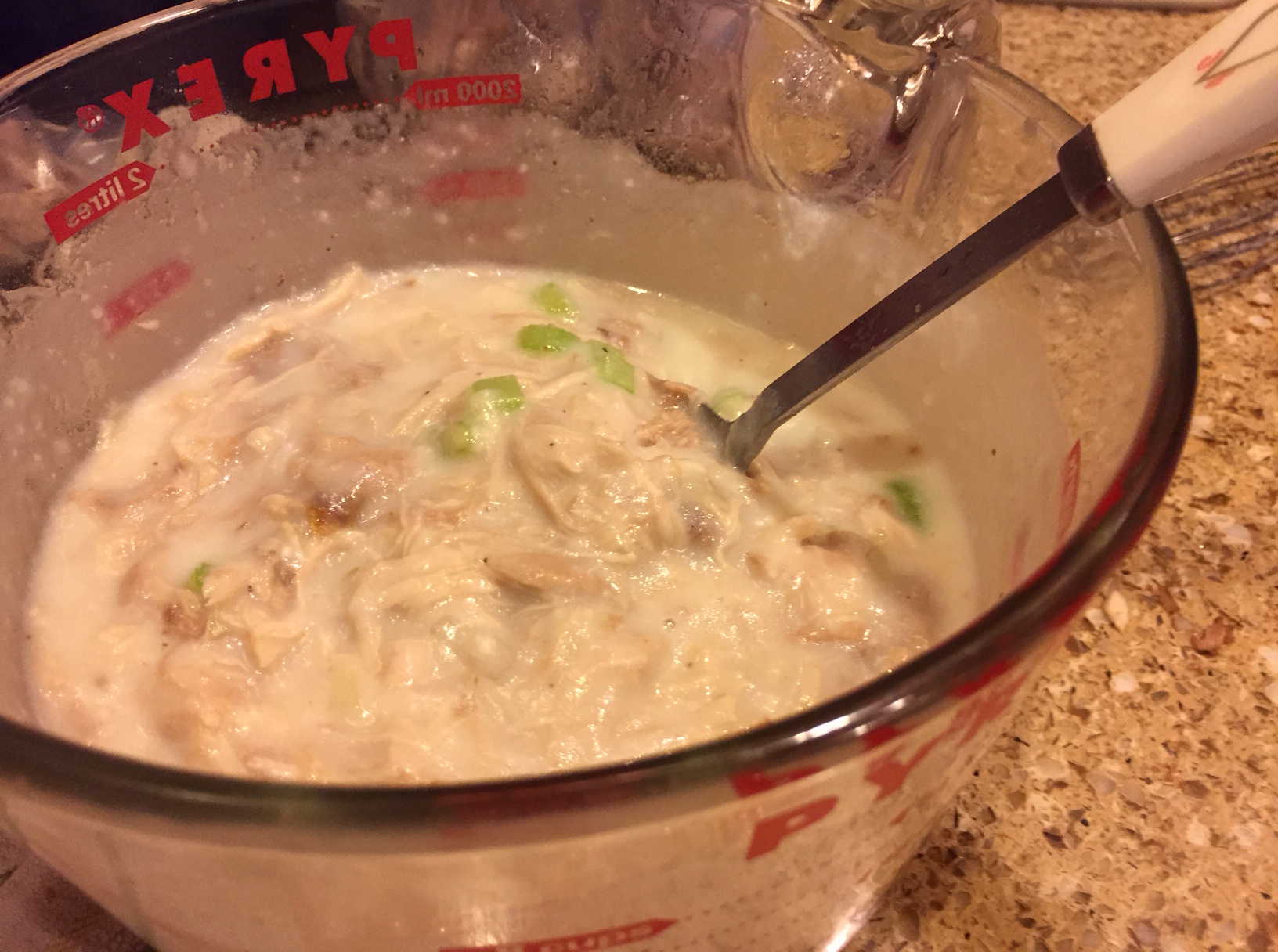 I used some broccoli that was left over from dinner last night.  Rob and I had a delightful evening with some children last evening.  Both of their parents had other places to be, so we spent the evening.  I used every last red potato I had, because I cannot find any baking potatoes around here, although I’m certain I have some. (We are gaining on the project, but the garage is still a train wreck!) I was going to make baked potato bar, but instead, roasted the red potatoes in chunks and served cheese, broccoli, ham (frozen after the last ham we cooked), and sour cream as toppings to put on the chunks.  It worked great, but I overestimated the amount of broccoli.  By far.  I guess the kids have other favorite vegetables.  They were exceedingly polite about it, and probably would have choked some down for my sake, but I told them not to bother.  I was there to spoil them rotten, not insist on them eating broccoli.

Our camper came back on Thursday from being in the shop for 2 months.  There was some warranty work that needed to be done, and a certain part was difficult to obtain, I guess.  We had taken it in right after our camping trip after Christmas when we realized it was leaking (bad seal) into the outdoor kitchen.  I found a large gallon bag of Chex Mix I had made at Christmas time and taken camping.  It was still great and the children polished it off for me as a snack last evening.  There are 6 of them, plus Patsy and Ja’Ana, so it took no time at all to use that up:) They also enjoyed some apples and little cutie oranges and some hazelnuts.  They polished off close to 4 quarts of canned fruit we took, as well.  I love feeding a crowd–very gratifying and fun for me.

Today at noon, I was able to use an enchilada casserole that had been frozen for quite some time, throw away 3 items I found freezer-burned in the freezer, some frozen fruit (peaches, blueberries, wild blackberries, and strawberries) I put frozen into a bowl and let thaw into fruit salad right before lunch so it was still slushy, some ranch dressing mix I made into a dip and served with carrots and celery, and some drinks that had been around a long time when I fed 5 extra men and young adults after they helped all morning.

I used quite a few home-canned items this week, including carrots and green beans I put into a soup when my aunt and sister came to help me Friday.  I also used frozen broth and turkey bits in that soup. I also used some potatoes that had gotten left in the camper since Christmas break and were sprouting. I am using onions almost daily from my garden.  The red ones are starting to want to sprout a bit, but the Copras are still firm as ever, for the most part.  I still have quite a few left out in the shop.

On a non-food note, I threw away a sweater that was worn out.  I also ruined a frying pan by forgetting it on a burner too long and then touched a plastic container with it, melting the plastic onto the bottom of the pan and warping it, so I threw away the pan and the ruined container.  Thankfully, it wasn’t my best one.