I found a recipe in a magazine that looked really good, but was not gluten-free. I spent some time one morning modifying it, and now it is. It turned out really tasty and good, and is another way to use some of the squash I’ve been baking and mashing. Although I did make some cinnamon rolls with this dough, frankly, they came out very ugly. The dough is very soft and they would not form well. They were very soft and delicious, though. 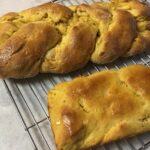 This is a gluten-free sweet dough that can be used for braided bread, cinnamon rolls and more.
Course: Bread
Servings: 16
Calories: 176kcal
Author: Becky

When I formed the braid, I just rolled the dough ropes in flour, then formed. When I was done baking the braid, I brushed the top with butter.

As you can see by the picture of the bread rising, the cinnamon rolls turned out very, very ugly. The dough was simply too soft for them to keep their shape. I will try again with a little more flour another time. However, if I add too much, they will be too dense and dry when baked. So, I plan to keep them as soft as I can, while being able to shape them. The other idea I may try is to just put cinnamon-sugar into the braid and perhaps I will get the same flavor, and the soft texture I want. It will be fun to experiment.