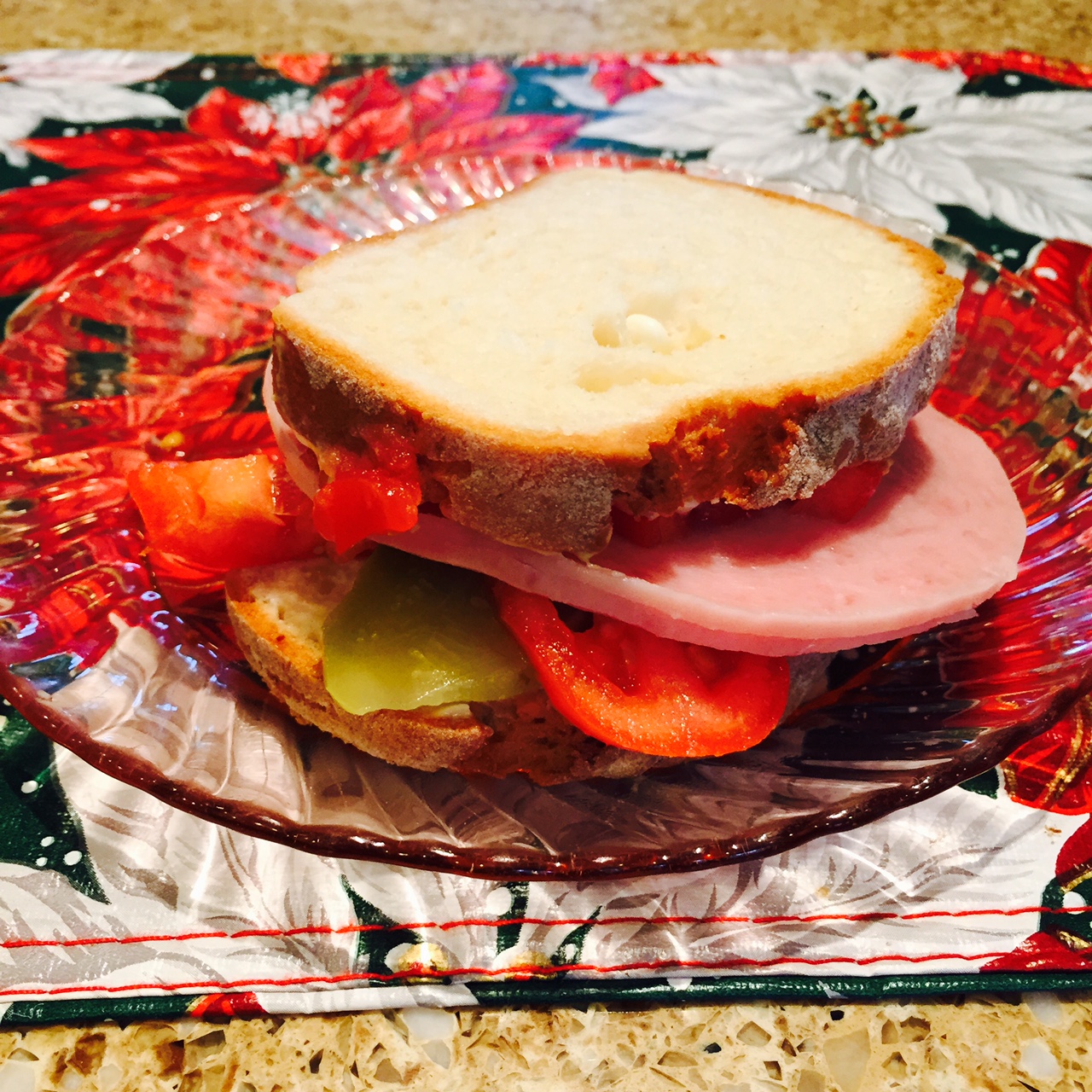 I was very excited to have a garden tomato on my sandwich today for lunch!  This year, we tried (as we have before) to get some tomatoes to ripen in the garage for us to eat during the fall.  We are very excited, because, this year–it worked!

Here, where I live in Oregon, our garden has already succumbed to killing frost.  There is a little Swiss Chard still alive down there, but very little else.  A few herbs have survived in my herb planter box.

In late October, before the killing frost, I picked as many green tomatoes as I could.  I only saved the ones that did not have a bad spot, a bit of blight starting, or any other thing that might make them go bad quickly.

Rob and I tried 2 different methods.  The first method was to wrap each nice green tomato in a white napkin and place them single layer in a box.  We got several good tomatoes from that box over the last few weeks.

The second method was easier.  We simply placed a bunch of green and ripening tomatoes in a cardboard box.  They were mostly Romas and we grabbed the ones that were turning red out of the box as they turned or rotted.  Some were also placed on cookie sheets because we had so many. By now, on December 10, they are looking pretty sad.  All of the ones that are wrapped, and on cookie sheets are either eaten or rotten.  The quality of the tomatoes is going down.  I have to cut out little spots of the “good” ones, and the texture is a little mushier than when truly fresh.  Clearly, I need to clean out this box as well.  I will get the ones that still look good out of there and either compost the rest of feed them to the pigs.  If you look closely, there are still a few good ones in there as well.  I don’t think that the green ones in there are going to ripen, but I’ll give them a few more days.

In our opinion, our experiment was a huge success.  We have had tomatoes for tacos, sandwiches and salads galore, for about 6-8 weeks after  our garden was finished.  I noticed that the Romas are better keepers and that it didn’t seem to make a difference if we wrapped them or not.  This was a good garden year, and there wasn’t much disease on the tomatoes, which helped, I’m sure.  I know this experiment is pretty well finished, but I sure enjoyed my sandwich today, knowing that the tomato I was eating was from my own garden, and that I haven’t had to buy tomatoes for quite a few weeks into the fall.  It was definitely worth the effort.  Success, any way I look at it!

8 thoughts on “Garden Tomatoes in December”