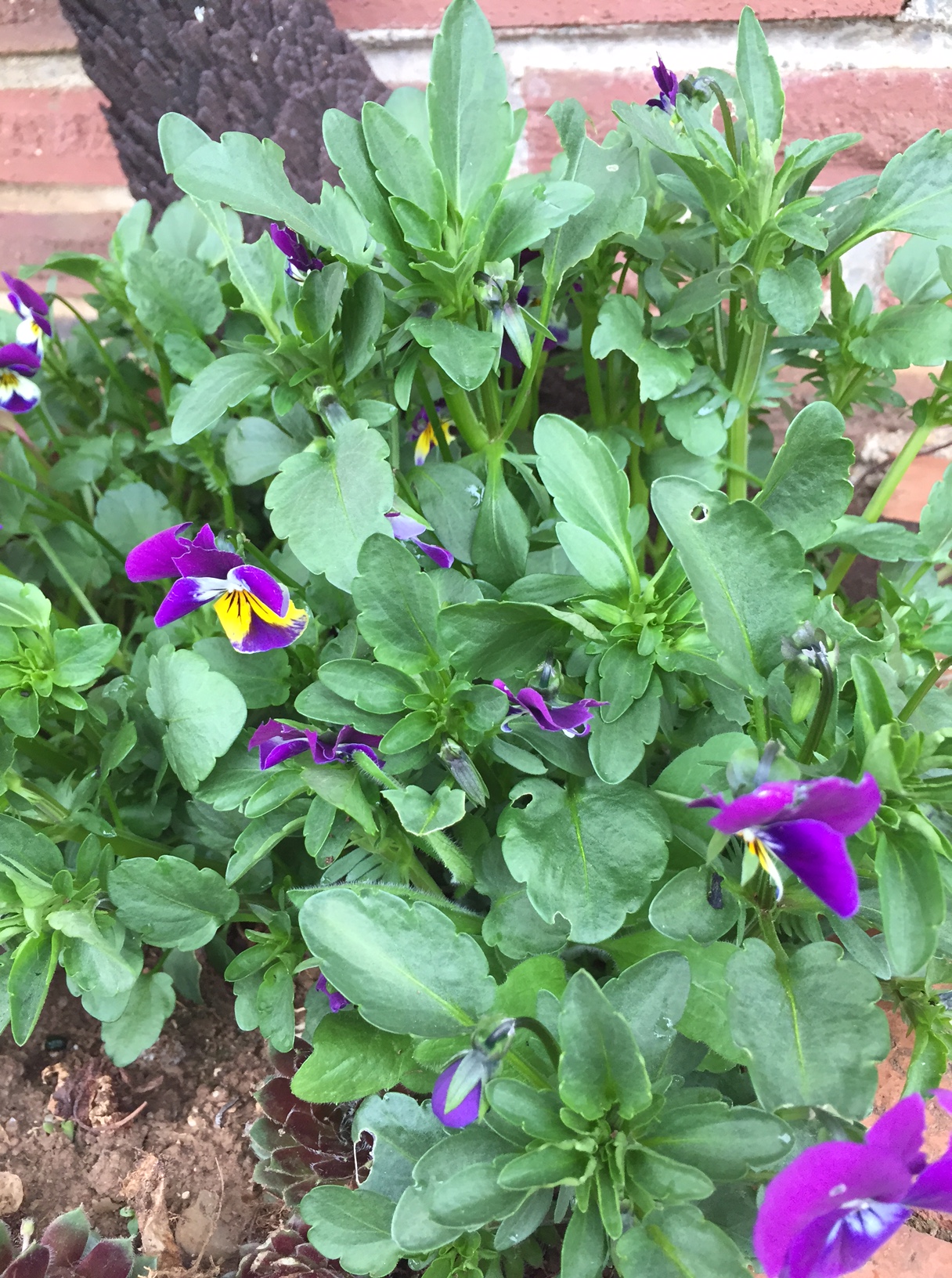 There are little viola plants coming up all over the place–in the flowerbeds, in the yard, even in the cracks of the sidewalk and the gutter next to the sidewalk.  I left this clump of them in the planter box by the door, and they are growing much more lushly than any of the other, probably from the heat of being next to the siding where the sun shines.  Patsy and I also dug up and moved several to better spots so they will add some color once they get growing in their new homes.  We also moved several daffodil plants to better places.   I trimmed things, removed many weeds and moved some other plants around.

Several times, I was able to work outside in the yard and I planted early veggies in the garden this past week before it started raining again.  In fact, there was a very strong wind storm on Friday–what a strange weather year it has been!  Many trees and branches came down around town, but nothing blew away here, except a piece of plywood, 2 sawhorses. some trash, and the lid to the yard debris bin.  All of that was easily put to rights.  4 schools sent kids home, but Rob’s school did not lose power and he worked all day.

Ja’Ana keeps plugging along with her house-cleaning job, earning $24 every Saturday morning.  At this point, she’s just having that money put on her youth group account, and it will pay for camp, activities, etc.  This is going to help our summer budget tremendously.

Lovana is continuing her job, so is home very little, since she occasionally is doing activities on the weekends with her friends.  It’s been nice for her to be able to buy herself some clothes and pay for some college classes that she started on-line this week.  She’s also saving up money. 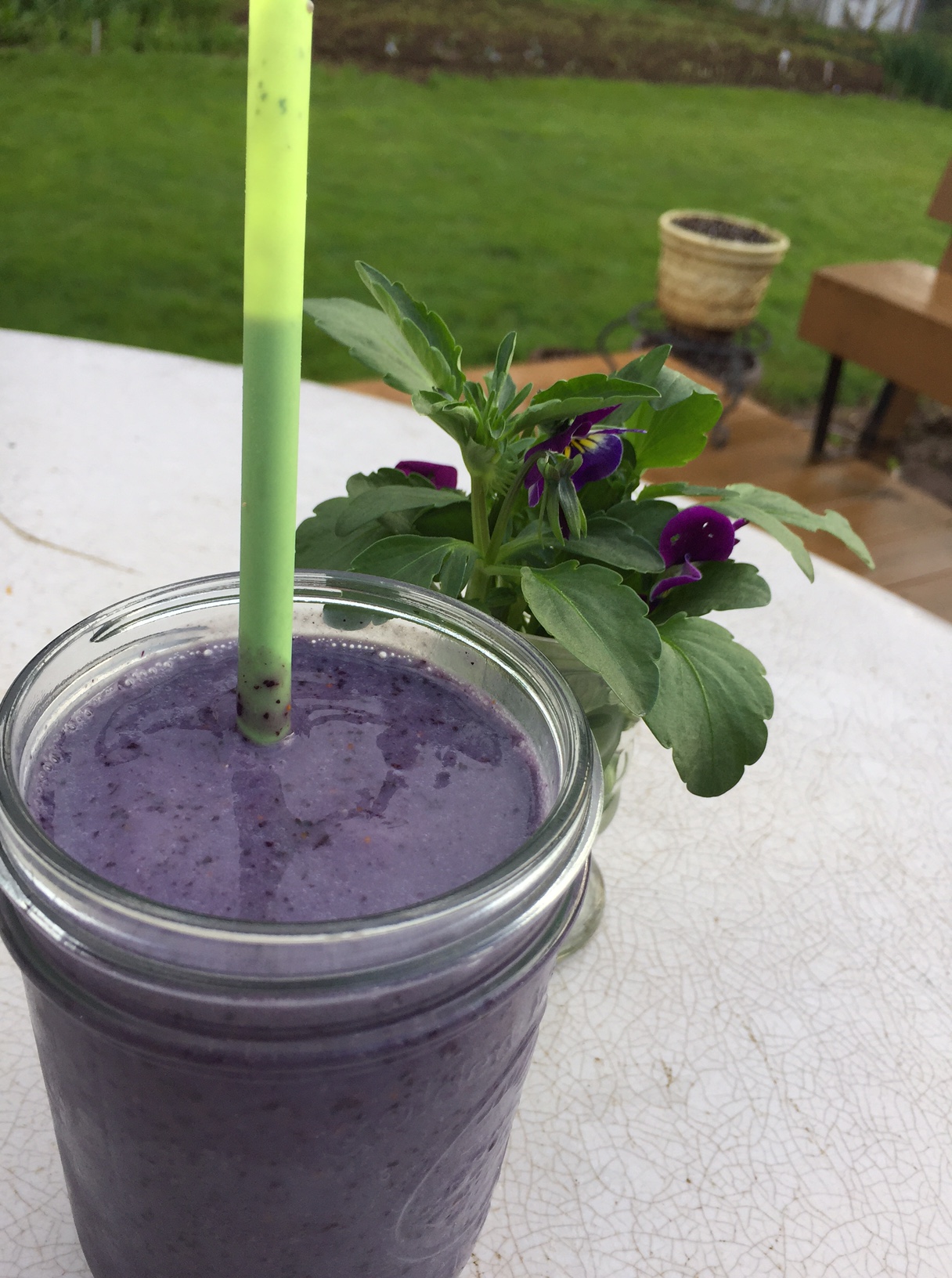 I made blueberry smoothies with some blueberries my Mom gave me.  Ja’Ana made some wonderful turkey-vegetable meatballs, using turkey burger from the turkeys Rob grew back at our old house.  There are still a few packages left.  She made a pesto sauce for noodles to go with it, from pesto I made last summer and froze in an ice cube tray, then popped out into a ziplock bag.  The meatballs were so good, I had her make another batch for the Sunday family dinner.  They are resting in the fridge to be warmed up.

I boiled some beef bones from the freezer and froze the broth for a 4H event that is coming up.  We are going to do a class on outdoor cooking and make stew and some other things.  I’m glad to use some of those bones and free up more space in the freezers for fruits and veggies this summer.

I used Swiss chard and spinach from the garden in a vegetable stir-fry, putting the greens in at the end so they were just wilted. I only used about 2 cups of each, and they shrunk a lot.  I already had carrots, onions, and celery in the pan and used gf soy sauce and a little pesto.  I was surprised on 2 counts: 1)  The soy sauce and pesto tasted good together and 2)The entire family, including the kids ate it without grumping.  The last time I grew Swiss chard, we did not eat it.  It was too strong.  I think that growing this more milder kind has been a good move.

We ate chili, sandwiches, fish, chicken, beans, hot dogs, salads, green beans and garlic, stir fry, celery sticks, and more.  I shopped only for basics and things I ran out of, and used a lot of things from the freezers, shelves, cupboards, etc., and kept the shopping to a minimum.  I didn’t take the kids out for french fries, this week, since a treat ceases to be, a treat if I do it too often.  I did stop in this morning for a 2 lb loaf of cheese for $5.48, milk, and a couple of other things, after seeing a reader board advertising the specials at a store near my house.  I may stop into the same store for another brick of cheese tomorrow since that’s about as low as the price goes around here.

I took Patsy to the library.  I watched Jake for a while today, so I took him, too.  His mom took Alissa to her event.  His dad took Michaela to her horse ranch where she volunteers and rides most Saturdays.  That’s all the parents there were, so Auntie and Uncle got Jake.  He likes the puppets at the library a lot.  He also loves putting money in the parking meters.  I’m hoping to get him used to the library so we can enjoy some of their programs during the summer, when we have lots and lots of time to use up in useful and productive ways that help him grow and develop as a person.  Very few activities beat the library, in my opinion!  So far, I’m pleased at how he’s warmed up to the whole experience over several exposures.  He’s got his mind on baseball right now, and actually had me running around the flowerbed the other day, while I either chased him with a plastic ball, or he chased me, after wildly swinging, and occasionally hitting, the ball with his plastic bat.  It was definitely 3 strikes and you’re out…..when it was me.  When it was him, hmmm…….he wanted how every many tries it took….hmmmmmmm.  Never a dull moment with Jake!  He even recruited Ja’Ana for his game, since we were sadly lacking on team members.  Lots of frugal fun!

Ja’Ana and Alissa are both practicing driving.  Their Driver Ed class started last week.  Ja’Ana has to drive for 50 hours, plus this class,  before she can have her license.   Without the class, it’s 100 hours.  With this class, she can also get a certificate that lets her skip the driving part of the test at the DMV.  She will still have to take the written test there.  Passing this class lowers the insurance cost, too.  I feel like I’ve driven, and driven and driven with her, because it averages out to about 5 hours per week.   Rob has taken his turns, too.  She’s doing great, though and we really want her to pass, so we are doing what we can.  Alissa’s parents are taking her driving as well. So glad they each have 2 parents–we all have all we can do to get this much driving in.  So worth it if it helps them be safe drivers, though!

I’m looking forward to Easter next week–it sure came up quickly this year!  I’ve already got a ham I got on sale and you all know I have potatoes!  So, I already have a good start on the meal.  People will bring things, too, and it will be a great day.