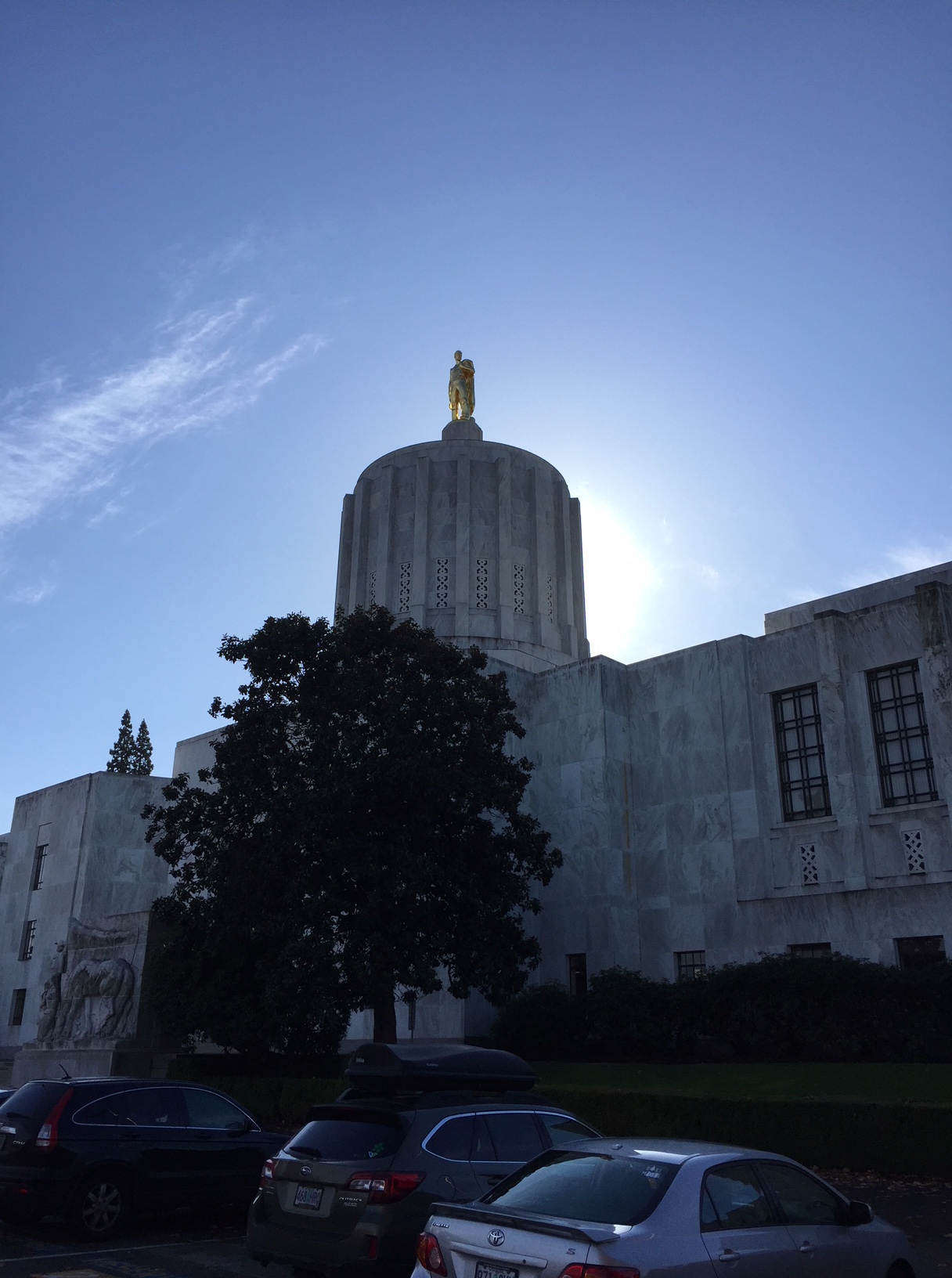 This year, the girls are studying government.  Yesterday, we took a trip to the Oregon State Capitol.  My husband got involved, talked to Rep. Bill Post, followed his instructions,  and contacted his office and made an appointment.  So, at 11 o’clock, the girls and I met with him! This was the best time for him, as he had a little time to spare.  He explained that there is a law requiring them all to be there for 3 days in November, but much official business is not actually being done during these 3 days, so he could carve out the time.  It sure seemed busy around there, to me!  I can only imagine the hubbub during a busy time!  He did tell the girls he had just been in a 3-hour meeting listening to a report on how some group spent their money—very long, he explained, and somewhat tedious, but a regular part of his job. 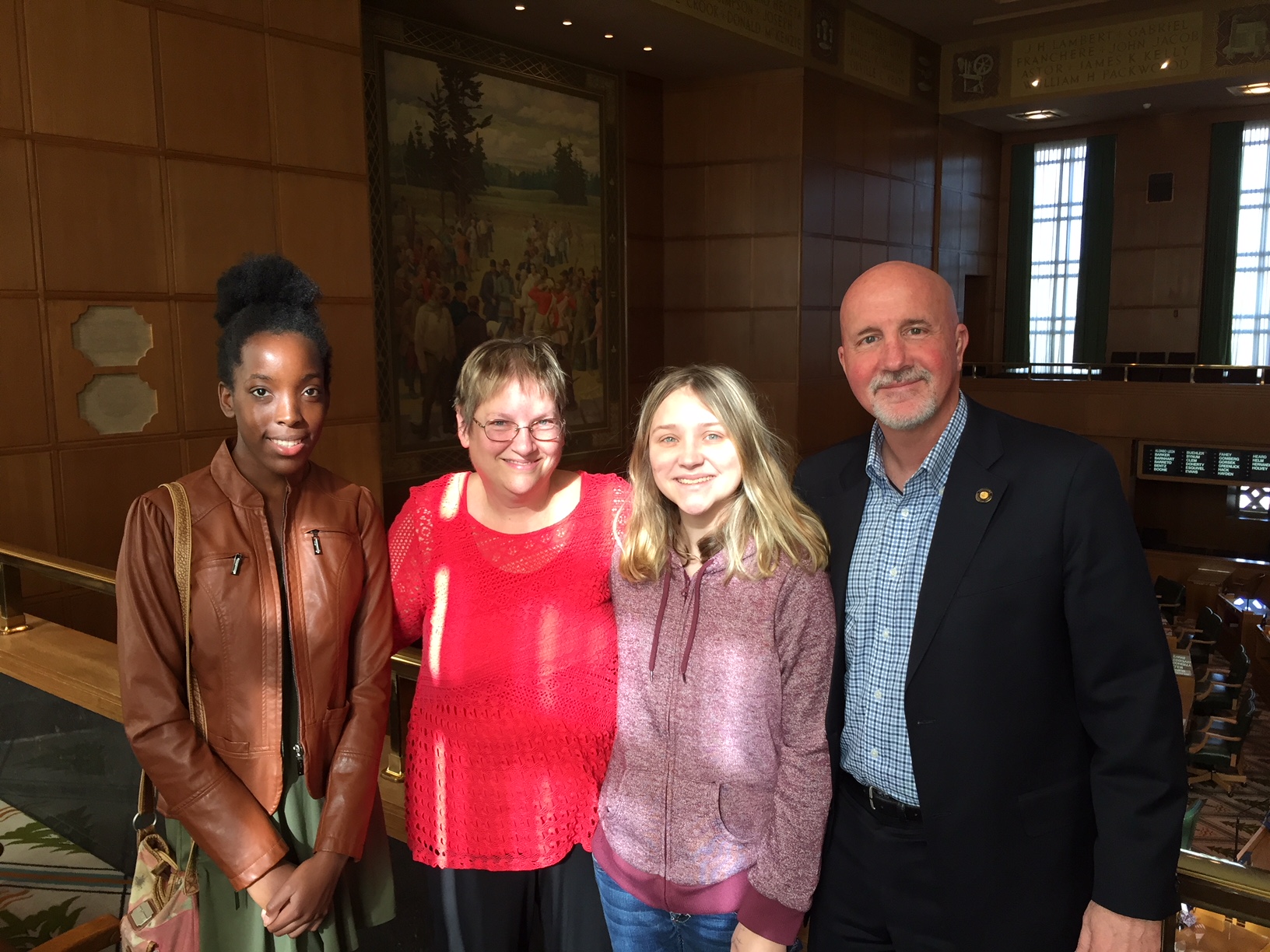 He give the girls a tour of his office, and then showed them the House of Representatives chamber.  We were on a balcony looking down, and he had a friend down below point out his desk.  He explained how he votes for things, and some of the process involved with making a bill a law.  We had been studying this, so it was perfect timing.  He also showed the girls historic pictures of major towns in his district, and a list of all the bills he had introduced, and which ones had passed and failed.  He also told them a little about campaigning, his term of office, and so on.

The girls had prepared a few questions, and they asked them, along with any others that came up.  We found out something very interesting I did not know before!  My niece lives in his district–he is her representative.  BUT, we don’t.  We are on the other side of a line, and we have another representative.  We’ve only lived here a year, and had figured that both of us had the same representative!   You learn something new every day! 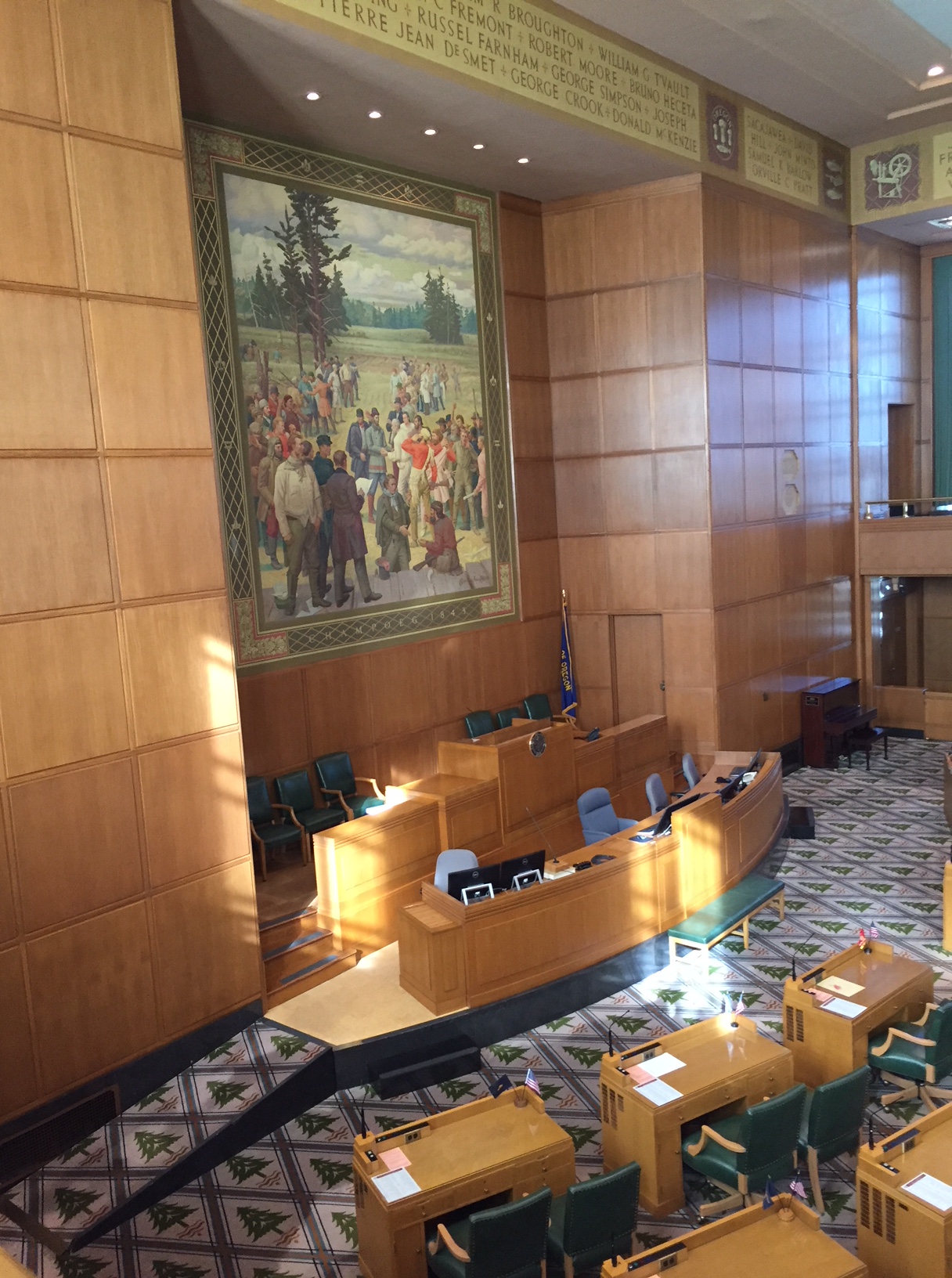 He was very kind and patient with the girls.  We really appreciated that he would spend the time with us, and I know the girls now have a firm, positive memory associated with the state capitol.  At the end of the time he had available, he left us at the governor’s ceremonial office and went on about his business.  We continued to look around. The secretary was very nice to the girls.  She let them in behind the rope to the governor’s office.  They took turns sitting behind the desk. 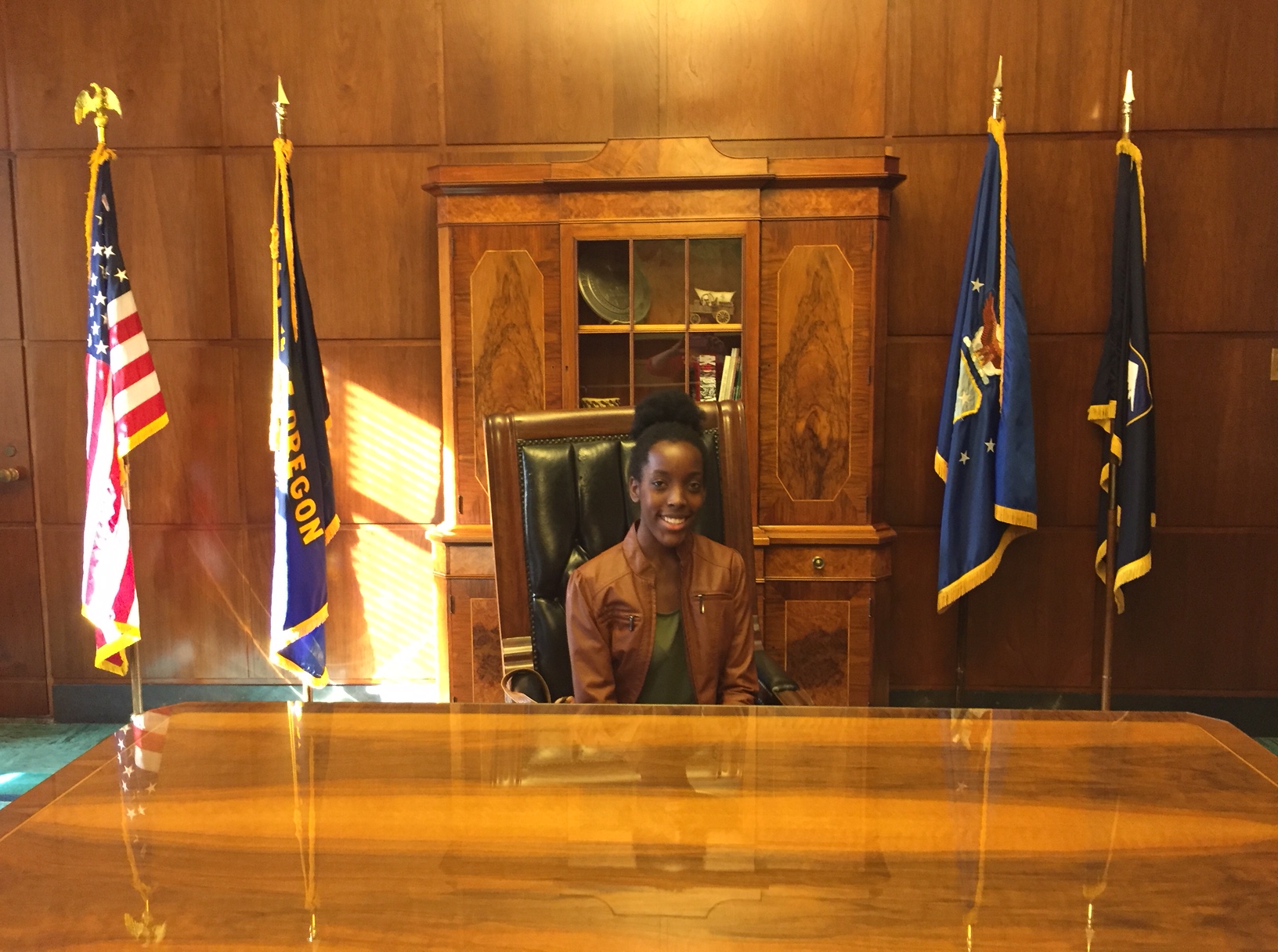 They had a good time!  It was very nice of her, and we felt very special. 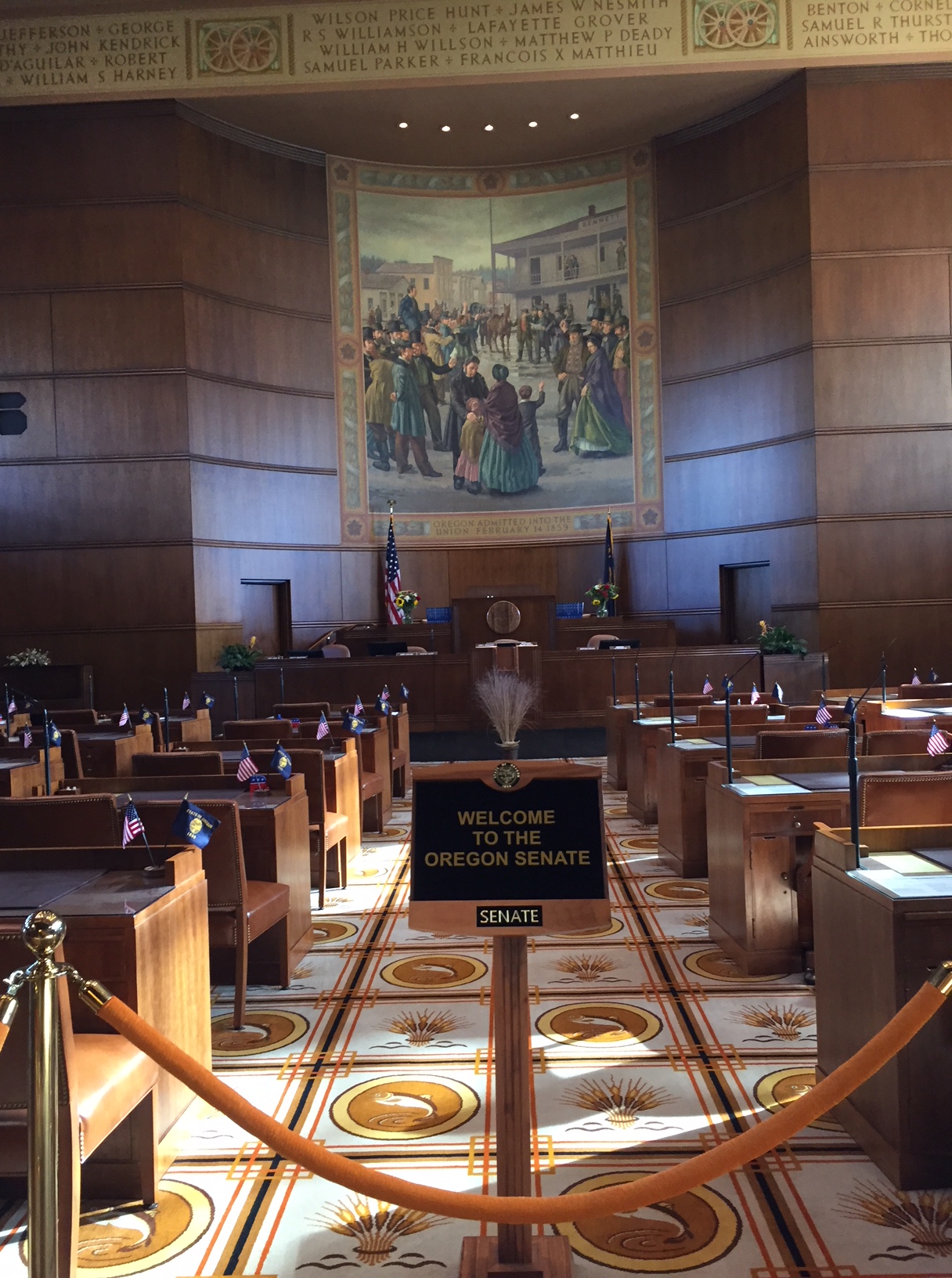 We peeked into the Senate chamber.  We went up stairs and down, looked in the gift shop, admired the old fashioned phone booths, and all the marble and wood fixtures that abounded in the building. 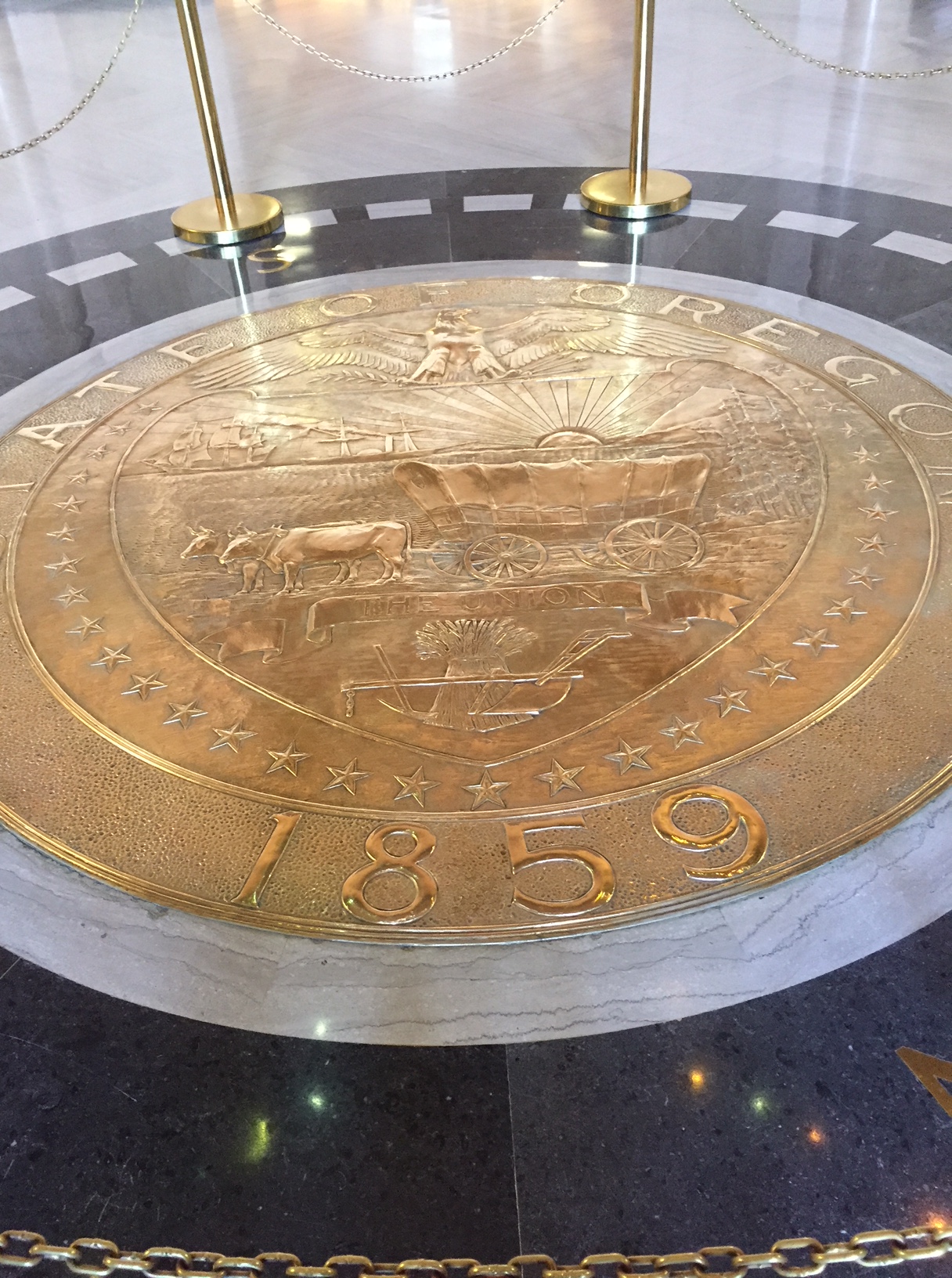 Of course, we viewed the Great Seal of Oregon, imbedded in the floor, and admired the murals painted on the walls.  All in all, it was a perfect field trip!  We have more planned in the future, but I’m sure this one will stick out in their minds for quite a while.