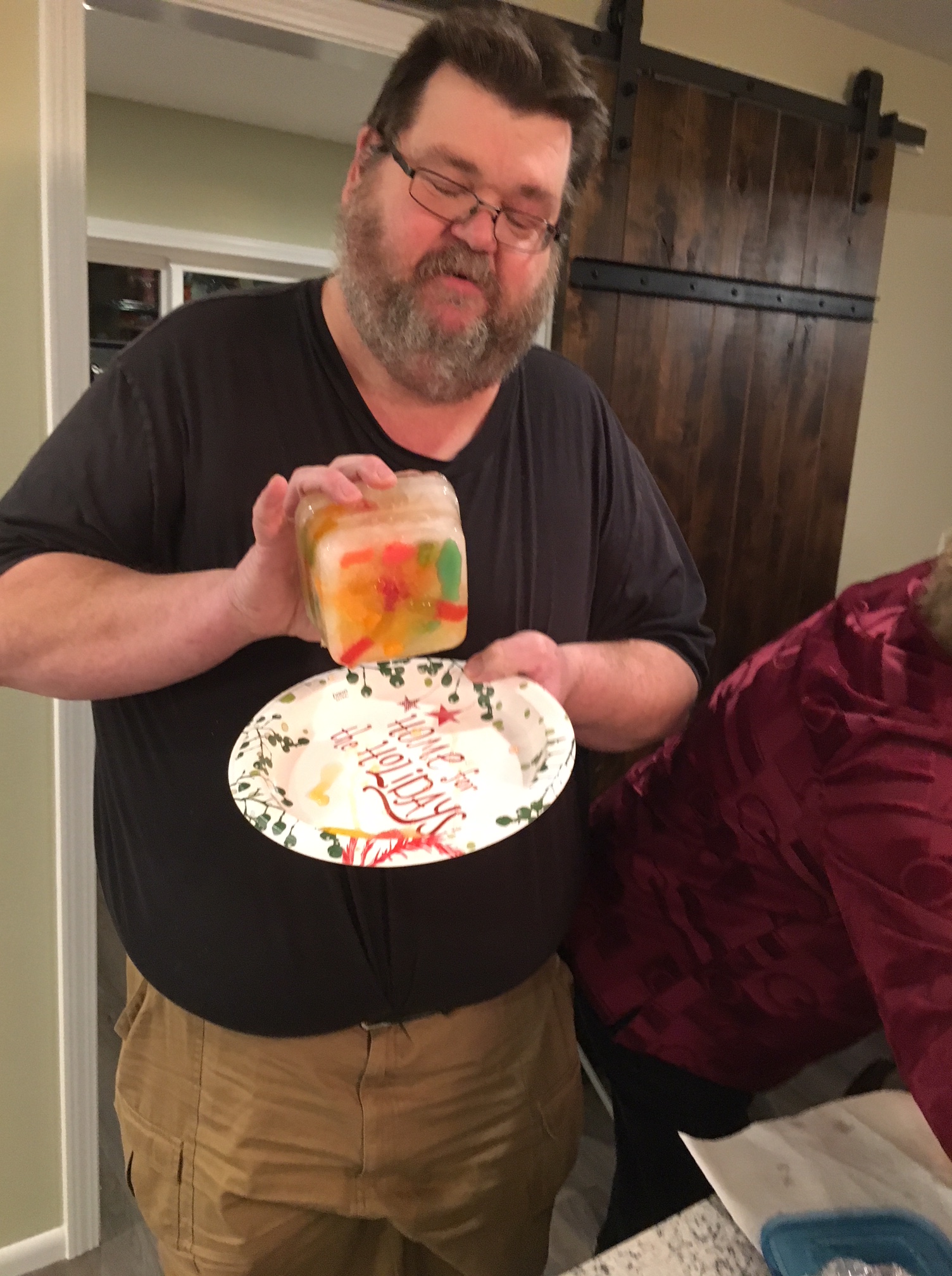 On almost every occasion, Rob finds a way to spice up the gift-giving.  At least one niece or nephew often gets their present wrapped super creatively.  Sometimes he uses duct tape, wooden boxes nailed shut, loads of pennies instead of money, dollar bills taped into a long strip or rolled into a wrapping paper tube, etc.  This year was no exception.  He froze Alissa’s gift card in a block of ice.  It was actually a dummy card-not loaded, in case the water damaged it.  He gave her a new one once she got it out.  To make the joke funnier, unbeknownst to him, my sister and nephew froze HIS gift card in a block of ice infused with gummy fish, since it was a gift card to Cabelas to put towards his fishing license.  Since neither side knew what the other was doing, it was super funny, and there were several good-natured comments such as “payback” and “serves you right.”  🙂 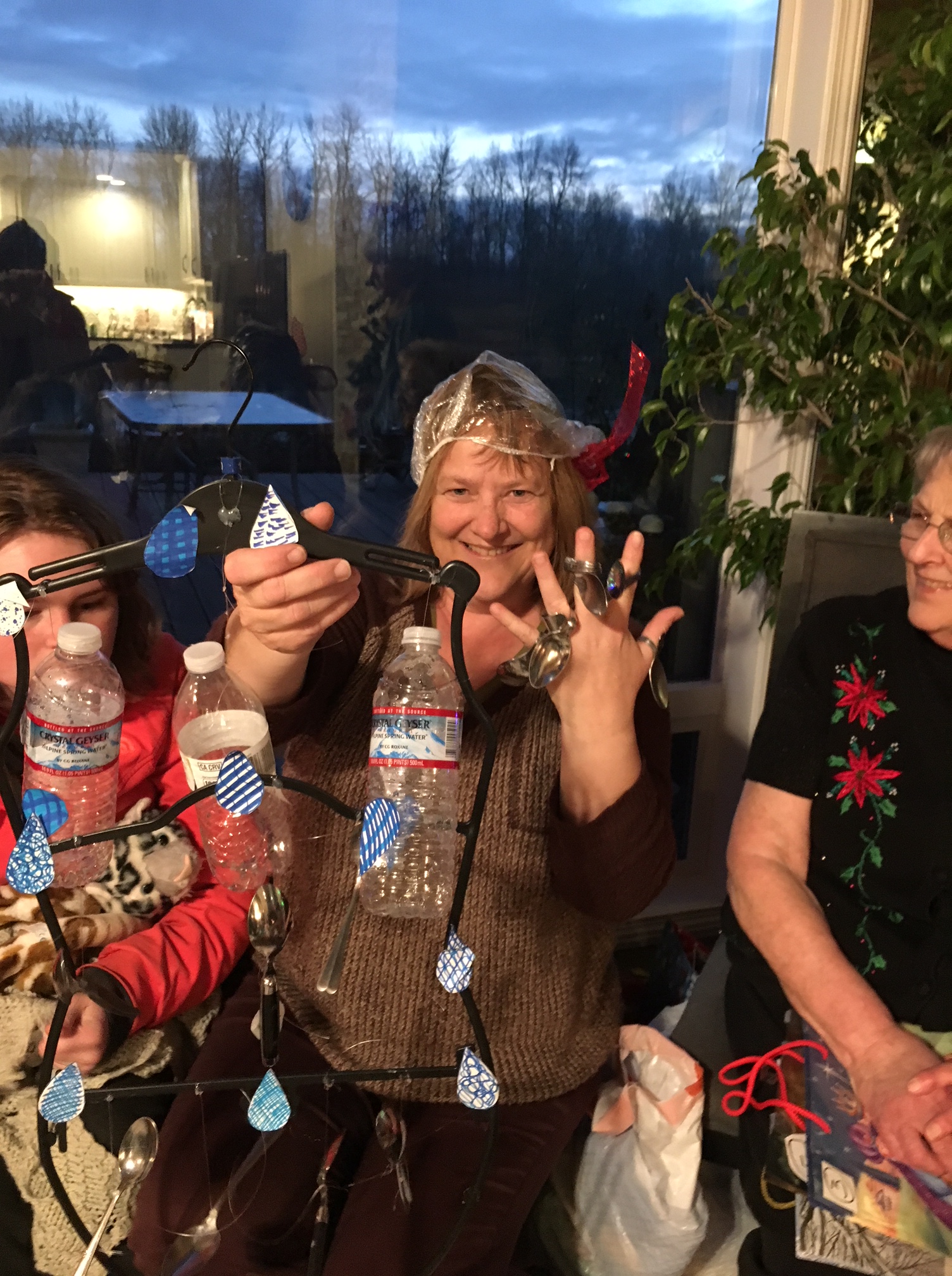 My sister, Gail, never has any spoons in her drawer when we go over there, for various reasons.  So, we did the 12 Spoons of Christmas for her.  Rob rounded up as many spoons as he could find from Goodwill on 2 trips and we finished with plastic ones.  There were 12 labeled, wrapped gifts for her, starting with 1 Spoon for the Christmas Tree.  It was a spoon with a bunch of gaudy decorations glued to it, and a hanger to make it into an ornament.

The 2nd Day was 2 Turtle Spoons.  2 spoons were taped to a package of Turtle candy.

The 3 French spoons were decoratively placed into a French fry sleeve, inserted into floral foam

4 Calling spoons were taped to a very old cell phone.

5 Spoony rings are in the picture.  Rob bent them into rings.  See how well they fit?  So fashionable!

6 spoons a-laying were just 6 spoons taped into a 1/2 egg carton.

7 Spoons a-swimming were dangling from a swim-suit hanger, surrounded by raindrops and empty water bottles.  Of course, there was a shower cap, which my sister immediately put on!  Patsy did a great job drawing the raindrops.

8 Spoons a-milking were 8 spoons taped to a rice milk carton. 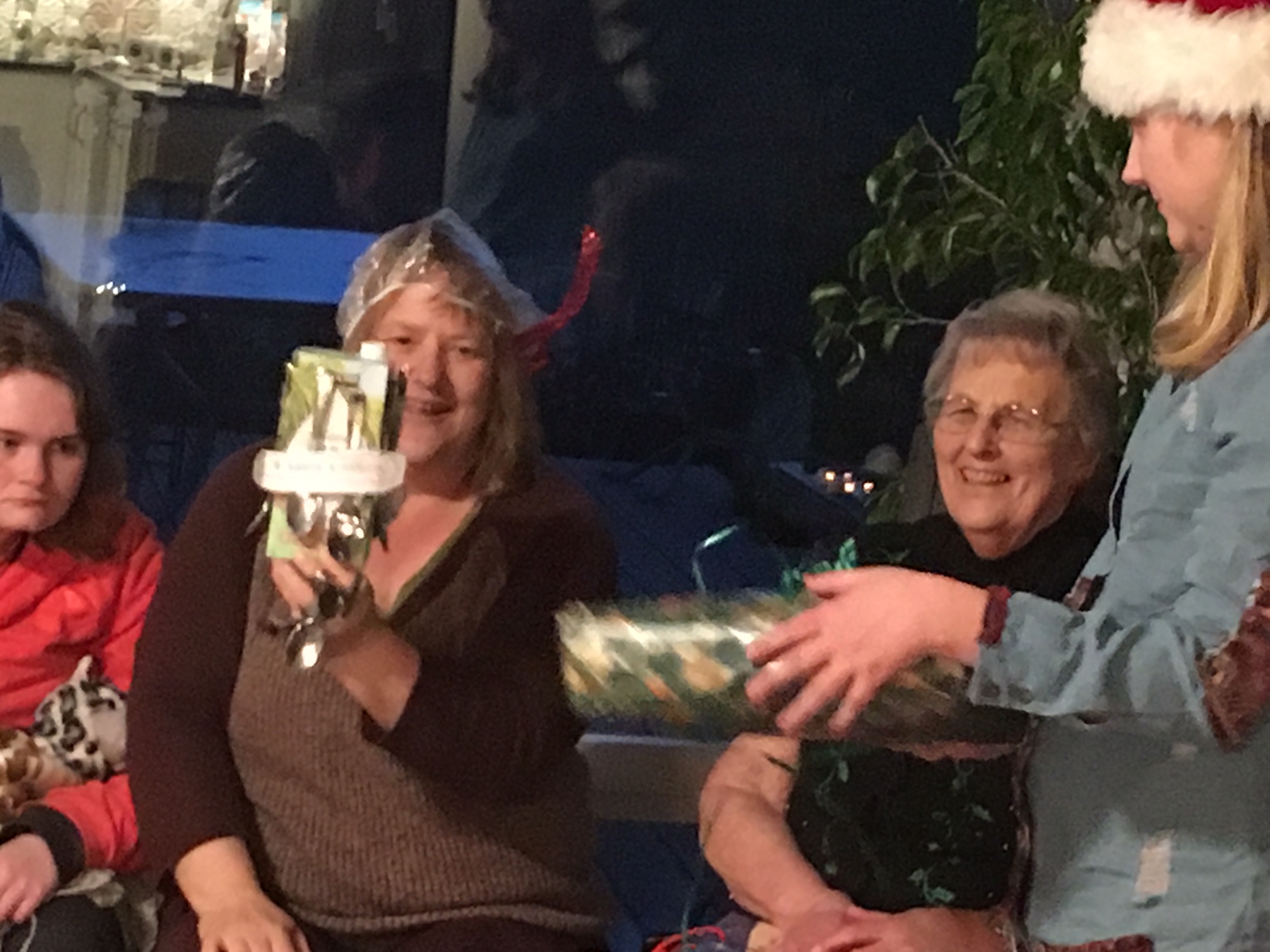 9, 10, and 11 were spoons Pipe-cleanered together for spoons a-piping, Spoons a-leaping (doing the long jump), and spoons a-dancing (a very decorative mobile for their new remodel).  All of these gifts are just awful, of course, and will never be used for decorations:) 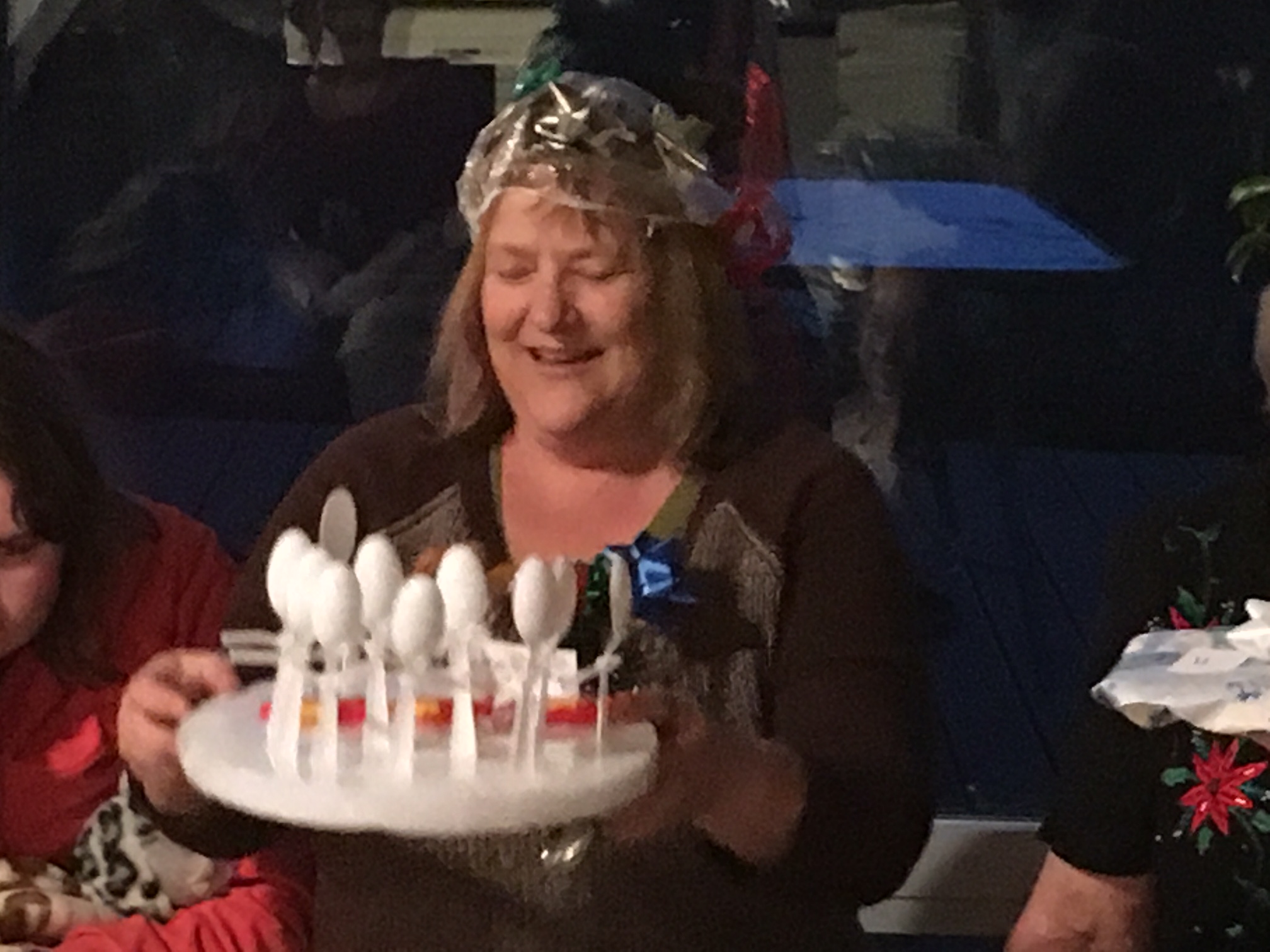 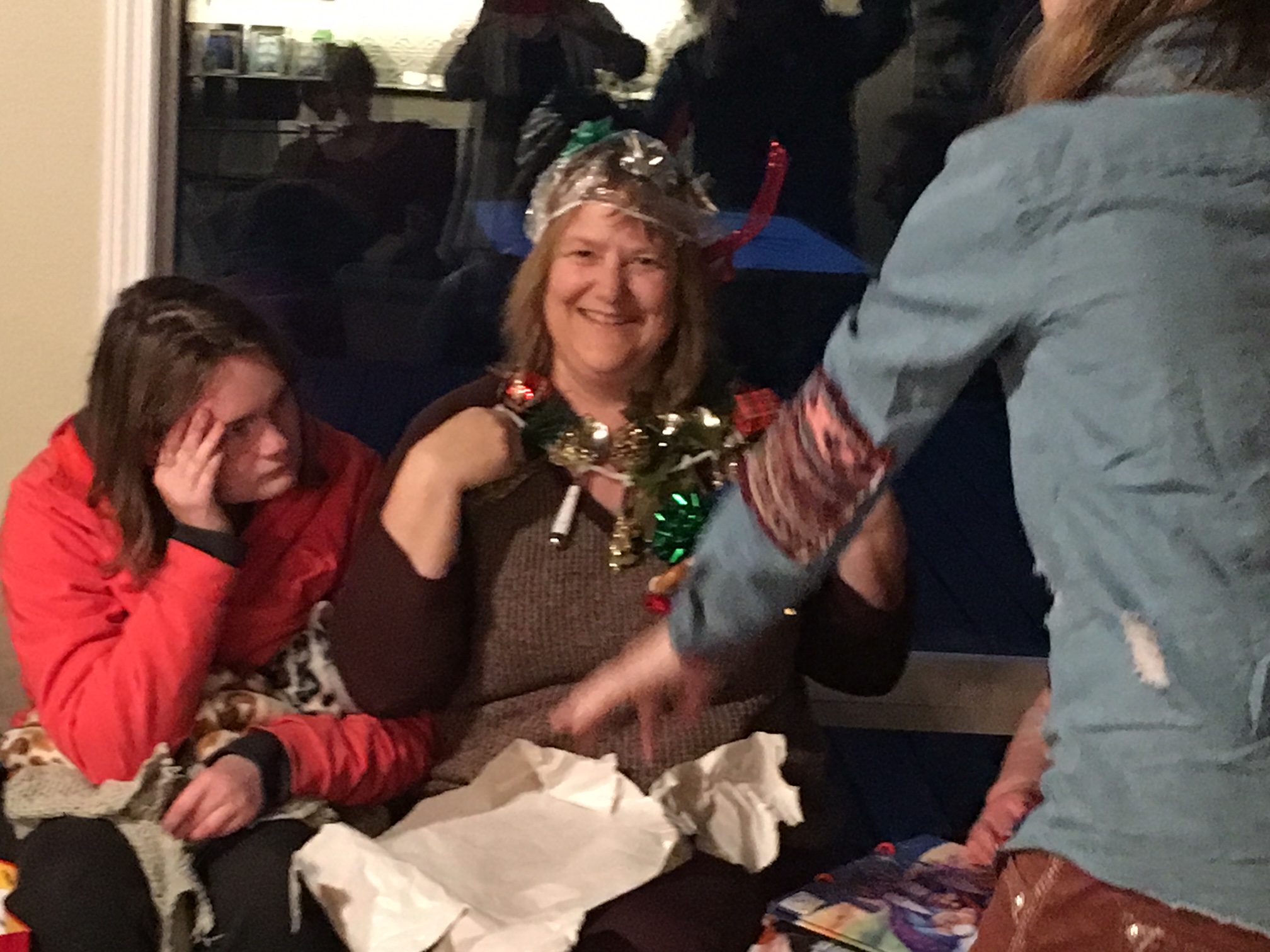 The last one was 12 spoony Hawaiian drummers drumming.  12 spoons were taped to a huge, Costco bag of brown sugar and palm trees and a drum were drawn by Patsy.  This was another joke, because my niece had bought 12 pounds of brown sugar recently, and brought it home to her mom.  It was on sale so she thought she should get several, but that was a lot, so we’ve been joking about how she was going to use up that much!  So we bought her some more:) Everyone was roaring with laughter as she unwrapped each elegantly wrapped gift and she really hammed it up, making it more fun. 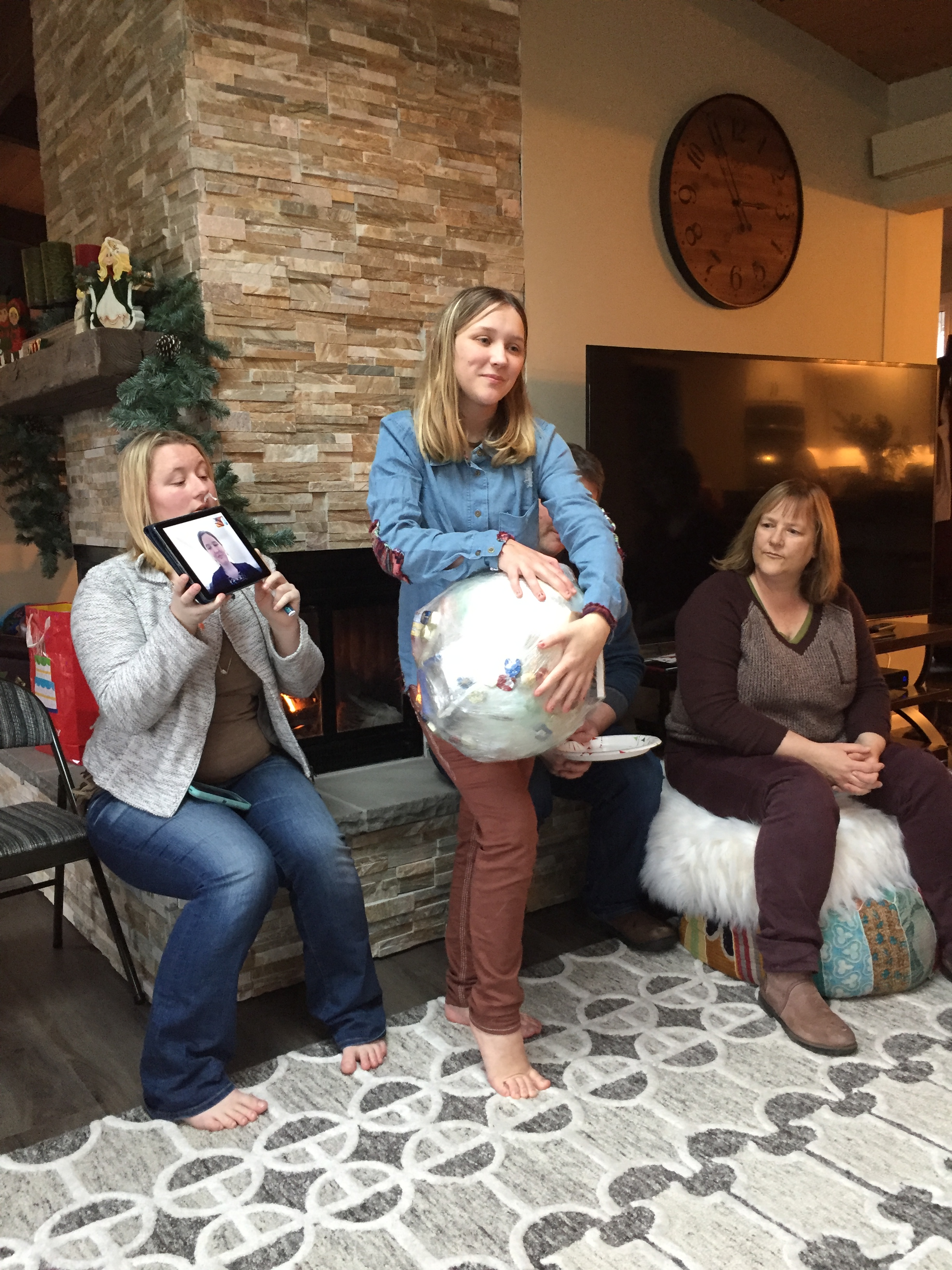 Another fun addition to the party was a Saran Wrap ball game.  This was a twist on the old “unwrap the package” game that we have played for years.  (In that game, you wrap and wrap and wrap a small gift and then people unwrap when the music plays and pass it around when the music is going until someone gets the gift.  Sometimes there are candies in-between the layers that fall out and people get it as well).  This was a little different.  My niece wrapped many, many gifts in many, many yards of plastic wrap, encasing each gift with a few more layers.  The ball was quite large when she finished. The rules were:  The guy in front of you had dice and rolled until he or she got doubles.  You could unwrap the Saran Wrap until the doubles were rolled.  You could not rip, tear, or use a pocketknife.  The ends were hard to find as the wrap had been cut frequently.  So, sometimes it took your whole turn to find an end that could be unwrapped.  When doubles were rolled, you had to pass the ball on for the next guy’s turn.  There were all kinds of goodies my sister and brother-in-law had gathered up.  There were charger cords, dollar bills, candy galore, little flashlights, gum, survival gear, and other super fun prizes.  We had a great time with that, although in the end, after the kids robbed me blind of some of my little prizes, I did end up with a $1 bill to keep:).

You may notice one niece with a tablet.  My niece, Rachel, in Ireland, joined us for the game via Skype!  Caitlyn was sure to take a turn for her frequently.  Technology is so cool sometimes! 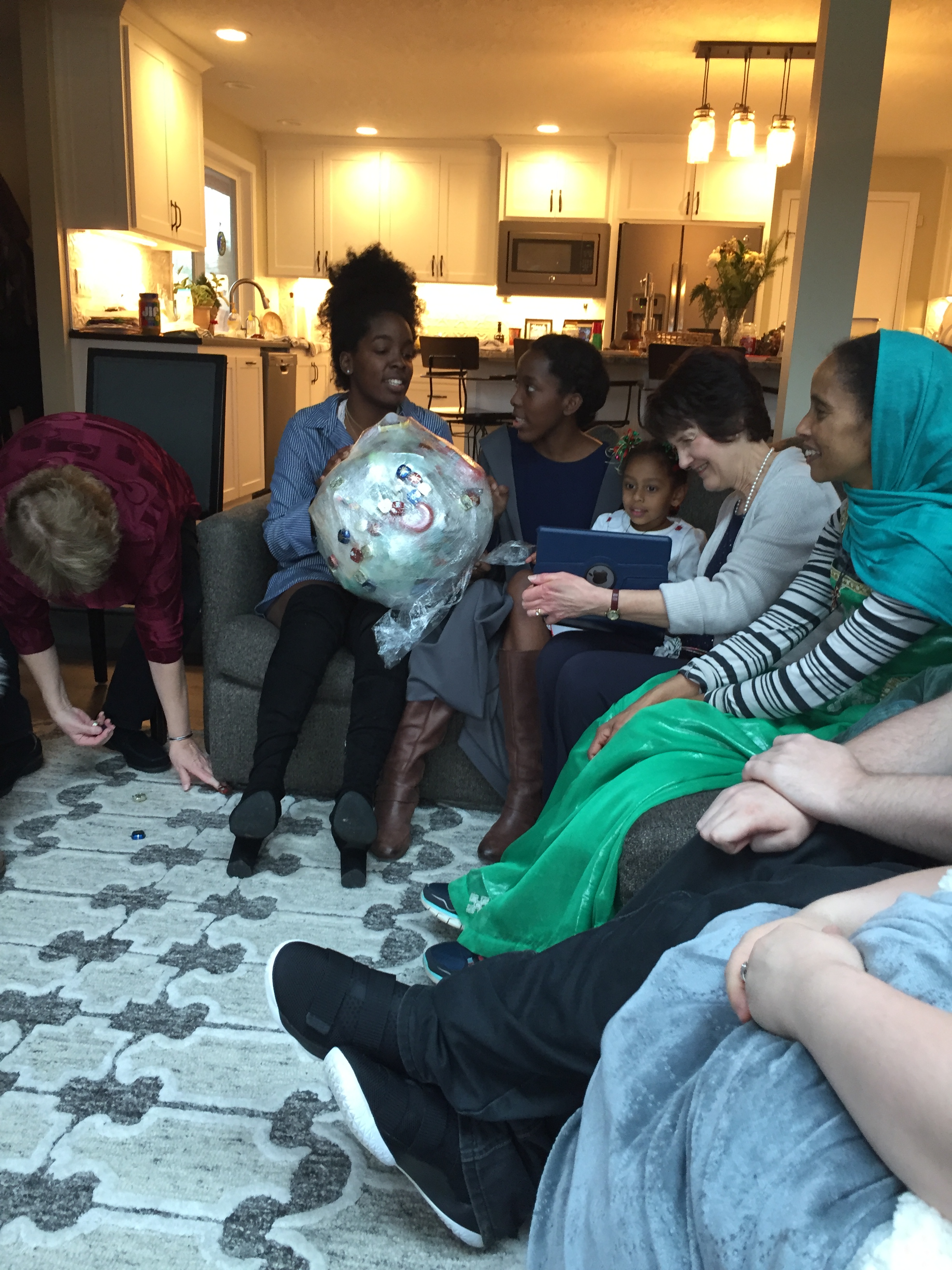 We all gave and received many great gifts this Christmas.  But, I venture to say, the joke ones will remain in our memories for quite a while along with the more “serious” ones.  I will also say that everyone who helped with the joke gifts got as much enjoyment out of thinking them up them as the receiver did getting them, and that’s the best kind of creative gift in my mind–fun all around.

Did you do any creative gift giving this year?  Or do you plan to for upcoming birthdays? We are always open to new ideas, as long as its all good, clean fun and the kids still get the present in the end.  I’d love some new ideas to add to the mixture.