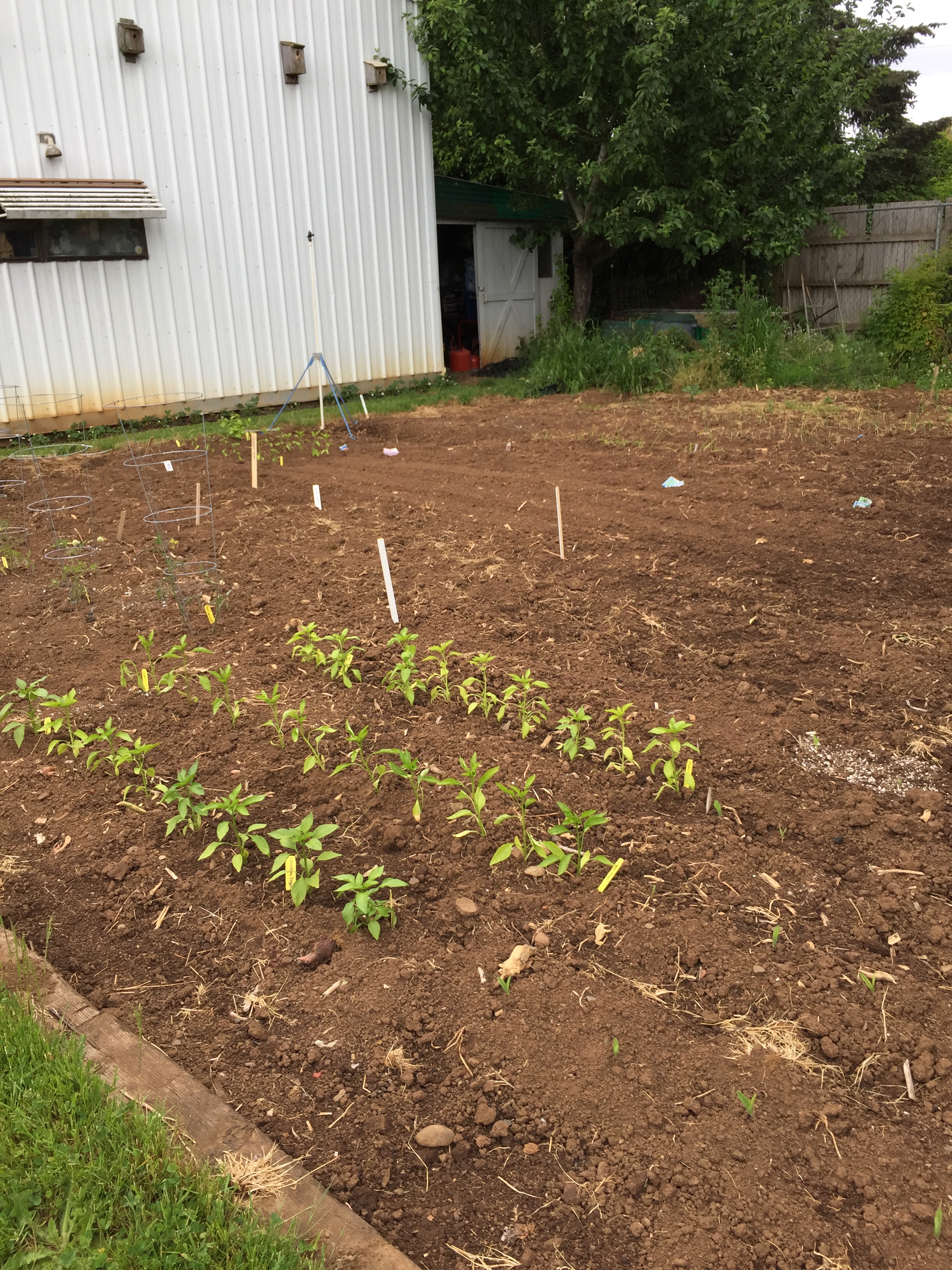 I finally finished planting what needs to be planted right now after work on Monday.  Rob and I worked out there until it was getting dark, with me planting and him getting the sprinklers set up.  We had several other previous sessions where we planted parts of the garden.  It was so good to be finished for a while anyway.  Patsy and I had been hand watering our newly planted rows and starts up until Monday night.  What a relief to have the sprinklers going!

On the lower right hand side, you can see tiny corn plants.  I started them in the greenhouse and set them out.  I’m trying corn for the first time in this garden and am trying an experiment.  Since the area is small, I’ve made small blocks for pollination purposes.  There are 4 extremely short rows, with about 5 or 6 plants in each row.  I bought a corn succession package from Territorial with Sugar Buns, Bodacious and Golden Jubilee.  The idea is that you plant them all on the same day and harvest at different times.  So, these plants are the earliest, Sugar Buns, and there is a small block of each kind in the garden, sown from seeds.  We shall see.  All I want is corn for fresh eating for here and for family Sunday dinners.  My sister often has extra that I freeze.  Last year, her extras came already in little cartons, because she processed it for me!  (Thank you sis!) That was the easiest corn I ever put into the freezer:). We don’t eat a large quantity of frozen corn, but love having some on hand for those times when Rob wants it, which he has several times lately. 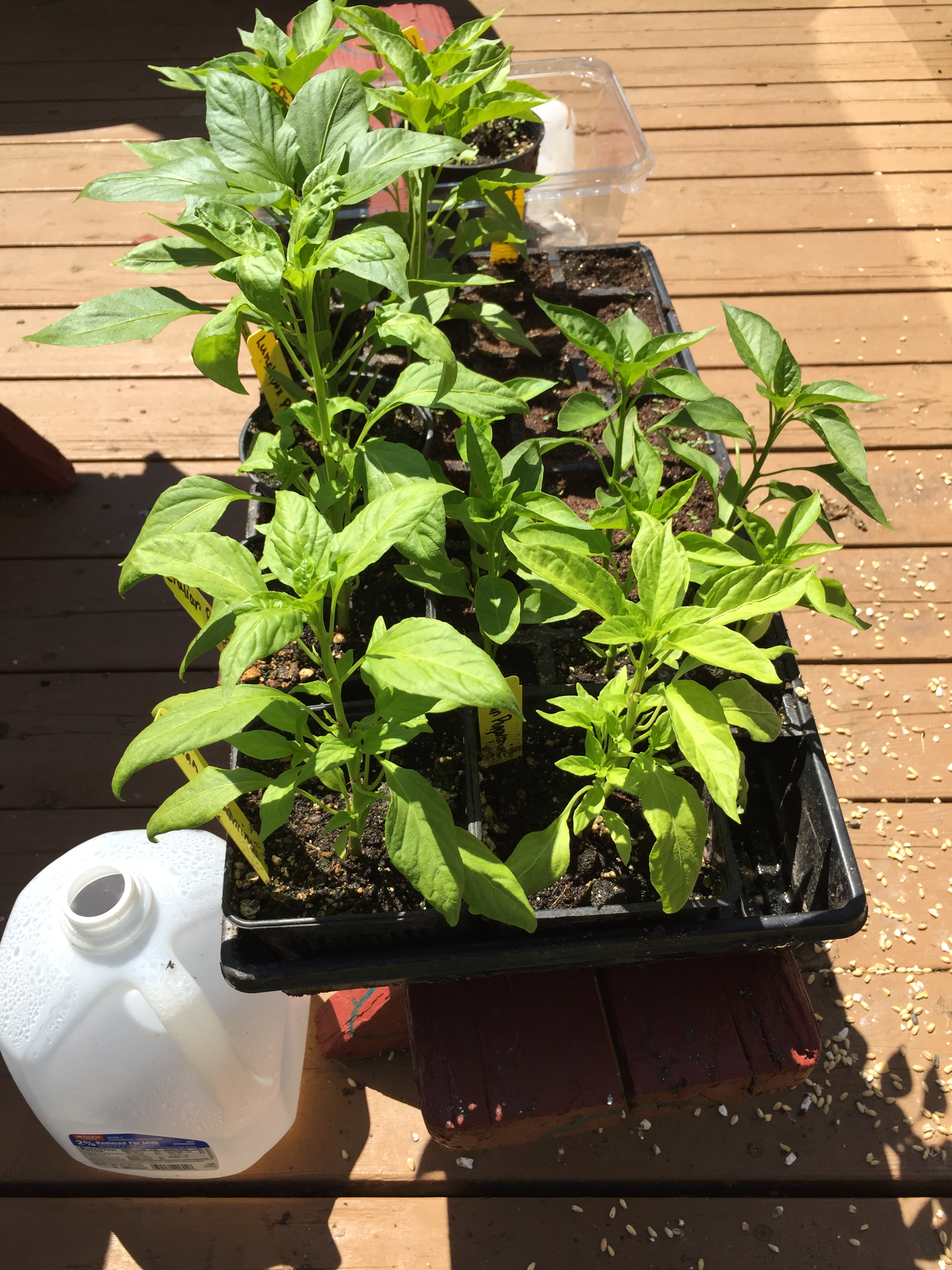 You can see the little pepper plants that we started in the greenhouse.  There is another set of them planted on the far end by the sprinkler.  There are Anaheim 64, Jedi Jalepeno, Serranos (hot for salsa–I need about 5 peppers total for my salsa–whoops), Lunchbox (small red, orange and yellow sweet peppers), Carmen (sweet Italian–long, mild, and will turn red), and Pepperoncini (which are actually long and squiggly and have a tiny little bite).  My peppers did not work well last year.  I’m hoping by moving them around, growing my desired varieties, and fertilizing them, they will do better this year.  I still have a very few frozen ones from 3 summers ago–time to get those used up and new ones frozen! 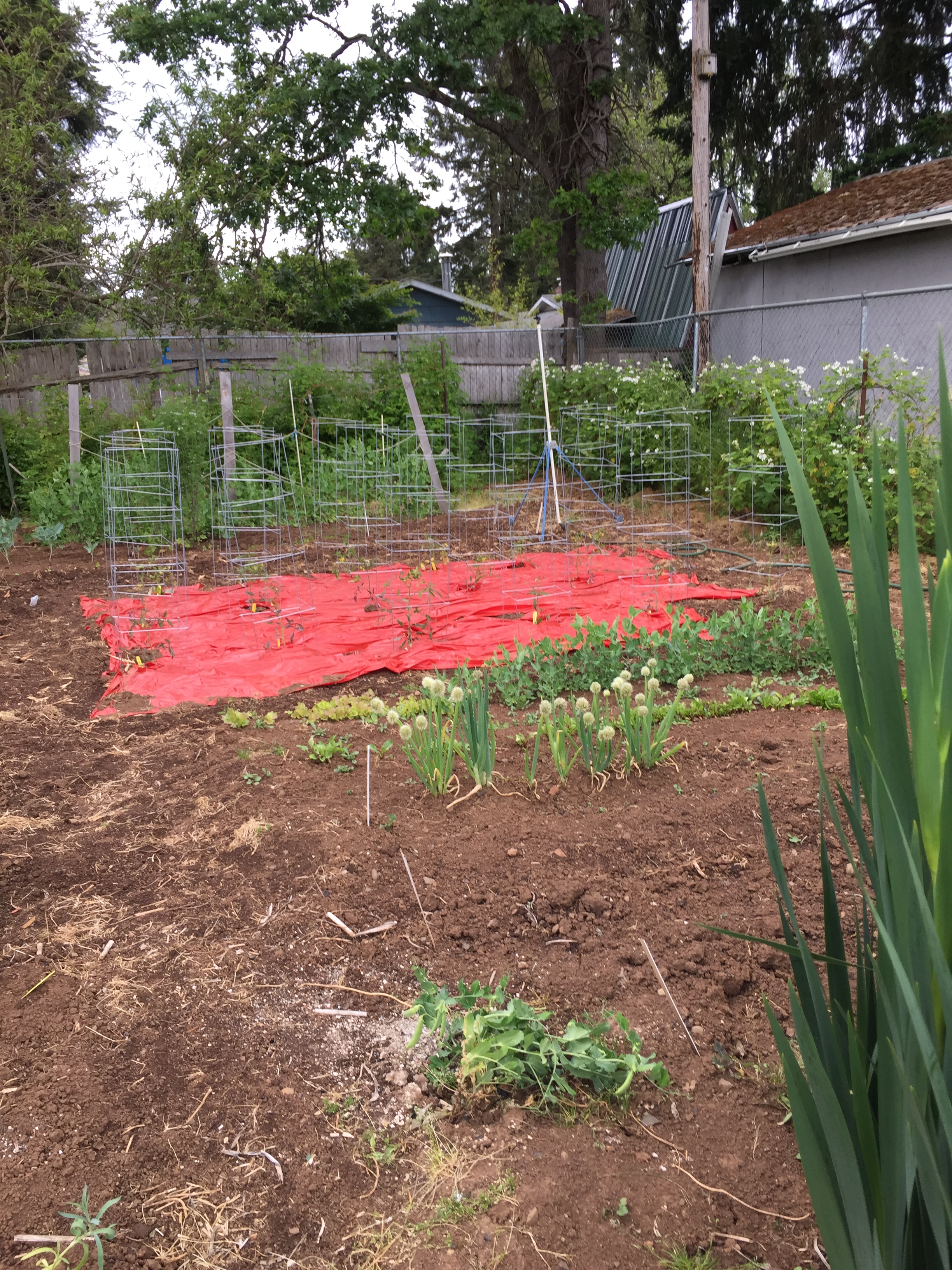 The tomatoes look great with that red mulch. In front of them are Oregon Sugar Pod II snow peas.  I’ve already planted another small planting, as we ate them all summer long last year, in many little plantings.  I’m sure you can see that the lettuce and spinach are growing, and there is more lettuce planted elsewhere already for when we eat this.  I’m letting those green onions go to seed.  I’m having quite a bit of success letting the green onions grow themselves. 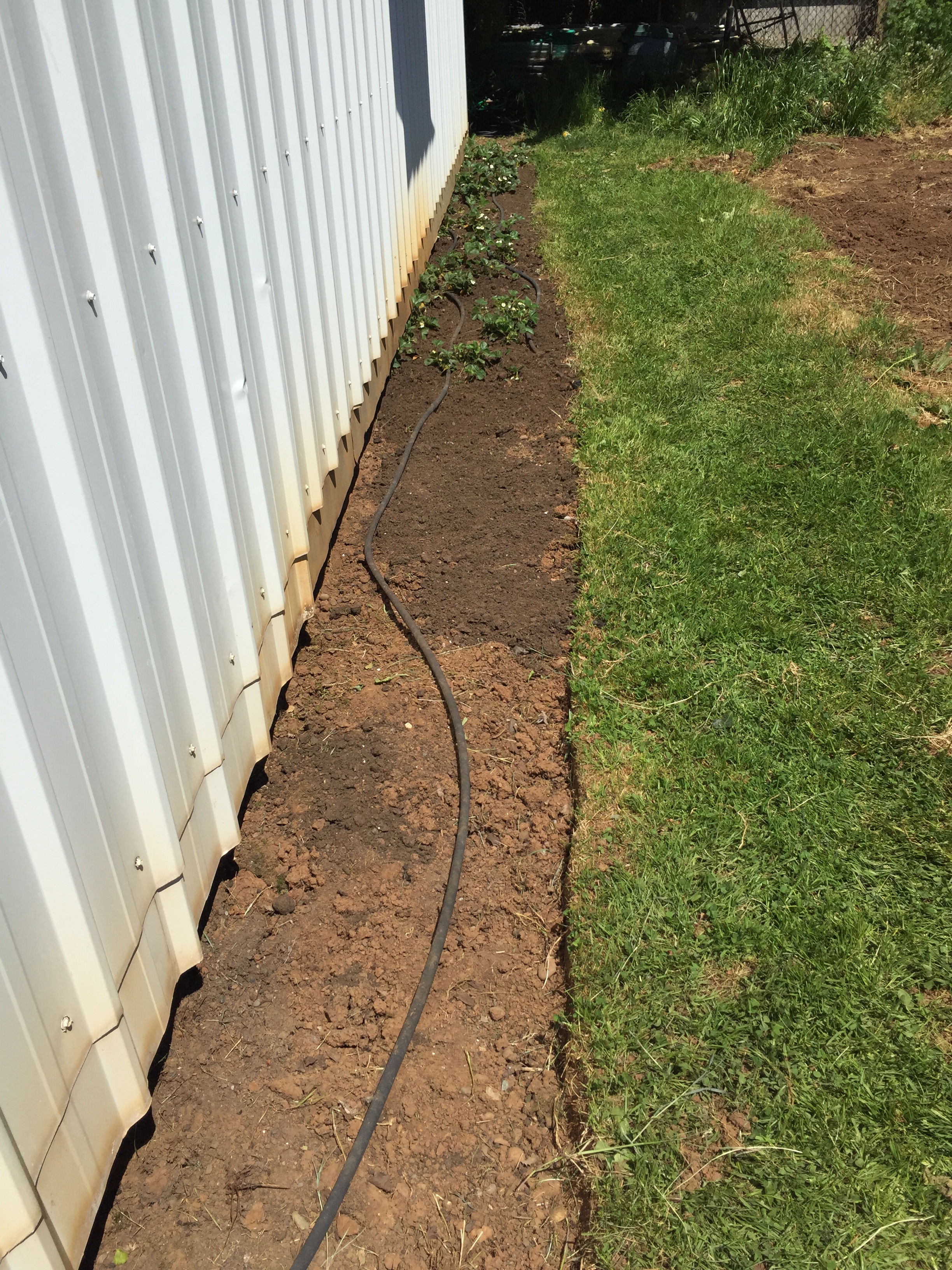 I finally finished the strawberry bed.  I cleaned out the berries I planted last year, tore out the really old ones, and planted bush Delicata squash and zinnias in the blank part. The soaker hose is not up and running as well. 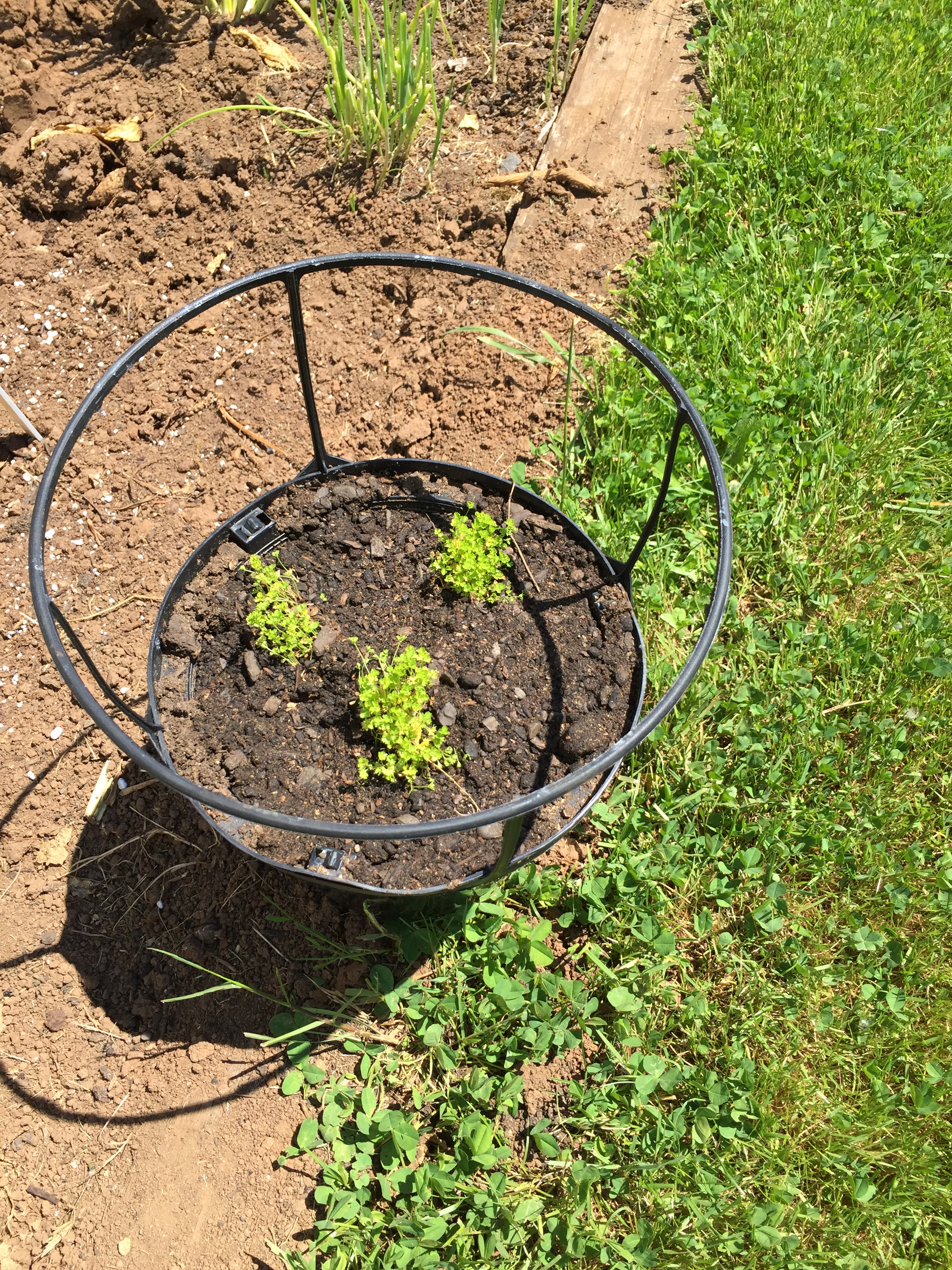 I must have a thousand baby parsley plants that self-seeded in my herb bed.  Patsy potted some up for my sister.  Now there are only 980 left in my herb bed:) 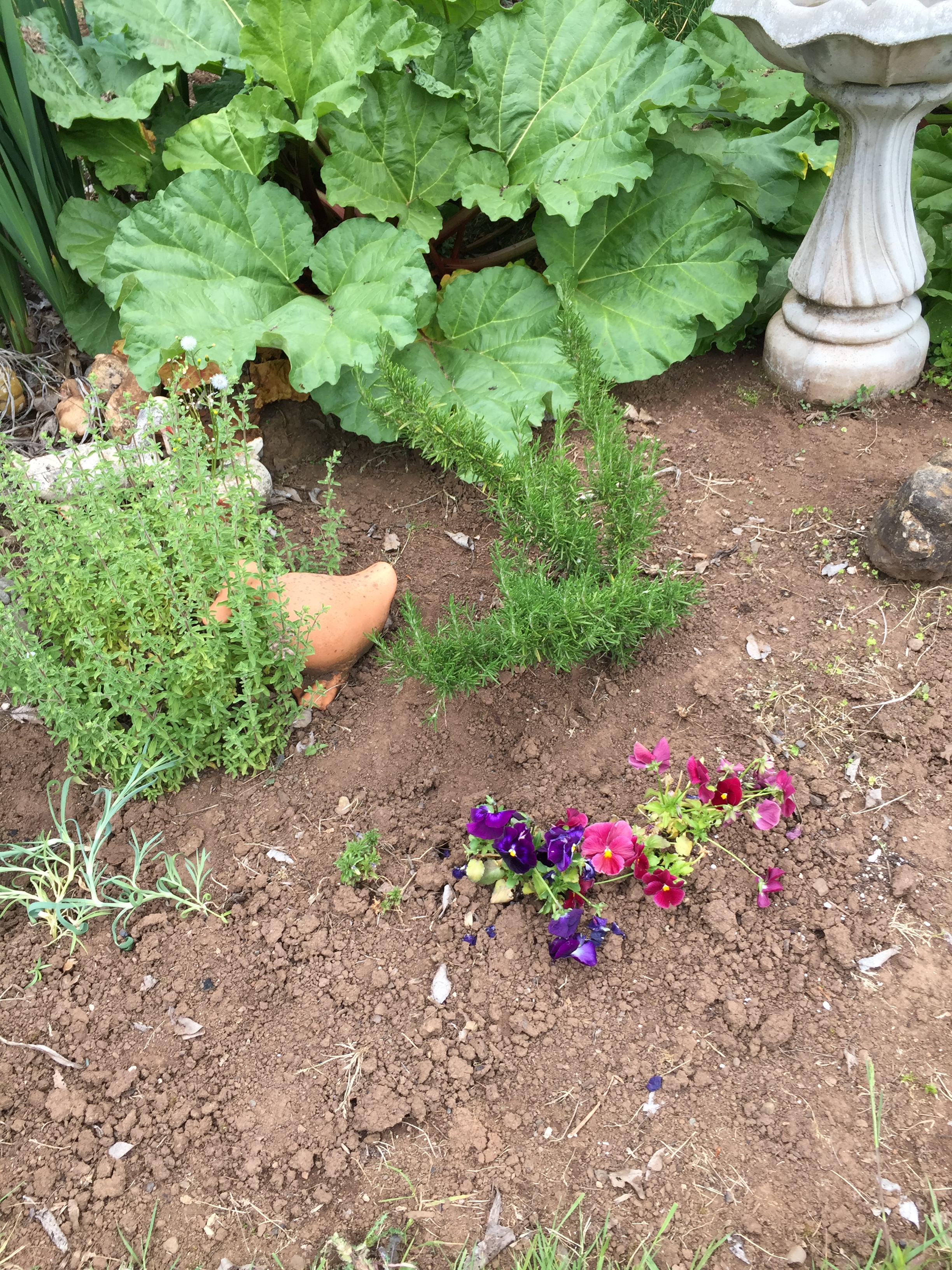 I have nice oregano, rosemary, thyme, sage, and of course, baby parsley growing in front of my rhubarb.  They were planted last year, and came back strong.  I put a few of the clove pinks in front of them.  They were planted from seeds my sister brought back from England.  Also, there is a tiny winter pansy my aunt gave me last year, and I added some other pansies.  On the other side (not pictured), there are chives, mint, and a lot of weeds still.  I did plant some more basil, cilantro, and dill in the garden in rows, and hope to have many, many herbs this summer.

Now I’m waiting for seeds to come up. I’ve planted green and yellow zucchini, pickling cucumbers along with slicing and lemon cucumbers.  There are Winter Luxury Pumpkin and Sweet Meat Squash seeds in their hills, along with many other seeds waiting to sprout.  The onions, tomatoes, and peppers are from starts. There are some potatoes coming up, some that I planted, and some volunteers from last summer.  The compost heap has potatoes and cilantro growing like crazy on the edge of it. It was no easy task to get everything fitted in that I wanted.  At our old house, Rob always used to just go till up another area for me to plant when I ran out of room.  We don’t have that option here.It helped to not have to make space for too many beans this year.  I kind of overdid the beans last year, but will succession plant enough to eat them all summer.  I may not have to can any this year.  I will count the leftover jars when the plants are bigger, because we will keep eating the canned ones until then.  There is still a small blank space for watermelon, cantaloupe and future small plantings of lettuce, snow peas, and bush beans.

The melons are in the greenhouse, getting a little more size before I plant them out.  I am going to try the green mulch with them.  I’m not going to on the zucchini.  Sometimes, you just don’t need or want a bumper crop of that!

I will re-plant any areas that open up as the summer progresses.  I always grow a new batch of zucchini and cucumber plants for fall, along with some other things like greens, boc choi, beets, and snow peas, perhaps.  It’s kind of what I’m in the mood for, have seeds leftover for, and can find space for in July and August.

The blue berries are blooming and forming small berries. So are the raspberries and Marion berries. The artichokes have been giving me a few artichokes, which I love.  The peach tree has little fuzzy peaches on it.  There is a head of leaf lettuce that I will cut this week from a volunteer plant, which I had tiller man go around.

It’s a time of promise.  The seeds and plants are in and the weeds have not started to grow around them yet.  So, I’m planning to bask in that feeling for at least a week and just keep turning on that automatic sprinkler system:). I will turn my attention to flowerbeds next.