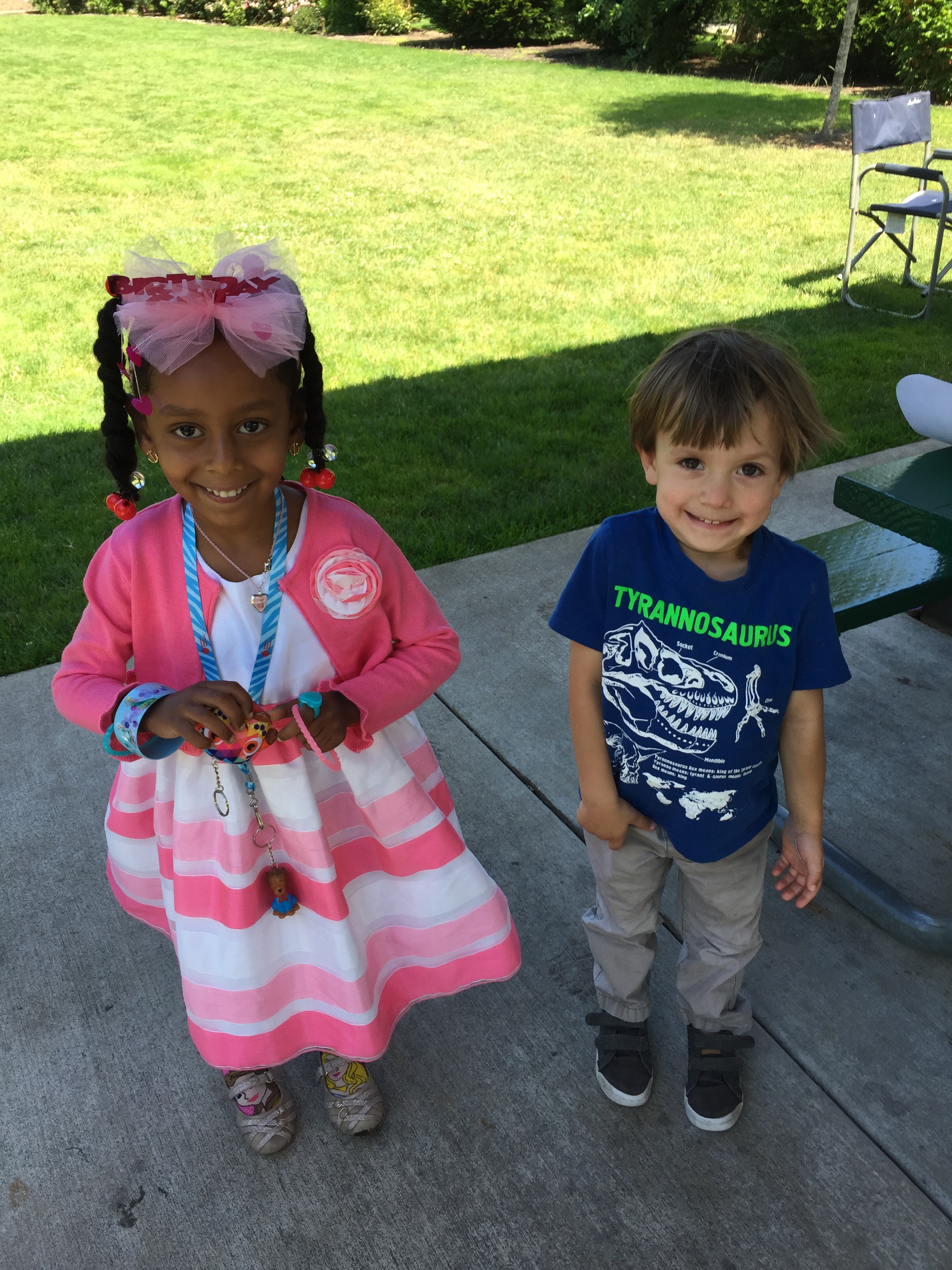 Danait’s birthday party went very well.  Harnet, her mother, had asked Rob to barbecue months ago, and so of course, he agreed.

We picked up Jake and Alissa, who agreed to help, bright and early this morning, and headed up to the park where a covered area had been reserved.  We set up while my sister Rosalie took Jake and went for balloons and the cake.  It was fun for Patsy and Alissa to be handed a bag full of “Frozen” themed decorations, and get to put them up any way they wanted.  A friend had made a poster of Danait since birth, which really added to the decorations. 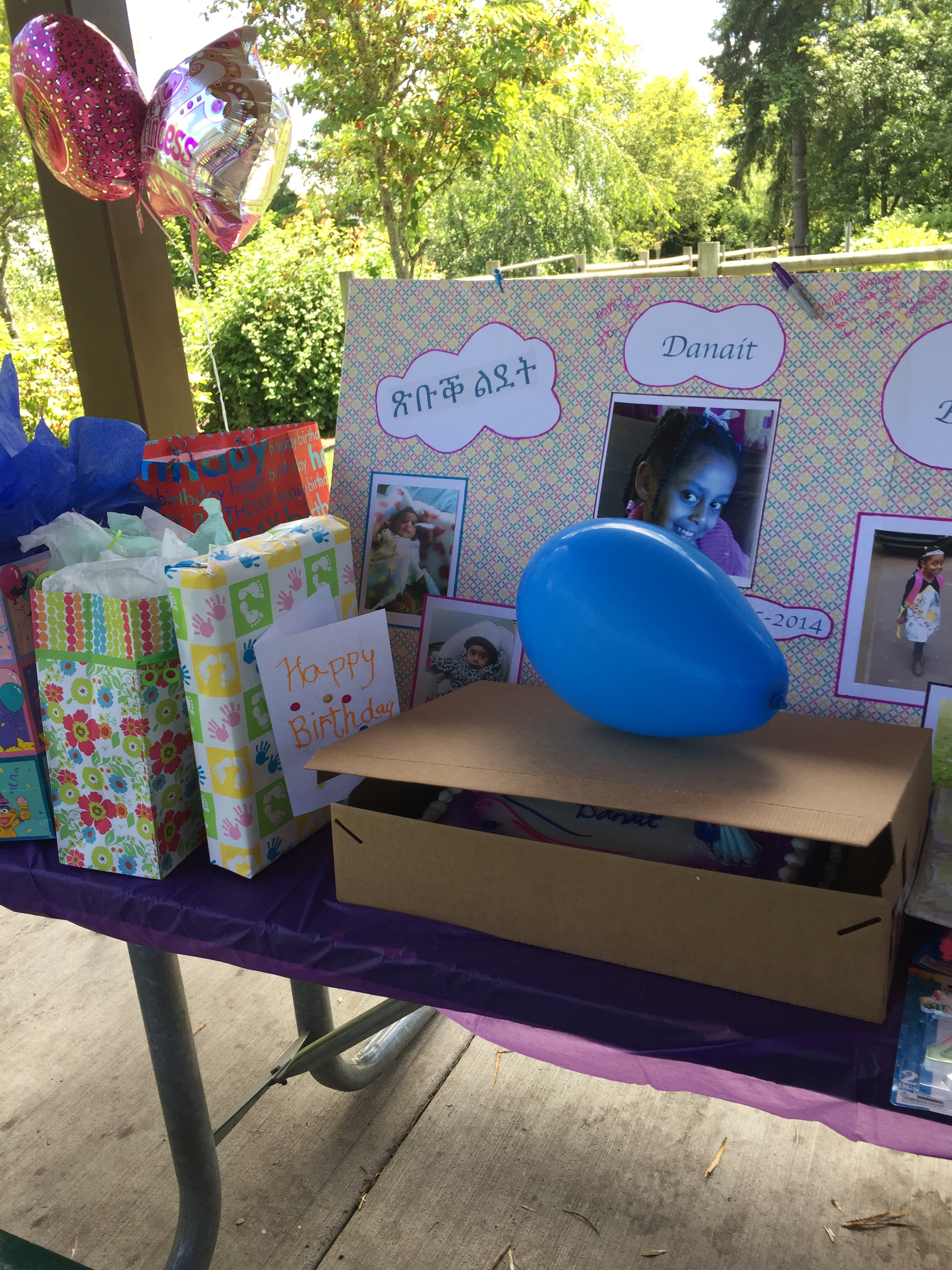 They did a great job, and there were decorations all over the place. 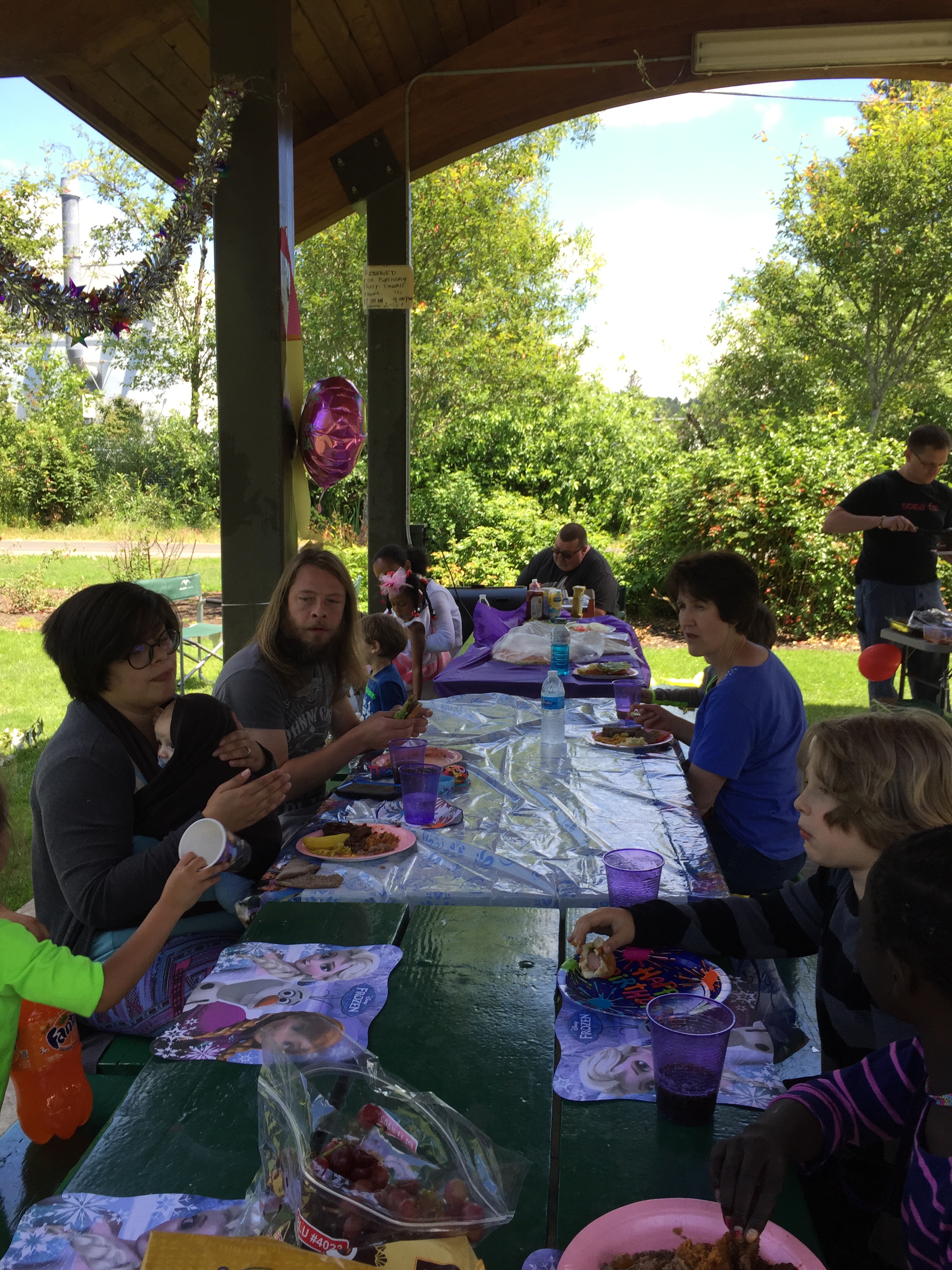 Several families arrived, and soon everyone was feasting on hamburgers, hot dogs, injera bread, lentils, Coalwa (beef), chicken in beriberi sauce, vegetables, potato salad, and fruit.  Harnet had been cooking up a storm.  The kids played and played on the equipment, and with bubbles Patsy patiently blew and blew and blew and blew.  Rob barbequed the meat.  I noticed that some of the parents could not get enough of the African food.  It was a new, very delicious treat for them.  Of course, the American food went down well, too, especially the hot dogs with this crew. 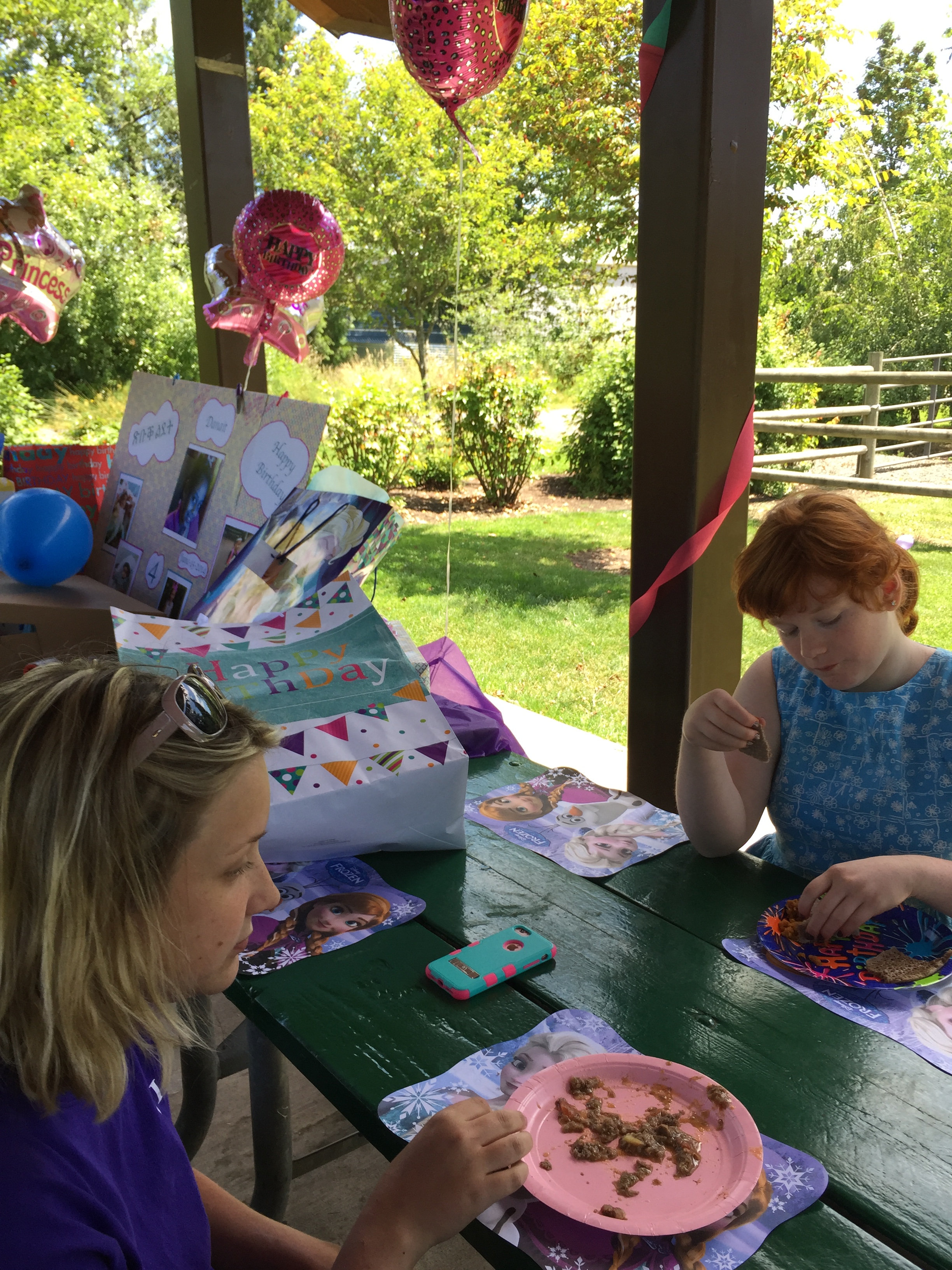 There was a really cool “Star Wars” themed party near us on the lawn.  It was so cool, that Jake joined it.  I went to fetch him back to the “Frozen” party, and he told me the people said he could stay.  They were very welcoming to him, and indeed had said he could stay, but I pulled him away after a few minutes, and we went back to our own party. 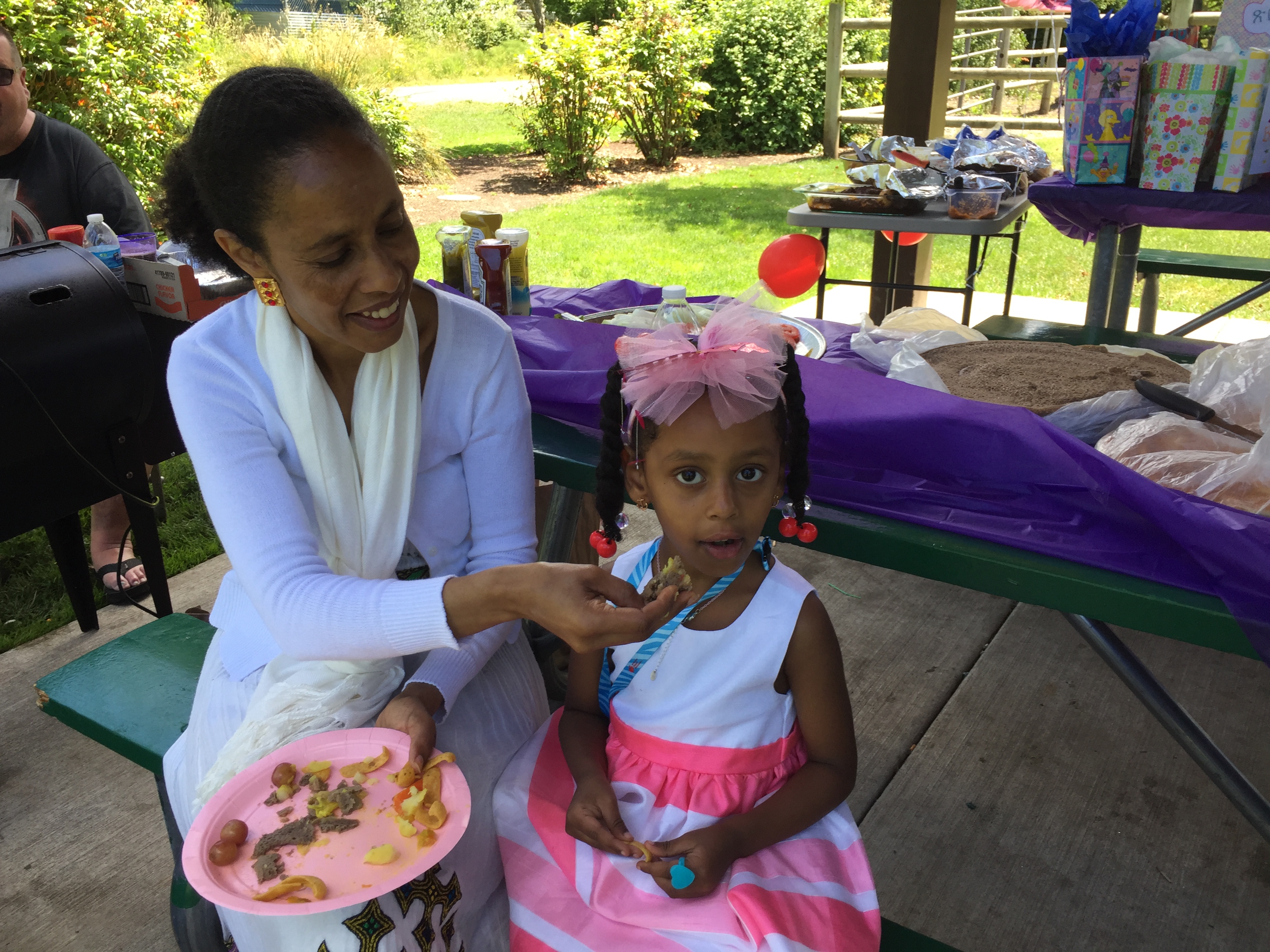 The kids weren’t too excited about eating.  Playing was more fun! Pretty soon, it was cake time. 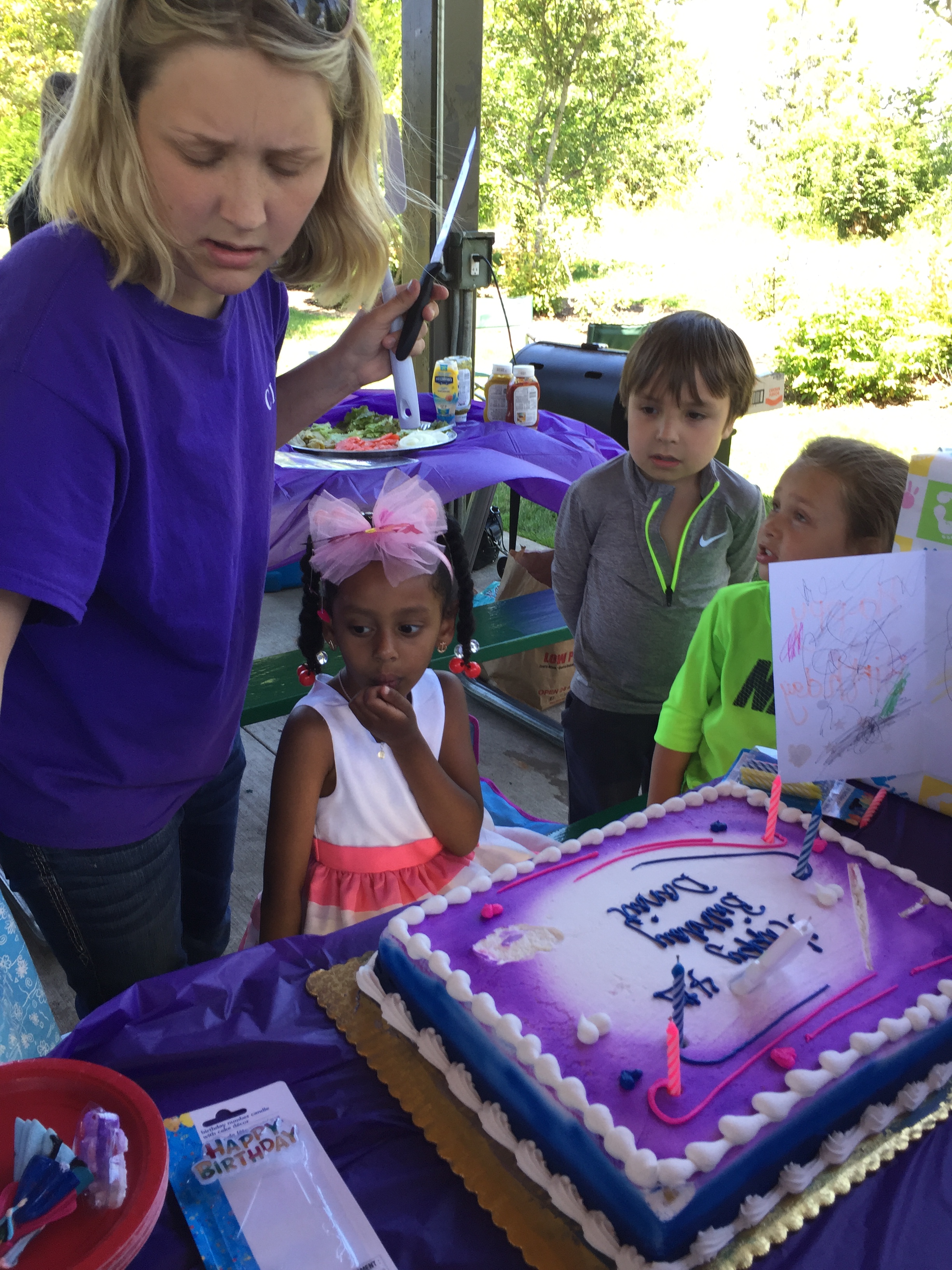 Alissa was such a big help with everything!

Jake and the other kids ate some cake, the presents were opened, and they went off to play again. Jake joined the Star Wars crew again.  I wouldn’t let him stay over there for very long during the time, since we didn’t even know the people AT ALL, but he came back pretty soon on his own to sadly tell me that Darth Vader floated away.  It was a balloon and we explained that all the kids hitting the balloons with the pool-noodle foam light sabers were supposed to get rid of Darth Vader!  It was a very clever idea where they had staked out many white (storm trooper) balloons, and 1 Darth Vader balloon, and let the kids hit the tar out of those “bad guys” until they were gone!

Families started leaving, and as I was cleaning up, Jake re-appeared wearing a mask, holding a foam light saber, and clutching a goodie bag from the Star Wars party.    I went and thanked them for their kindness, and they said, “Well, he’s a boy, and it was “Frozen” or “Star Wars” and we don’t blame him for choosing Star Wars!  They were so kind and gracious.  I’m grateful to them for that.  He had a great day, because he got to have some fun there, as well as the party cake, candy, and company at Danait’s party.  It is a big deal for him to get an invitation in the mail for any party.

Soon after transporting the remaining items back to Harnet’s house, we took our crew and headed back towards home. We stopped off at a double graduation party–2 sisters from church–one graduating from college and one from high school.  It was really a nice party and we ended up staying for and hour and a half.  Then, home to collapse.  Tomorrow, we will serve leftovers.

At last communication with my die-hard sister who was still there, more people had shown up at Harnet’s house and she was pulling out more food and the fun was continuing!  I’ll bet none of us are too full of pep tomorrow, but we had a good day, and it was worth it to see a little girl who was so happy.