We ate the leftovers from last weekend’s party.  For the beginning of the week, we feasted on deviled eggs, veggies, sweet and sour turkey meatballs, pickle rolls, chips, tortilla rolls, dipped strawberries, rice, and sandwiches.  There is still a little cheese left, but most of the rest has been devoured.

My oldest daughter had some baked potatoes left over from a party she had given.  She asked if I wanted them, and of course, I said I did.  I was surprised when she came in with a plastic grocery-store bag full of the largest potatoes imaginable!  They were all baked, and there were just too many for them to use up. It was quite a challenge for us, as well!!

I had baked potato bar one night with broccoli from the freezer, cheese sauce, and cottage cheese.  I tried the Tillamook cheese sauce mix in a package that I purchased last week.  It was $1.99 and I had a digital coupon for $1.50 off.  It was delicious.  There were 2-3 occasions when people ate a portion of a baked potato at a meal.  I fried one for breakfast one morning, and put in a few slices of kielbasa sausage.  With the last 2 potatoes, I made potato salad.  I included some hard-boiled eggs.  As you can see, it was almost devoured before I could even snap a picture! Michaela ate many, many peanut butter sandwiches with no jam, honey-nut Cheerios, and about 1/2 gallon of milk in 2 days, if not more.  She likes milk.  And, there’s a new rule that she cannot have soda until after she drinks a full bottle of water.  So, she drank water, and in fact, drink more than the forced amount a couple of times.  That’s great.  We are still on water restrictions, and so I bought a bunch of bottles of water. They say the water is safe for anyone my size, but I don’t want to take chances with my health, Rob’s health or the children’ health.  So, I don’t panic if I use some in cooking or drink a little, but try to use other water for the most part. 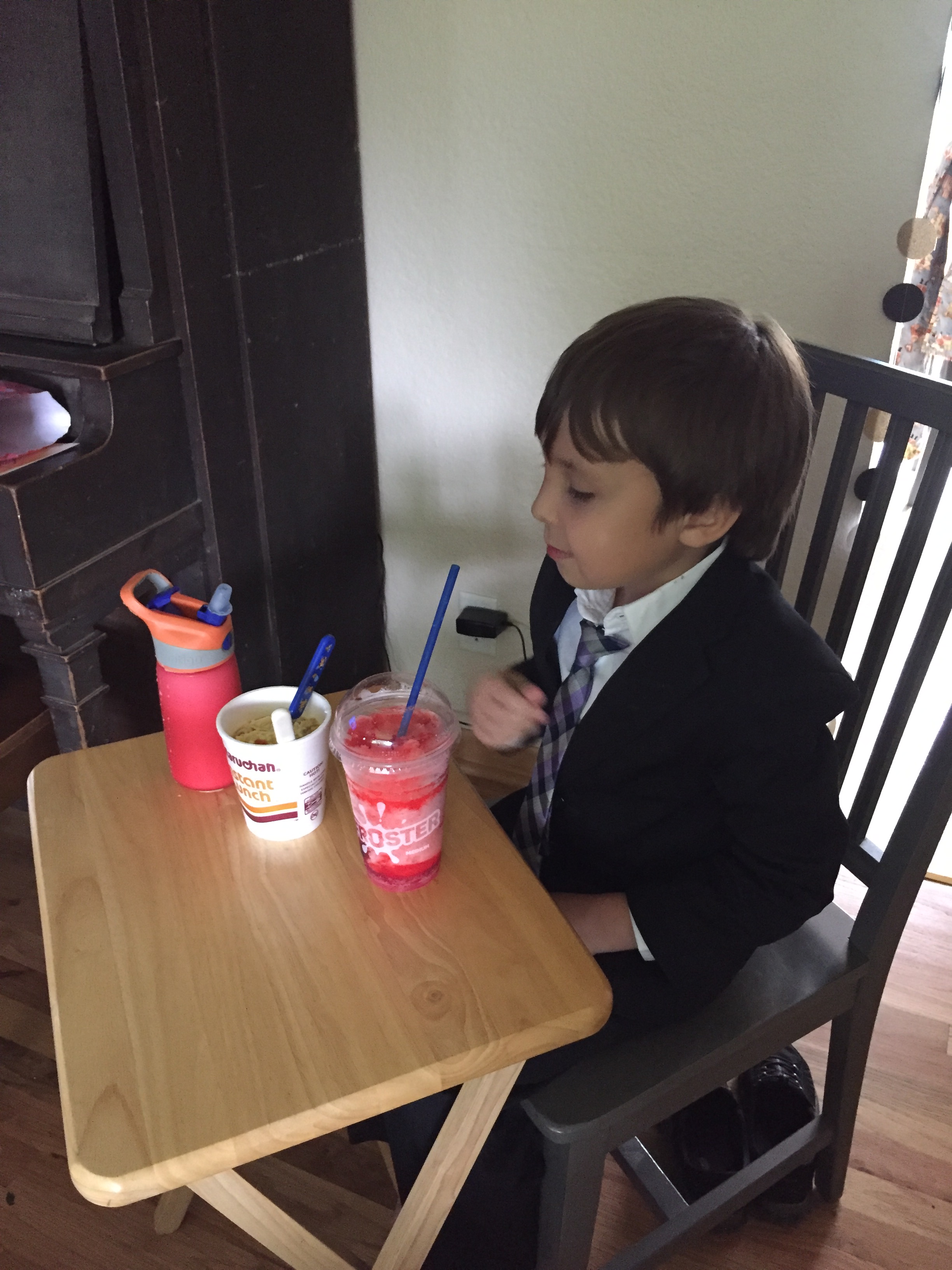 Jake ate Cup-o-noodles, chicken flavor, aka instant lunch.  In fact, I just bought a new case of it last night, because he used them all up from my pantry.  We don’t go through many of those, except when he is here.  Frankly, we don’t care for them as much as he does, but I’m happy to get them for him if he wants them.  He drank a lot of apple juice, and ate as many frozen Otter Pops as he could con out of me or anyone else.  He also drank some water–very rare for him–declaring that he was not under 6 years of age and didn’t have any health problems.  He was being a silly little stinker at the time, smacking his lips and declaring how good the water was because one of the other kids had just told him to not drink it:), but at least he got some water down for once!

Rob and I ate out one night, as we wanted to have a date night, and we got to talk in peace:). We packed picnics the rest of the times we were out and about with a bunch of children, or just had them wait until they got home to eat. (I wasn’t very popular a couple of times, but I’m trying to establish healthier habits at the beginning of the summer that will hopefully last the entire 3 months!)  I want French fries to go back to being a treat and not an expectation.   So, there went some of the cheese slices, lunchmeat, bread, peanut butter,  fruit, various snacks and bars, and drinks, all for a good cause–children’s stomachs:)

Birthday week continues–2 down, 2 to go!  Today Ja’Ana wants pizza for her birthday dinner, so Rob will grab an inexpensive wheat-crusted one somewhere, and I will eat one of the gluten-free ones I made and froze last week.  Tomorrow, Rob is barbecuing for our little friend, Danait’s party, and so I’m making a large potato salad again today.   I will put green onions in it, again.  Good thing they are growing so well in the garden right now!  I will also pick lettuce today for salads and to take for the hamburgers tomorrow. I grabbed a few grocery items last night, such as the Instant Lunches, and a bag of potatoes. All this potato salad means I’m really going through potatoes right now. It’s great that they are very reasonable! I only had to pay $1.99 for 10 lbs. That’s a lot of good food for the price. I will look through my fridge today, but don’t anticipate buying very many other groceries for a few days, at least. Having lettuce in the garden really helps, and I was able to get a bag of 7 small avocados for $2.49 last night.  We love them in salads and guacamole.  Patsy and I just ran into Grocery Outlet on our way home from her first high school youth group barbecue (yikes–she’s getting so old!), and I was pleased with what I found.  You just never know what they are going to have.

Today, I need to get hot dog and hamburger buns for the party tomorrow, and a few tomatoes to slice, but have the rest of what I’m bringing.  My sister has been up with Harnet, gathering supplies for this party at least twice, and we have it well organized between the 3 of us.  It’s going to be very fun.  There’s nothing like cute little kids enjoying themselves to brighten a day!