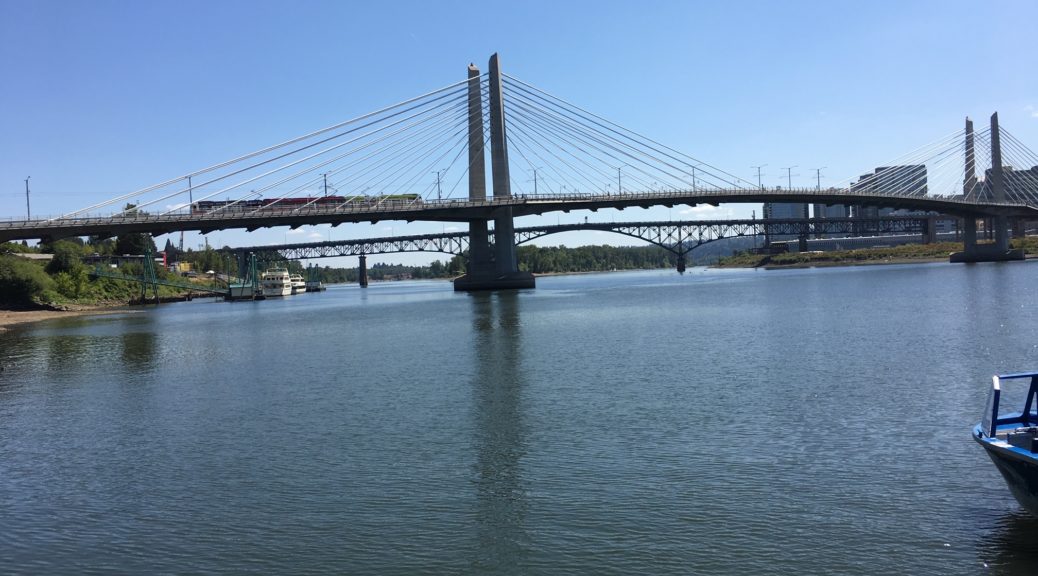 We spent a day enjoying OMSI (the Oregon Museum of Science and Industry). The submarine tour was especially interesting to our crew, as we had never been on that before. Between a friend who had a reciprocal pass and my sister’s membership, Patsy and I were able to tag along.

My sister bought us all tickets to see the Science of Pixar exhibit at OMSI. The kids loved it because it showed how so many of their favorite characters were engineered and had hands-on activities for them to do.

It was a beautiful day. I enjoyed the river and the bridges. I don’t go to Portland very often, and I am seldom in a place where I can just gaze at this sight.

I worked like crazy before and after OMSI, because the peaches were going, going…..and soon would be rotten…….I did get 17 jars of jam made, froze some, and Rob froze the rest while Patsy and I were gone. I was so glad that I got to them before they went bad. Peach jam is one of our absolute favorite kinds. I will use the frozen ones for smoothies. I will can another kind later in the summer.

During the summer, Michaela usually only hangs around with Rob for one day a week, Thursday. He takes her to Horses of Hope first, then to volunteer at 50 +, and then brings her here for a bit, then home. We have declared Thursday to be “wash the dog day” because she so longs to wash dogs:). So, once again, she and Patsy gave the dog a good bath, making Michaela happy, and saving us money at the same time.

We returned lots of bottles and cans, most of which were given to us, to put in our vacation fund. To make it stretch even further, we put the money on the Bottle Drop account, removed that amount of money from my grocery envelope and put the cash into the vacation fund, and then use the Bottle Drop 20% extra feature at the grocery store to get a few more groceries each time. If you don’t have Bottle Drop where you live, this may not make sense, but basically if you leave the money on your card and use it at a participating store, you get 20% extra store credit.

In the garden, things continue to ripen, and a few new seeds have sprouted. These are green onions. I hope to have a row next to the edge that will overwinter as they did a couple of years ago. These seeds were saved from those green onions, so I’m not out anything if it doesn’t work. I have baby lettuce, a few green beans, and a few more pickling cucumbers coming up for fall eating.

Patsy needed shorts. Rob found some jeans at a thrift store for $1 in her size. I took 2 pairs of them and cut them off. One I hemmed, and the other I just sewed around so she could fray them up to the sewed line.

It’s a busy time of year!