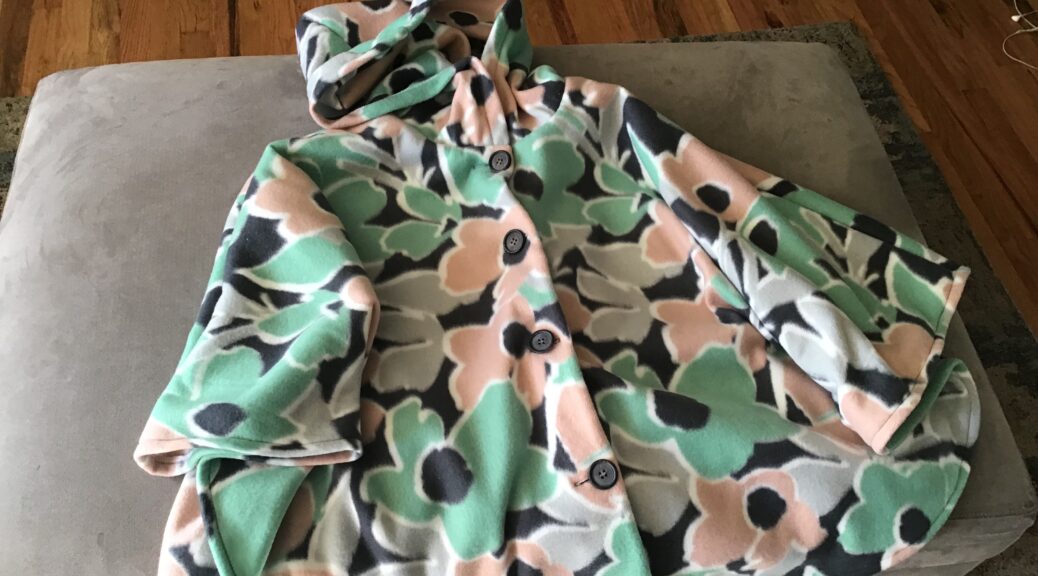 Patsy wanted a cape. She gets cold in the mornings, and thought it would be fun to snuggle in a “wearable blanket.” So, we finally braved JoAnn’s and she chose this fleece. They were having a sale for $2.99/yard, a wonderful price in my opinion. I got 3 yards, which was a little more than was actually needed. I used McCall’s 7202, view B.

McCall’s patterns were on sale for $1.99 and I got a handful. I have not been able to get any new patterns for a while, mostly because I have not been to the store during any sales, and, in truth, haven’t been going at all. Although I have quite a bit of fabric, and quite a few patterns, I have been frustrated with the fact that the patterns I have either aren’t in Patsy’s size, or don’t fit the size of the fabric pieces I have on hand. I’m hoping I now have some patterns that will work with some pieces I have on hand. I’m hoping to go get some Simplicity ones when they go on sale.

The pattern called for snaps to close the front of the cape. I bought a package of the large snaps called for, and they were $5. For snaps. So, I decided to experiment with some buttons I had on hand to see if they would work. I interfaced the front, and did not have trouble putting buttonholes into the fleece. I do find that these large buttonholes on the fleece are showing a tendency to stretch out already, and I didn’t even cut them as big as I would have on 100% cotton fabric. So we shall see how that works out.

The other change I made was omitting the line of sewing on the sides that would make sleeve-like openings in the cape. She wanted it to just flow.

For around $11 Patsy has a new cape. I told her to wear it and wear it and to not save it for “good.” I figure this one is an experiment, and the price was right! If it wears out quickly, or the buttonholes don’t hold up, I’ll make another one and use the snaps. It took a little longer than I thought it would, mostly because of the buttons and buttonholes and the fact I had not made this pattern before. It would be much quicker another time.

Now that the garden is finished except for the fall and winter veggies, I’m hoping to devote quite a bit of time to sewing. Patsy needs several new things. We went ahead and purchased a few items and I plan to sew a few, and her wardrobe should be back in great condition.