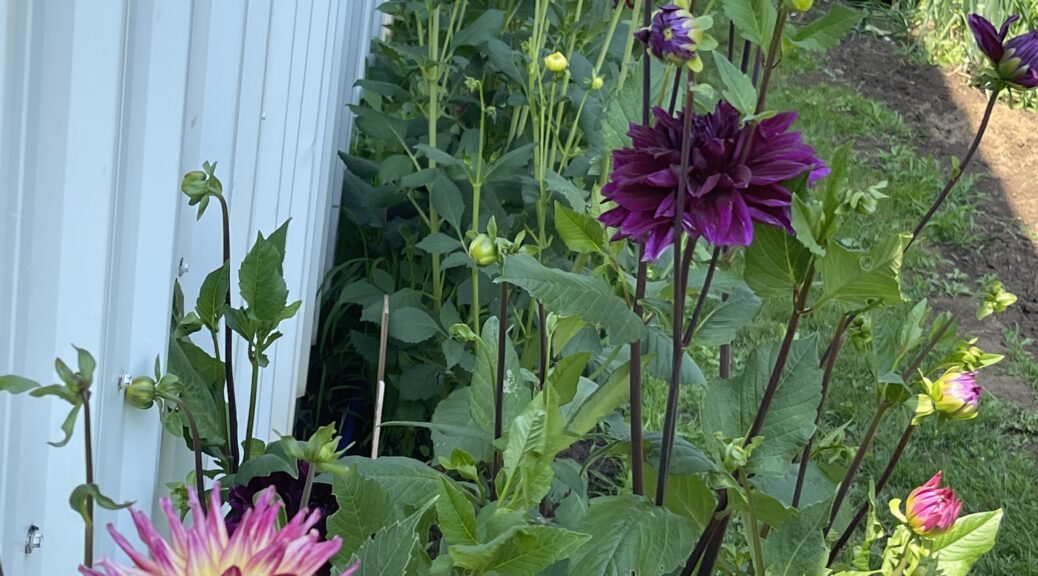 This has been 2 weeks of ups and downs! I guess that’s how life tends to be.

Rob went out with Malcolm to turn on the barbecue and shut the shop door. Instead of the relaxing evening we had planned, or the meat and grill basket of veggies we were going to eat, he accidentally tripped and got jabbed badly on his leg in 2 places by a stick of wood, and we ended up at the urgent care. The huge blessing, especially since we were towing both Jake and Malcolm at the time, is that the second place we drove to was willing and able to see him right away. Within an hour, we were picking up his antibiotics. Amazing! He is healing now, thank goodness, but has a ways to go. Poor Rob!

A real highlight of the week was an event at the church called Family Fun Night. We took Malcolm and there were all kinds of water activities set up. It was blazing hot and all the kids enjoyed themselves so much.

This past week, we have had to contend with temperatures near or above 100 degrees F. every day. It has been a challenge to keep the garden from dying. I’ve been watering almost every day and running an extra setting on the garden during the hottest part of the day, most days. The beans are blooming and will drop their blossoms and not set fruit if they get too hot, so I try to cool them down a bit. I was able to can 7 quarts and 10 pints on the hottest day of all. I have a knack for growing things that ripen during the hottest days of the year, I’ve been told:).

Despite the heat, my latest crop of lettuce is not bitter yet, so I have been picking lots of it early in the mornings. I’ve been sharing it with anyone who wants any because it will bolt and become bitter quickly in this weather. I was able to weed a few times early in the morning and my newly planted lettuce, snow peas, cucumbers, cilantro, spinach, summer squash and cabbage and broccoli transplants are growing well. Zucchini is ripening daily and I’ve grated some for winter, stir-fried it, and given it away. The current batch of snow peas was finished up and there will be a gap until the next planting gets ready. I pulled some exceedingly large and ugly carrots, which I will can when the weather cools a bit. I’m getting just a very few tomatoes, both cherry and large, but there are many green ones coming on. I even got a few small cucumbers.

The heat caused the blueberries to ripen quickly. I used some left over from last year to make a few pints of blueberry pie filling. I picked several times and froze fresh ones for the upcoming year. We’ve eaten a few strawberries, blueberries, a few remaining raspberries and some Marion (black) berries.

The dahlias are in full bloom now. There are so many kinds and colors. Behind the beans, where you can’t see them, are about 30-50 plants of the kind with small blooms. There are more plants with large blooms out in front of our house, including a pale yellow one with a bloom the size of a dinner plate! I have picked bouquet after bouquet already!

Yesterday, we had both babies for 10 hours.

We’ve been keeping busy around here. Through it all, we’ve been able to stay quite frugal, although the heat kills my joy for cooking and I didn’t alway feel like doing that job!

I cooked several times exceedingly early in the morning. One day, at about 4 am, I made gf bread from a mix I had been given and also some flatbread. I made 2 different noodle casseroles to microwave in the evenings. Rob picked up some lunchmeat and we’ve had sandwiches and salads several times. He asked that I NOT make soup this week:).

A very good friend’s family has contacted Covid. Rob left food for them. I sent noodle casserole, scones and cornbread from mixes, and salad. Rob stopped at Costco and got us and them each a cooked chicken. $5 can’t be beat! I made the food I cooked early in the morning. This was an excellent way to use a cornbread mix I had been given, but could not eat, as it contained wheat flour. The ones who can eat wheat around here had some and we shared the rest.

Our heat pump, which runs the air conditioner, broke yesterday (Saturday). (Did I mention we had both babies for 10 hours?). What a day for it to break! Rob called a friend who is in that business, but lives over an hour away from us, to ask if he knew of anyone reputable in our area, and he came and fixed it! He “happened” to have another call in our area. That, my friends, was God looking out for us, for sure. We had feared we would have to just live with it until Monday. We might have had to move into church all day Sunday:). But our house is cool and comfortable today. What a blessing!

I have been stacking wood. We have been given many loads of wood and it is so nice to see our woodshed and wood stack slowly grow week by week.

The schools near us are handing out free lunches for children again. We were able to find time to get them 3 times, and they contained apples. Jake has been in an apple-eating mood and has been enjoying them very much. I don’t have an apple left in the house, including the ones we bought. He has cleaned me out! I’m going to send Rob over there to get them those lunches again tomorrow if he has time. Let’s hope for more apples! I just didn’t have time or energy in the heat to shop this past Friday and we are happily making out with what we have on hand and garden produce. Except Jake, who wants more apples:). I will just make a list of what I run out of and buy extra next week, if needed.