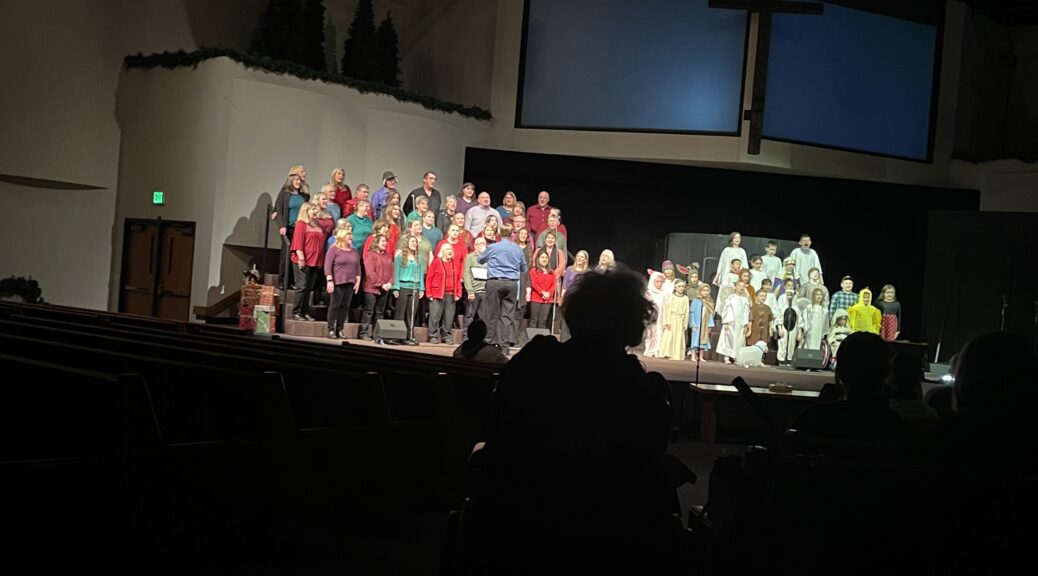 This week, I was in a large Christmas play at our church. I sang in the choir. This is the adult choir and the children’s choir. There was also a drama team, an orchestra, set people, people who took care of the children, an ensemble, and so many more who participated. Although everyone has been practicing for weeks, separately, this week we all came together. We practiced several hours every night, except one, all week long. Then, we did a final dress rehearsal on Friday night, with about 20-30 in the audience, and then 3 performances over the rest of the weekend. The play was almost 2 hours long, and came out great every time, despite the fact that several succumbed to sickness over the week. By the last evening, the 3 shepherds abiding in the fields had shrunk to 2, and at one point 1, ….the 50 member choir was down to a little over 40….and the littlest wise man almost didn’t make it….but those kids were so cute, no one noticed!

The Christmas story was told in many different ways, along with the drama story line. It is the first time I have ever been in something with that many other people, and the first Christmas play I have personally participated in since I was a child. Over the years, I’ve directed, transported kids, sewed costumes, and more for children, but never sang or had a part myself.

This is something I’ve wanted to be in for several years, and I’m so excited I got my chance. I learned so much through the experience, and am in total awe of the 2 directors who oversaw it all.

The play was free for all to attend, and we had many, many people who took advantage of that offer.

I’m very tired today. Looking back, I really didn’t do much else than that last week, except prepare for my Sunday school class, cook meals ahead so they could be warmed up in the evenings, and work part of the week. My household has been fighting sickness this past week, but I’m so happy to say I made it through without getting super sick like some:)

We were able to make it through with frozen and canned foods and pantry staples and didn’t go shopping for much. There was no time, and we have plenty of food. I made a soup, white rice and brown rice, used some of the tater tots I made a couple of weeks ago. We used peaches, fruit cocktail, pears, home-canned soup, and Rob made a cherry crisp from our canned pie filling. I made pork verde for the college group and us, made into enchiladas. Rob cooked hamburger, and we finished up a Costco chicken he quickly stopped in for on Monday while picking up some things for our very sick neighbors. Covid is still a thing, in our neighborhood, at least:( Now that Costco has moved very close to my house, it’s easier to just grab a couple of things.

Malcolm spent some time outside, although the weather turned nasty for the latter part of the week. I only found time to take him on one walk, and we didn’t make it to the YMCA this week.

I did get a few Christmas decorations up around the house, and took down the Thanksgiving ones. Rob put up some yard lights and a blow-up snowman. I had to chuckle–it’s all facing our house. That way, Malcolm can see it all from the big picture window:). People on the street….not so much!

We are keeping Christmas quite simple this year, and we have a plan for the gifts we want to get, which we are now have time to follow. That, and some desperately needed cleaning, is high on my list for this next week!