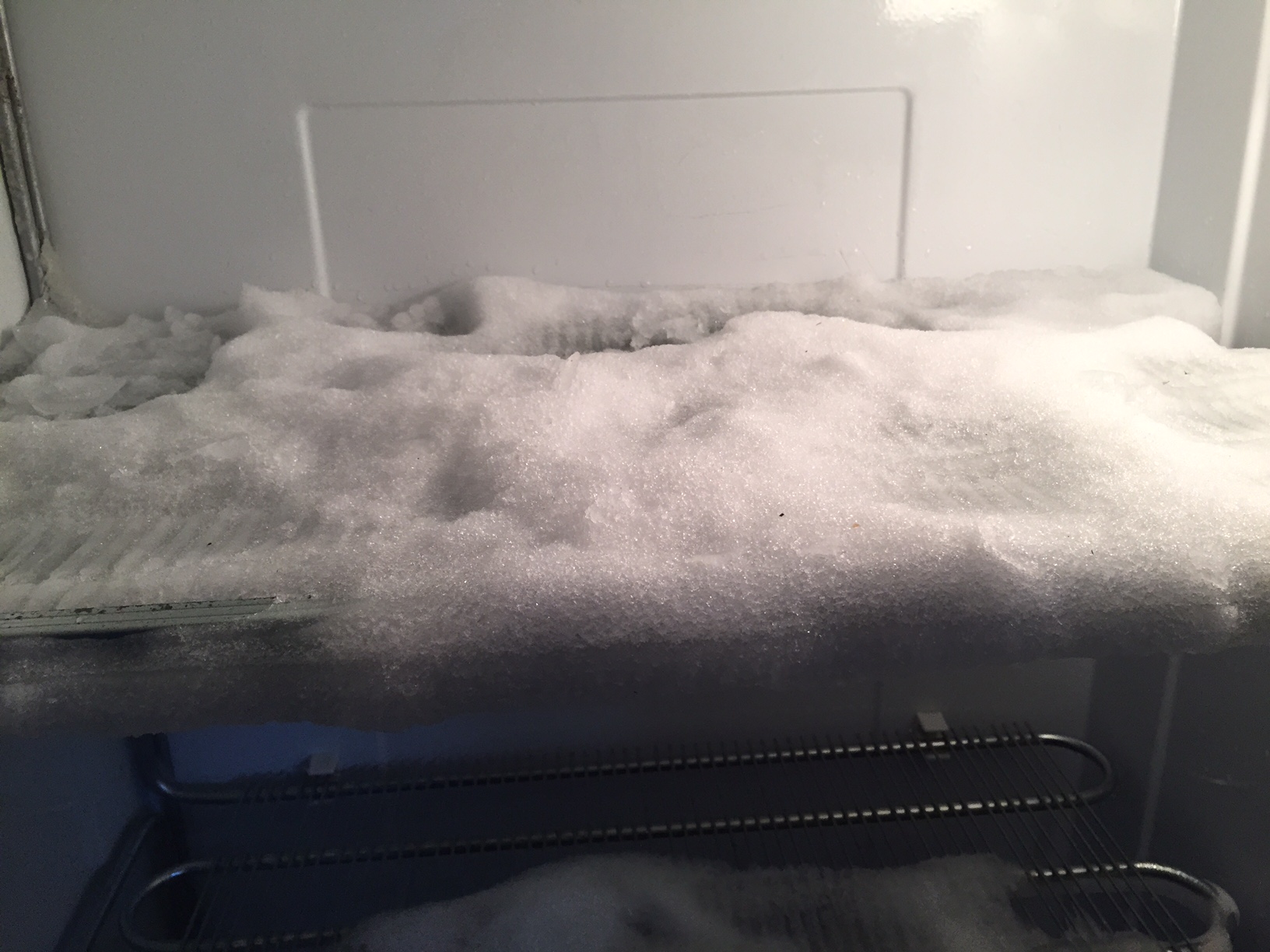 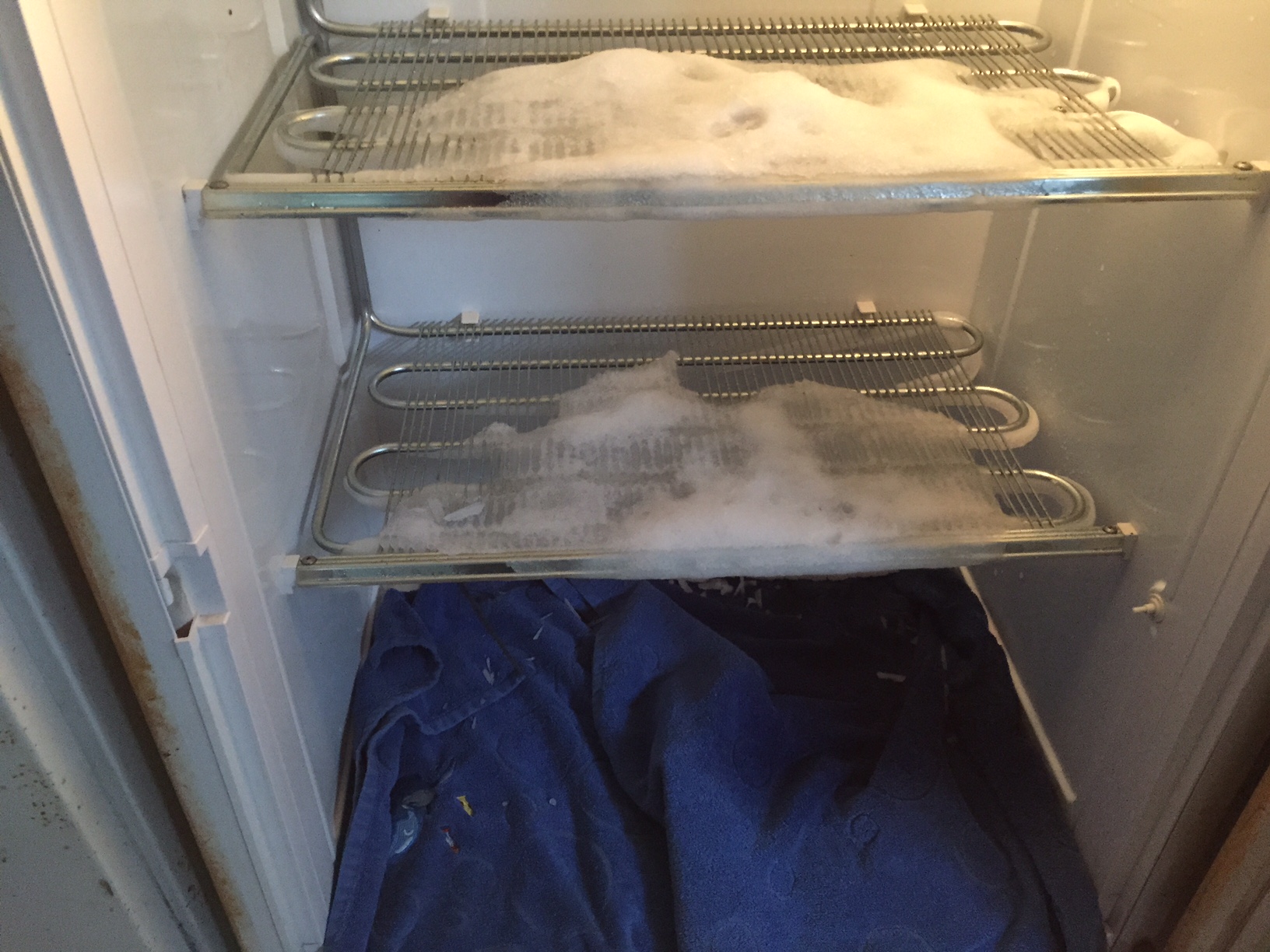 As you can see, someone had left this freezer cracked open one day after removing some coveted corn dogs.  When I found that it was actually cracked open, and starting to thaw out, I was able to save almost all of the food because I caught the problem in time.  However, it iced up badly when it was re-freezing.

A main goal of my use-it-up project is to empty out one of my many freezers.   Clearly, this one was the one that got targeted first.  This past week, I was finally able to empty the rest of the items.  We have eaten food from all of the freezers, so I simply took the remaining items out of this one and put them into the spaces in the other freezers.  For the first time I can remember, I was able to simply open the door, turn off the freezer, put towels in the bottom to catch the water from the melting ice, and leave it overnight.  I did make a pot of broth and put it in there while hot to both cool the broth and melt more ice, but otherwise let nature take its course.   Easiest freezer cleaning EVER!  The next morning, I just wiped it out and started to transfer items over from other freezers to re-fill it.  I will work on emptying another one, cleaning it, sorting and organizing every item inside, and so on until they are all done. 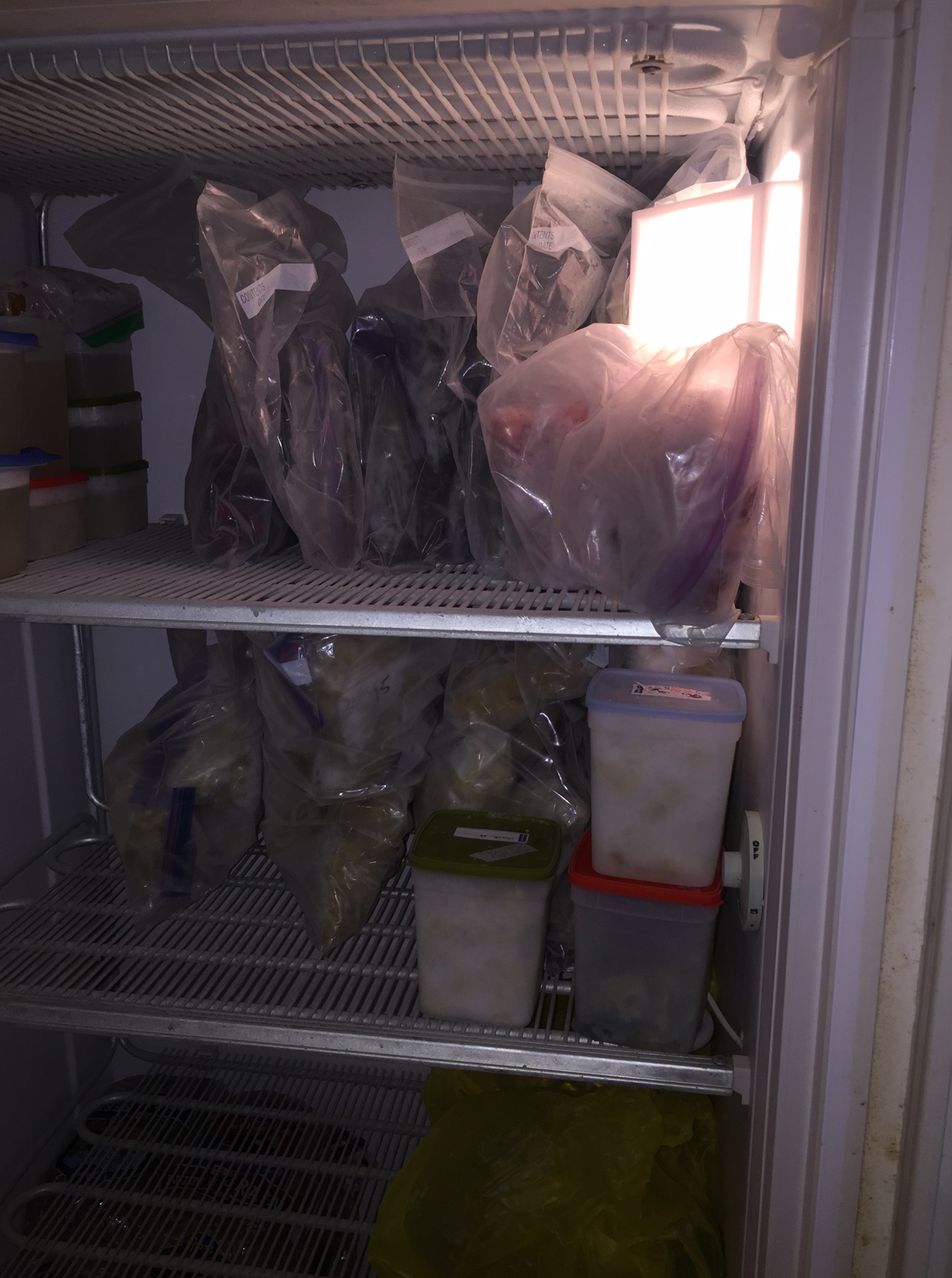 Items I used this past week:

Several loaves of frozen bread and buns that were given to us a while back, and I froze them.  I am only accepting 1-2 loaves at a time from now on until after we move so I can keep the freezers down.  There are at least 8 loaves still in there and they need to be used.

One huge-2 gallon bag of turkey bones from when we butchered last.  I made into broth.  I actually froze several containers of broth, but also used quite a bit, so space was gained.

A 10 pound bag of chicken thighs and drumsticks I got on $5 Friday a while back.  We ate chicken at least 3 times this past week.

Frozen blueberries, blackberries, strawberries, some shrimp that was starting to look freezer-burned but turned out great, a piece of fish (also suspect but turned out fine), frozen white beans, frozen turkey bits (I REALLY wasn’t sure about some of that–looked pretty bad, but the girls have been chowing it down in quesadillas daily-whew–and Lovana also made white bean chili from it and the frozen beans and some broth)

Many, many pantry and food items were used for 4H club last Friday.  I purposely chose recipes that would use my stockpile items.  Those included several cans of beans, broth, lentils, a whole chicken (I gave them a lesson on how to cut it up in that class, then they cooked it),  and many more.  I had to buy potatoes and a few other things. I had 9 recipes going in the 3 hours (Rob did 2 outside at one point)–it’s a bit chaotic, but super fun and a great learning experience.  We did use an entire 2-lb loaf of Tillamook cheese that day-haven’t done that for a while:)

I had to throw away a little package of sausage.  It was awful.  You could smell the freezer burn from across the room.  I’m glad it’s gone.  Overall, I’m delighted with this week’s progress.