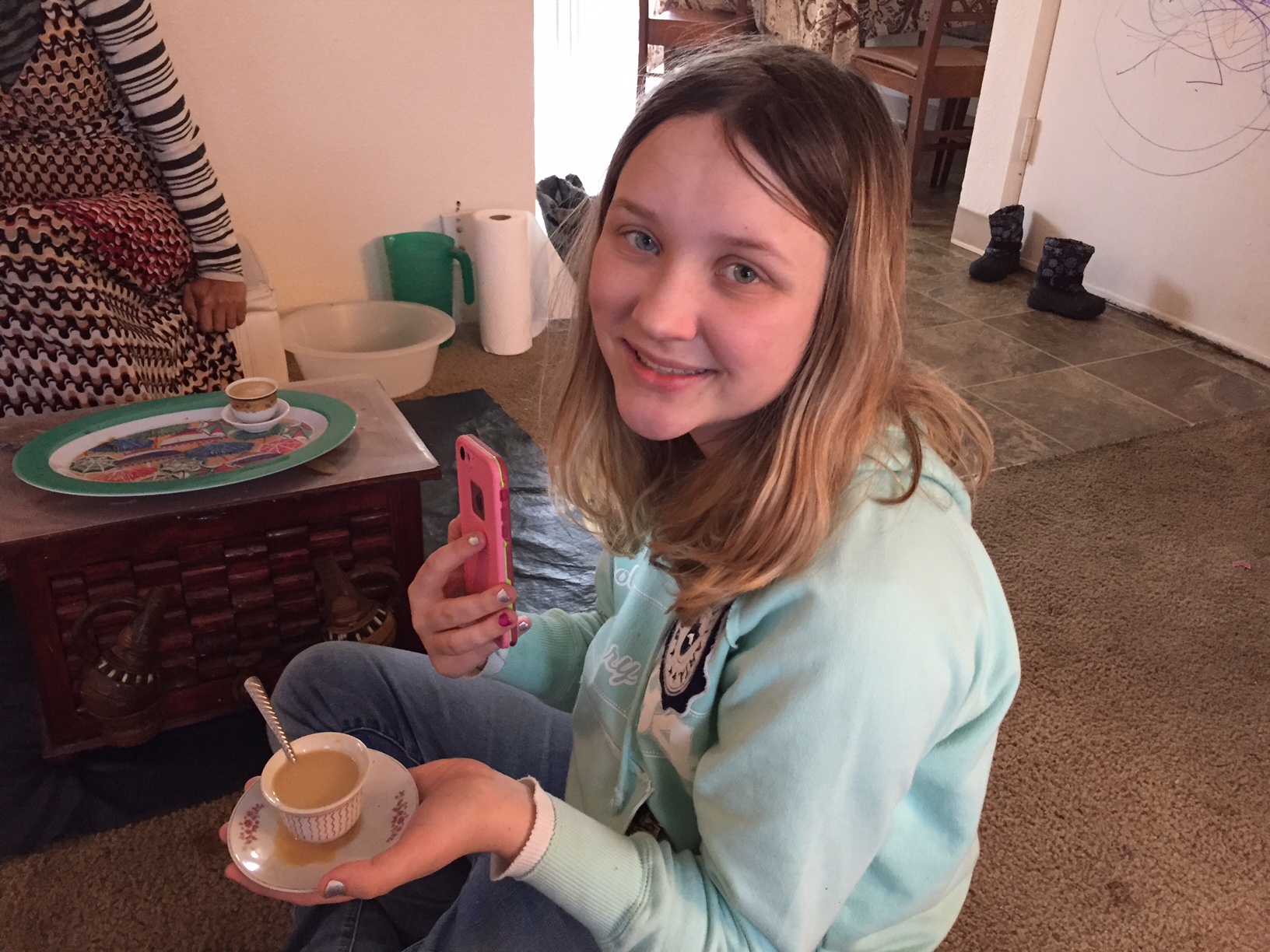 Today, my sister Rosalie, and I took the girls to see Rosalie’s friend Harnet and her 2 year-old daughter.  You may remember that we have gone to see her before and I wrote about it in this post.  We also went for a day out around Christmas time.

Today, Danait remembered the girls fondly, looked forward to them and myself coming over, and played really well and interacted with all of us.  It was quite a change from first time when we went over there and she was very shy because she did not know us.  Rosalie always brings a balloon from the Dollar Store, and today was no exception.  We also took a bag of assorted coloring books and activities, such as stickers, that were sorted out from Alissa’s house. 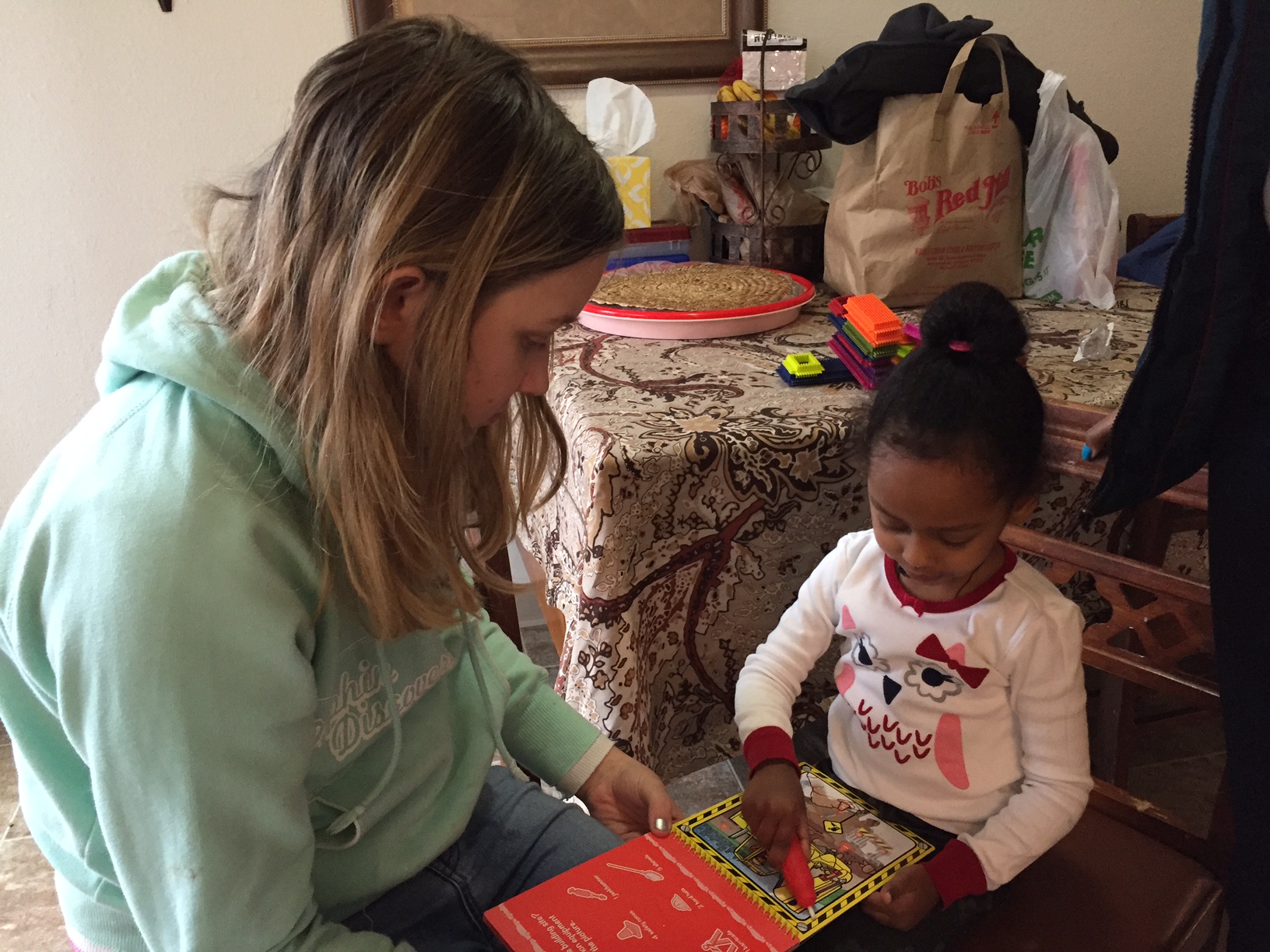 She loved them.  (The reason you will see lots of Alissa and no Ja’Ana is because she is catching that awful cold that we are passing around  and didn’t want her picture taken today–mostly she was very quiet and sat down a lot–poor girl!) 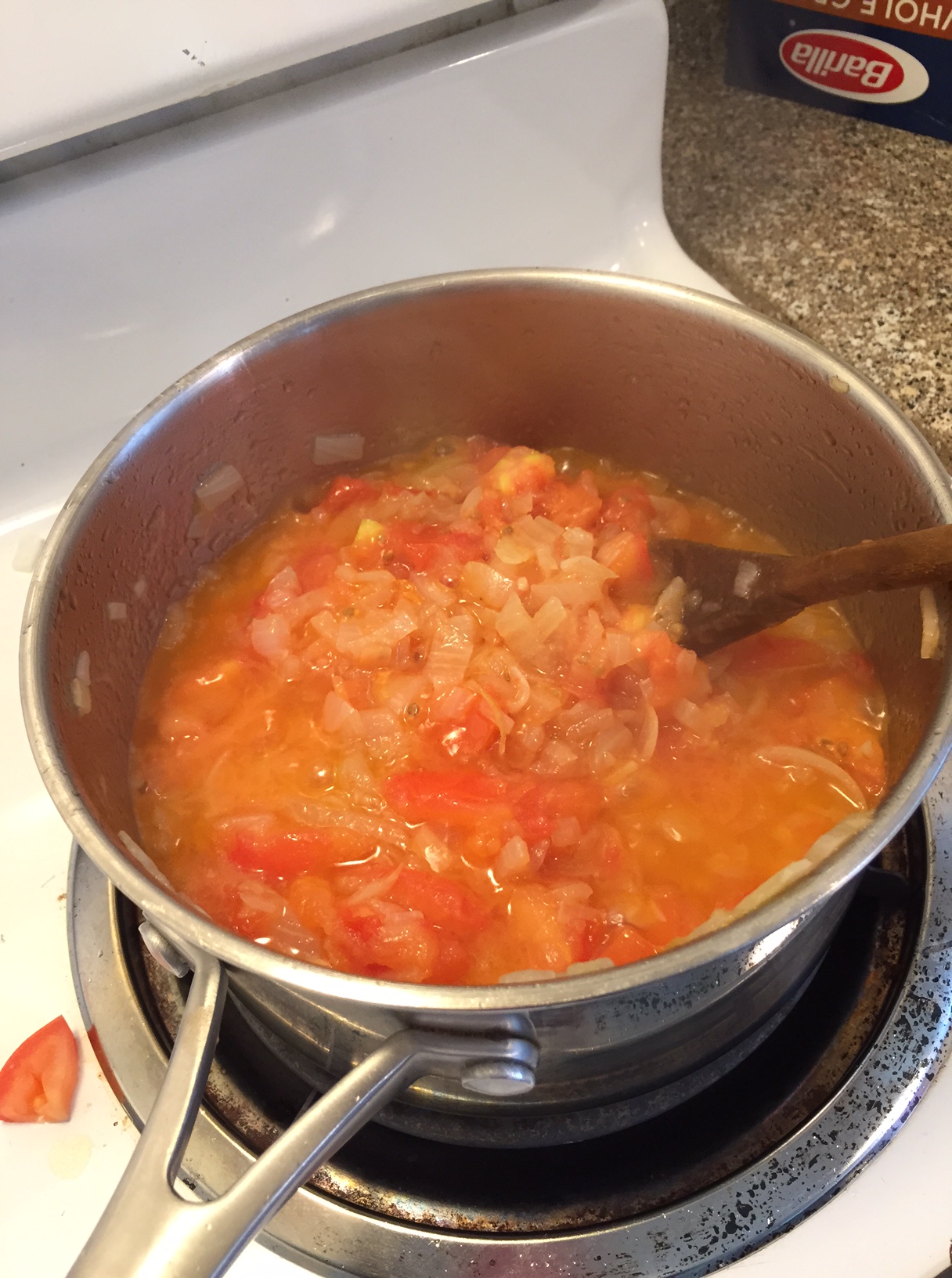 Harnet made us a bunch of food.  Yum!  She carefully taught us how to make this red lentil dish.  Here’s how you do it:

Saute a lot of onions in oil.  (I didn’t see exactly how many, but it was between 2 and 3 cups)

Chop up 4-5 tomatoes and throw them in. (She said a can would work)

Cook all of this for a while until tender, stirring occasionally–about 1/2 hour or more.

Chop 8-10 garlic cloves and put them in.

1 jalepeno pepper, sliced into sticks.  (She said this can go in any time.  She did it toward the end)

Salt and pepper to taste.

She then added some water until there was about 1 inch of liquid above the solids.  She stirred ever so often and let it cook until soft–about another hour.  It may have been done sooner, but that’s when we wanted to eat.  We had it over rice and some of them ate it with injeera bread.

She also made some chicken and some beef, which were also delicious.  It was important to her to cook for us, and for us to eat a LOT!  She is so hospitable.  We did our best, which was easy, because it is delicious food, although very different than what we are used to.  It’s a little bit spicy, so sour cream or yogurt is offered  to cool it down.  I like it the way it is, but the girls take the sour cream. Rosalie and the big girls took Danuit for a walk and then played with her while Harnet and I worked on her homework for her classes in college.  We worked on English.  It was hard, and English is my first (and only) language.  We worked for about an hour and did not even get done.  After we left, Rosalie helped her finish.  She was so grateful because it is hard to get it done with Danuit “helping” and also she said it is just nice to be able to KNOW that she has the right answers instead of HOPING she is right.  She was telling us that she is studying for citizenship now, and hopes to take that test before too much longer.  I already respected her for her bravery and courage in coming to a new land.  I respect her even more as I get to know her and see how hard she is working to succeed here.

Then Harnet made us coffee.  She roasted the beans, ground them, heated milk, added tons of sugar, and served it to us.  I’m not a coffee drinker, but just can’t say no to that.  It has enough sugar in it that I can drink it and enjoy it.  There is a flavor to it that I can’t describe, but it’s a good flavor–very strong and sweet.

I brought embroidery supplies and started teaching her how to embroider a towel, because she wanted to learn.  We simply ran out of time before I had to head back home (over an hour away) to get to work.  So, Ja’Ana showed her how to find the DMC website with stitch instructions and pictures, and hopefully she will be able to get guidance from there. 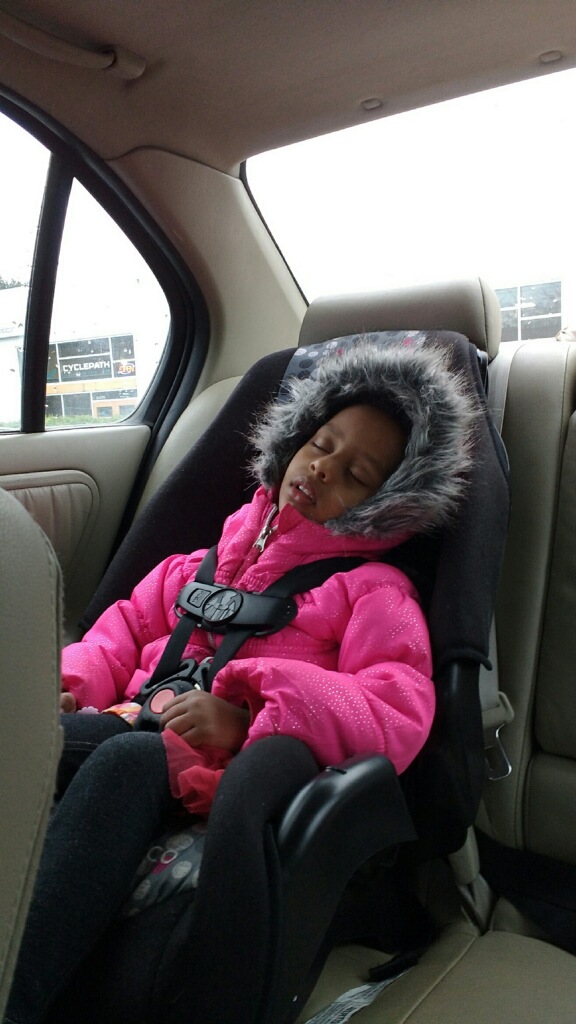 After we left, Rosalie took them shopping to an Ethiopian grocery store.  On the way home, Danuit fell asleep and stayed asleep on the couch while they finished the homework.  Yea!  The girls were awesome!  They wore her out!  They had so much fun, despite J’s cold.

I am so happy with how this whole experience is unfolding for the girls and myself.  When we go, we do not do any conventional schoolwork that day, but I feel they are learning so much.  They are making a connection with someone they would not normally cross paths with.  They are learning that they can make a difference in someone’s world, by the simple act of playing with a small child and some simple toys.  They are learning to respect someone with different ways of doing things, a different language, and a different culture. They are seeing that the world is so much bigger than their small arena.  I like to think they are very accepting of others, and I want that to grow in them.  I’m happy they are generous and take small presents, and can also see, and be grateful,  that Harnet and Danuit have much to offer them as well–things like a welcoming spirit, hospitality, kindness, and more–and that they have something to offer, too.   I love it that they are surrounded by strong women, such as their aunties, and I think they will probably not understand how much courage it took for Harnet to leave her homeland and come to America for a better life until they are much older, but I love that they will have that information to process when they are ready.  They are going to need courage and compassion and many other traits to be good women.  Today is one of the days that I love about homeschool because we have time for these kinds of lessons along with the more traditional ones we do most of the time.

6 thoughts on “Another International Homeschool Day”