Today was the first birthday party we are hosting this week.  Here’s how we made it simple, affordable, yet very nice. 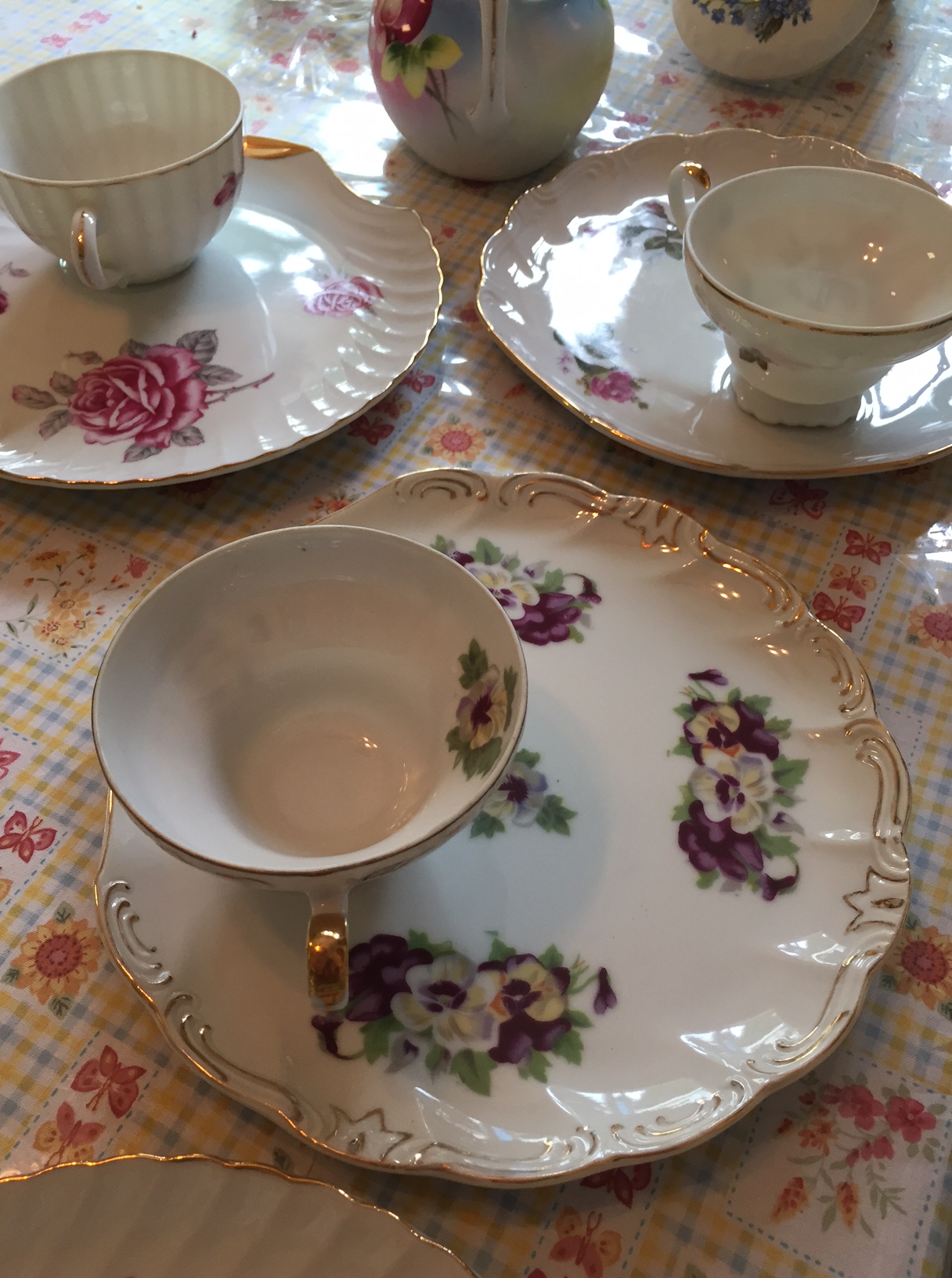 I started by giving Patsy a handful of invitations I had saved when we moved.  She wanted a small, special party so I have plenty from another occasion in my card bin.   We chose a day after school when I knew I would have plenty of time to get ready during that day.  She handed them out about a week and a half ago.  Although we asked for RSVP’s, we only got one firm one, and a couple of “iffy” ones.  So, we were not quite sure how many to expect.  Then, I dug around in the cupboards and pulled out fancy dishes.  These little luncheon tea plates are from garage sales and a junk store and I have had them for about 20-30 years.  There are a couple that match, but mostly they are different floral patterns.  I have 8 or 9, and got 4 chosen and washed and the others set aside in case we had any surprise guests that forgot to tell Patsy they were coming.

We are still quite new here, and had to also face the possibility that we would have only 1 girl, or even none if something prevented her from coming.  There was a lot of anxiety going around here this morning.  I was very proud of Patsy.  It’s hard to keep trying and trying in life when there are lots of changes, and so much history of disappointment in the past.  But, she was brave, and my prayers were answered.  In the end, 3 girls ended up being able to come.  They were delightful young ladies, and I enjoyed them very much.  Patsy was so happy. 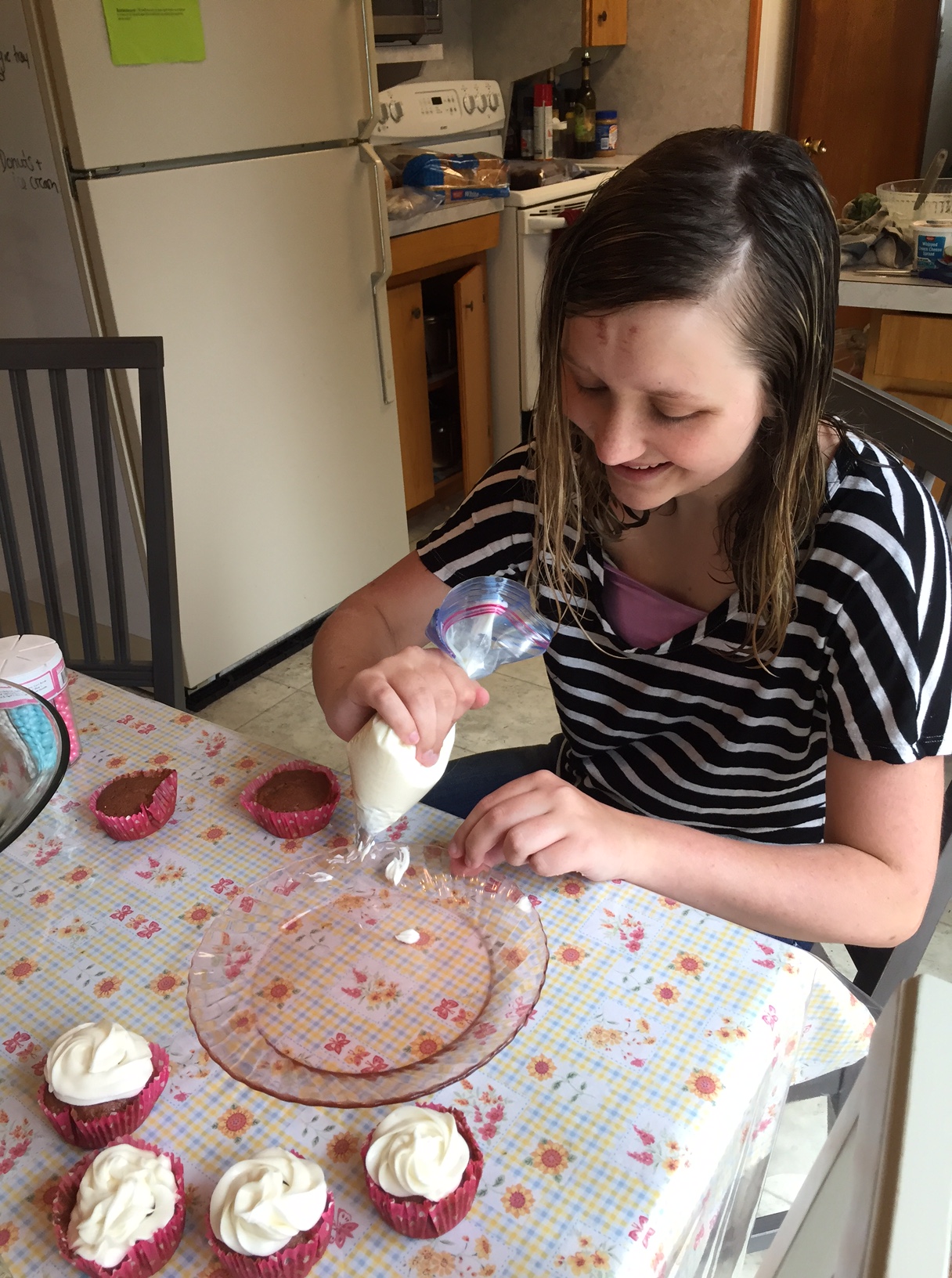 Alissa and Ja’Ana helped get ready this morning.  They also worked a bit on school.  They are almost done, and have very little to complete.  Alissa brought decorating supplies and worked on the cupcakes. 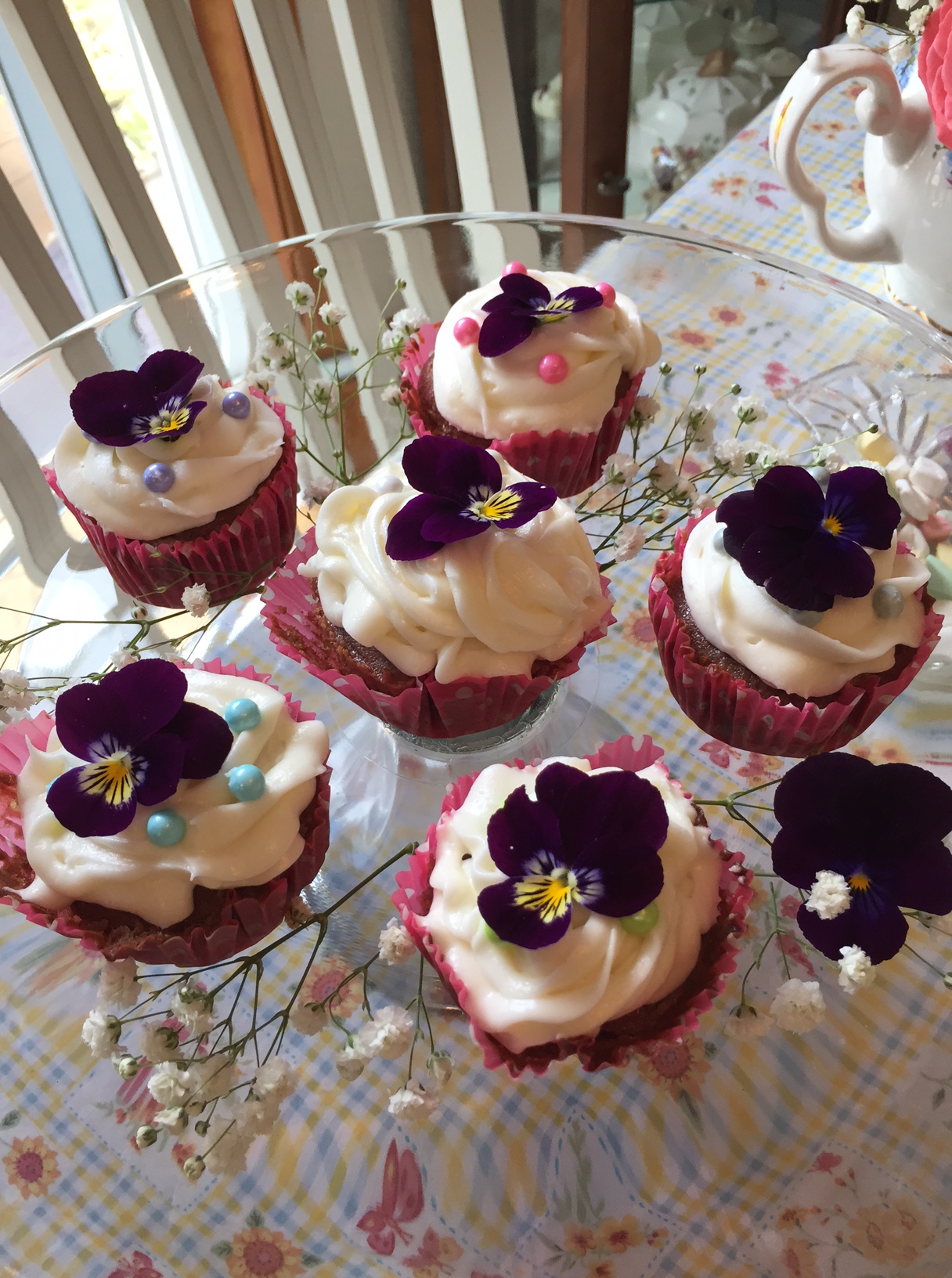 She had frosted cupcakes I had baked and frozen last week.  She added the candies on top, and we picked and added violas to make it special.  We put Baby’s Breath on the fancy dish and…..gorgeous and special for pennies. 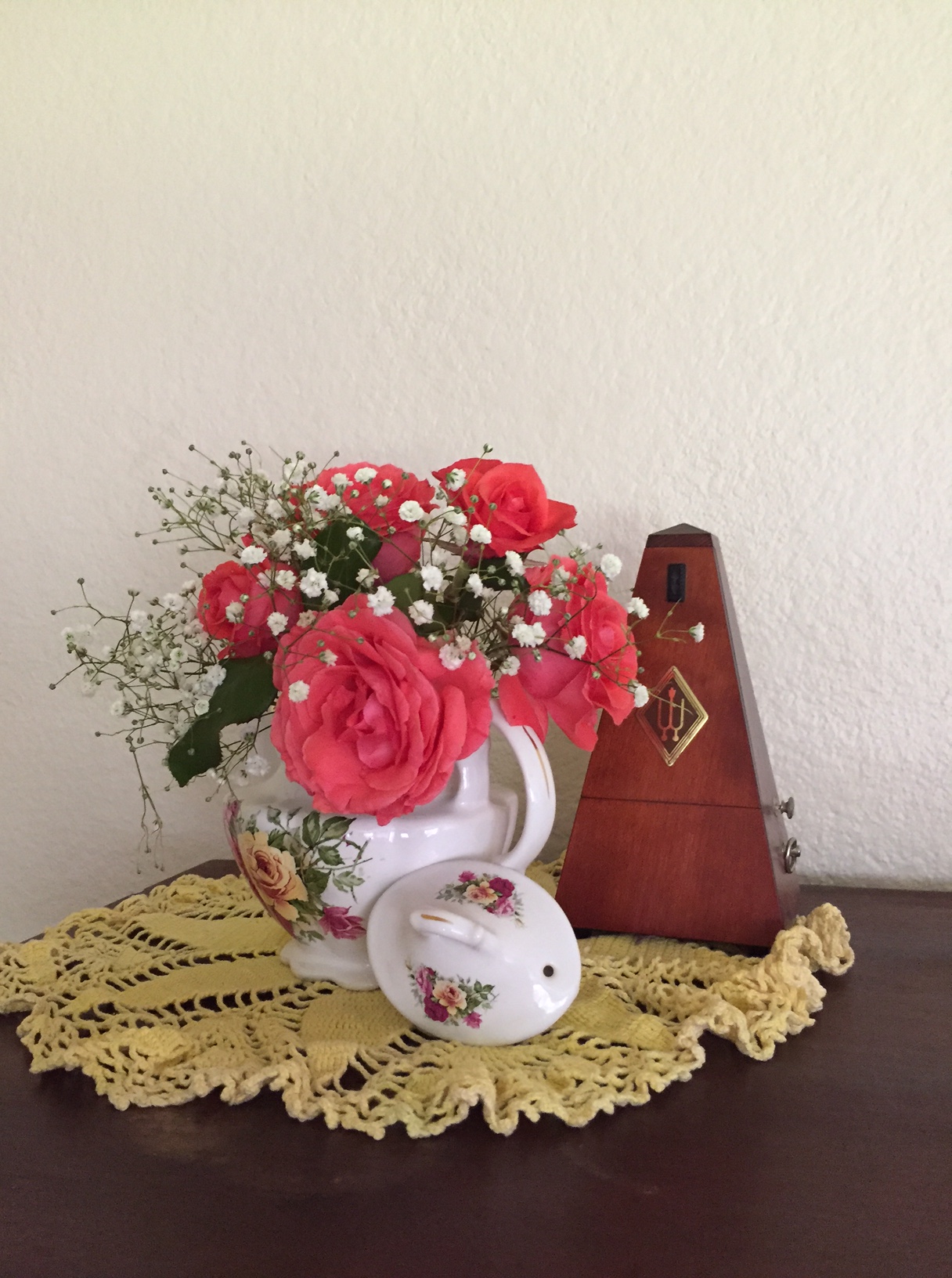 I bought 1–$5 bunch of Baby’s Breath.  I used teapots I own, and roses and violas from the yard.  I put one bouquet on top of the piano and one on the table.

I used a tea cup and put one in the bathroom to take the elegance even further.  No extra money involved. 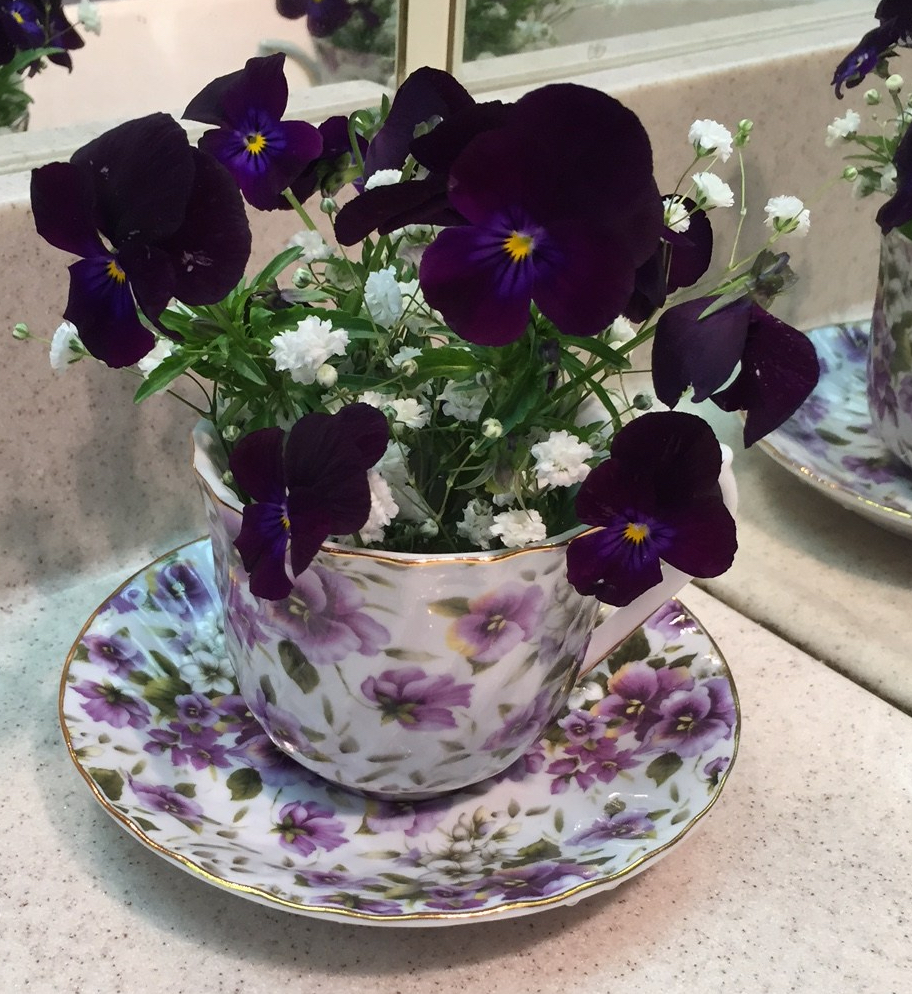 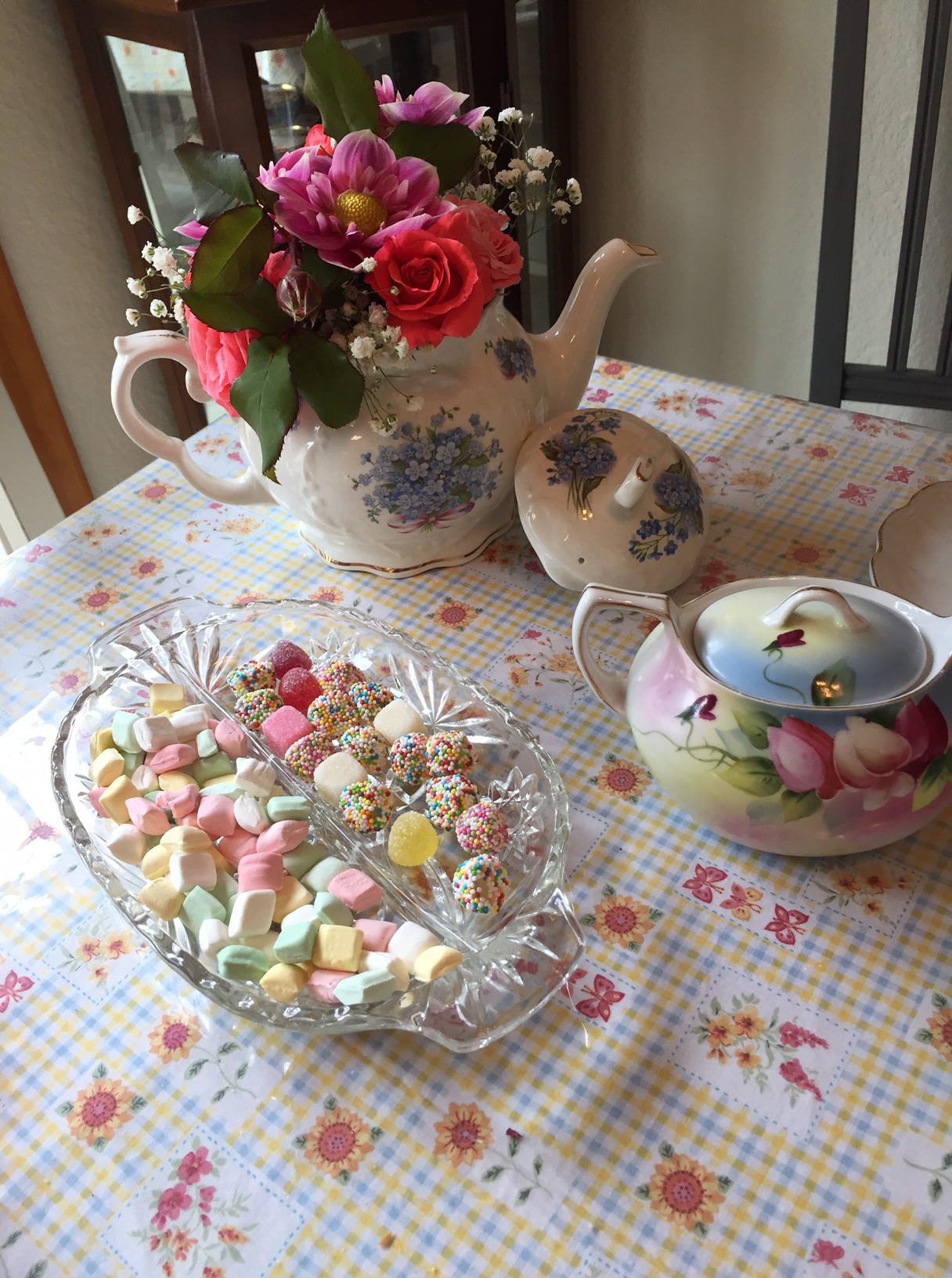 We bought some fancy mints and candy from the bulk bins at Winco.  We used sugar cubes in the sugar bowl.  The girls were excited about the cubes.  They emptied half the bowl. 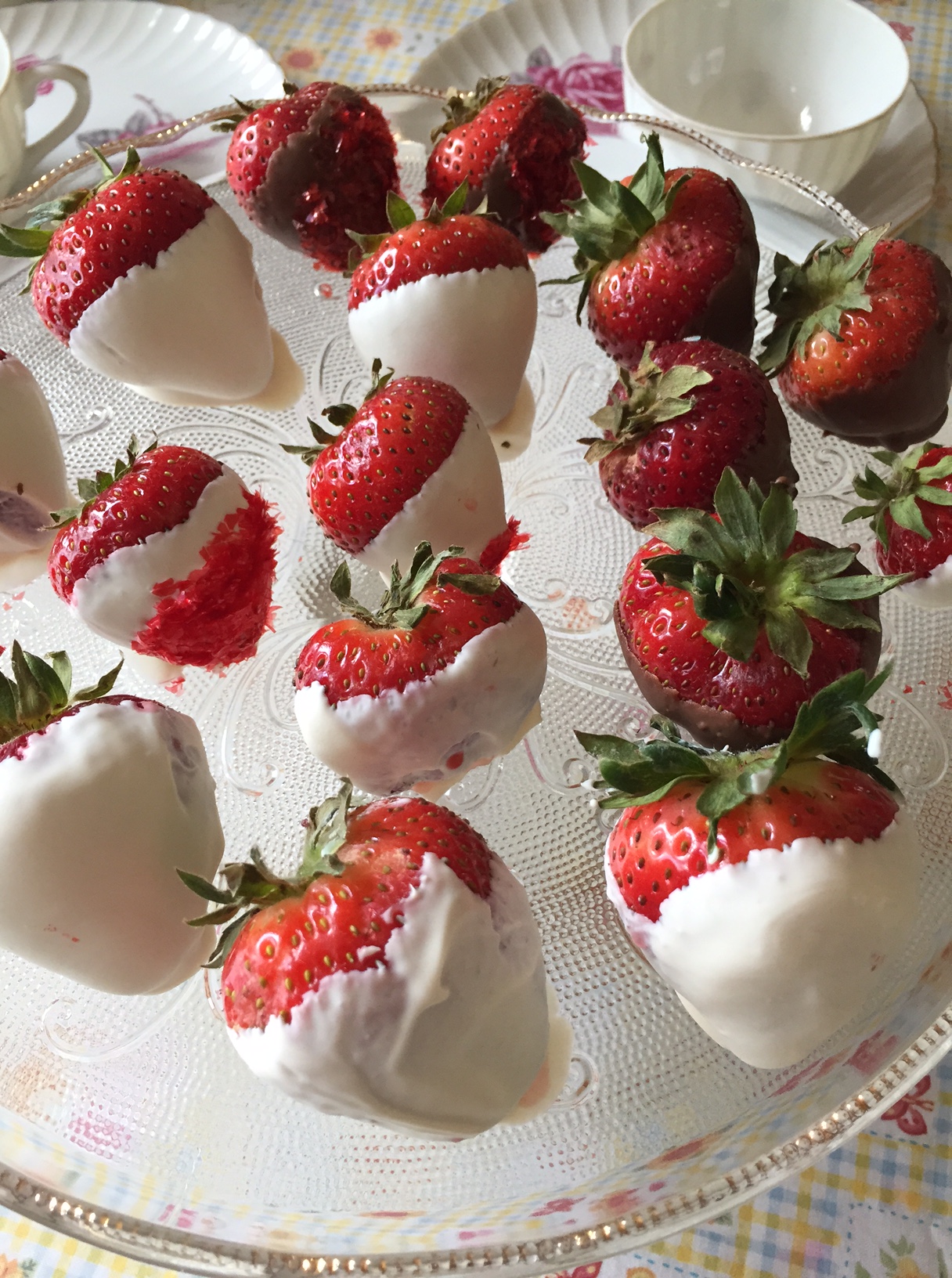 Ja’Ana and Alissa worked on the chocolate and white chocolate-dipped strawberries.  I bought one carton of berries and a few melting chocolate disks from the bulk bins at Winco.  Alissa brought some red sugar to use as well to make them even prettier.

I worked on pickle rolls.  They are very simple.  You spread cream cheese onto lunchmeat and put a pickle on it, then roll up and cut into circles.  It is a family favorite at holiday times and Patsy wanted the treat for her birthday party. 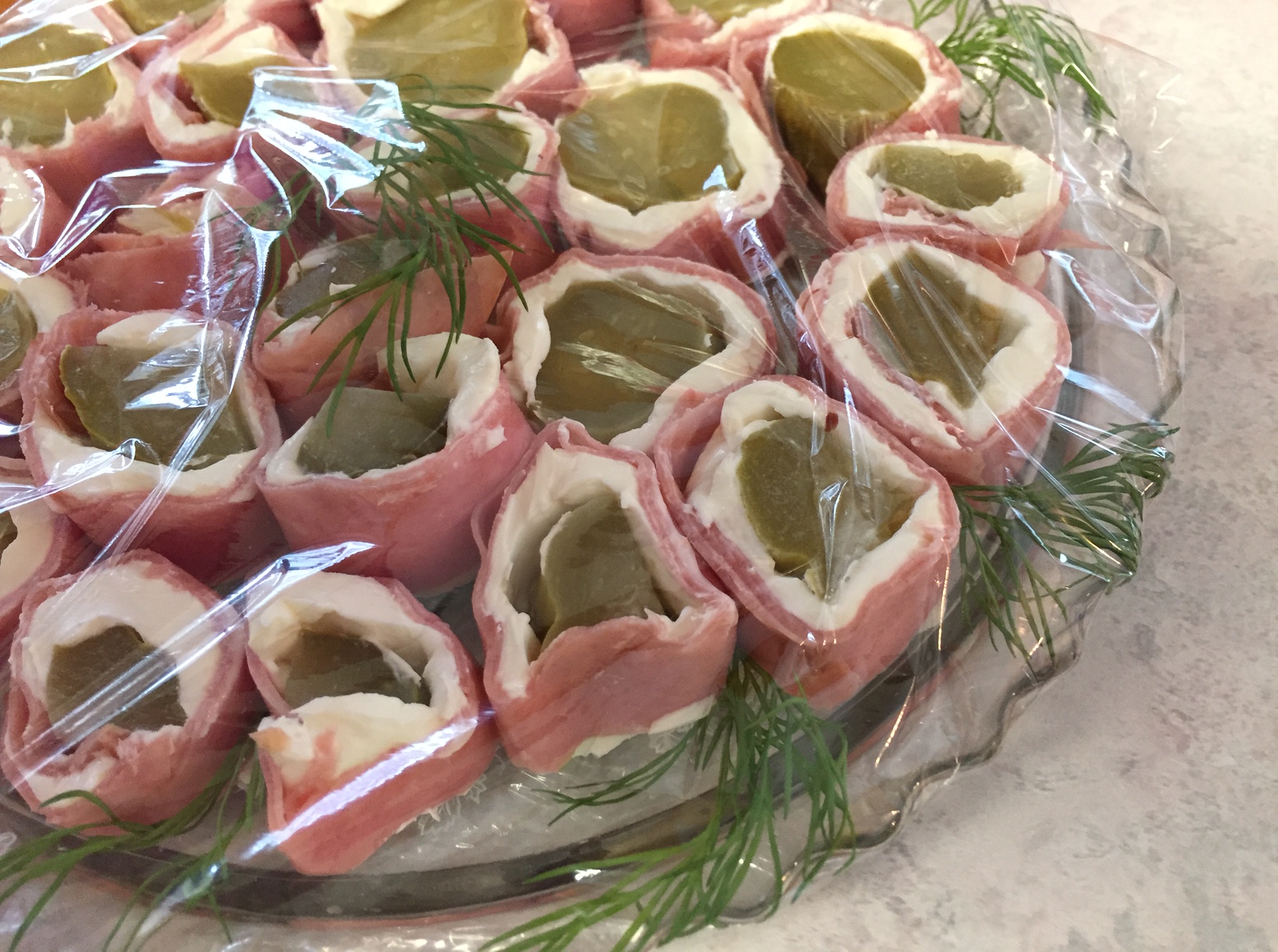 I worked on little sandwiches, too.  I cut white bread I got on sale for 69c for the loaf into circles with a biscuit cutter.  I threw away the edges.  If I was not gluten-free, I would have made crumbs from them, but we have no use for regular bread crumbs around here.  I just make and use gluten-free ones.

I used some of the circles for cream cheese/olive open faced sandwiches.  Then, I added 1/4 piece of turkey pepperoni on top.  I spread cream cheese, then placed 1 cucumber slice and a piece of dill on the rest.  I also made some egg salad sandwiches from whole pieces of bread.  I cut the crusts off  and cut into quarters.  I used fancy toothpicks for those.  I also made a veggie tray in a fancy dish.  Snow peas, the remaining slices of cucumbers, celery, carrots, and cherry tomatoes filled it nicely.

The last thing I served was zucchini chocolate chip bread, baked and frozen last week.  I also made 2 pots of tea.  I let them choose and they chose Chai and Peppermint.  That was easy enough, using my insta-hot on my sink.  We used 4 tea bags, total.

The girls visited for a bit.  They then proceeded to polish off almost ALL of the food on the table.  How gratifying!  I was very pleased that they were so verbally appreciative,  polite, and apparently very hungry!  Afterwards, they went outside and played croquet on the lawn until it was time to go home.

The items I made this food from were all inexpensive, common ingredients.  It was the fancy dishes, the flowers, and making all the food tiny, decorated and fancy that made the tea party seem special. I did as much of it ahead of time as I could, even freezing a couple of items last week. I shopped yesterday for the things I needed.   I washed dishes as I went, and then put all the fancy dishes away directly after the guests went home.  I cleaned the house first thing this morning and some more after lunch.  That is something that would just have to be re-done if I did it too far ahead:)

I made a list of food I wanted to serve on the whiteboard as I thought of it, and then used the list to shop and cook.  I bought dill and used it more than once to get the best use of my purchase.  I did the same with the Baby’s Breath.  I figure if I’m going to buy it, I want to use it a lot.

So, I’m very tired, but satisfied and happy.  Patsy had a great party, I did not break the bank, we DID have some girls come to the party and they had a great time, my house is clean, and I have bouquets of flowers to look at.  I should sleep well tonight.