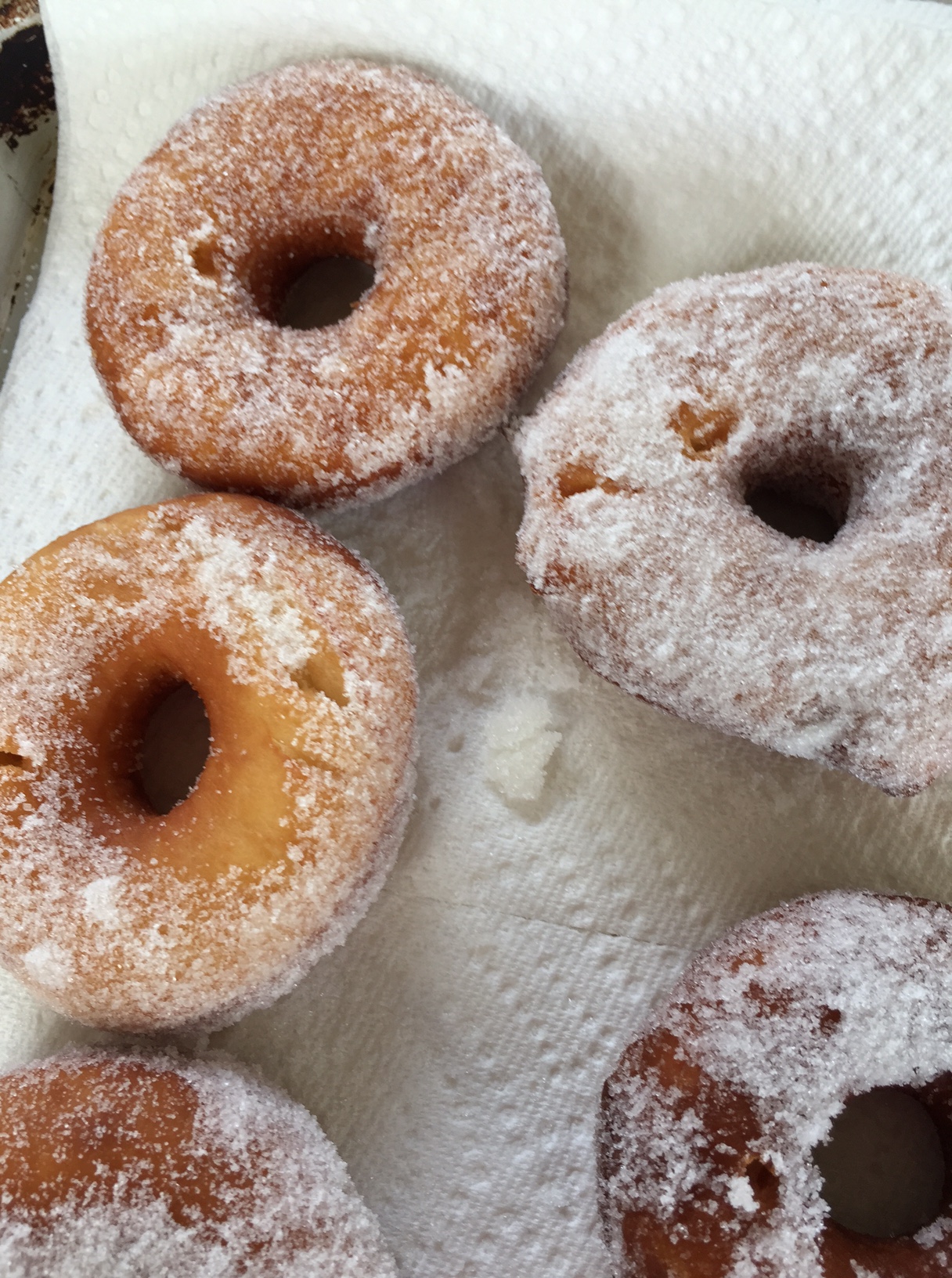 Birthday party #2 for the week was a huge success, thanks to the help of the aunties, uncles, parents, and cousins!  Whew!  This party was for Ja’Ana’s 17th birthday, and she really wanted fresh donuts–the raised kind with sugar on them that only Auntie Rosalie can make the way J wanted them. 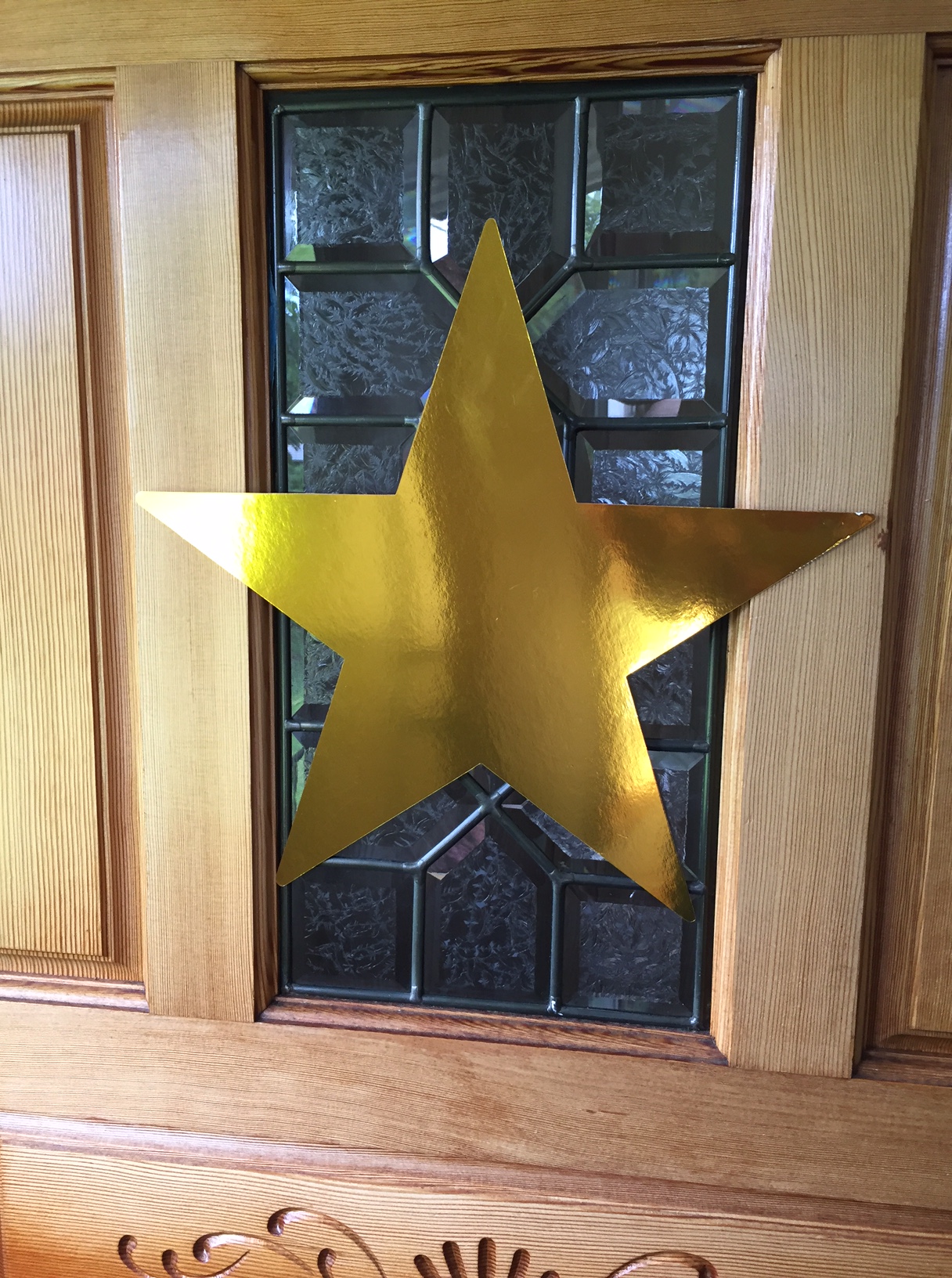 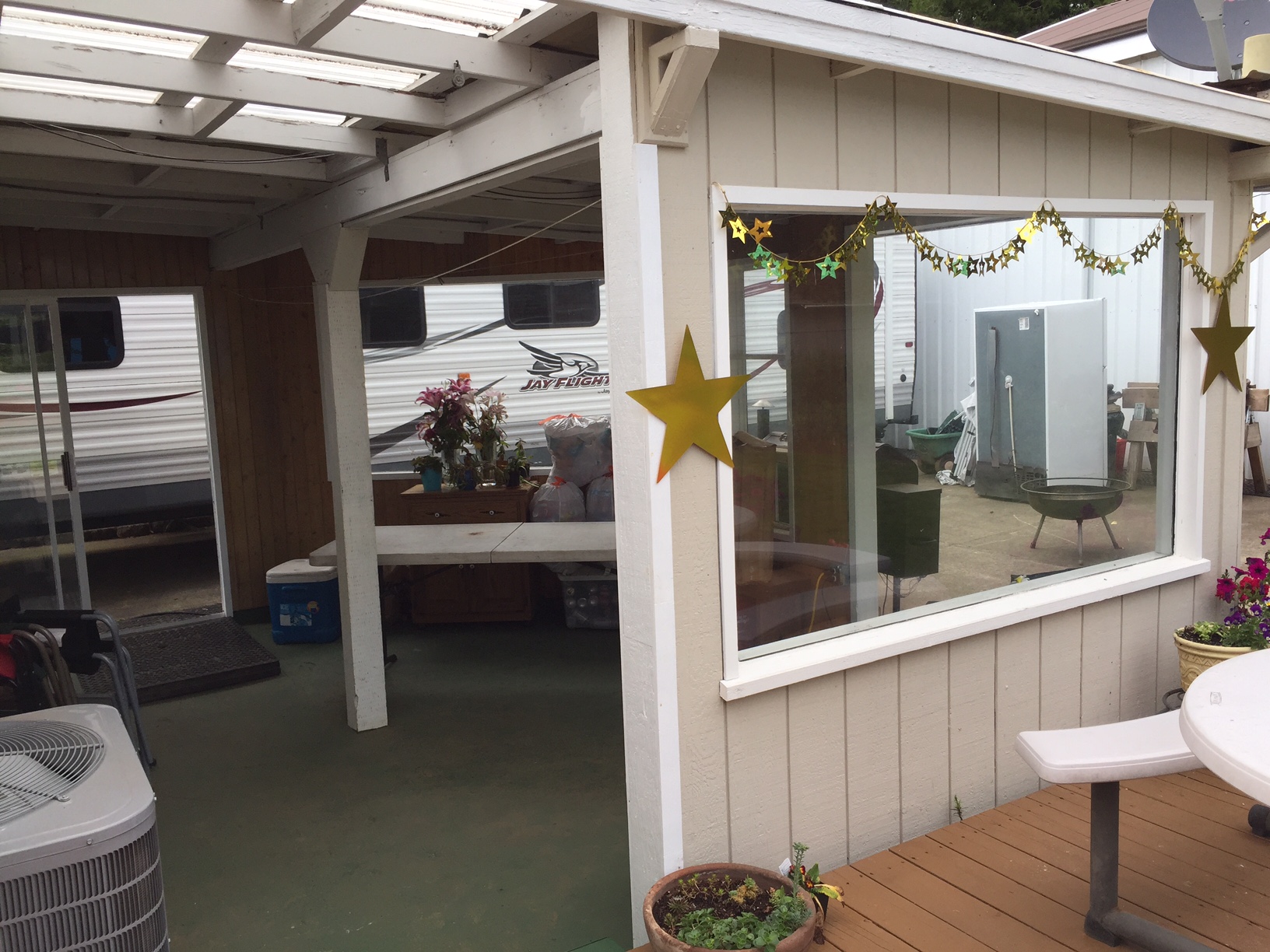 The decorations were very simple.  Ja’Ana chose gold stars, a garland, gold paper plates and 1 black and 1 white plastic tablecloth from a party store so she could have the theme she wanted.    The rest of the decor and paperware were gathered from less expensive sources.  The plastic silverware was from Winco, the cups and napkins were free from some we had been given a while back.  The invitations, plastic ice cream bowls, and gold ribbon to curl onto the table were from the Dollar Store.

We have an outdoor covered porch next to our deck and the weather cooperated so we could have the entire party outside. 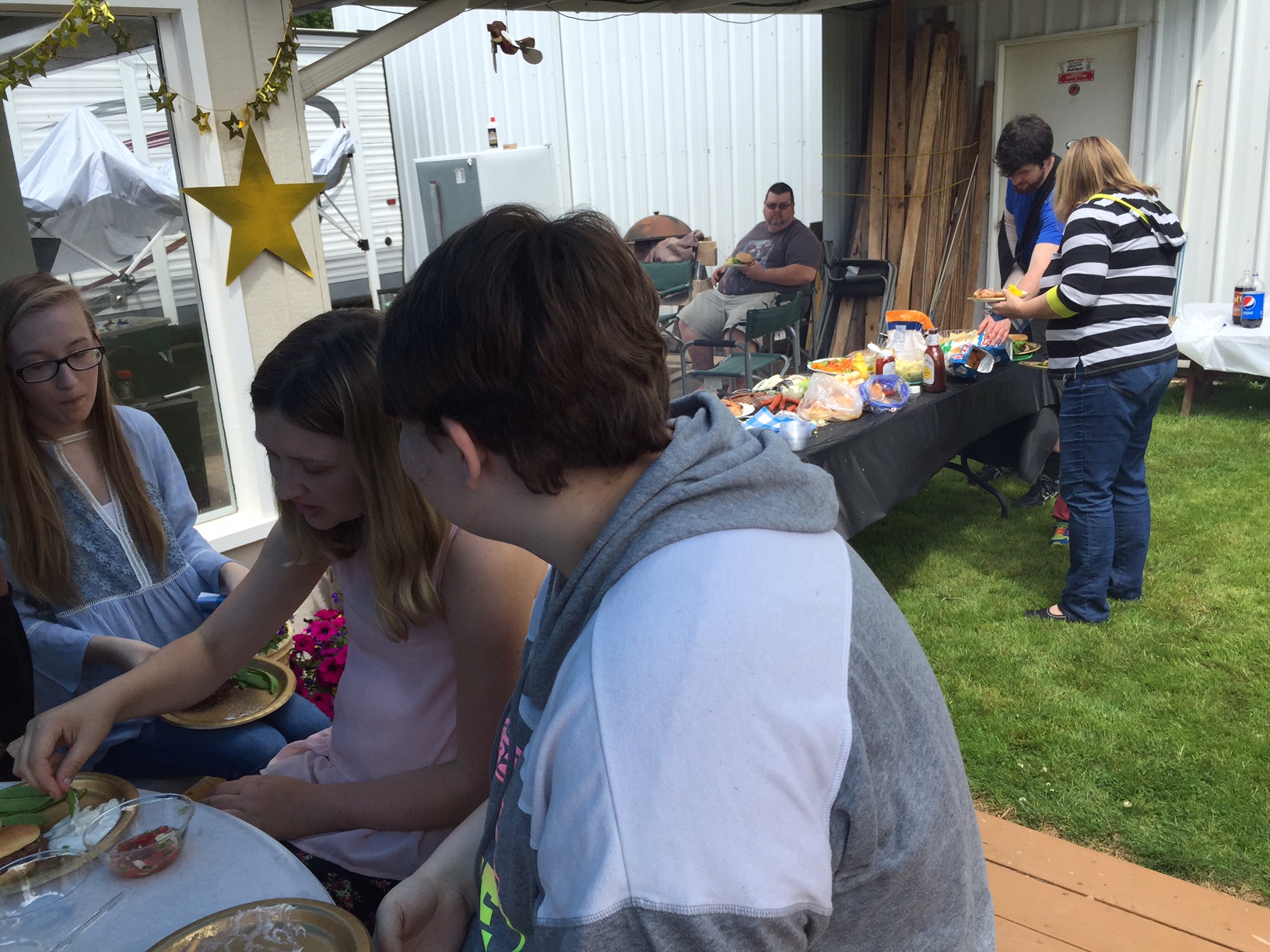 This isn’t the best picture, but it gives the idea–drinks on a tiny picnic table on the right, and food on the big table which was on the grass next to the concrete–just in case the grass was too wet.  There was some ice in the cooler, which they used as the afternoon wore on and the drinks were getting warm.  I might get a bowl and some tongs next time.  It was a little awkward getting the ice out of the bag out of the cooler……you get the idea. 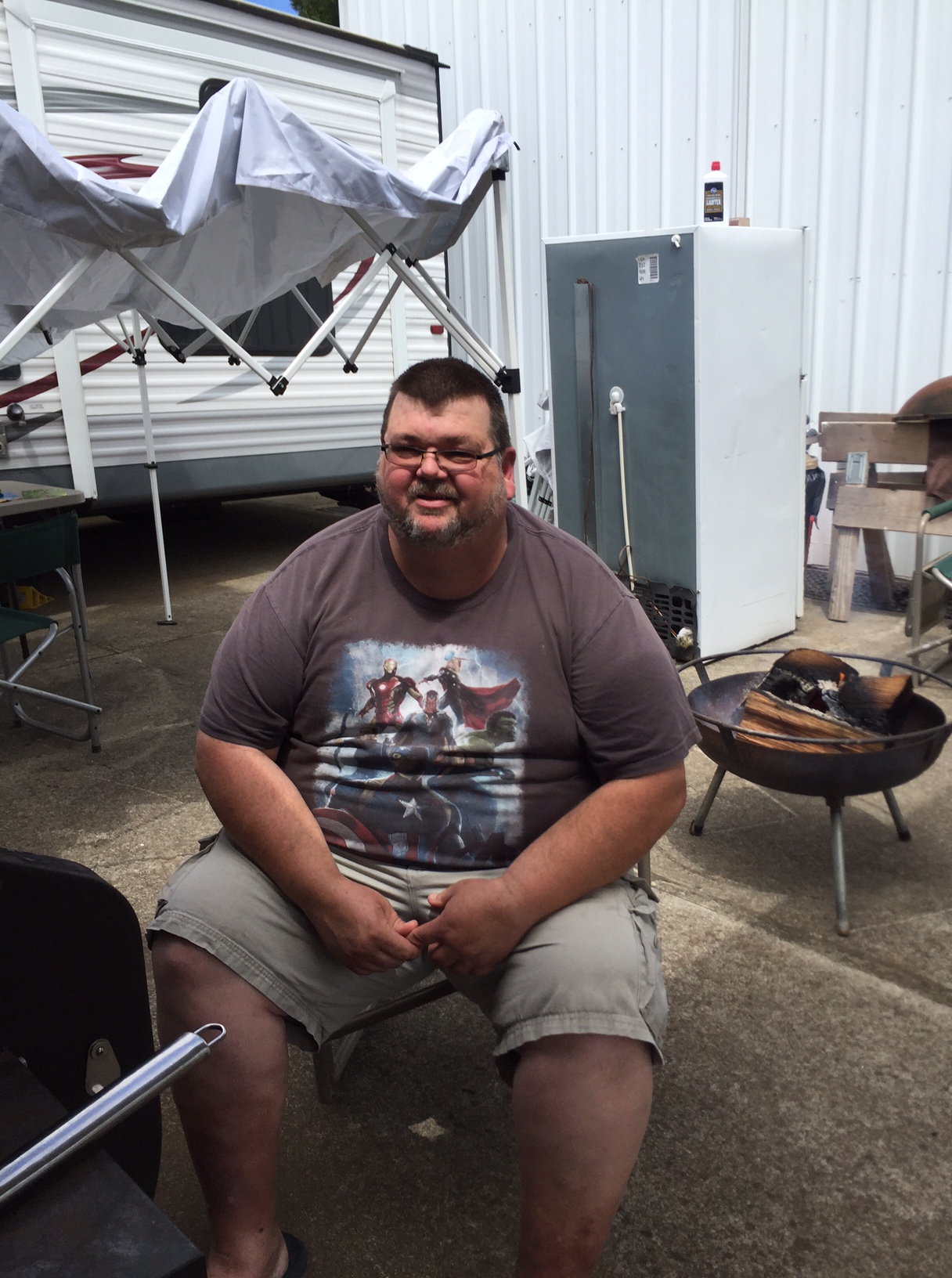 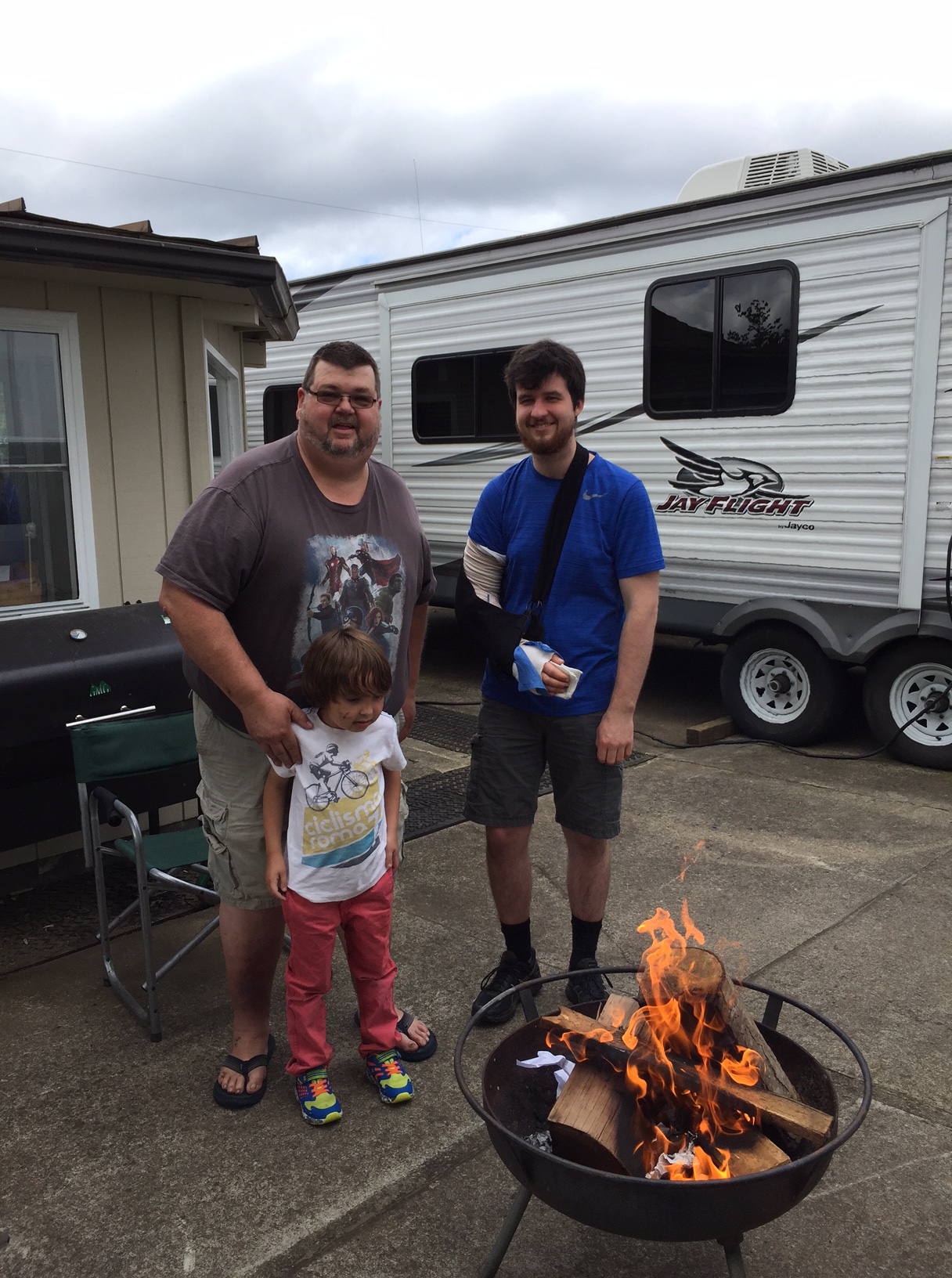 Rob, and 2 nephews, Jake and Steven, lit a fire in the portable fire pit.  Ja’Ana thought some might want to roast marshmallows, but no one roasted even one.  We had an abundance of food, and they filled up on other things.  No worries, we’ll take the marshmallows camping.  Jake looks worried, but he was actually proud of himself for being part of that project!  We all enjoyed the time with Steven.  As these kids get older and older, it’s harder to find the time to be with them, so we were thankful for his presence today.

We kept the food simple, inexpensive and tasty.  We have hamburger from the 1/2 beef we purchased last fall.  I got hot dogs for 68c/package and buns for 88c/package.  We also had chicken drumsticks, and I bought about $5-6 worth–a big package.  I made home-made potato salad, which is always a money saver.  I picked lettuce for the burger toppings, added an onion and sliced tomatoes from the store.  One of my sisters put together a veggie tray using snow peas from the garden, and some veggies from the store, such as carrot sticks and celery.  I’ve been buying and stashing $1/2-litre bottles of soda and $1.88/package chips for a few weeks.  I got some of those things during the Memorial Day sales and hid them in the camper.  My other sister graciously brought all the donut-making items, including dough, oil and fryer.  I also made a big nacho dip using refried beans I made and froze last week, and put out corn chips that I had packaged into Ziplocks after buying the huge Costco bag for under $5 a few weeks ago.  Putting them in the gallon bags keeps them fresh.  We used the last 2 bags (probably about $2 worth).  I got bulk candy from Winco to scatter around to make the tables more festive. 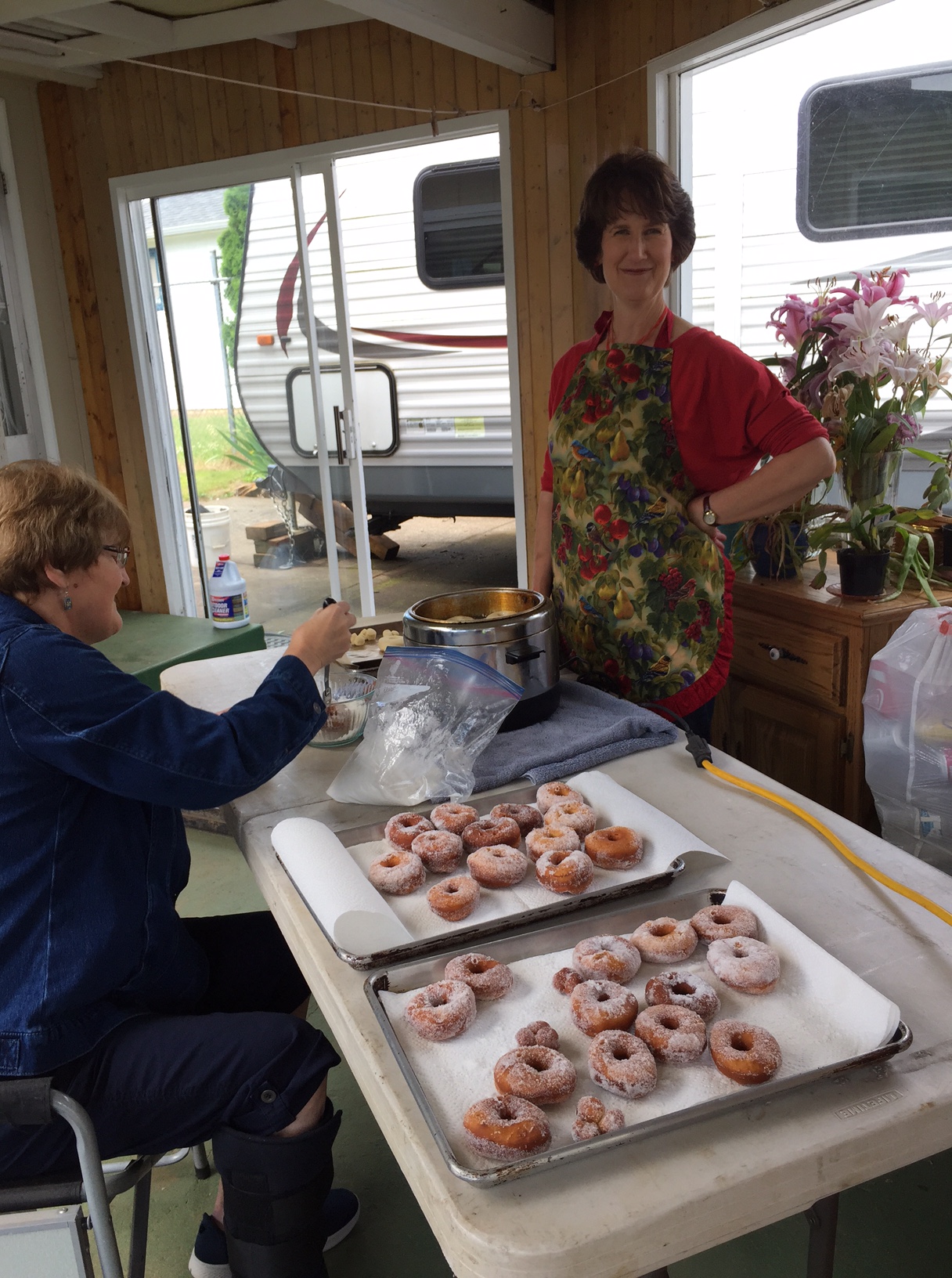 And then, the extremely popular donut crew!   Auntie Rosalie and Auntie Jan were the donut makers.  One girl confessed as she was leaving that those were the best donuts she had ever tasted, and she had eaten 3. 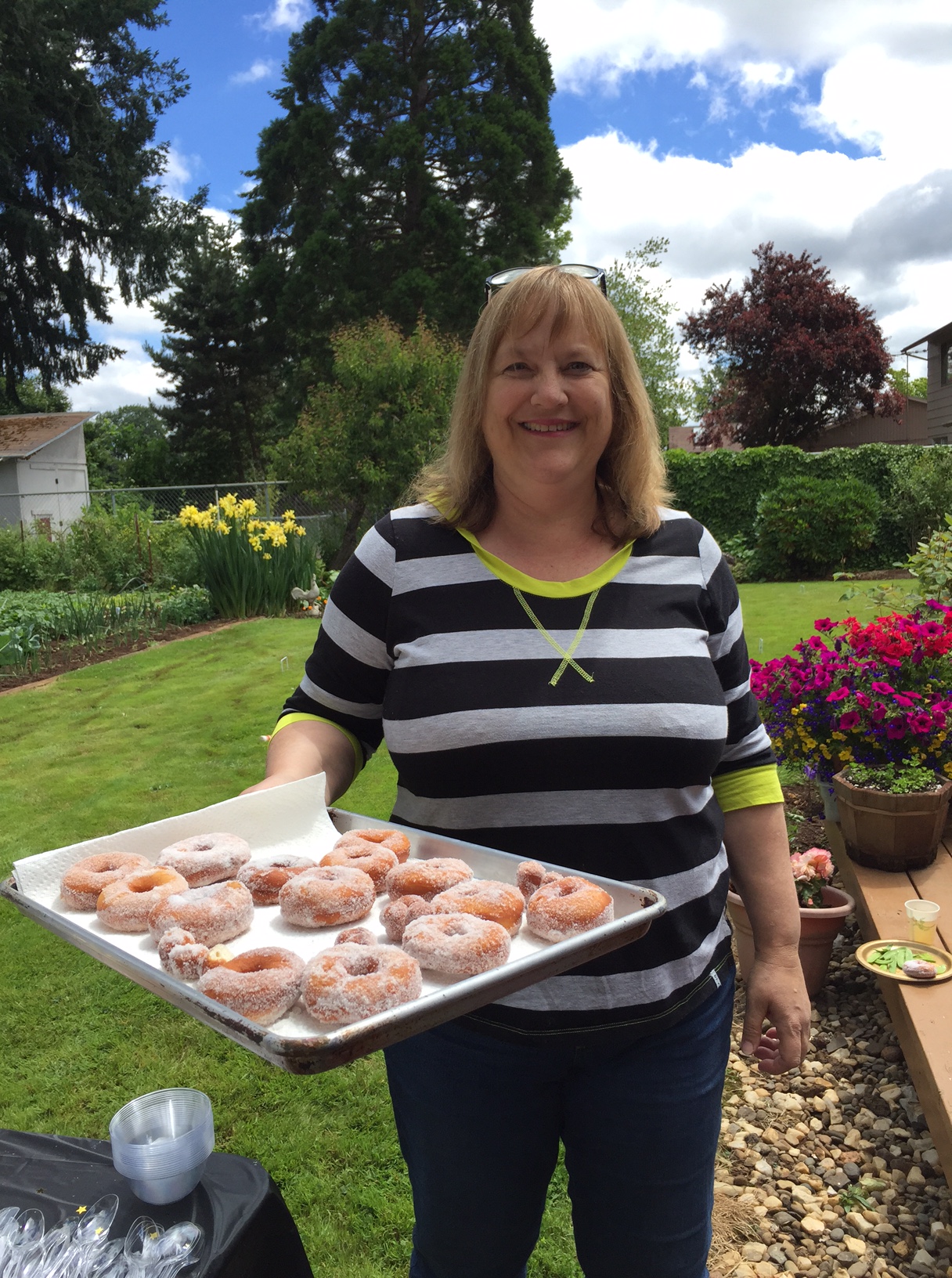 Auntie Gail passed them around.  Michaela (her daughter) and Ron (her husband) stopped by for a bit on their way to the horse ranch where Michaela volunteers.  We enjoyed seeing them, too.  Alissa and Jake both stayed for the entire party. 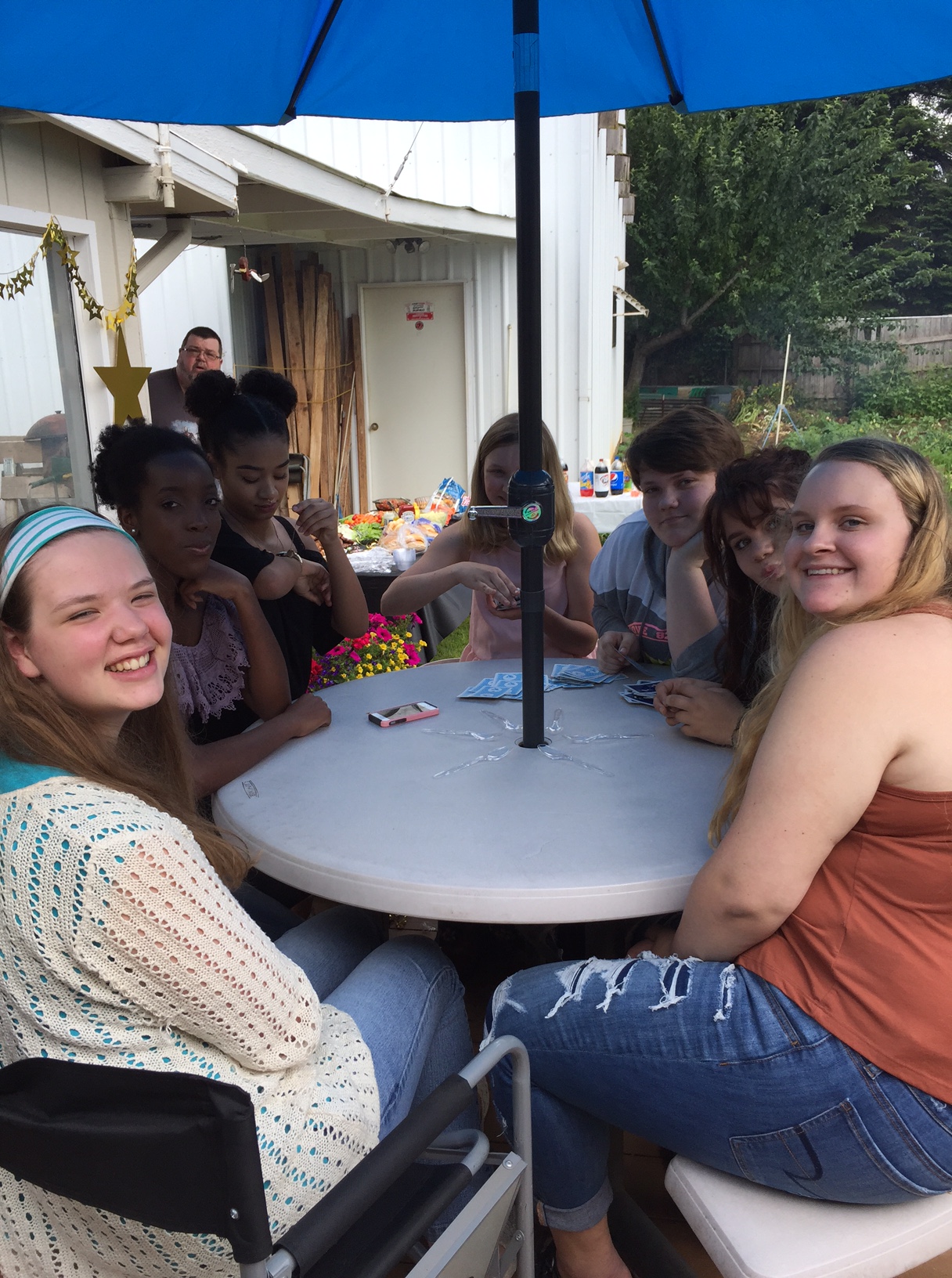 There was another girl who does not show in this picture.  In my mind, the perfect number showed up–enough to have a great time, eat a bunch of food, and to easily fit in our yard and deck.  One of Ja’Ana’s friends from before we moved drove clear down here to join the party, and made Ja’Ana feel very special and loved.  The new friends were very kind and gracious and made her feel welcome–they are a lovely bunch of girls. 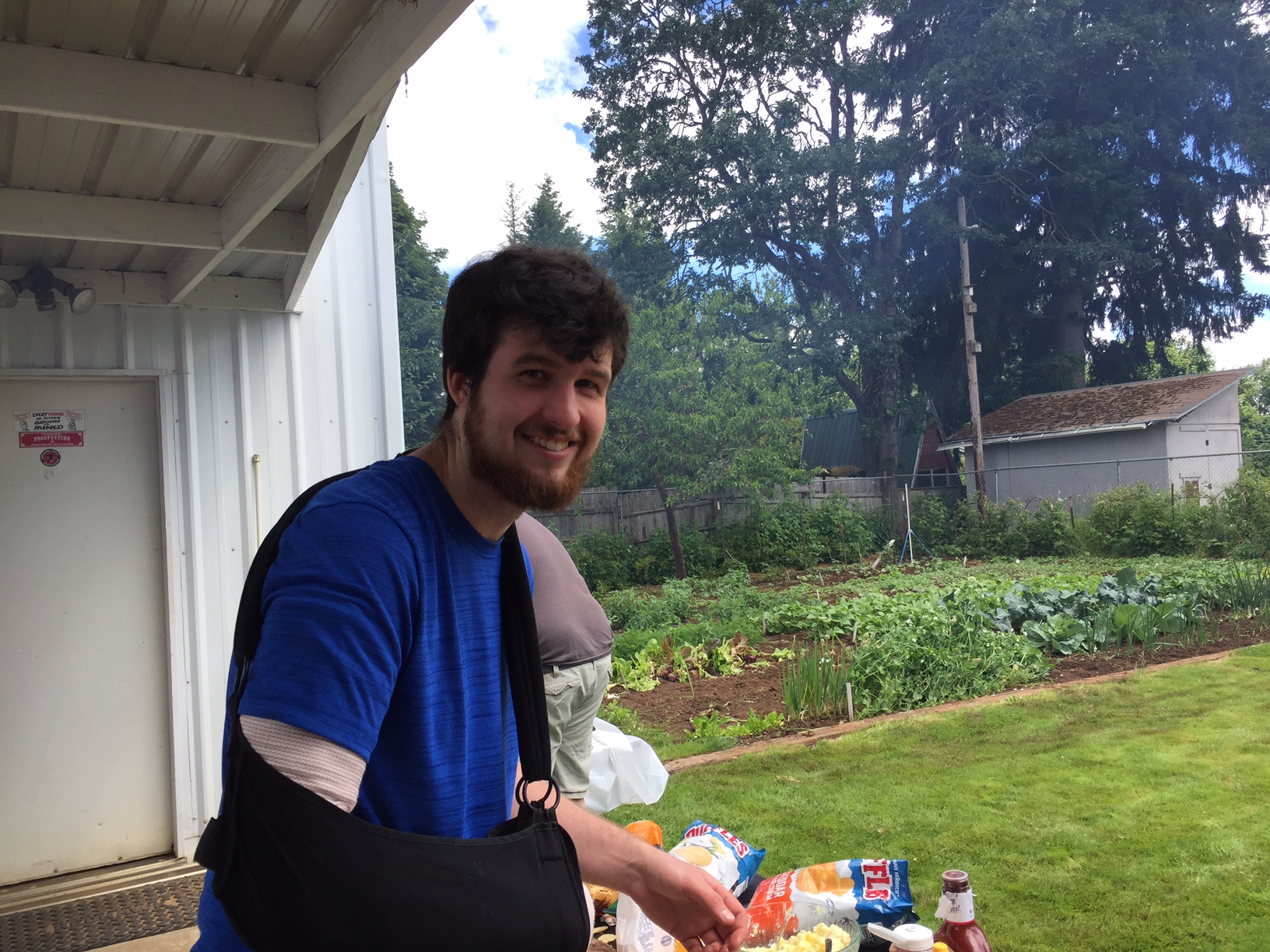 And, the relatives.  What a blessing they are to us.  So supportive, generous and kind.  I’m very thankful for their part in making J’s birthday so special.  And, I’ll have to say, we had a very nice time visiting with each other during the several hours we had together.  It feels good to put my feet up tonight.  This has been a busy week.  Now I can bask in the memories and the feeling of a successful week of birthdays:)