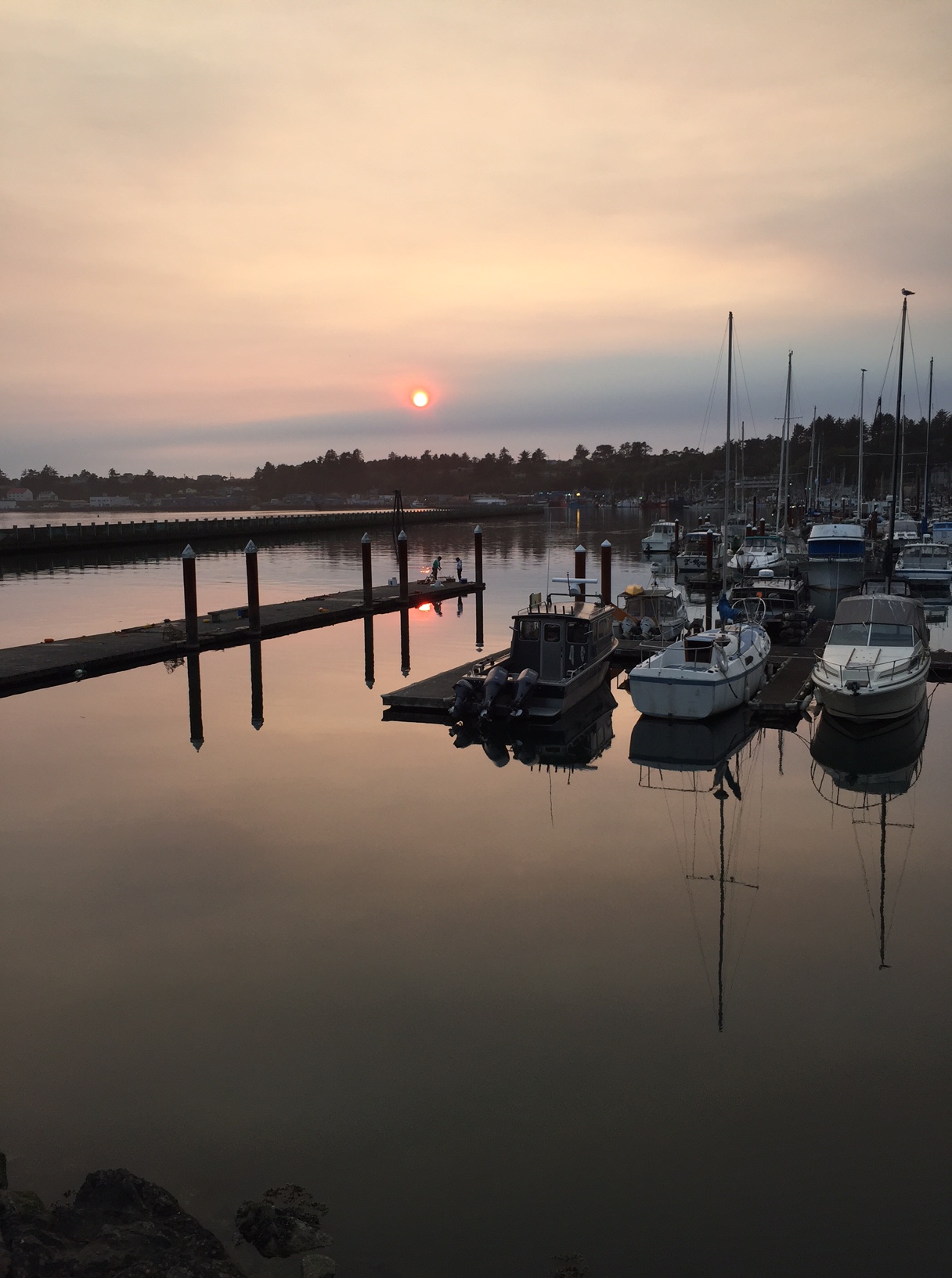 Where have 35 years gone?  It amazes me how quickly they have gone–full of good times, wonderful times, really horrible times, and day-upon-day of everyday, ordinary times.  It doesn’t surprise me, really, that we ended up back at the Oregon Coast for this anniversary.  We went to the beach for our honeymoon, at least the first half.  Then, we went camping for the second half.  Some things don’t change much after all. 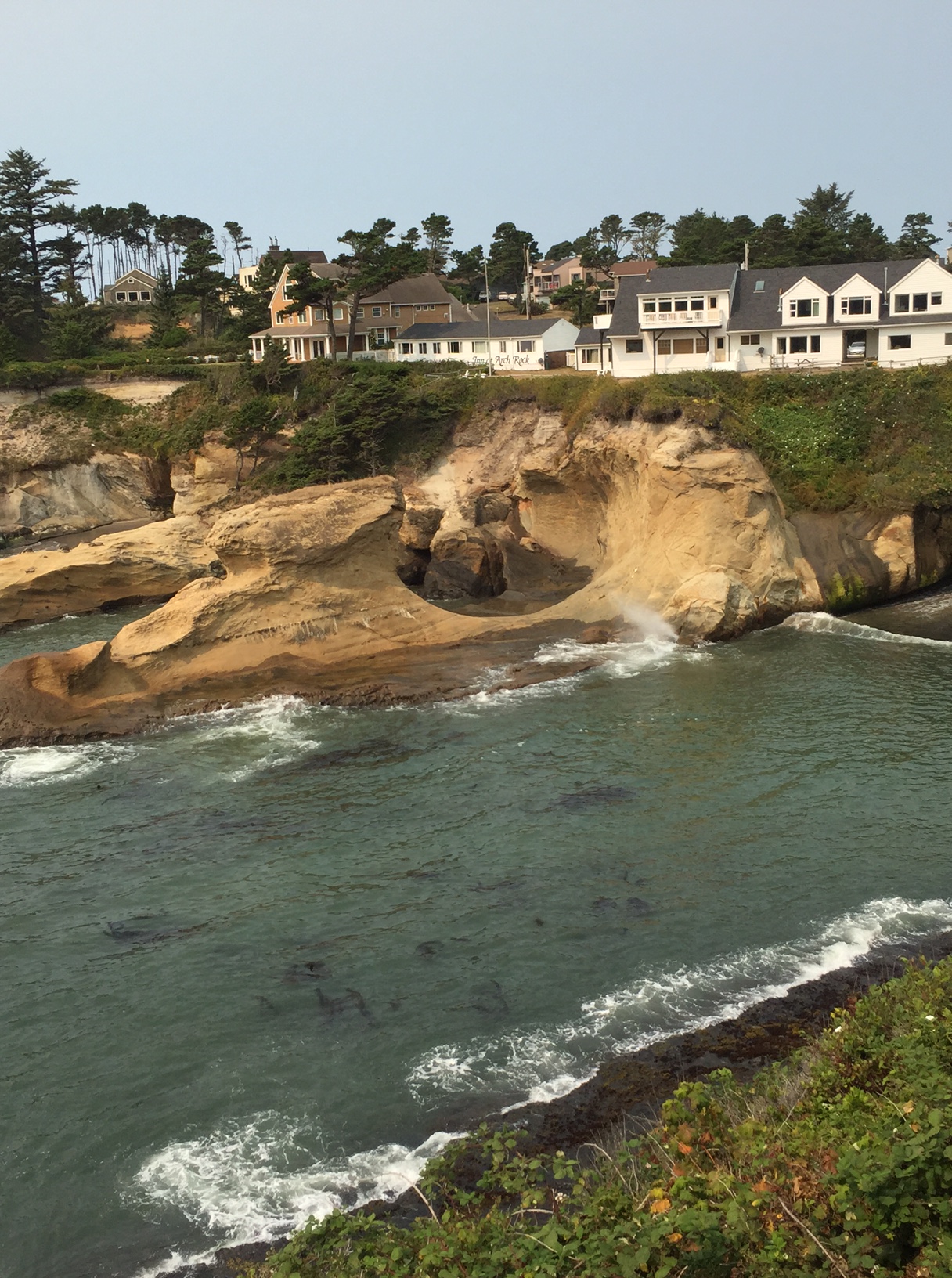 We still love the ocean. 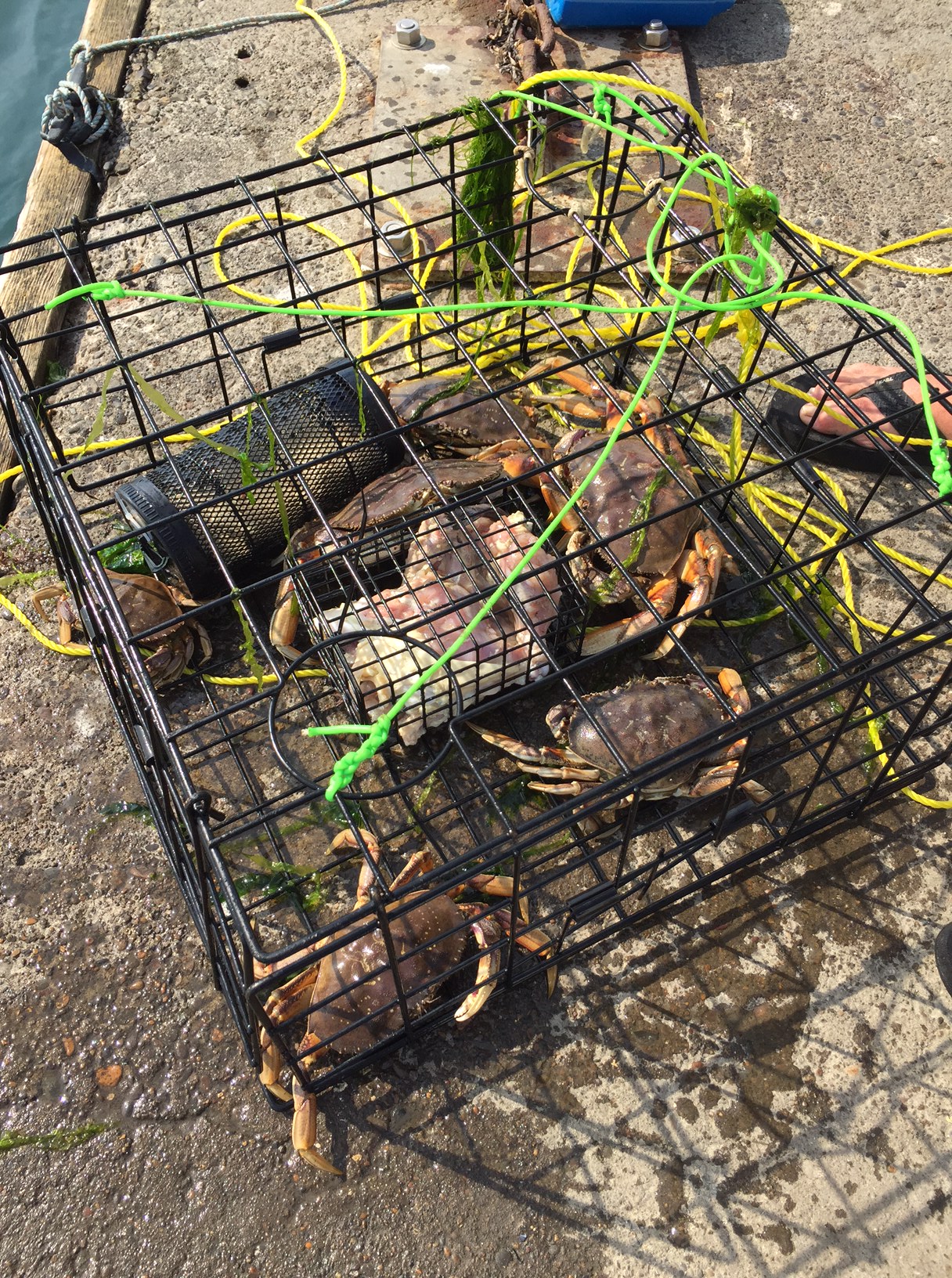 We still love outdoor activities.  We spent quite a bit of time this weekend crabbing off the dock at our hotel.  That is one of the reasons we chose that particular place to stay.  You need a keycard to access the dock and you can leave your traps in all night.  The crabbing was really great.  We caught many, many keepers and they were unusually large for crabs caught from a dock.  The limit is 12 per day.  That would be 24 for the 2 of us.  We arrived on Friday and left on Monday.  That was potential for 96 crabs.  We landed a little over 30 and were overwhelmed with the amount of crab we had.  It was just the right amount.  We filled a cooler as it was.

There is a crab cooker at the hotel.  We spent quite a bit of time waiting in line to cook our crabs, cooking them, cleaning them, cooling them, etc.  It was fun visiting with all the other people.  They were from so many different places and we heard story after story from so many, each beginning with the same words–“How did you do?  Any keepers in your trap this time?”–and ending with anything from a childhood antidote of a rattlesnake bite to the grandiose fishing stories from a man who had drank one too many beers.  We shared the dock with people from Russia, Korea, Mexico, and Slavakia (I’m sure that’s not spelled right-sorry) and more, but all Americans now, all united in the quest for crab.

After watching a boy try to fish, and fail to catch anything due to his inexperience in tying on his tackle,  Rob showed the young man how to rig up his pole correctly, gave him some bait,  and the teenage boy caught his first fish–ever!  He then wanted to fish for hours, far into the night.  It was a feel-good moment, for sure.  The next night, he was back, after a trip to Walmart, fully loaded with all the right bait for both himself and his brother, and taught his mother to catch her first fish–ever! 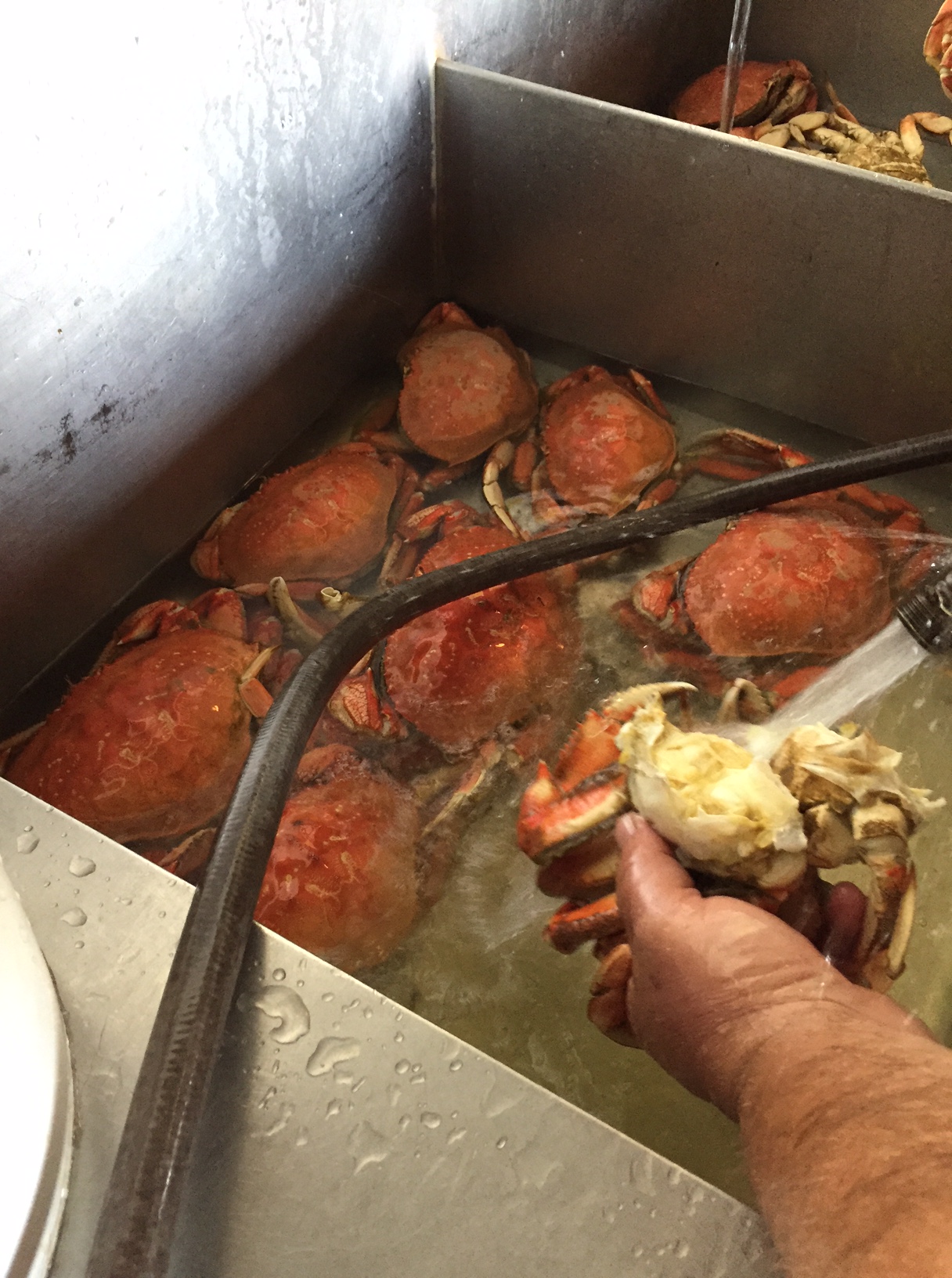 We were delighted to be able to share crab with family and friends today, and I’ve spent this evening cracking out the ones we kept.  I didn’t think I kept very many.  I was wrong. 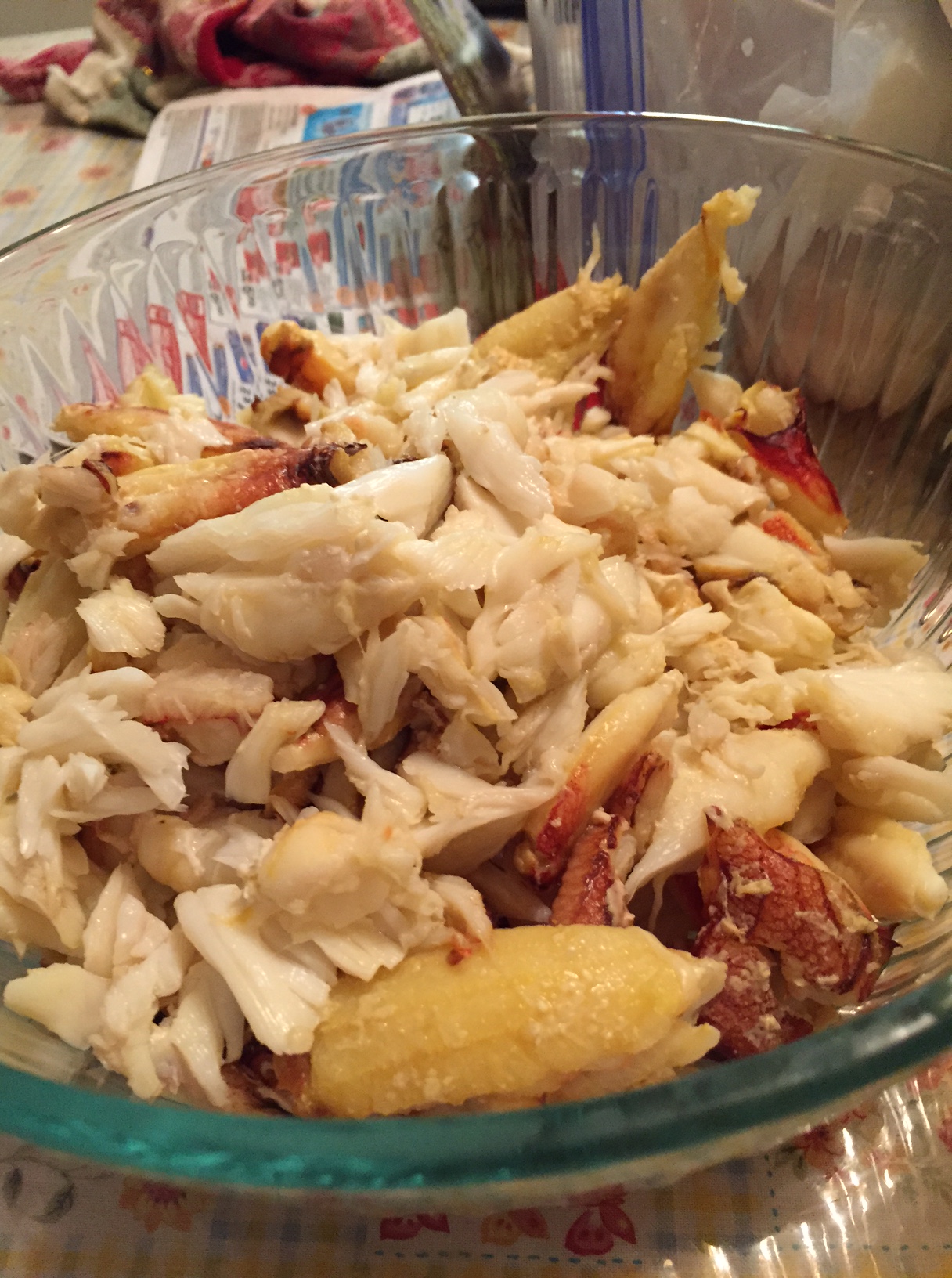 It’s in the fridge.  It’s midnight.  I will deal with it in the morning.  What a treasure! 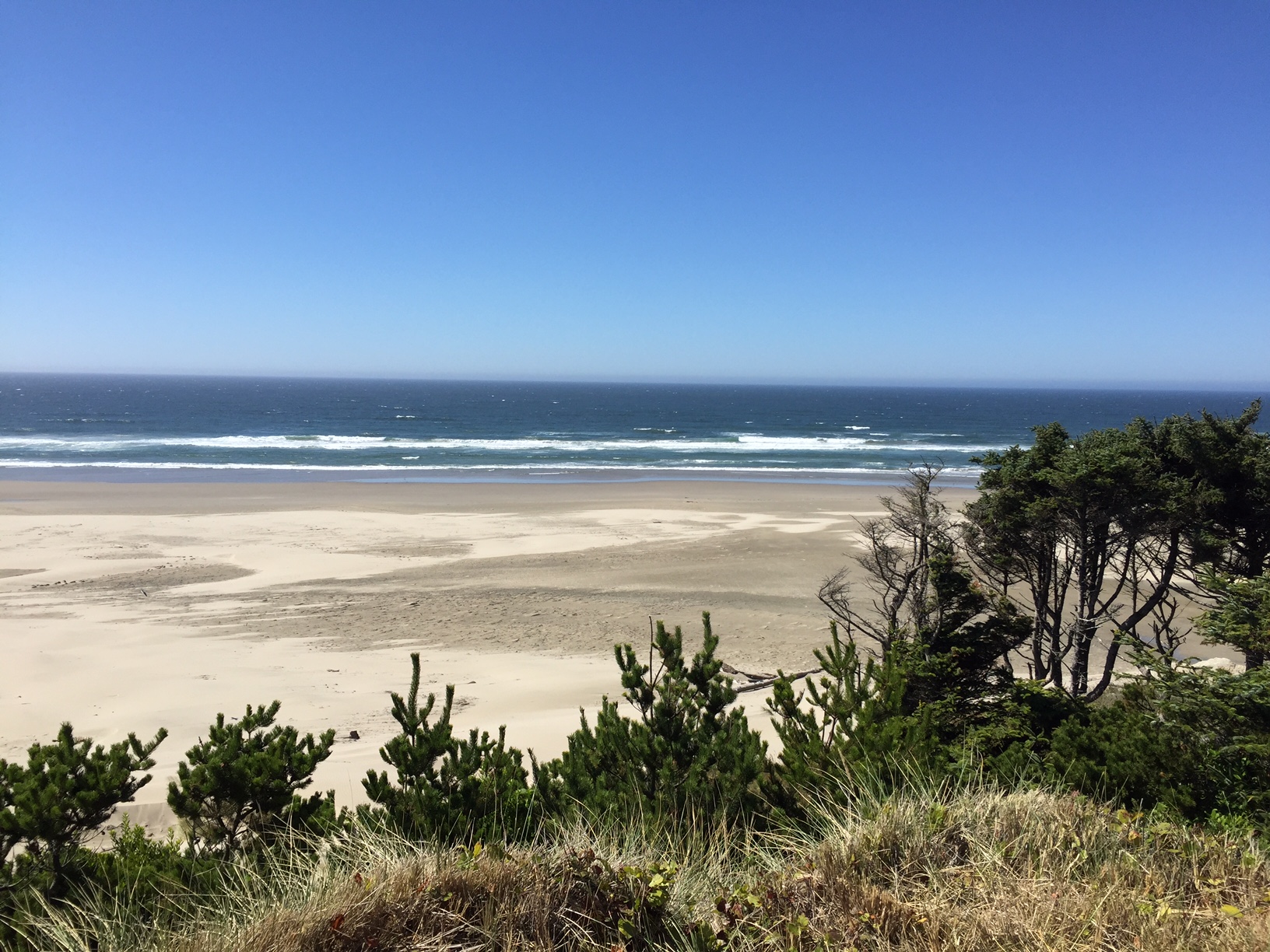 We also took a couple of drives.  We saw whales on Friday, and again today.  We never tire of seeing the white spouts, or an occasional tail or back showing darkly against the blue water.  Even when there are no whales, the view is breathtakingly beautiful. 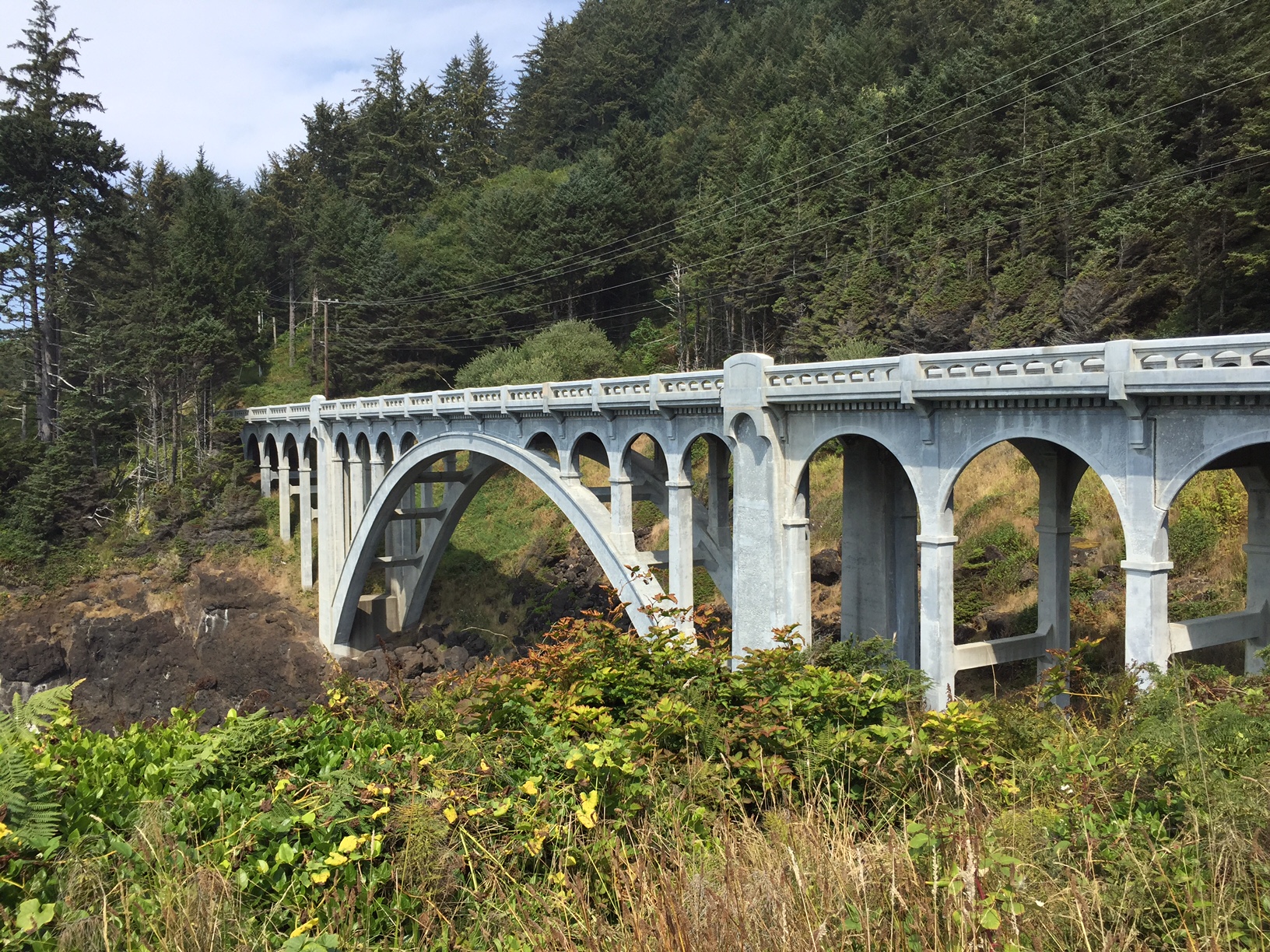 This bridge caught my eye, too.

We enjoyed the whale watching, driving, crabbing, some fishing, and a special anniversary dinner out.  We walked along the waterfront a little, and bought some candy to bring home to the girls.  Today, we had lunch out again, on our way home.  I loved the entire weekend.  The best part–after all these years, I still love the man I married so long ago, and he still loves me.  That is the biggest miracle of all.

The first part of the week was busy, getting things canned and preserved so I could leave.    We did do some frugal things before we left. The anniversary trip was wonderful, but I didn’t worry much about frugality, other than the habits I kept finding myself returning to….such as cooking in the room most of the time, not doing a lot of shopping, etc.  We did catch hundreds of dollars worth of crab, though–nice bonus. 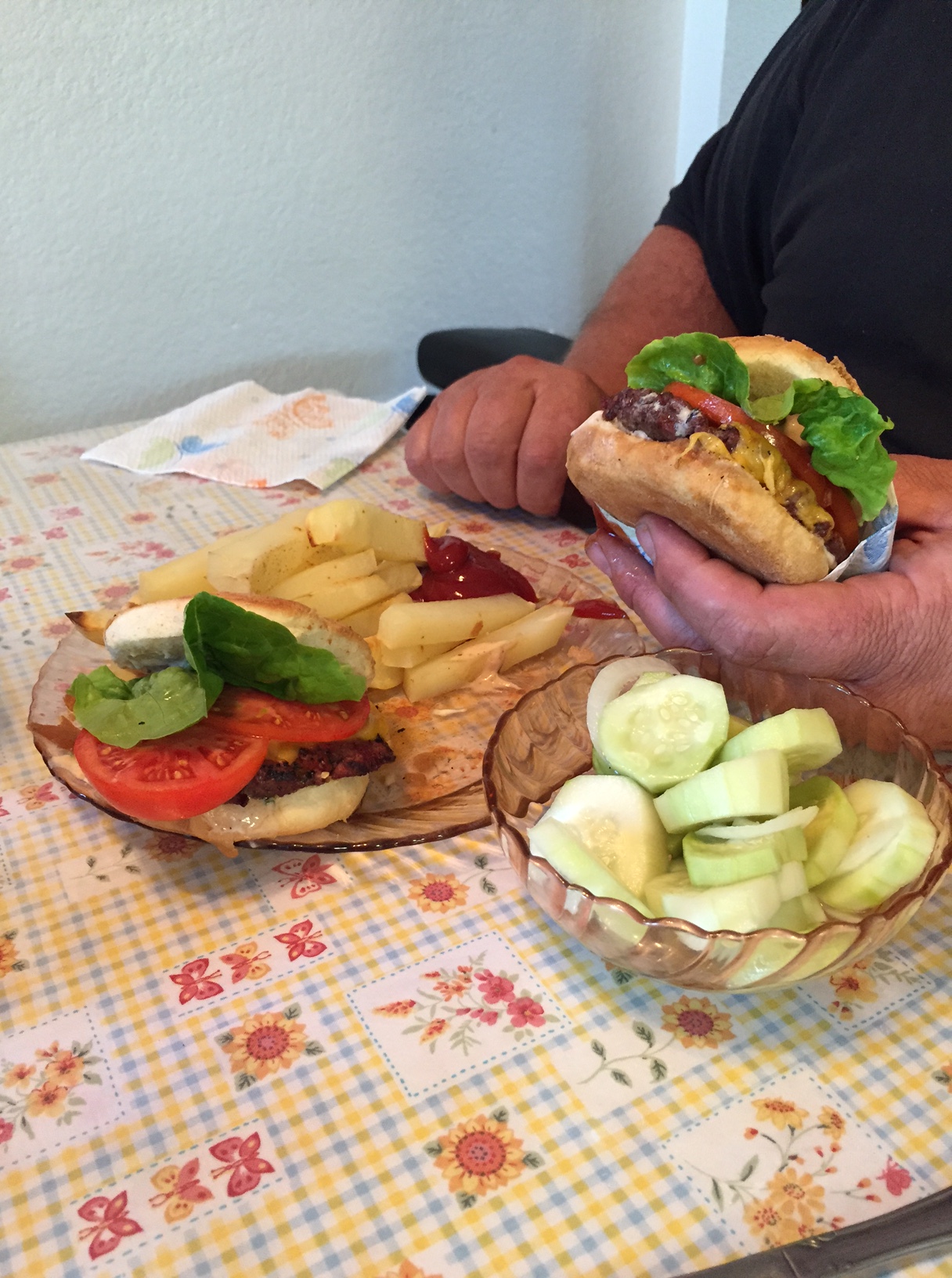 I served lots of garden-based meals.  This meal is a hamburger with garden tomatoes and lettuce, garden cucumbers and onion salad, baked french fries from garden potatoes and a sauce I made using herbs from the garden.

I bought school supplies on sale.

I was given some corn, peaches and prunes by my sister when I dropped by to give her some crab.  Some of the corn was already in the cartons for the freezer.  Amazing what grows on her bushes:)  Actually, the family did some for me today while I was gone.  They had a corn-freezing party today.  Pretty nice of them, I think.  I made a peach crisp for Rob to take to work tomorrow–he has his first day.  There is a potluck there.  The kids start Wednesday, but he needs to go tomorrow, too.

We attended an Eritrean party on Thursday.  The food was authentic, and the party was really fun.  It was to celebrate Danait and the fact that she is getting to be such a big girl, and for Harnet, the mama, to be able to thank some people who have helped her along over the past few years since Danait was born. 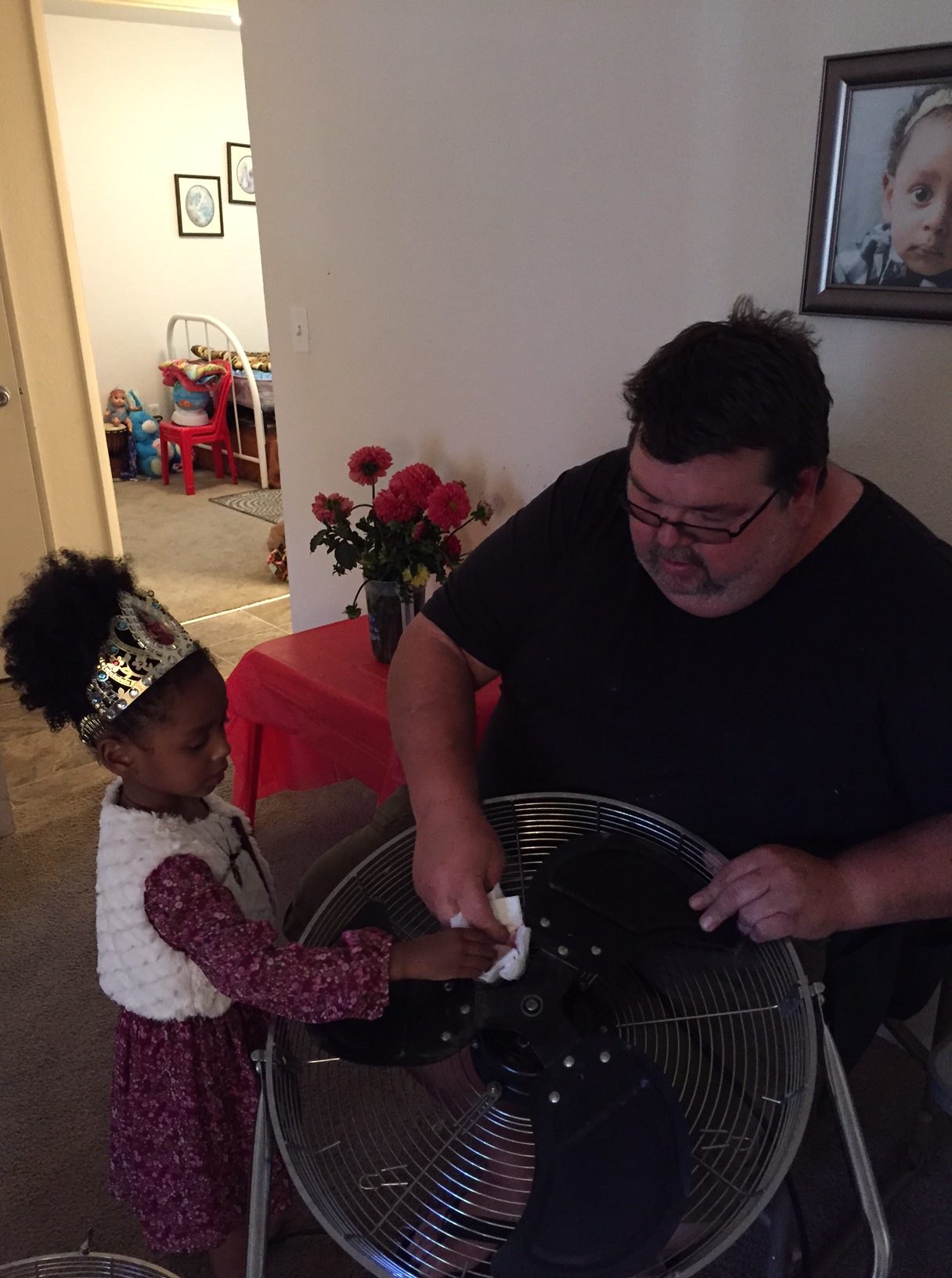 The day was hot, but the fan broke when someone’s balloons got caught up in it.  Hmmm.   Somehow strings mess up a fan.  Rob fixed it.  He had lots of help. 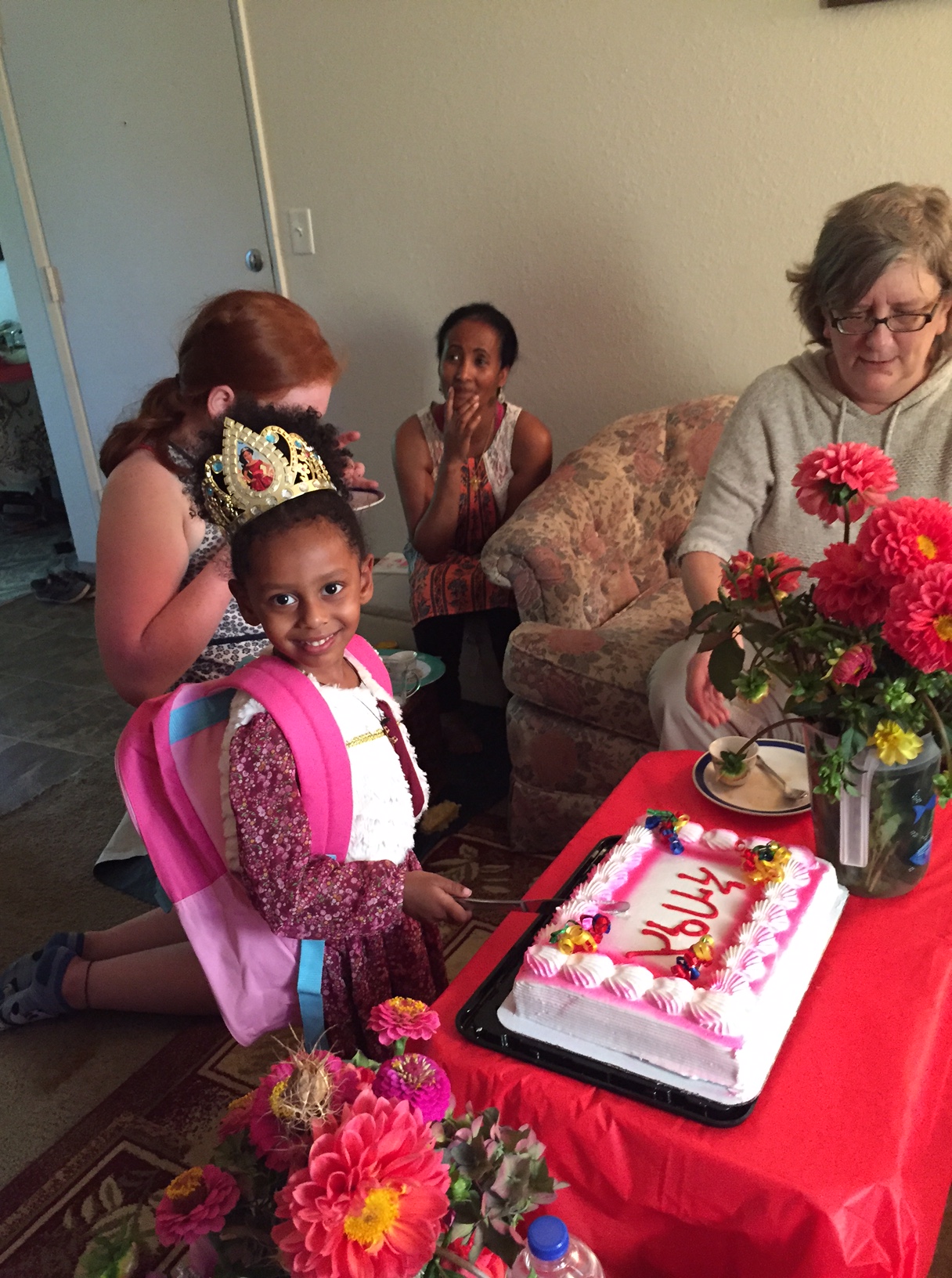 The cake says something like Congratulations in Tangrian.  The lady that brought it went to a lot of trouble to get this cake, and got the word off the internet and had it put on the cake.   This smart little cookie is getting fluent in speaking both languages, and is now ready to head off to preschool in a few days.   This amazes me when I cannot even remember how to say, much less spell the language they speak, much less speak anything but English.  We feasted on the African foods, along with the rice, veggies, fruits and salads others brought, and then ended up with the coffee made from beans roasted right there, ground, and made into a very strong, potent coffee heavily sugared and laced with milk, served in teeny, tiny cups.  There was a good turn-out for the party, and I know her mama was pleased with how it turned out. 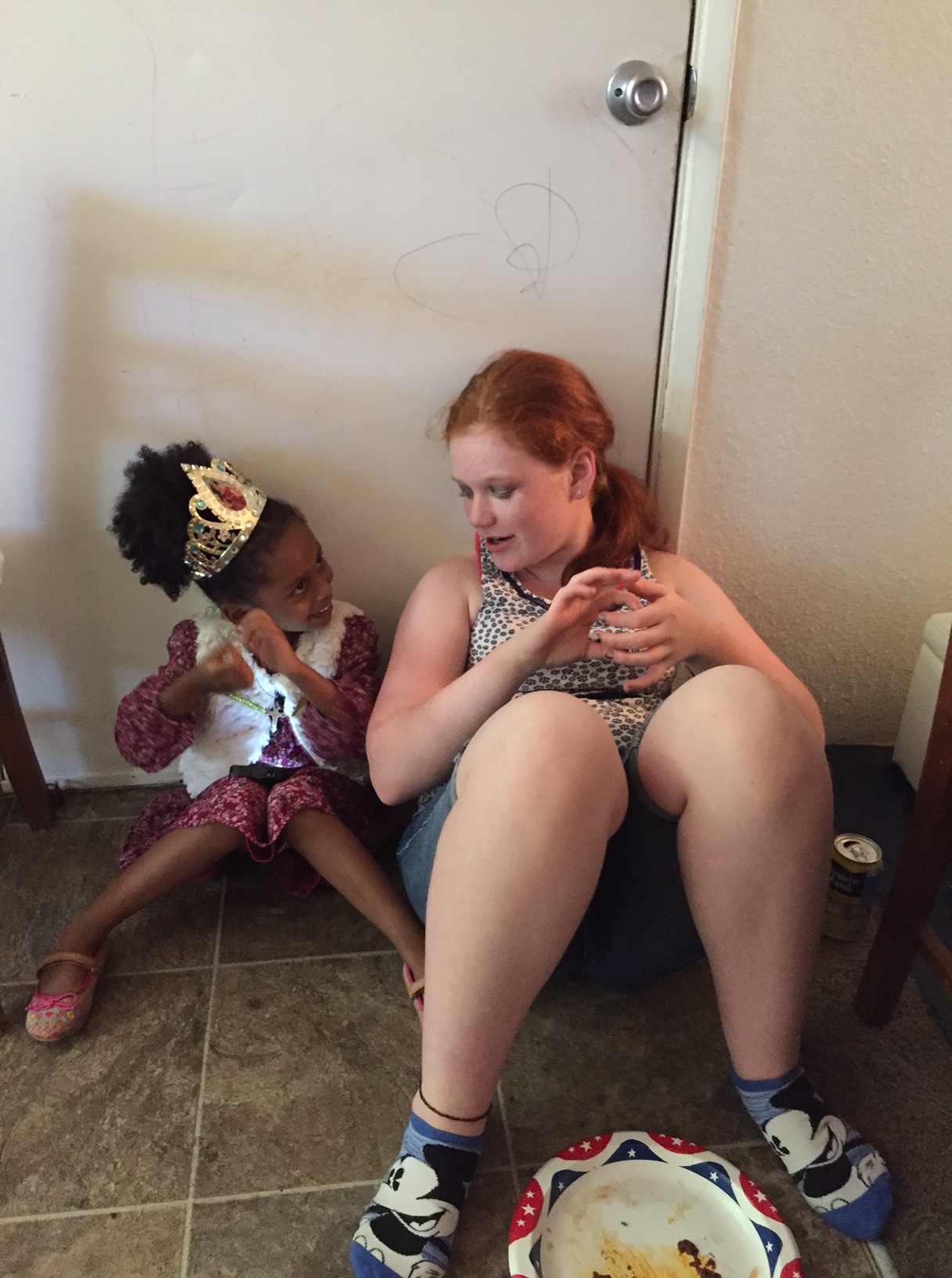 In the midst of it all, Patsy and Danait had plenty of time for the Itsy-Bitsy Spider to go up and down the water spout, several times.  I would bet that little lady slept well that night–I know I sure did! 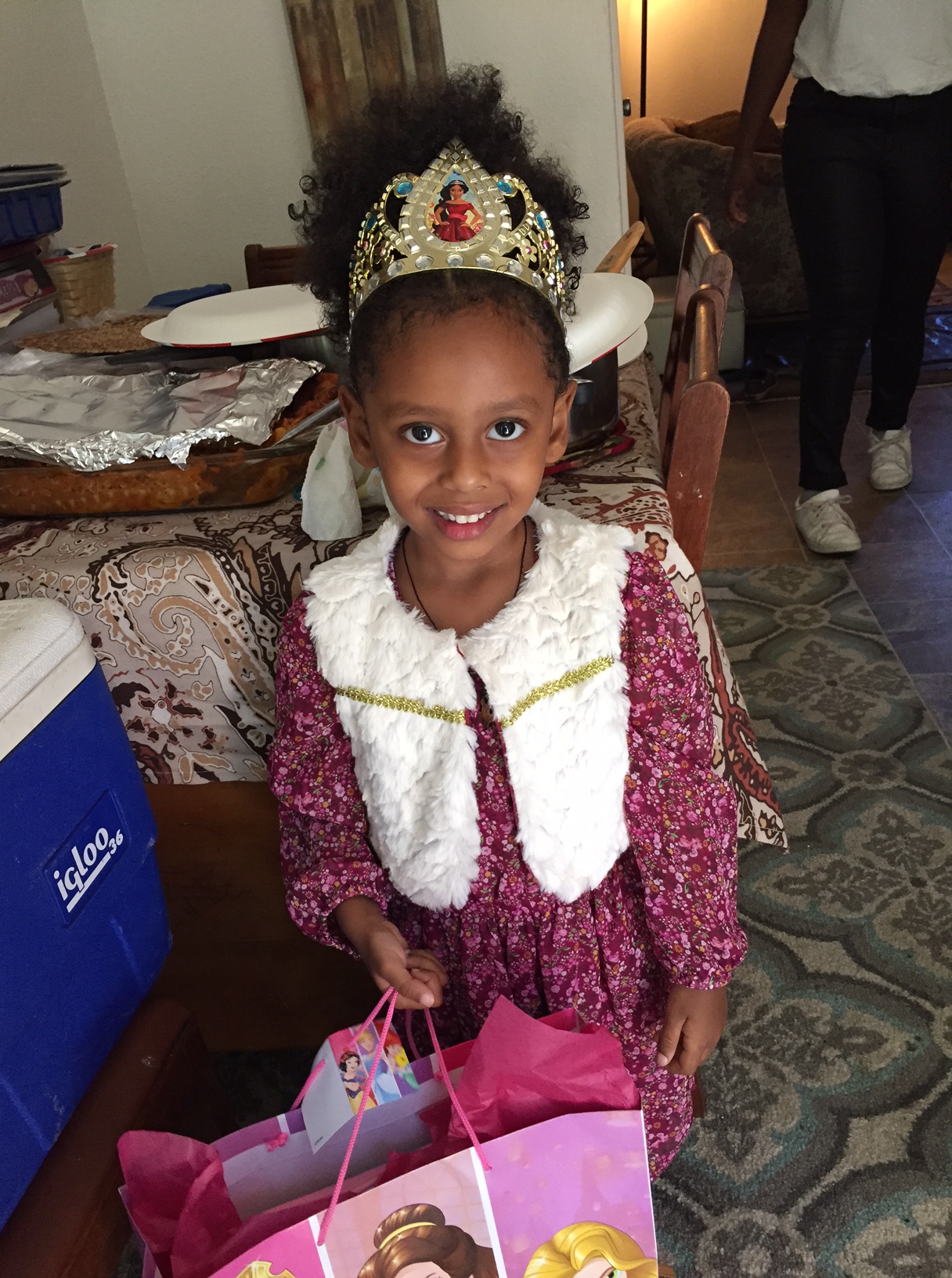 Our gift was a backpack for school.  I think she has very little idea of what preschool is, but is excited because her mama is excited.  She loved the backpack, and I know she will love school once she starts.