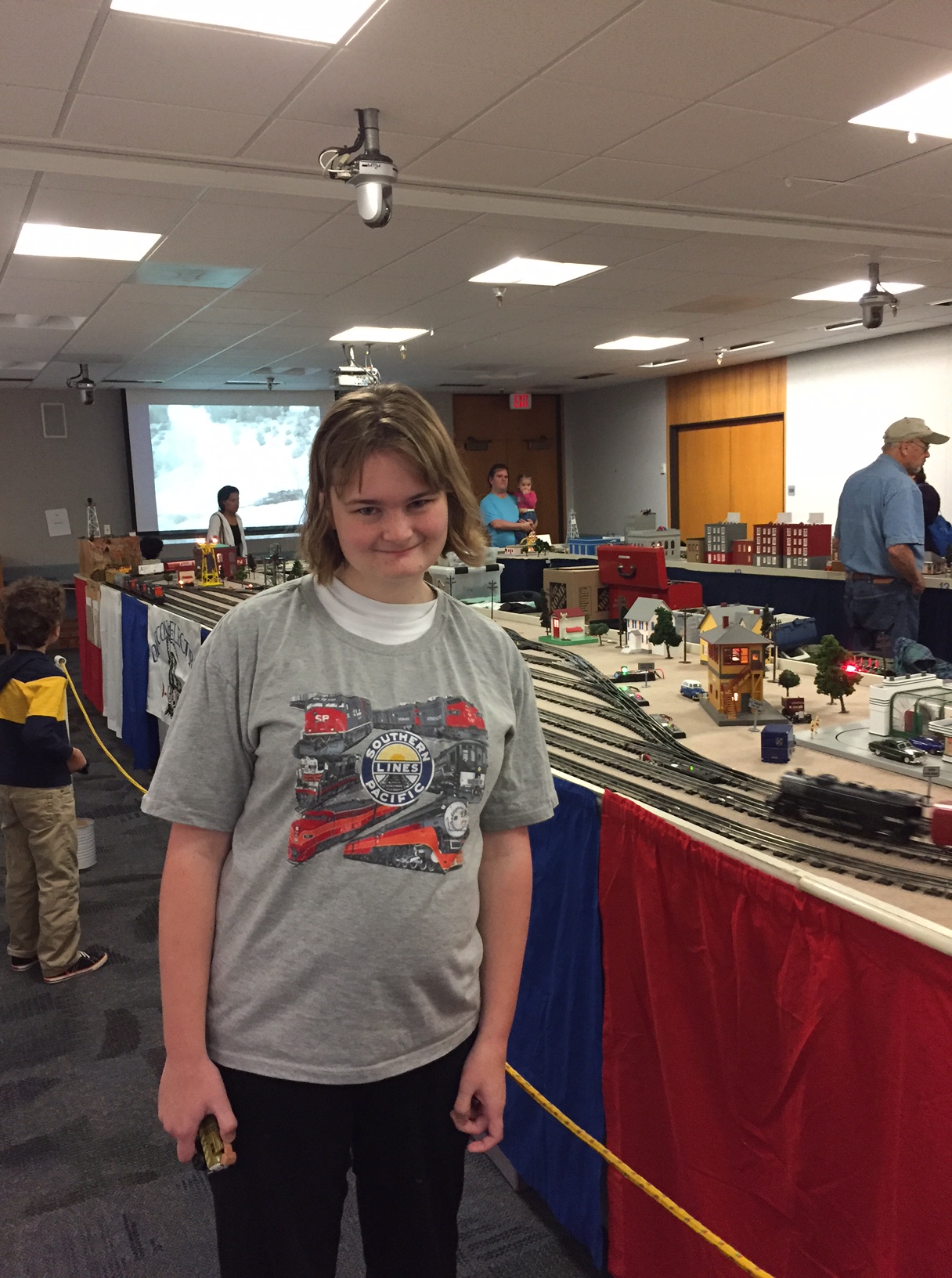 One of the highlights of this week was visiting the library, where a model train club had set up a large track and a couple of small ones for the viewing pleasure of anyone who came, all for free.  Michaela loves trains.  When she was little, she often would watch a video called “Trains Across America” that Rob got at a garage sale and has been very focused on trains for all of her life.  She had a blast! The retired gentlemen were very patient and eager to answer all of her many, many questions.  Some let her even carefully touch certain trains, and more than one of them was trying to work out a way that she could have her own set-up.  I simply said it was up to her parents:) 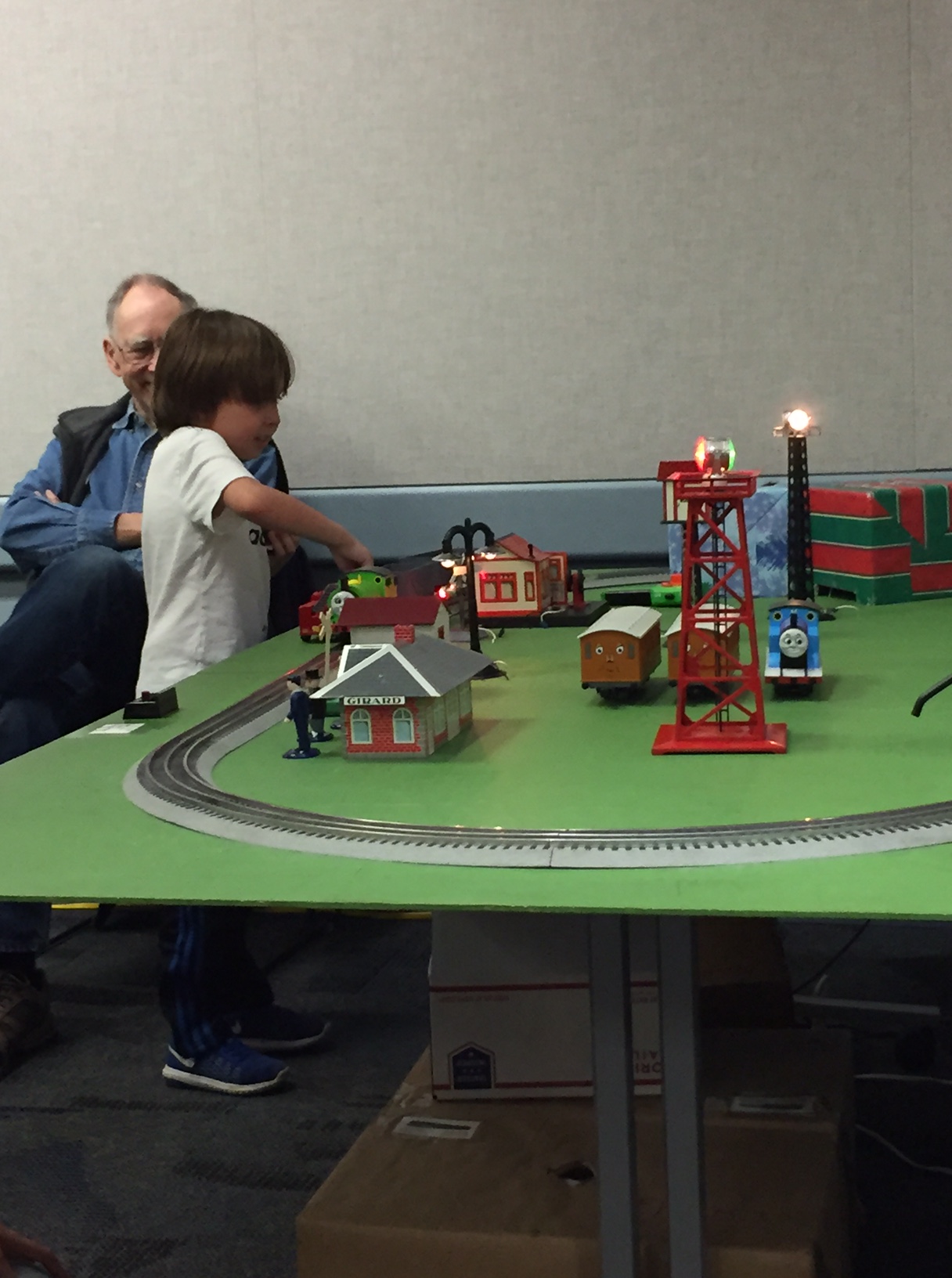 They set up a couple of smaller sets, too.  There were a few interactive train sets.  Jake and Michaela loved them! 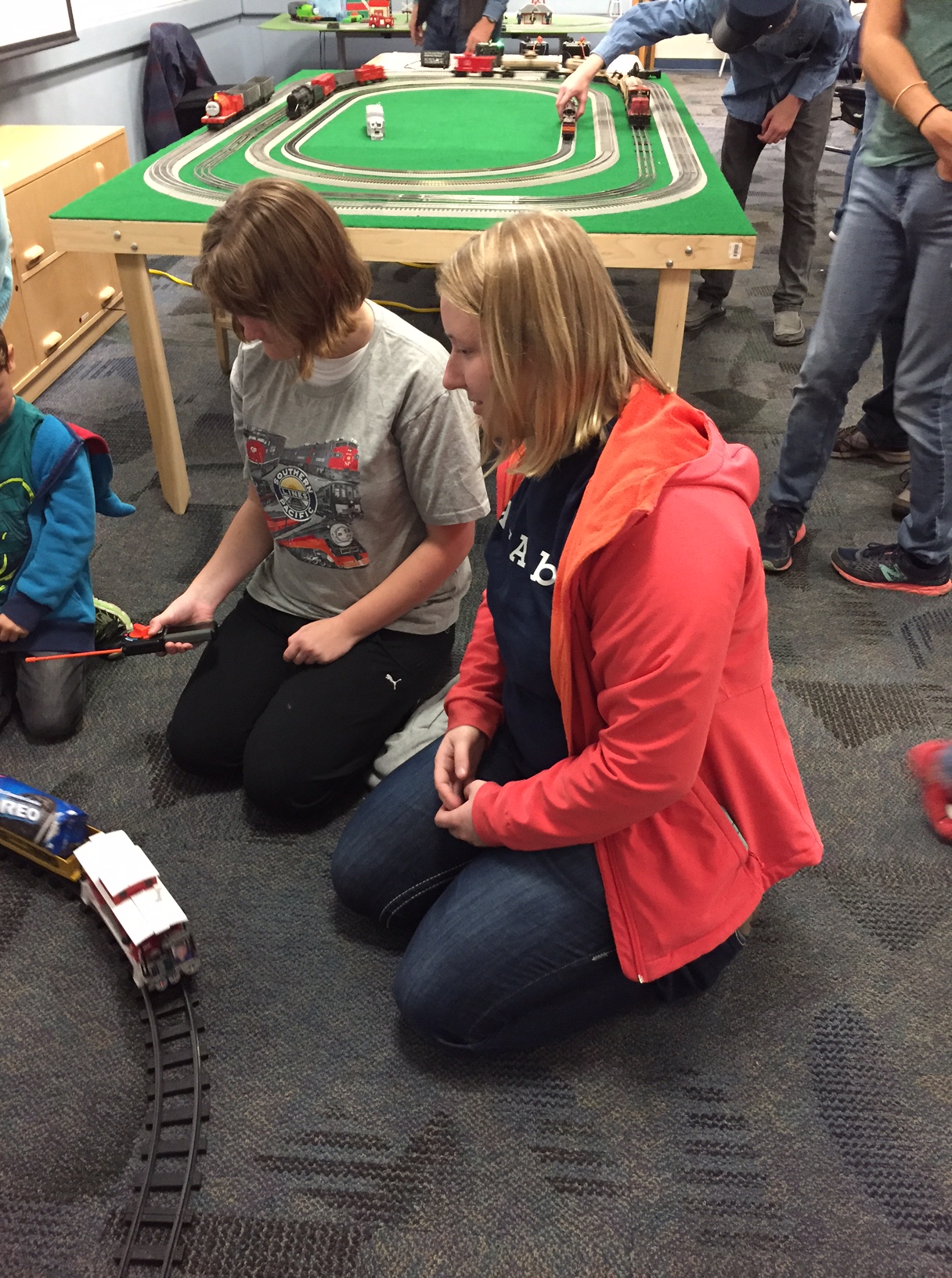 The kids’ big sister, Caitlyn, met Ja’Ana and I at the library and we all enjoyed the exhibit.    Jake and Michaela had to be pried away after almost 2 hours.  Caitlyn had already ran out and added money to her meter, and mine was running out, so we finally went back to my house.  I am not sure how long the kids could have stayed, maybe forever, but Caitlyn was going to take Michaela to her horse riding and so Jake hung at our house while they did that. 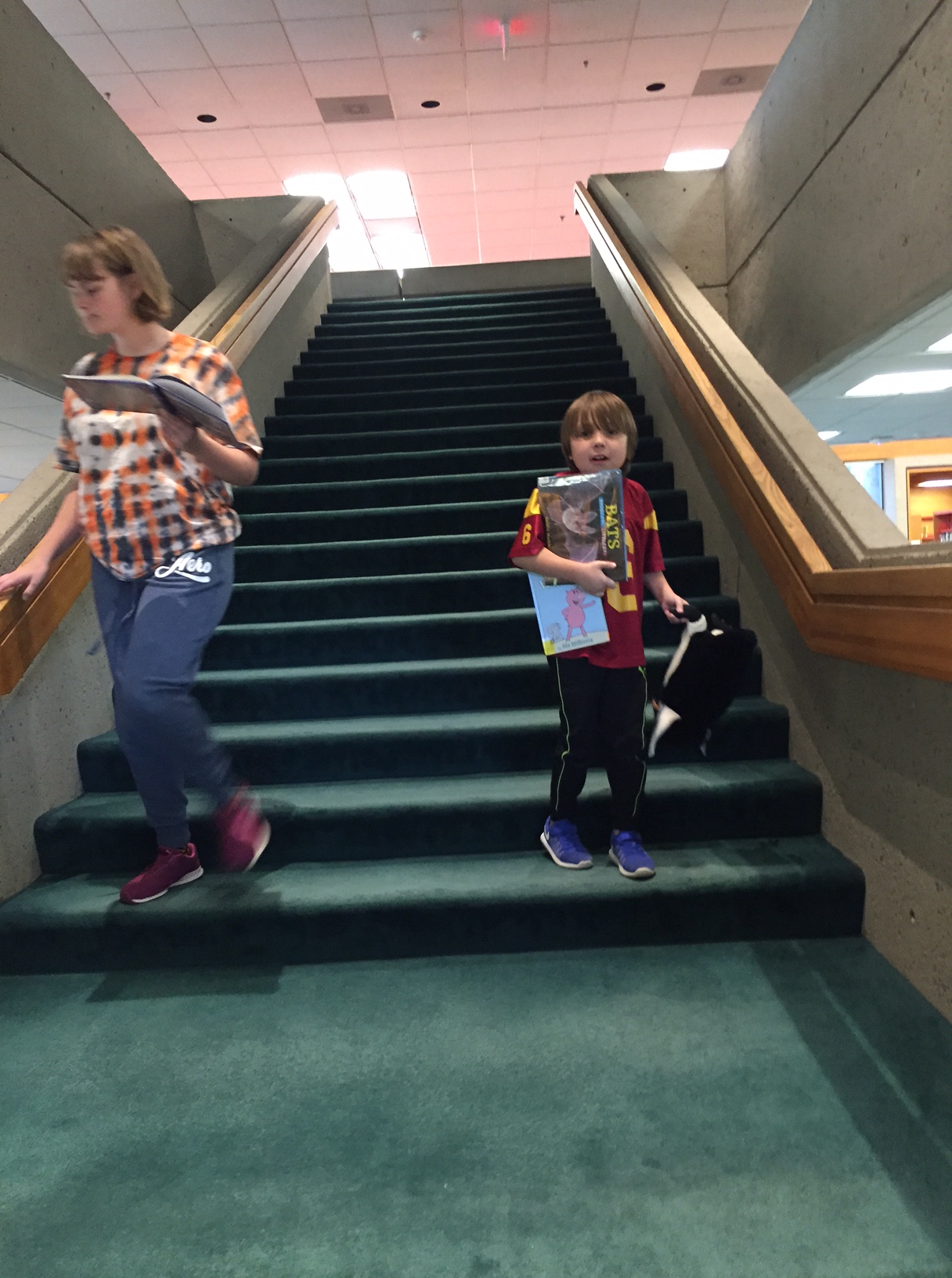 Another day, I took them to the library after school.  I keep their library books in my car, or at my house and they enjoy them when they are riding around or visiting me.  That way, they don’t get mixed up with books at their house.  Rob took Patsy to the library on a different night. 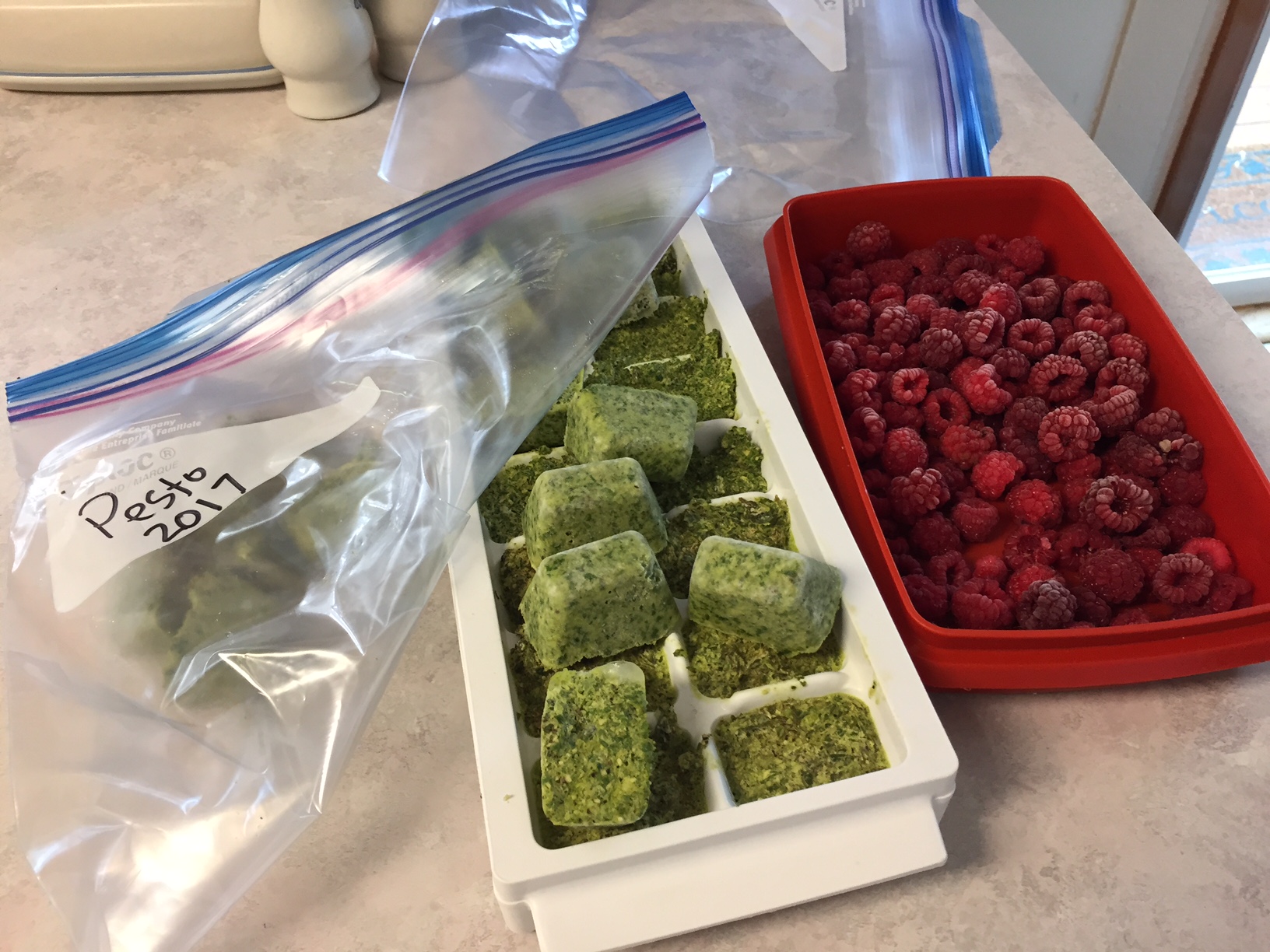 I picked and froze more raspberries this week.  I cut off most of my basil and turned it into a simple pesto.  Mine has basil, olive oil, salt, pepper, garlic and a small amount of Parmesan cheese.  I froze it in ice cube trays, popped the cubes out, and froze the cubes in a bag.  If the bushes grow more, I’ll make more, but this amount makes me very happy.  I use it in salad dressing and on pasta.  I also occasionally spread it on bread for sandwiches.  It’s nice on chicken, too, and is very economical since I don’t use any nuts in it, and only a small amount of cheese. 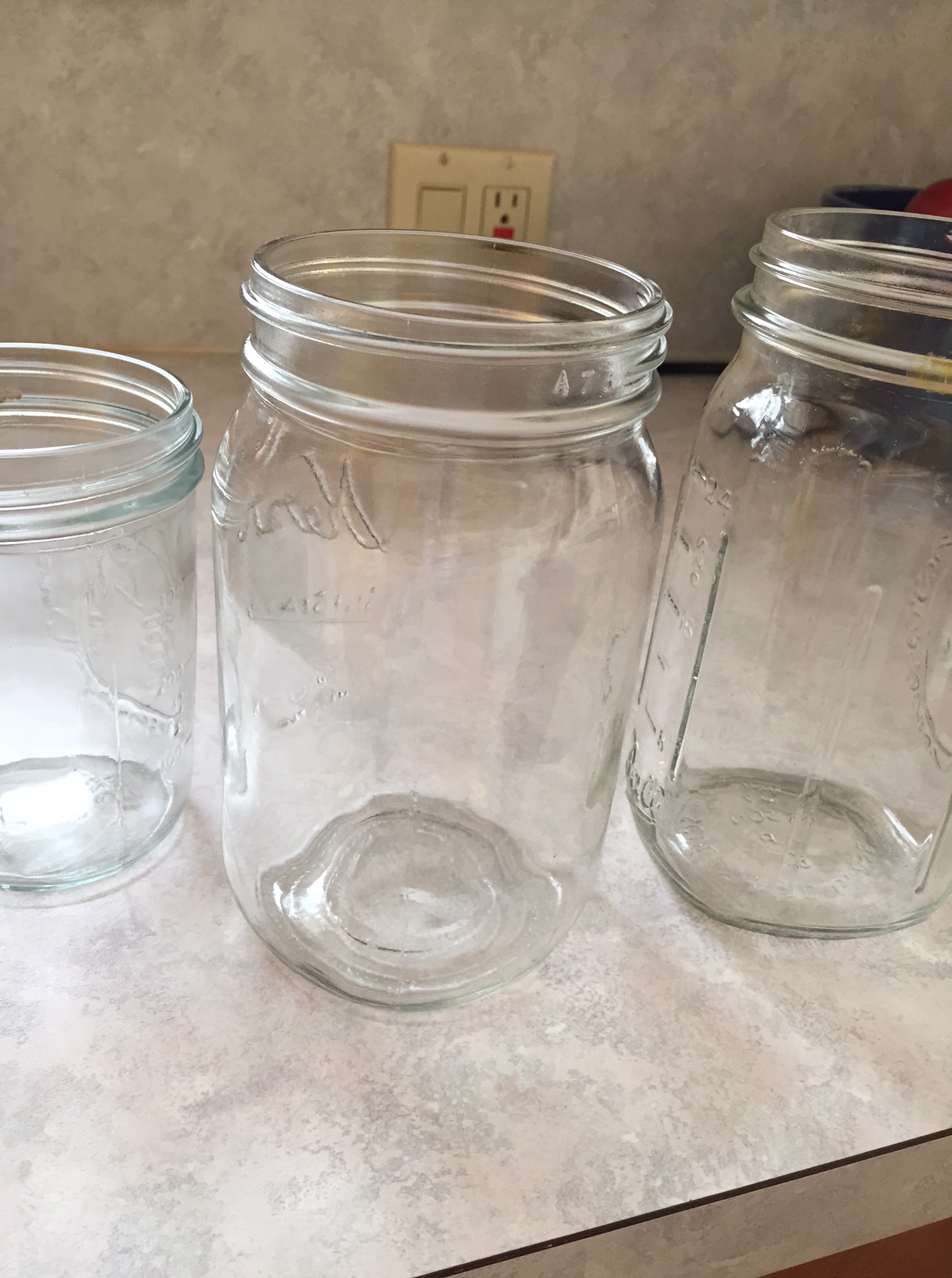 This week, we emptied quite a few jars of home-canned goodness.  It’s nice to start using what I worked so hard on.  I have been bringing a few jars of fruit at a time into the kitchen and chilling them in the fridge to make the fruit more tempting.  I also had some cottage cheese and it goes nicely with peaches or pears, so some got used that way, too.

I have not gone grocery shopping in October, yet.  One reason is that I stocked up so well in September that I haven’t needed anything, yet.  The other reason is that I caught a cold, and was not in the mood to shop.  Since I’ve budgeted $50/week, plus a small Costco run, I will now have $100 to spend this week.  What I generally do in a case like this (well stocked up, don’t really need much) is just keep the money in an envelope and wait until I see a basic ingredient that is on sale for a very good price (like butter for $2 or cheese for $5 for 2 lbs) and then stock up on a bunch of it.  That way I am always using ingredients I bought for the lowest possible price and my food is getting used and rotated.  I will also need a few things, like milk, in a few days.  Since I’m not the only one who doesn’t feel tip-top, no one is eating much, so things are holding out longer than usual and there’s always applesauce…..

Someone accidentally spilled something in the fridge, and I discovered it.  What I thought was going to be a quick wipe-up turned out to be a big fridge cleaning.  The silver lining is that I was able to get it organized and cleaned.  Now I know what’s in there and will use the odds and ends up, got rid of quite a few questionable items, and have no more odd odor and dried-on ??? on the bottom.   I was ruthless and did not even entertain the idea of keeping a few things that had been in there for a long time.  I finally made the lasagna I wanted to make, so that will be in there once it cools enough.  There is some rice and orange chicken from the other day, even though we ate it again last night.  So, one of my next jobs will be deciding on a couple more things to cook for the week ahead, since that will only take care of tonight and tomorrow.  Once I do cook them, there will be plenty of space in the fridge to put them!  That’s always a good feeling for me:)

Is there anything lurking in your fridge that needs to go?  Or any meals you want to put in there for the week ahead?