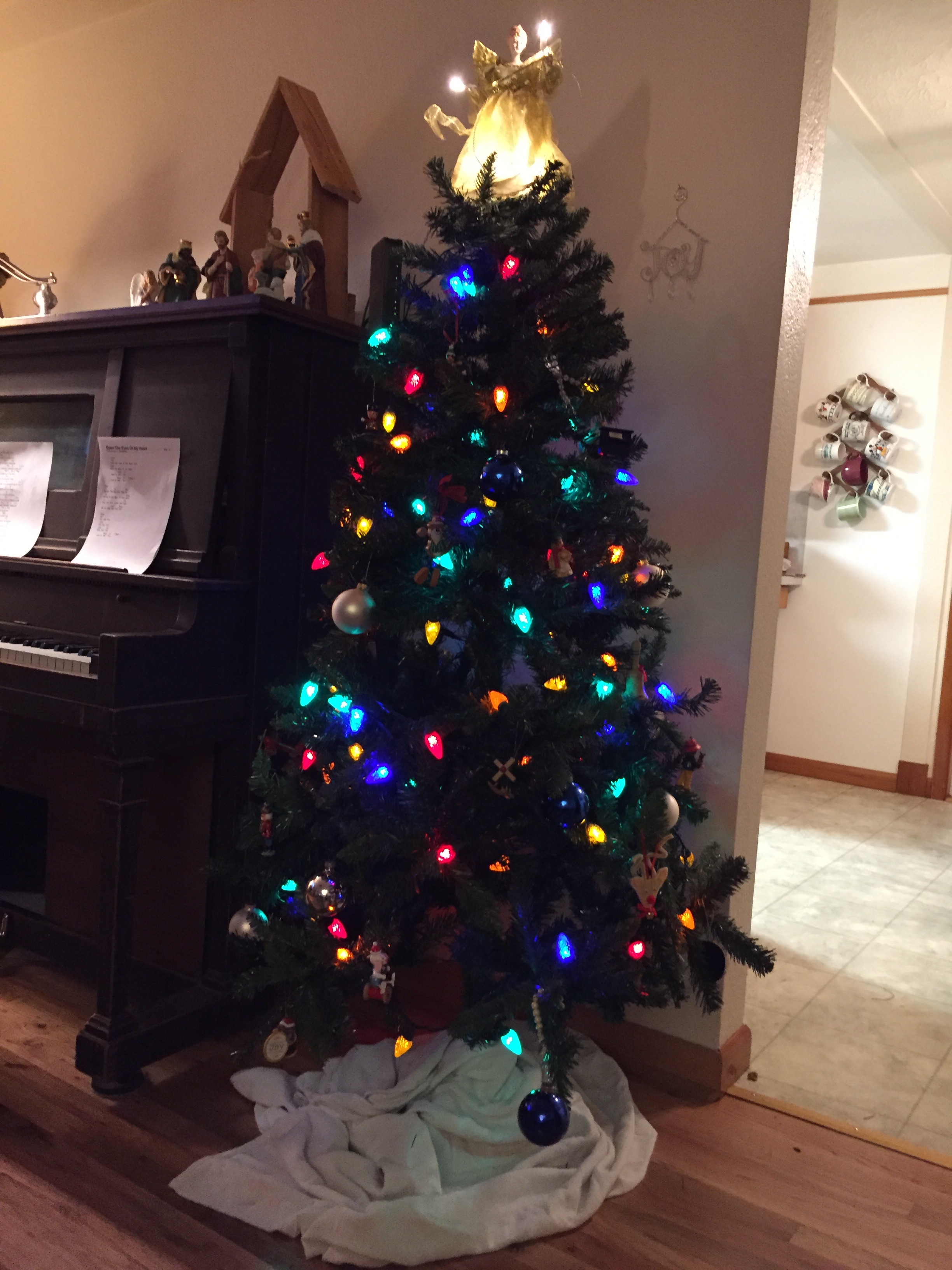 This has been quite a week.  I’ve had many, many appointments for the kids, Christmas decorations to put up, school, work and more!  We finally gave in and got pizza Saturday night, but otherwise, we’ve done pretty well at keeping it frugal during such a busy week.

I was delighted to accept this little artificial Christmas tree from my friend, Harnet. A friend who was moving gave it to her, but she already had one, and offered it to me.  I was especially glad to try it out, because last year I had to put a tree up in the garage, since the living room is so small.  I was not happy with that arrangement, and wanted something better this year.  I’ve never used an artificial one before, since I live in Oregon and am surrounded by inexpensive green, live trees, but thought I’d try it out.  It works great in the small space I have.  We are thinking about getting a fresh one and putting it outside on the deck, with only lights.  We will see how far we get on that idea.

Patsy and I went upstairs in the shop and only brought down the lights, ornaments and nativity we wanted to use.  Of course, I don’t need as many ornaments as usual, with a small tree and this will make clean-up easier. The only thing we bought so far was a poinsettia for the piano.  I even found some extra candles up there that I can use.  I put up a nativity scene, and found the advent wreath.  There are some stockings, but I may need to sew up a few more.  I did find some Christmas fabric in my stash the other day, so now I’m set, since I found the existing ones to use for a pattern.  Or….there’s always the dollar store if I run out of time:) 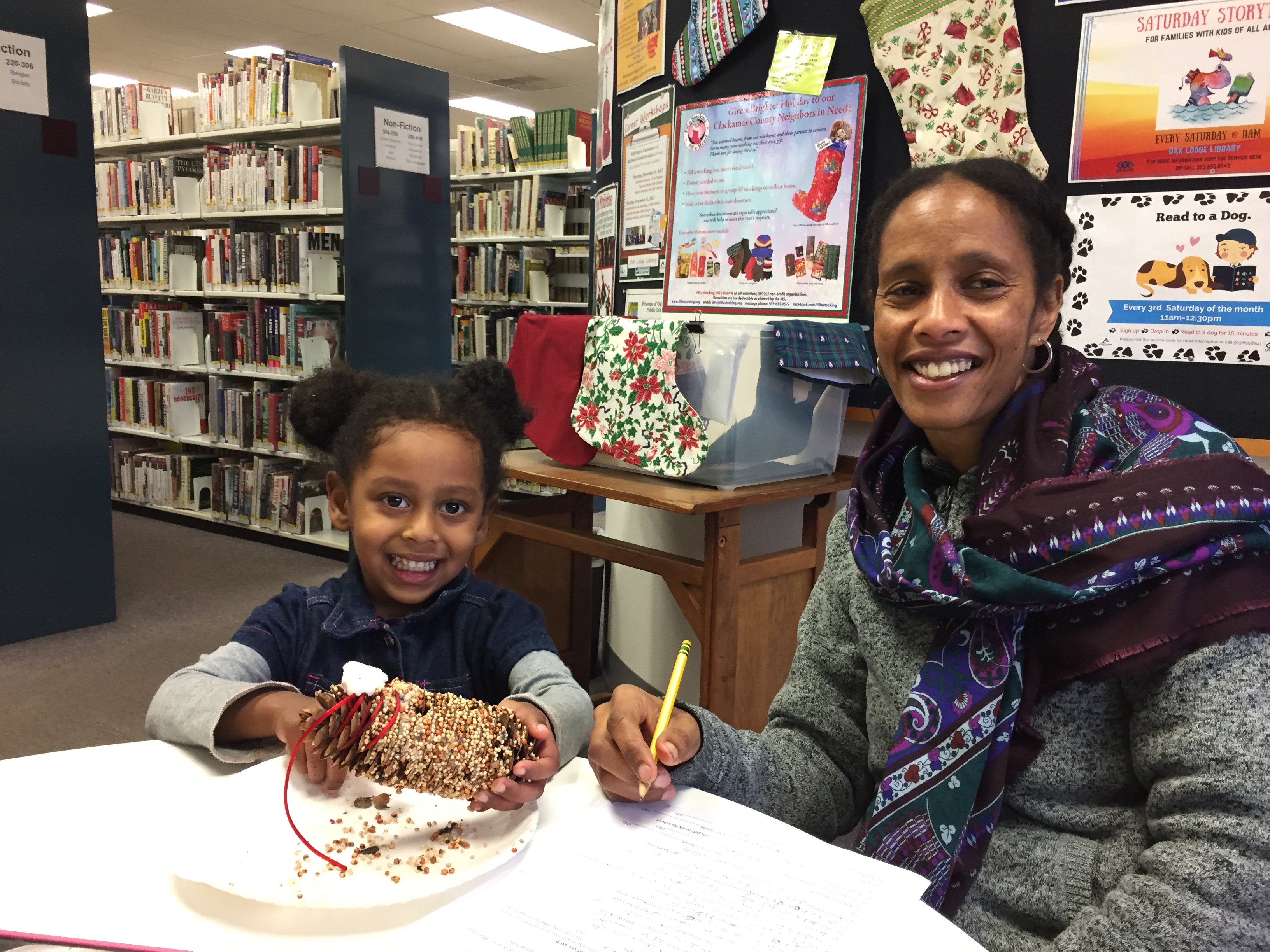 My sister, Rosalie, Ja’Ana and I had a day with Danait and Harnet.  One of the fun, free activities we did was take Danait to the library for a reading program/story time.  After story time, they did a craft where they rolled pine cones in suet and bird seed.  Rosalie helped her put it outside on her deck when we went back home.  I hope some birds come.  She was really excited and hoping they would.  Harnet wanted to study, so that’s what we did while they did story time.  She has tests coming up for school next week, and is a very diligent student.  We did over 2 hours of homework that day.

We got her Christmas tree up with lots of help from a very excited 3 year old.

Harnet wanted to learn how to make tacos, so, while we did more homework, Rosalie ran down and got some tortillas and things to add to what she already had, and I showed her how. We also showed her how easy it was to make quesadillas for Danait from just cheese and tortillas. She loves Mexican food, so was very excited to learn, and sent pictures of Danait happily munching soft tacos today!  Now, she has a couple more super easy meals, that they like, to make on busy days, and she knows just what to buy to make it taste the way she wants it.   I think we will have to show her about the bulk spice bins at Fred Meyers, since that is the spice Rosalie got.  It is clearly the most economical way to get spices, but a little daunting unless we show her exactly which one to get, since all she ever saw was a bulk plastic bag with a little tag–no label, of course.

As usual, she fed us another wonderful meal.  This time, it was  brown lentils made with beri- beri spice, and a stew of beef, potatoes, and a spicy sauce.  She had injera bread, and I took some brown rice to share, as I can’t eat the injera since it contains barley flour with the teff flour.  We always enjoy the sour cream she offers to us to cool it all down a bit and then we had coffee:)

It took me many, many hours (I’m slow when it comes to computers) but I finally figured out how to load the pictures and am now back to being able to take more, and post like I used to.  Because the hard drive was gone, there were a lot of programs to get up and running, and a lot of pictures to transfer from my phone, as they were all gone.  It’s even better, because now my phone transfers the photos automatically to the computer when I take them.  I just kept at it and did not have to beg or pay anyone else to fix it.  I’m saving those options for the next big problem:). Hopefully, my blogging will get back to normal this week! 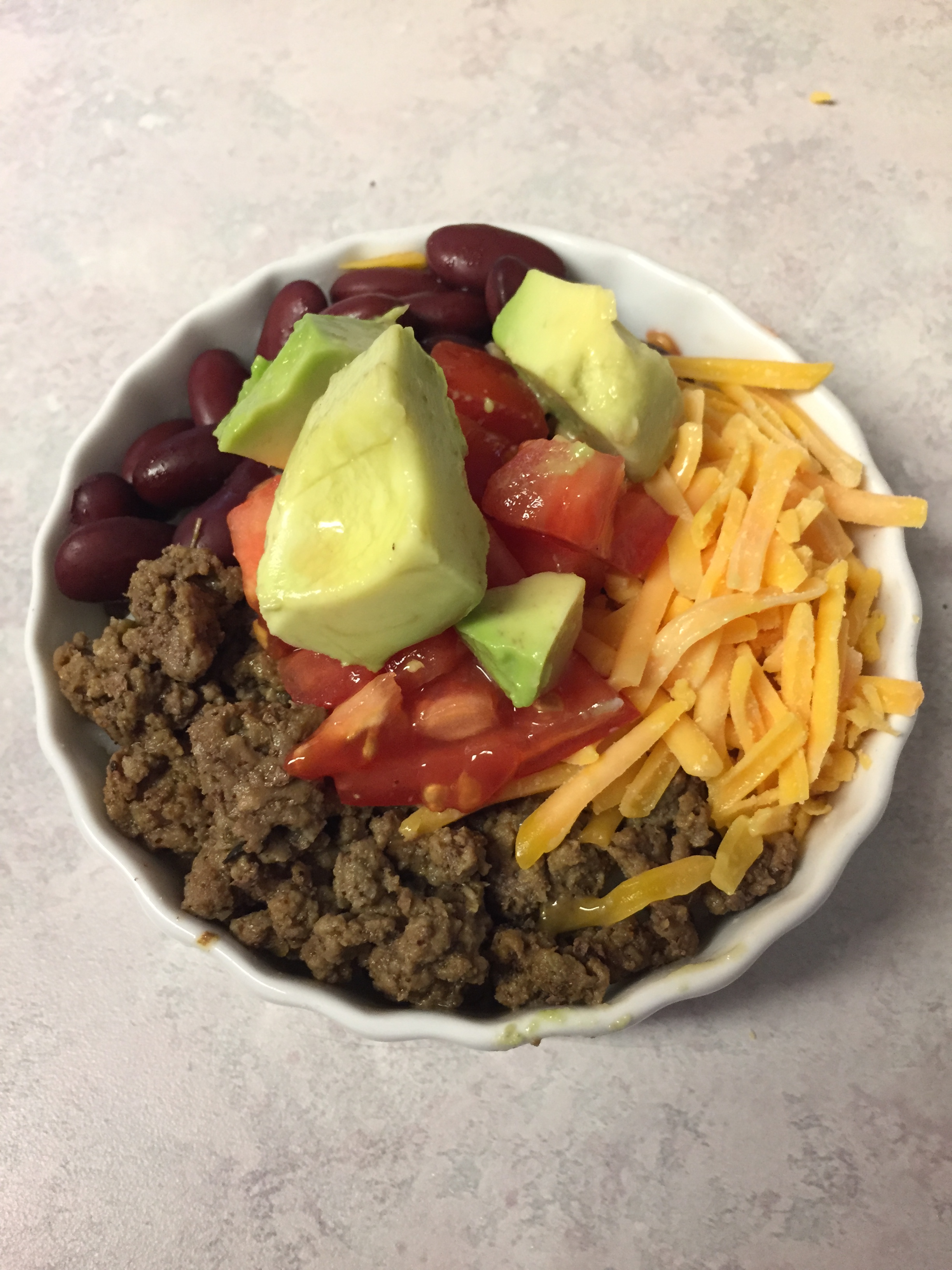 I put together these taco rice bowls from leftovers left through out the week.  It felt good to take the odds and ends and make something new.

I got some groceries at Grocery Outlet, as it had been about 10 days, and before Thanksgiving before I bought a bunch.  The tomatoes and avacados came from that trip, and were very reasonable.  They really made the leftovers tasty!  I just stocked up on basics–things like carrots and milk, yogurt, and whatever else I needed that was a good deal.  I got the shrimp I wanted for Christmas Eve fondue. At that store, things are usually quite reasonable, but you have to grab them when you see them, as you might never see them again!  The rest of my needed items came from Fred Meyers, as Grocery Outlet also may not even have some of the things on my list on any given day.   The best bargain we got was Rice Krispie treats for 50c/box of 8.  Rob got a case and took them to school.  We like to get things like that for the classroom where he works, as they use them constantly to reinforce good behavior.  We prefer home-made ones, but they are not allowed at school–store bought is what they want, so when we see a good deal, we grab it!

The week’s offerings included barbecued chicken a few times, tacos several times, salads, African food (Harnet always sends leftovers as well as feeds us), and crispy chicken strips.  We had rice and potatoes, along with frozen veggies as well.  And pizza.  Yum!

This next week is pretty busy, too.  It’s just that time of year.  But, I have a plan.  I want to make some chili and refried beans, for starters, and those favorites will help the week go easier.  I’ve got some beans soaking right now, and will put them in crock pots tonight, and deal with them in the morning. 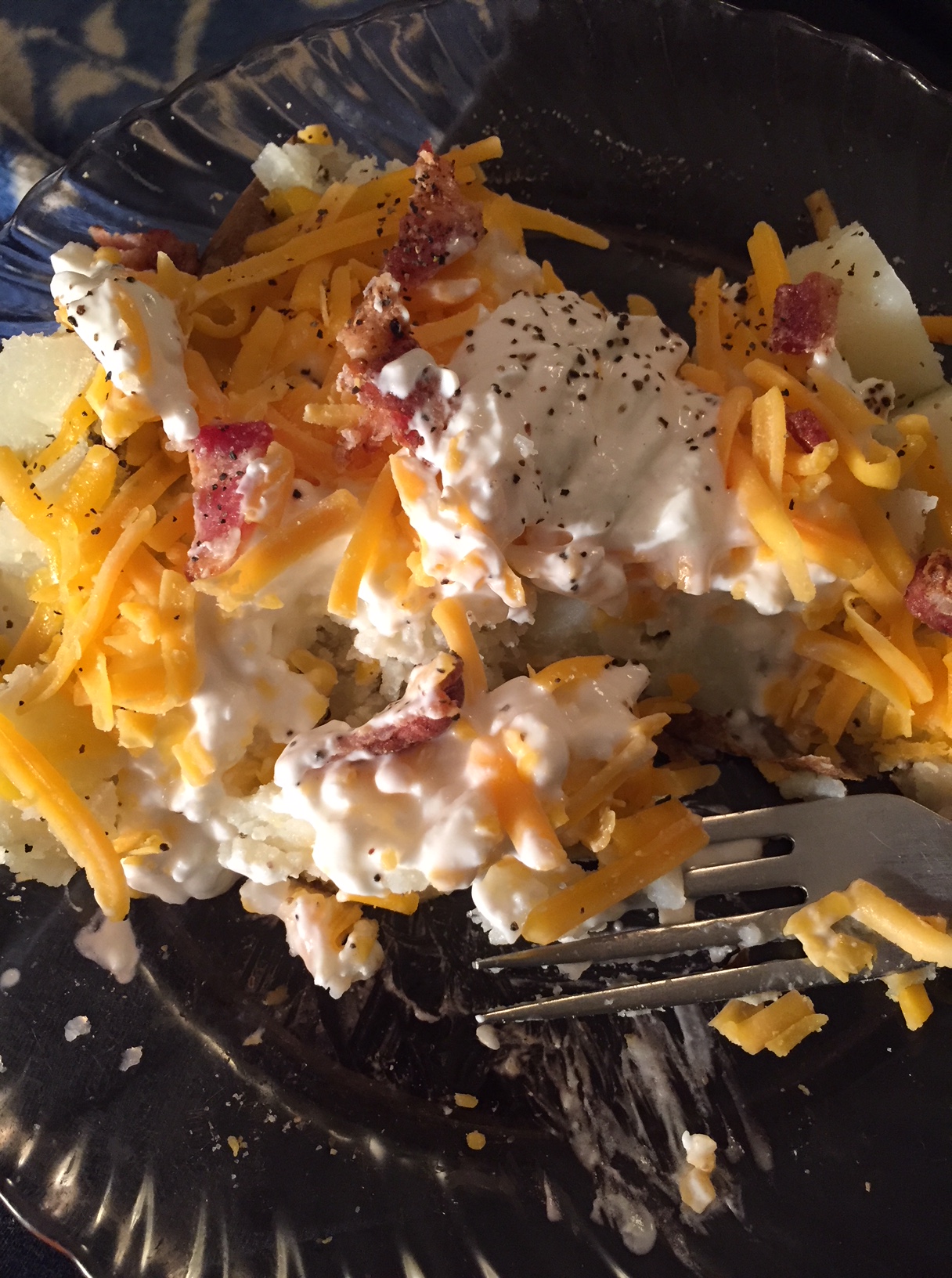 Of course, baked potato bar is always welcome around here!