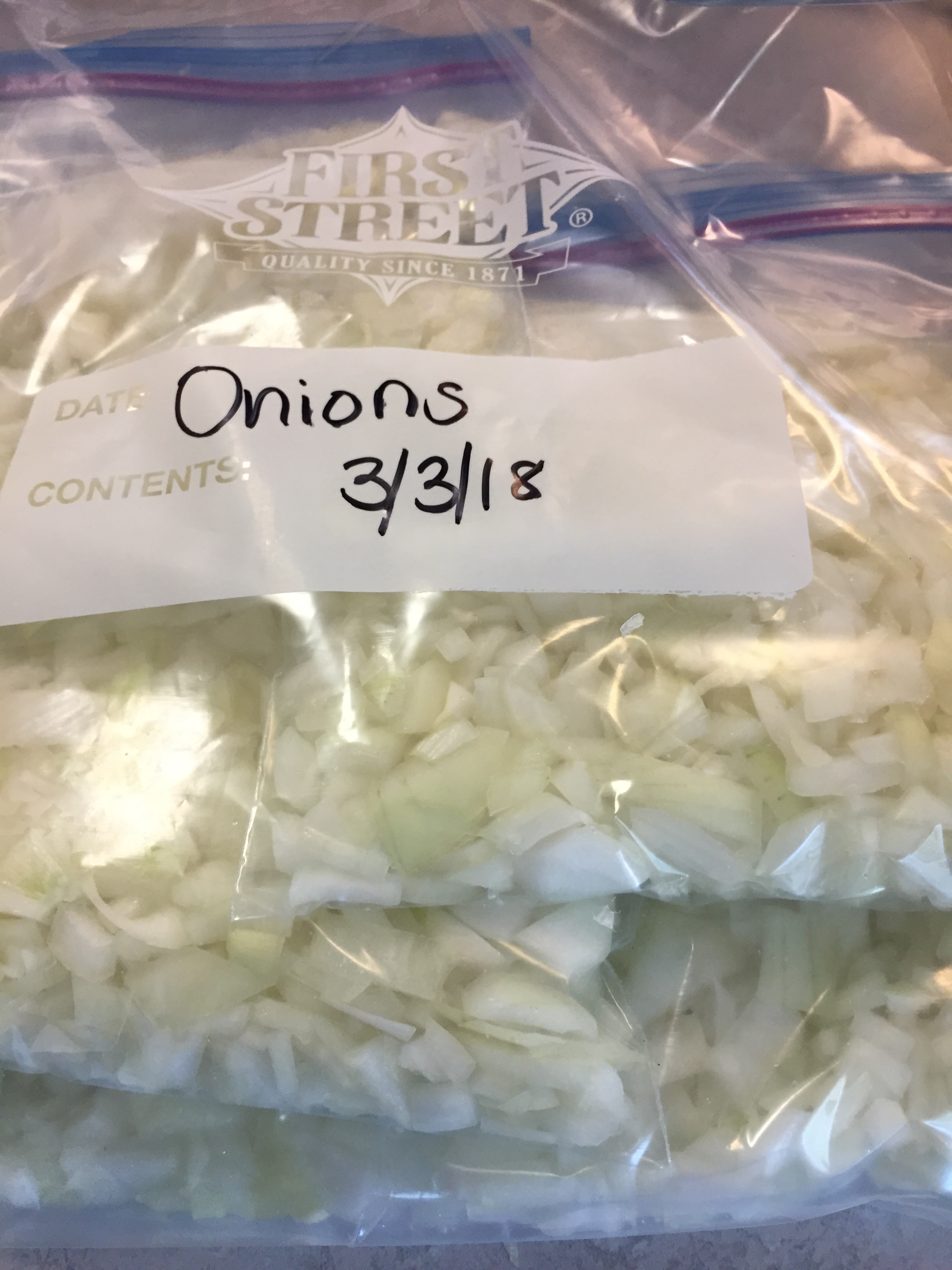 Today, we were able to add onions to our freezer, and to our bucket where we keep fresh onions.  The easiest way to preserve onions is to dry them and keep them in a cool, dry place, so that’s what we do.  I was down to 3 onions from the 25 lbs Rob picked up a few months ago, so I was delighted when he, again, brought home the….onions!

We were shopping after church for some food we needed for the week ahead, and he went out to put the groceries in the car while I redeemed some Safeway Monopoly coupons.  (Amazingly, we actually won $5!!!). A total stranger approached him in the parking lot and confided that he had bought a huge bag of onions, and had already taken out the ones he wanted.  Some were going soft, he said, but there were lots of good ones.  Did Rob want them?  You bet!  He happily accepted them.  There had to be 15 pounds or more still left in that bag!

Later, once home, he sorted them.  All of the best ones, he put in the bucket we keep onions in.  We store them in the garage, where it is much cooler than the rest of the house.  Even so, at this time of year, they want to sprout and grow, so I have to keep an eye on them.

A few he threw directly into the garden, where he will till them in for compost when it dries out because they were over the hill.

There was a sizable pile left that were starting to “go.”  He peeled them, and trimmed away all the soft/brown/bad spots.  He then chopped all the good parts and pieces into small chunks and we put them in quart-sized ziplock bags.  We did not over-fill the bags so each bag ended up as a flat, thin layer, and we laid all the bags out flat inside of a super large bag.  There are 5 or 6 small bags in the big one.  We did this so that they won’t get lost in the freezer and so that a piece of the desired size can be easily broken off of the frozen chunk for quick meal prep.  Then they were popped into the chest freezer in the shop, and they will freeze flat.

I will use the fresh ones as much as possible, and then freeze more of those if they start going bad quickly.  When I’m in a hurry, or run out of fresh ones, I now have frozen ones to use in a pinch.  What a totally unexpected blessing!  I mean…we don’t even know the man that gave Rob the onions.   I’m amazed at how God is providing for us this month.  We are very thankful!

14 thoughts on “A Gift of Onions to Preserve”