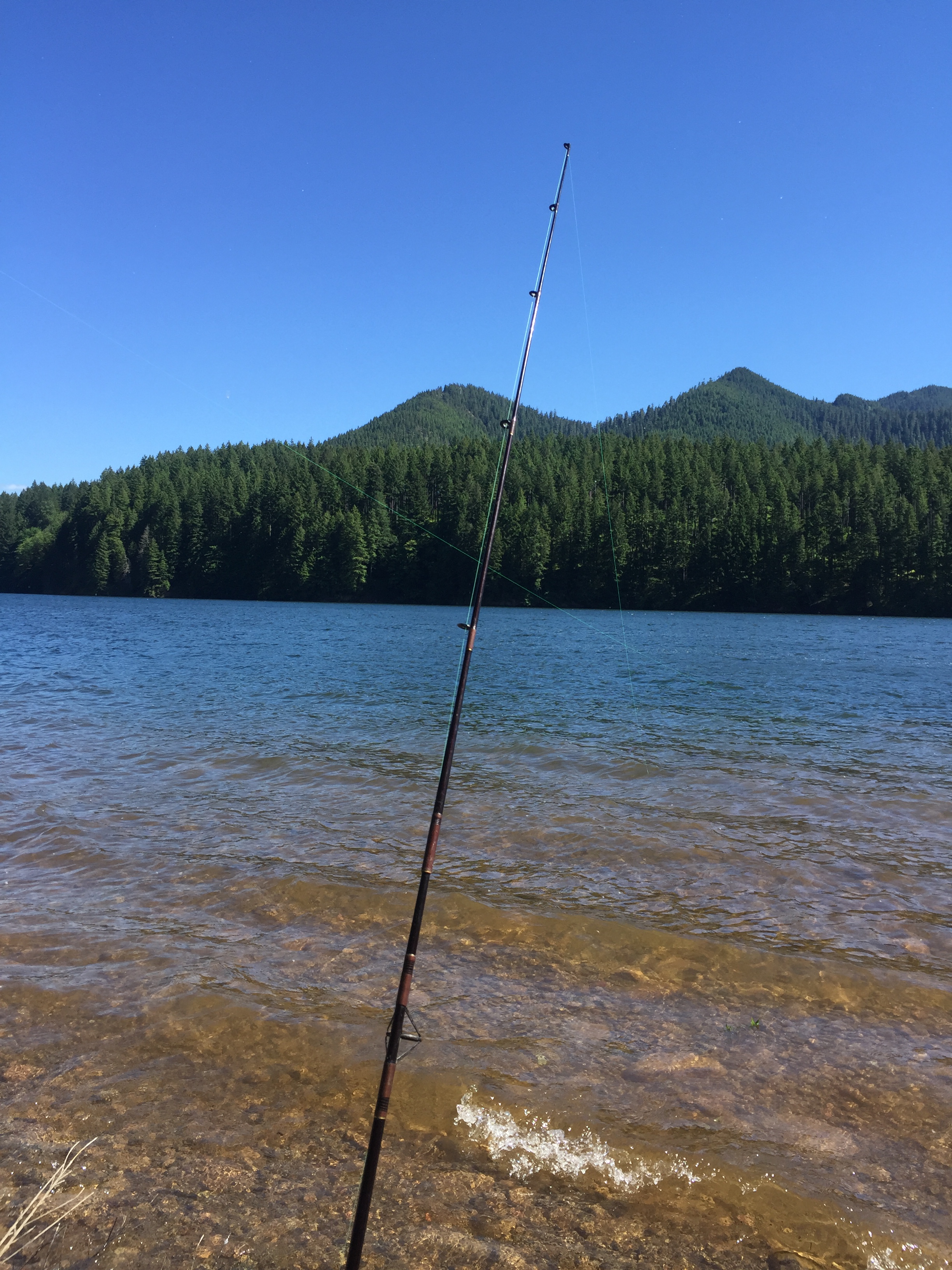 The city of Salem, where I live, gets its water from Detroit Lake.  It flows down the watershed, and is treated, then used by the city, and a few other surrounding cities. On Tuesday, we received word that the water has a low level of toxins in it from an algae bloom in Detroit Lake.  It is the same lake we were fishing at on Monday.  The very same lake we let the kids wade in, and many people were swimming, water skiing, and boating in.  Yikes!!!  (We are all fine so far, by the way–we didn’t ingest any and the kids only dipped their toes in.  Thank goodness they didn’t lick their toes!)

Thankfully, the warning to not drink the water applies to children under 6, medically fragile people, and so forth.  Still, although my body size is quite a bit larger than an infant’s, or even a preschooler, so I’m fine, it’s a bit creepy to think that I’ve been drinking toxic water for a few days.  Even just slightly toxic water.

On Tuesday, I finally got around to doing some grocery shopping.  We were out of a few things, like milk, and I had 2 coupons to still redeem from the Safeway monopoly game, and Tuesday was the last day I could do that.  So, Patsy and I meandered through Safeway, buying groceries and killing time while Ja’Ana was at her first college-age Tuesday night meeting at church.  (Unbelievable, huh?  College-age???  My baby??? She was the youngest kid we ever adopted, just 21 months when we got her, which is why she will always be my baby in my mind)

I went down the water aisle to get a gallon of distilled water for my iron.  They were almost out.  I even said to myself that it must have been because there was hot weather this weekend, and people were thirsty, but I wondered.

There were cases of water for $1.99.  I always like to keep a few on hand, and that is a good price, so I sent Patsy to pick up a couple and put them in the cart.  The pallet was rapidly decreasing.  In fact, she told me there were ladies who were snatching and grabbing for the water.  Huh?  For water?

At the checkout stand, I finally got what was going on, as I overheard the cashier talking, explaining that extra water was being sent by the truckload that night.  I perked up my ears, and began to listen better, and then realized that people were buying water like crazy.  I quickly paid for my groceries, including my 2 cases of water and gallon, and headed for the car.

On the way home, I stopped for gas.  Because I paid with a $20 bill instead of a card, I had to go inside.  There was a long line.  Everyone had bottles of water.  Some people had their arms full of bottles of water.  Of all those people, I was the only one who just wanted to pay for gas.

I’ve read since about price gouging–up to $47 for a case of water.  (Rob did point out that when you buy one bottle at a time for $2.50 or even $3 when you are on vacation, it comes out to more than that per case, but I still think that is excessive).   I’ve read about mothers who could not afford to buy water for their children.  I’ve seen articles about thousands upon thousands of bottles of water handed out to people, restaurants closing down, and ice machines turned off.  I’ve seen pictures of bare, empty shelves.  Thank goodness, the following picture is my idea of being “low on water.” 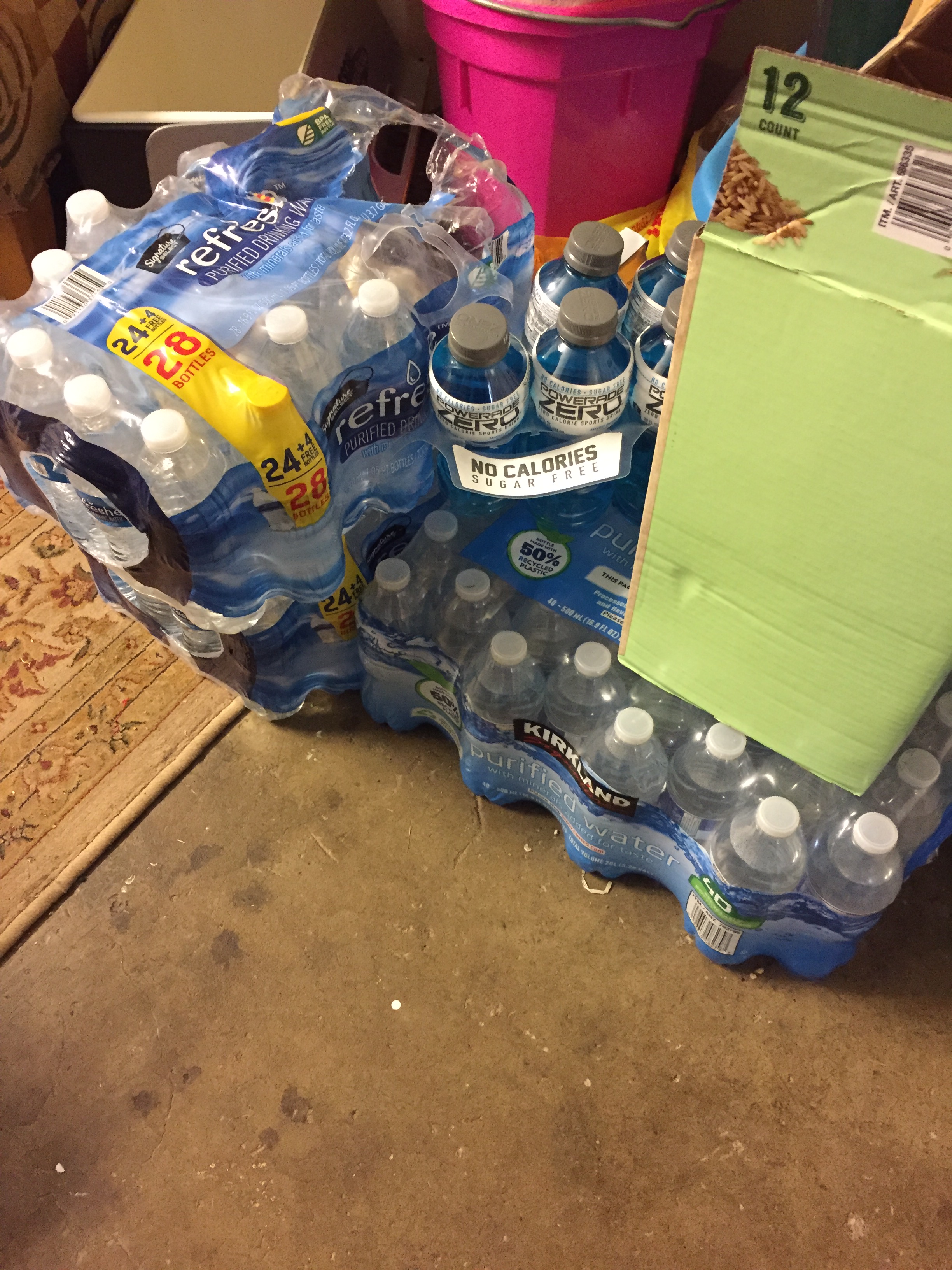 This all happened on Tuesday.  Today, Friday, we are still under the same restrictions–don’t drink the water if you are under 6, pregnant, medically fragile, and so on.  When I stopped in at Safeway to get some grocery items, and a Starbucks card for a gift, the Starbucks was closed.  You could barely get down the aisles because there was so much water stacked up in them.  Although Rob knows of someone who watched an entire semi truck being sold in less than 2 hours on Tuesday, clearly, there has been a large supply brought in.

Have I bought more?  Certainly.  Am I drinking tap water.  No way. I don’t want even a little poison in my water:)  I made our ice with bottled water.  We picked up a couple more cases at Costco last night, and I got 3 gallons today. I’m letting the kids and my niece have what they want.   I expect this to be over before long, but if this crisis continues, I will take those 3 gallons or other containers to my sister’s and fill them.  Their water is not affected by this crisis.

It just brought it to my mind that you never know when some kind of crisis is going to come your way.  I’m glad I have a large food storage.  I’m glad it looks like a little grocery store in my garage, and that water was a part of what I stored.  I didn’t have to panic.  I didn’t have to snatch water from someone else. I didn’t have to juggle water bottles in my arms in the gas station store, and pay large sums for each bottle.  My kids didn’t have to drink water that was even a little toxic and neither did I.  I’m glad there is a well in our back yard that is hooked to our sprinkler system.  If worst came to worst, we would drink that, although I’d feel better if we got it tested first. (Wells are not affected by this current crisis, but we’ve never tested that well for drinking, since we are on city water and only use it for irrigation).

There have been some times when I asked myself if I was crazy for storing so much food. While I admit freely that I am trying to keep it reigned in a little more in the past few years, simply because there are less of us eating here than there used to be, I still keep a large stockpile.  There is more in the shop, mostly the main home-canning shelves and the deep freezers.  I wondered if there really was going to be a crisis of any sort, but figured at the least, I was saving money by buying in bulk and when things are on a really good sale.  I do sort and rotate the food. I throw very little away.  I store what we eat, and not random items.

Thankfully, this crisis is short-lived, and will not cause a panic at my house.  I no longer feel even the slightest bit crazy for having several cases of water on hand.  And, if for any reason there is a food shortage…..you can all come over for dinner:). Unless, of course, you get busy and store some food and water as well.  It’s not a bad idea.