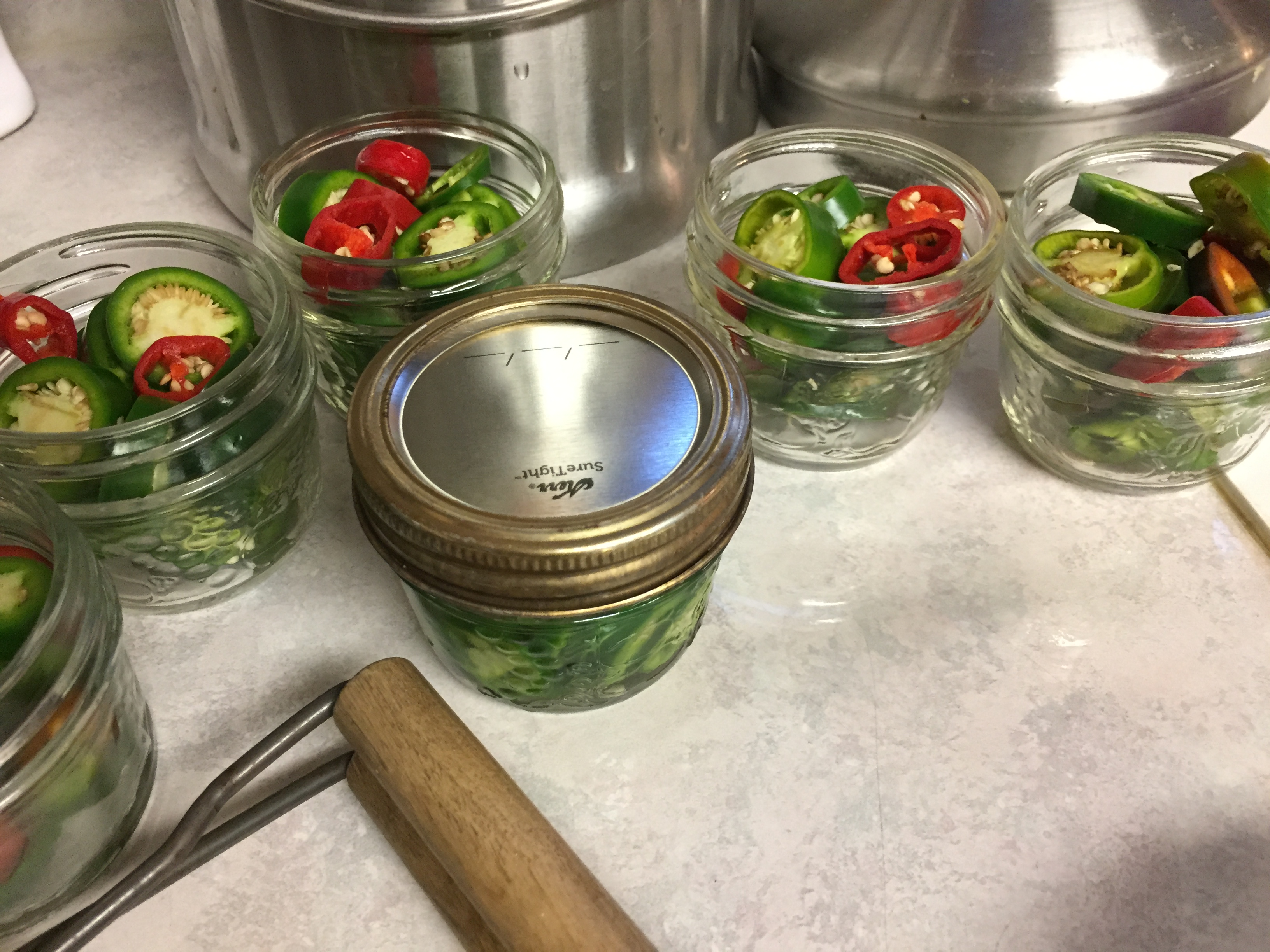 Every few years, I can just a few jars of pickled jalapeño peppers.  I have some teeny, tiny jars I use for this purpose.  Today, I went up to my sister’s house and picked her jalapeño peppers, since the pathetic crop I got has mostly been used when I made salsa the other day.  Last time, the directions were simple.  Put peppers in jars.  Cover with vinegar.  Can.  The recipe I found this year was a little more complicated, as in mix vinegar, water and salt, pour over, can for 10 minutes in a hot water bath canner.  It still was mostly vinegar.  When I use them, it doesn’t seem to matter that they’ve been canned in vinegar.  I just fish out the peppers and add them to whatever I want to spice up.

I only use them for a few things, so these 8 jars will easily be enough for the year.  In the past, I have added one small jar to a large pot of chili that needed a little zip.  Another time, I’ve used them to heat up salsa if I was making a small batch.  Another thing I do is to add one small jar to a large pot of beans when I’m making refried beans, especially if I’m out of peppers I have frozen or in a big hurry.  There have been a few other things that escape me that I’ve done with them.

I’m happy and thankful that my sister shared, as this was the year I ran out after not doing it for a year or two.  Some years, the jalapeños are so loaded.  Not this year for either one of us.  It was great to get a few to spice up our winter! 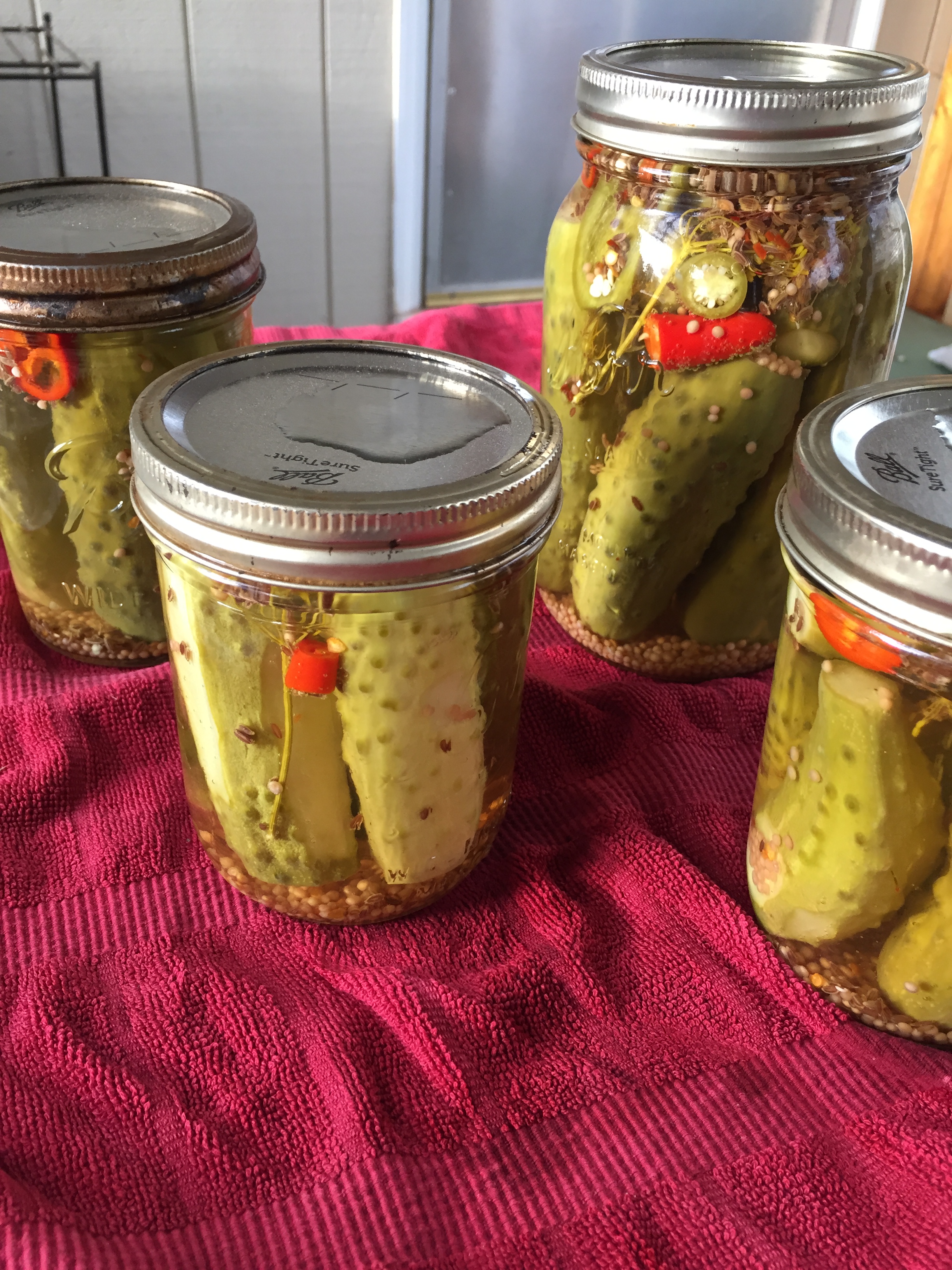 I added both Serranos and Jalepenos to the pickles I made this morning, along with some red pepper flakes.  They ought to be spicy and zippy!  This batch has the most peppers in it than any I have made so far.  Every time I think those cucumbers are done, they give me a few more.

The beans also surprised me by giving me quite a few yellow and green beans.  They were supposed to be done, but I didn’t get the vines pulled, and they re-bloomed, and the rest is history.  I froze them tonight.

Tomorrow, we have several doctor’s appointments.  Before and after those, I have some tomatoes I need to deal with.  My sister sent a bunch home, and I have those I picked a couple of days ago.  I’m still not where I want to be with tomatoes, so I’m delighted to have them.  I don’t think I’ll grow the San Marzano Gigantic-a again, though.  They are late to ripen, and are cracking and molding easily with this little bit of rain we have had. Maybe they will taste so good it will be worth it, but I’m not sure.  I’ll decide next winter:). In the meanwhile, there are those, some Willamettes and some Glaciers still chugging along, and I’m getting a bowlful every few days.  When I add contributions from my aunt and sister, I think I’ll soon be where I want to be.  When you think that there are 52 weeks in a year, and I use tomatoes at least once a week in cooking, often more if you count salsa and other products I make, well, you see what is motivating me to keep scrounging them up!

8 thoughts on “Pickled Peppers in the Pantry Are Not a Necessity–But I Canned Some Anyway!”