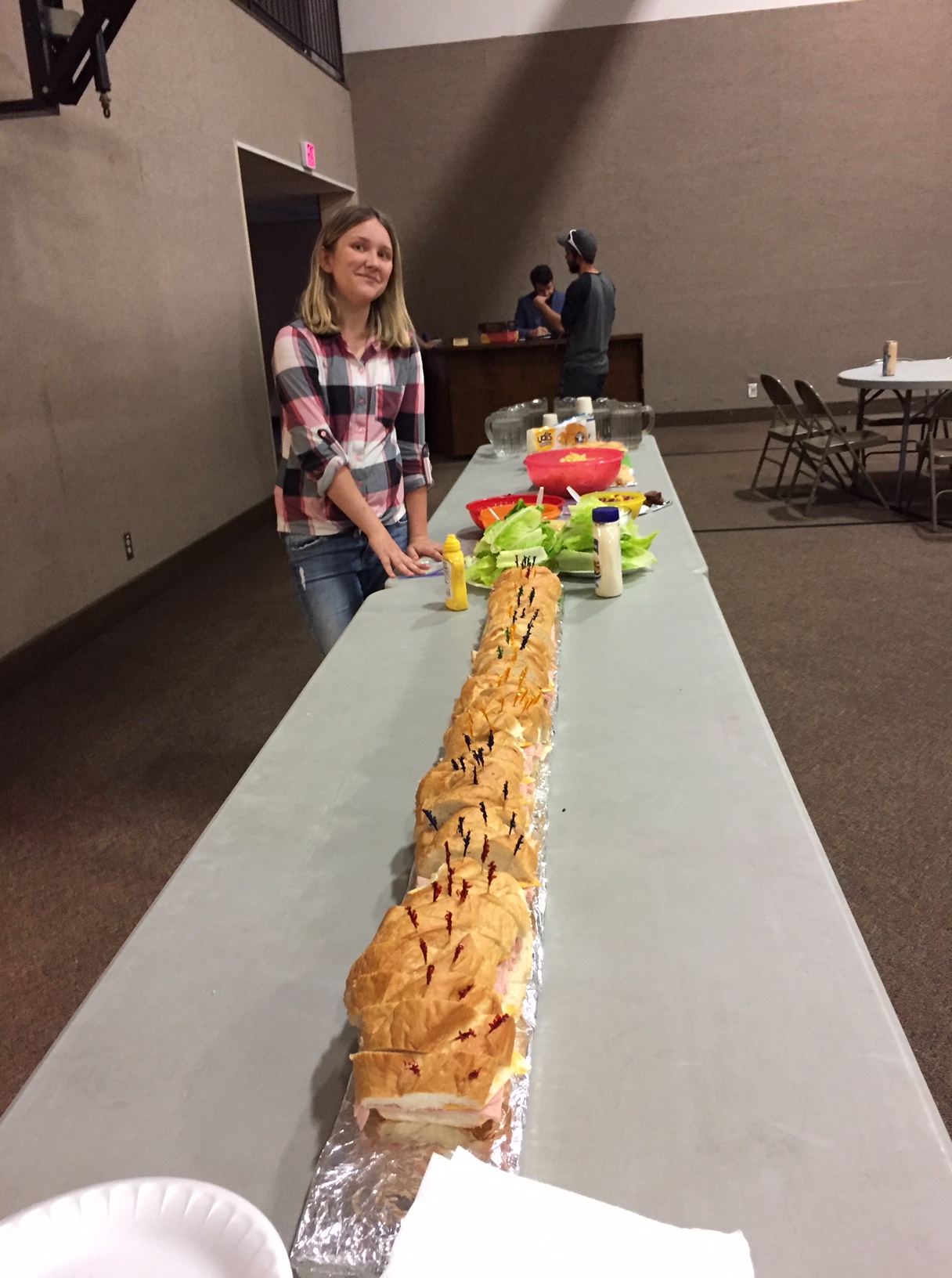 It was our turn to feed the college-aged kids at church this week.  We made a giant sub sandwich, using a board Rob covered with foil.  We used 5 loaves of French bread, which were purchased for 88c/loaf at Winco.  We also found ham lunchmeat for $3.50 for 2 pounds!  We got 8 pounds and piled it on, along with a thin layer of cheese slices, put fancy toothpicks in it, cut it and lined up the pieces to look like one long sandwich. 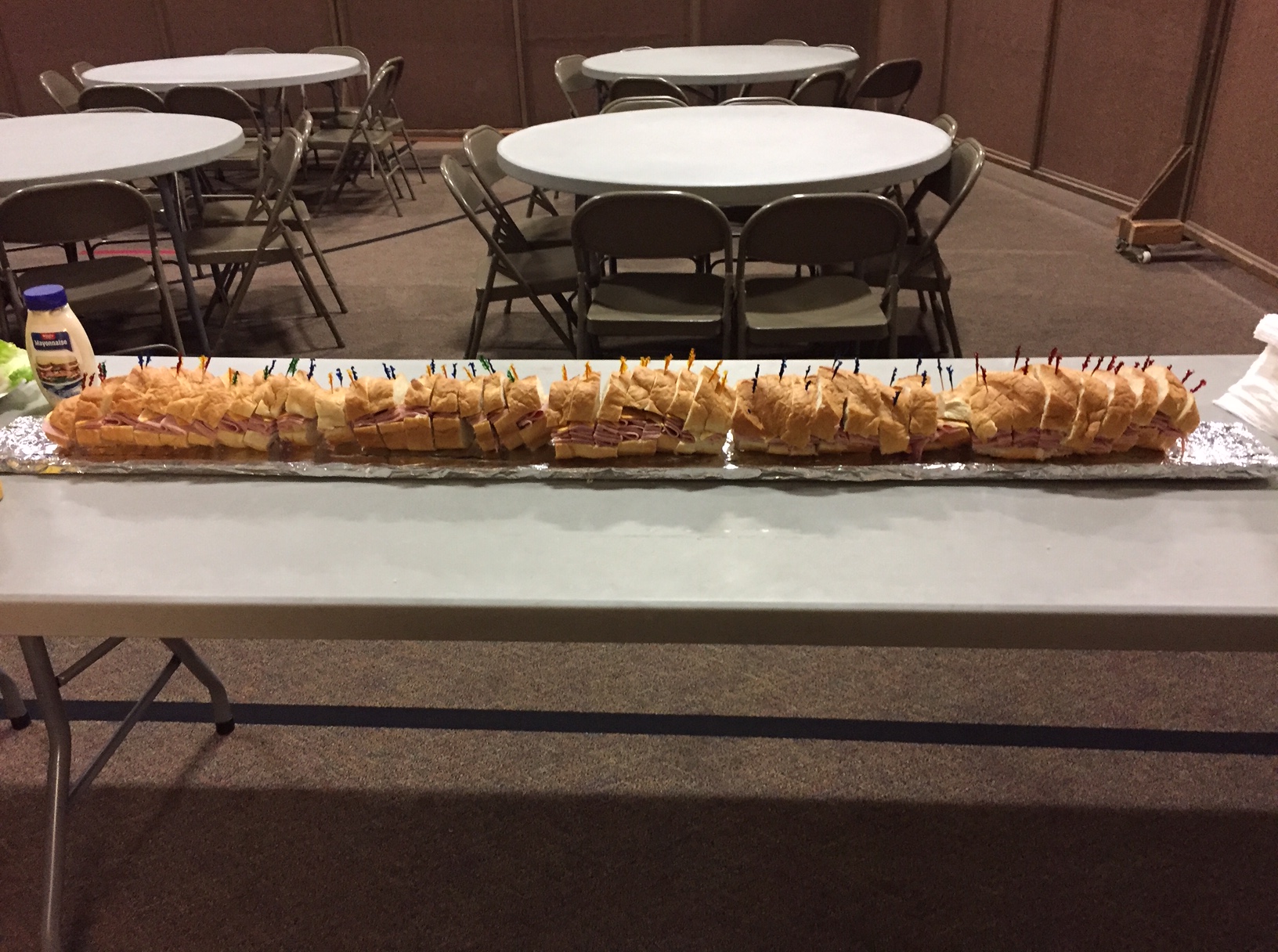 We served chips, brownies, veggies and toppings for the kids to put on their sandwiches such as tomatoes, lettuce, olives, onions, etc.  There was a gluten-free option on the other end, using Udi’s French bread and Krispie Treats.  This meal was very well received.  Alissa and Patsy helped me the night of the event, as Rob ended up staying home.  We came in way below the budget and the kids were so appreciative as usual. They are fun to cook for!

This would be a very affordable idea for anyone who needs to have a party or other occasion to feed a large group.  It’s fun, too.  Even though it was a simple presentation, it made it feel special to the kids.  I could tell by their comments. 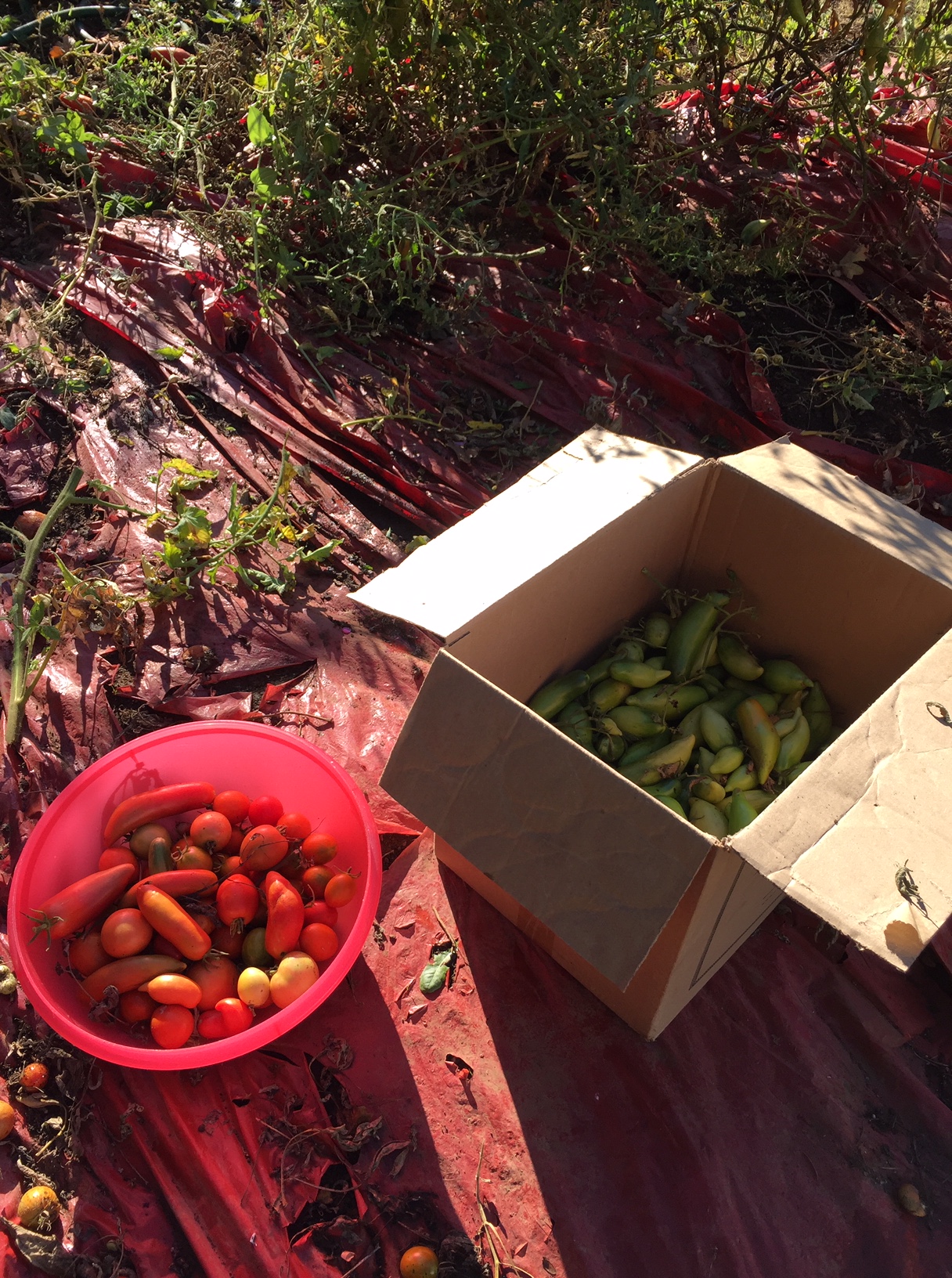 I worked 3 different times, putting the garden to bed for the winter.  I’m still not done, but am gaining on it.  Now I need to make more pasta sauce and Salsa Verde with the tomatoes.  The green ones are for the Salsa Verde.

Rob was able to till up a portion.  I’m glad he did, since I cannot handle the large tiller.  However, his bad hip does not allow him to do that kind of thing for very long.  So, he did what he could, and will work on it again another time.  He bought 20 bags of something to amend the soil a while back.  I think it’s steer manure or garden compost.  We need to get that on. 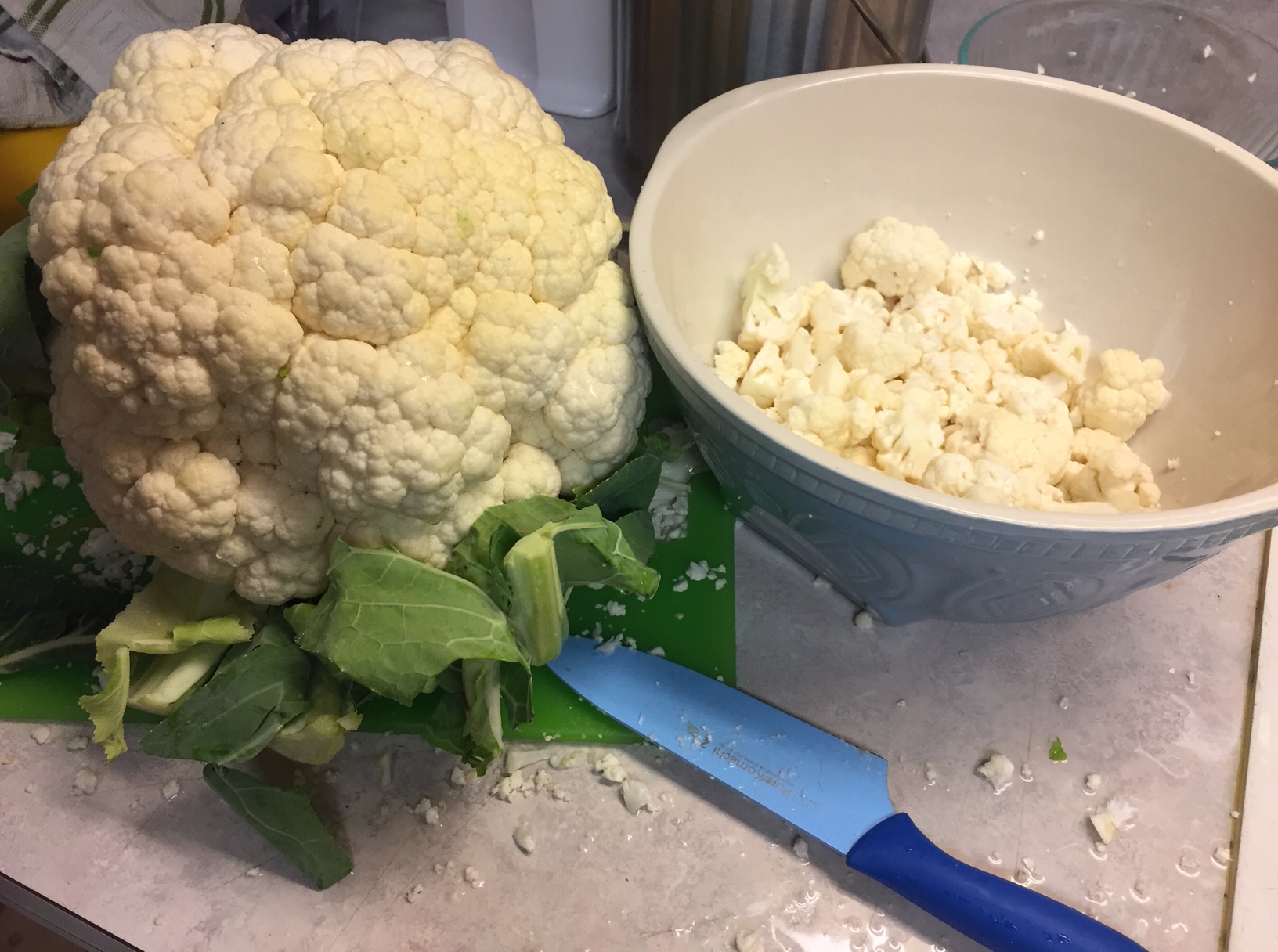 I didn’t need many groceries from the regular store this week, so we spent our money elsewhere.  I got cauliflower from farm stands–2 at each place, since I took the last 2 at the first place.  I also got 25 pounds of both onions and potatoes, and some hot peppers.  It’s hard to believe we have eaten almost every single one of all those onions we grew and every single potato as well.  I feel we grew so much in that garden, and feel great that we have used it so much.  It did save a lot of money over the summer, and the preserved food will continue to bless us during the winter. 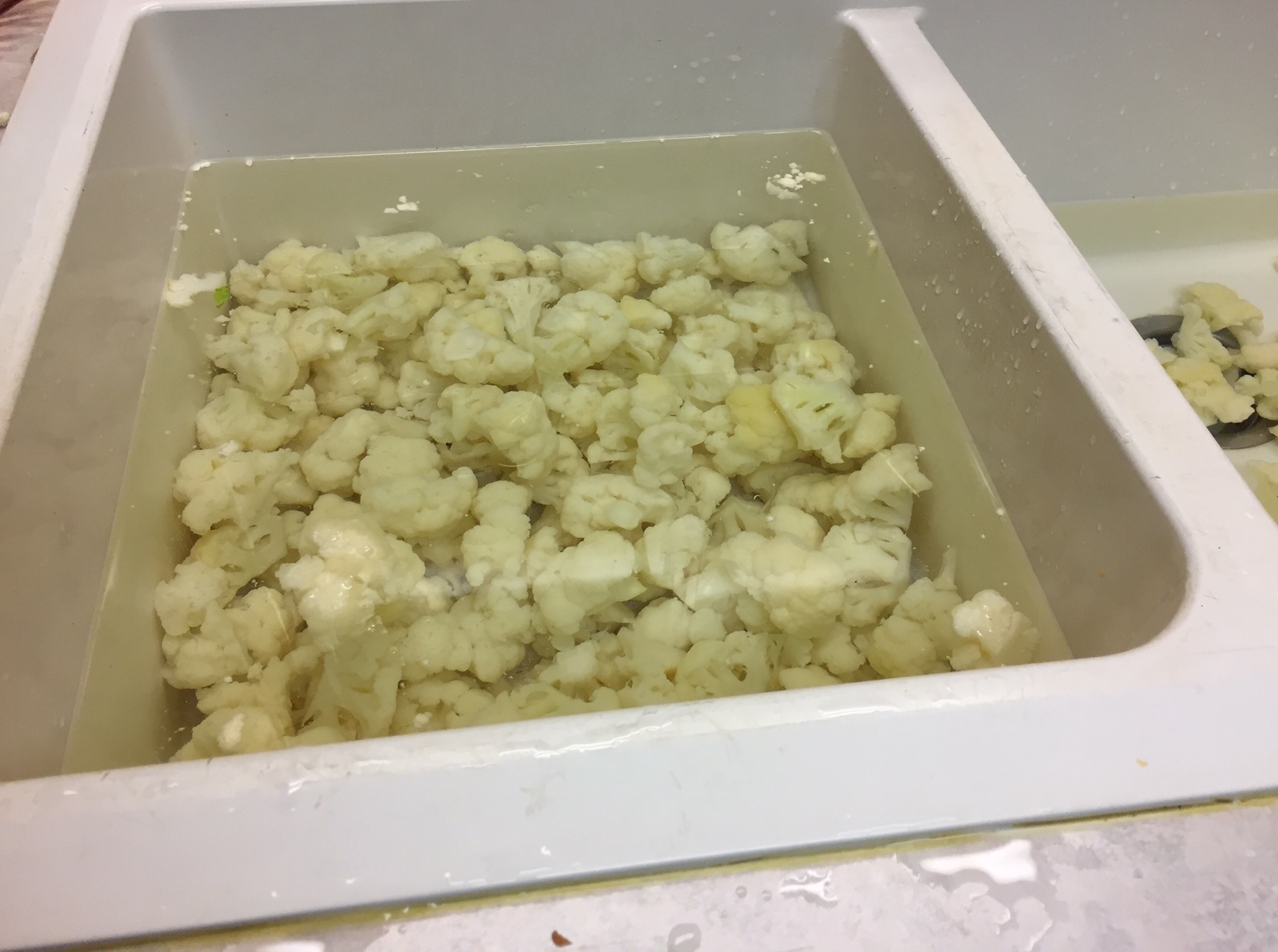 They were huge heads.  We ate a bunch, and I still got 16 quart-sized Ziplock bags full. 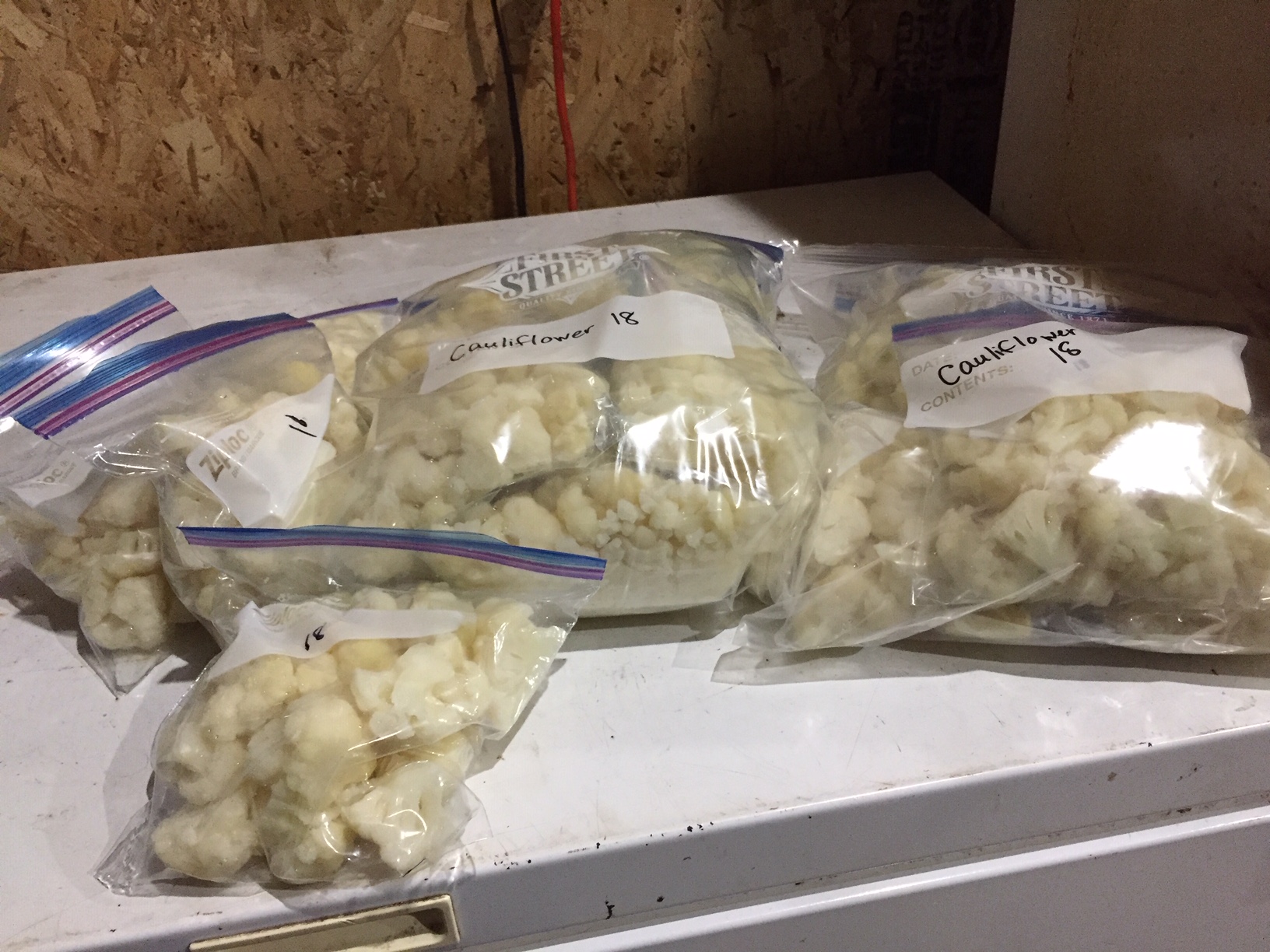 The family likes it cooked with a little cheese on top, or in cauliflower-cheese soup.  I have also made some things using it chopped up in the food processor (riced) to make things more low-carb.  I did make cauliflower pizza crust last winter. 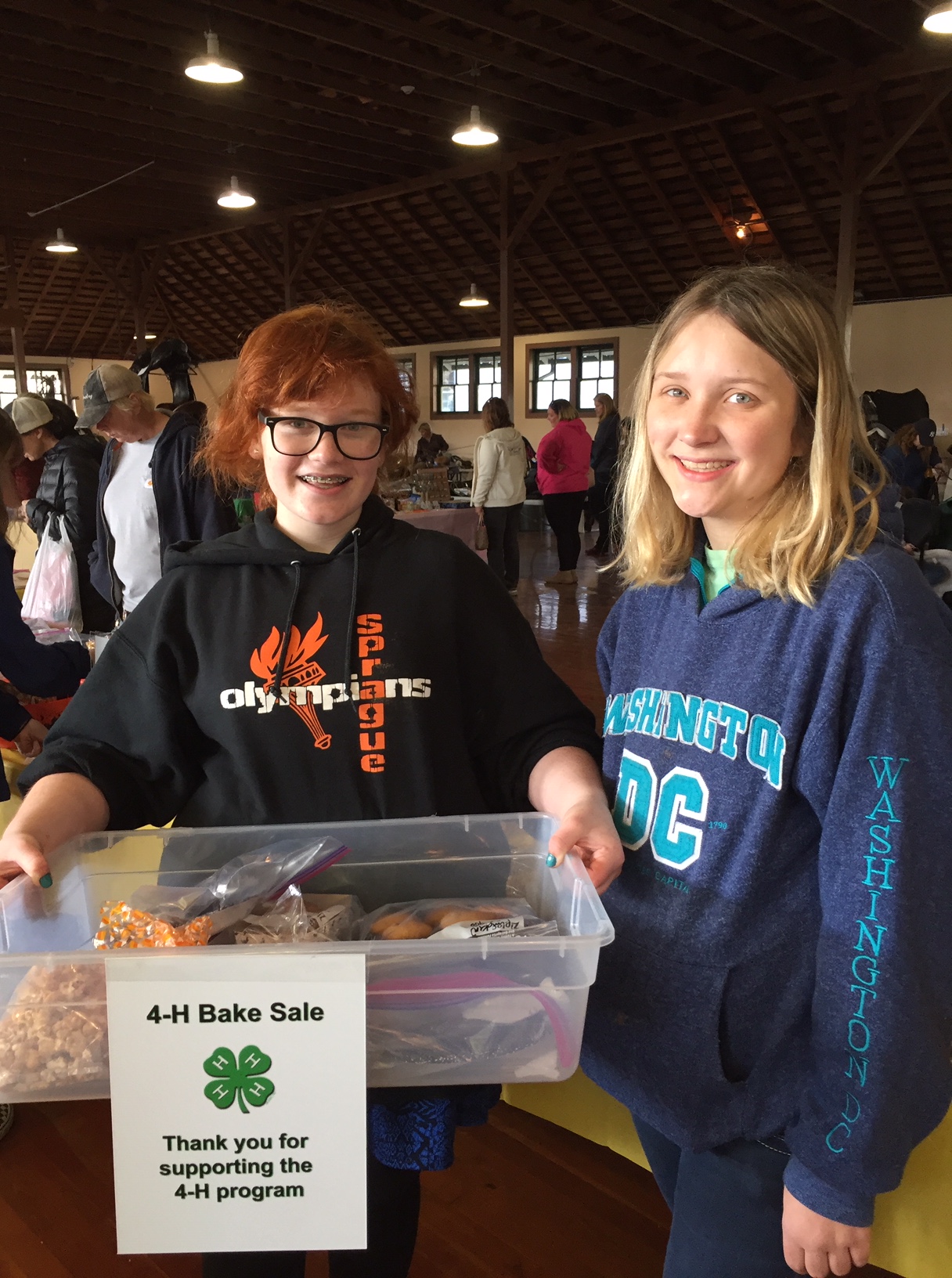 Rob, I, Patsy and Alissa volunteered at the 4H bake sale on Saturday.  The girls especially enjoyed taking bins to the barns where there was a tack sale going on and selling the goods out there.  The 3 teams did very well.

Rob and I stayed back at the 4H building and helped package all the goods the clubs sent in.  Alissa and I made caramel corn to bring and every bit of it sold, which is a good feeling.  Patsy and Alissa made one batch of Muddy Buddies with Rice Chex right there at the sale, so the aroma would entice people to buy baked goods.  When our shift was up at noon, almost all the baked goods were gone–a wonderful position to be in.  The lady in charge was delighted. The sale continued for an hour or two after we left, but she figured they would run out, and she had someone coming in to buy anything that was left at the end.  Several hundred dollars were made, but I don’t know the exact figure.  100% of it will be used on 4H programs. 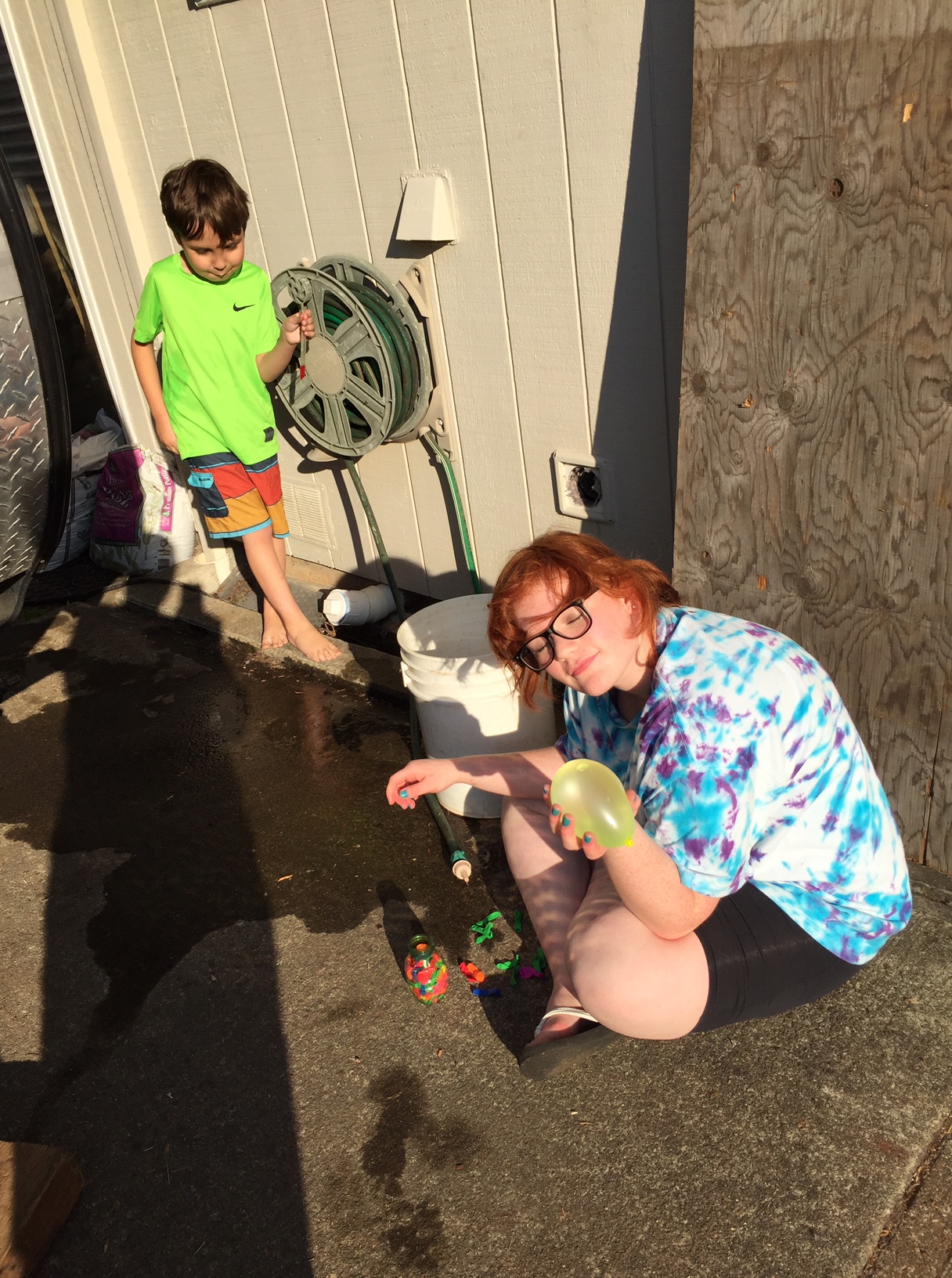 I think our extra-warm, dry spell is about over, but the Patsy and Jake decided to have one more water balloon fight this afternoon after church.  They got out popsicles, and Patsy filled up 20 water balloons.  Then they started the games, and throwing them back and forth. 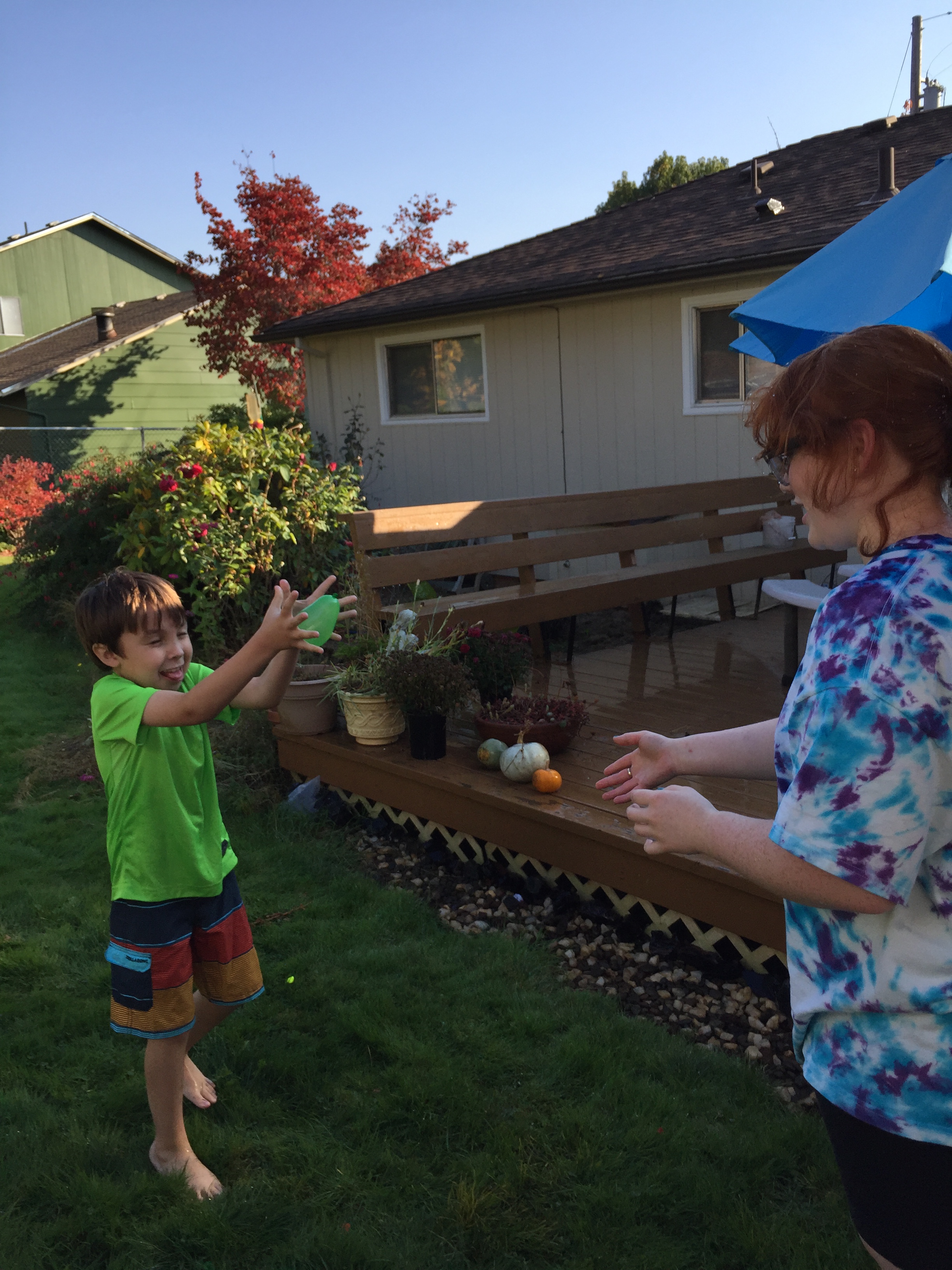 We also went to the library on our way over here from church and Family Sunday dinner, and Jake and Patsy chose books and movies.  Michaela was with us, but she didn’t want to go in, so Rob stayed in the car with her. She also didn’t want to do water balloons.  That’s ok.  She had fun in her own way.   It was good to get the routine going again.  We have had one family member or another gone on vacation for quite a while now, and have had various ones get sick, so have been unable to get the crew together very often lately.  Hopefully, everyone will stay well now.

How did your week go?  Did you save money in some way, or do something that fed your soul and made you feel like you were thriving?  I’m expecting to have another busy, but good week.