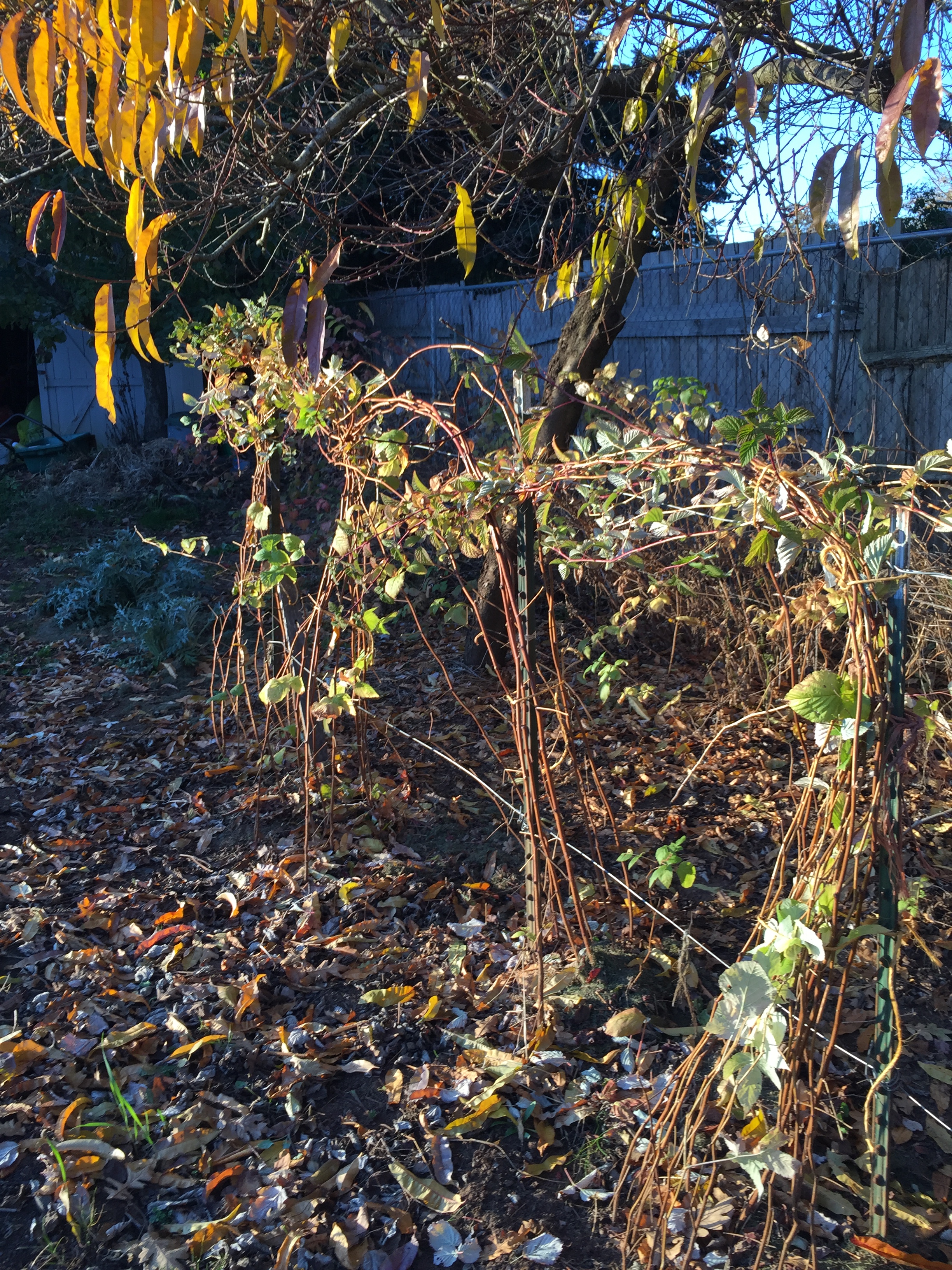 I have worked on my berries 3 or 4 times, in small bits of time.  So far I’ve finished tying up the June-bearing raspberries, the Marion blackberries and cut down 1/2 of the every-bearing raspberries.  This year, I am going to cut down the entire patch of ever-bearing ones, as that is a choice.  Rob wants to re-string the wire that was there when we moved in.  It is in bad condition.  According to the internet, if you cut all canes down, you will get one large crop mid-late summer next year.  I’m fine with that.  The June-bearing ones are finally old enough to give me some berries in the first part of summer, and I’ll rely on the other patch at the end of the season.  It’s worth a try. 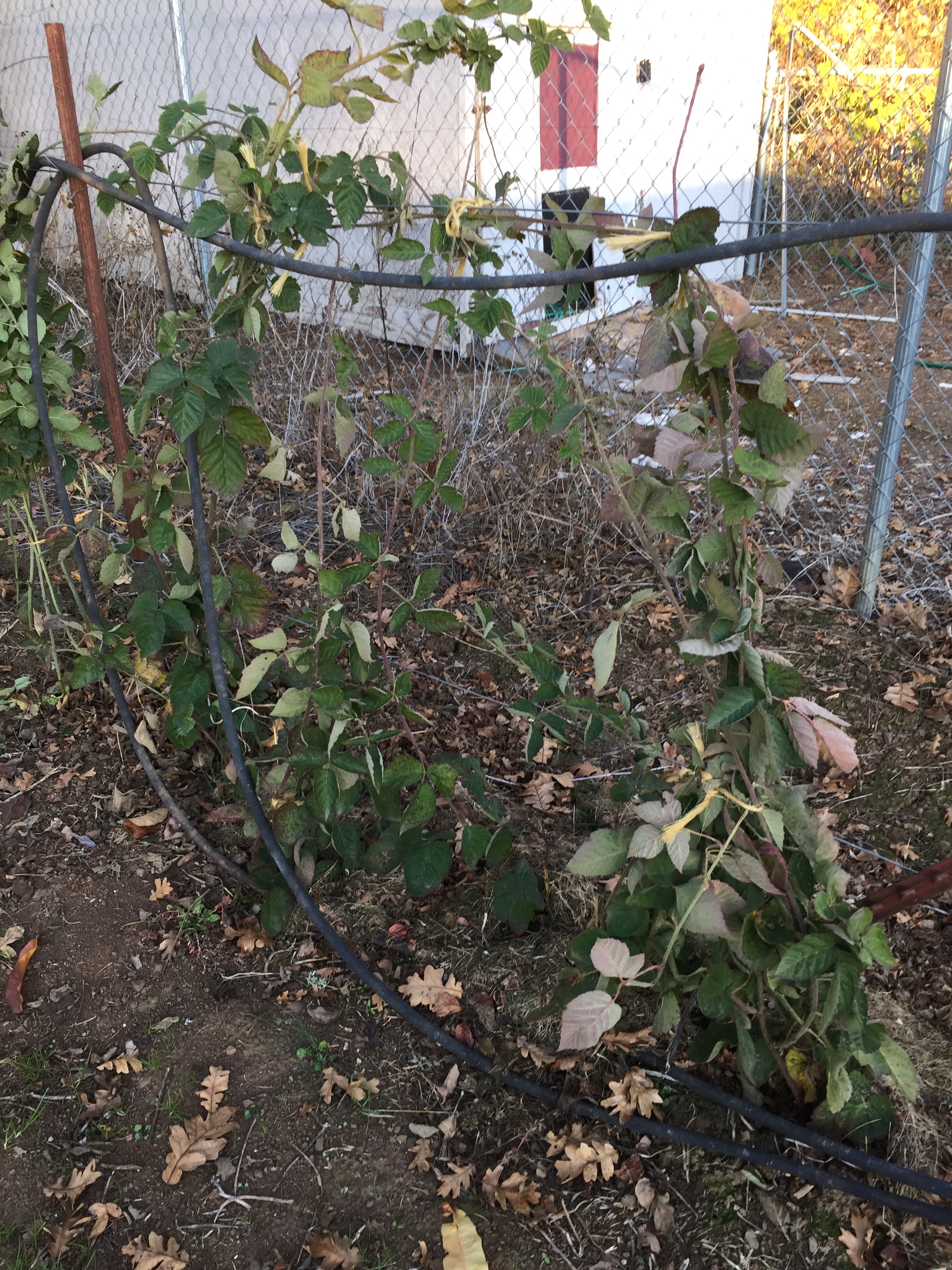 It was a very dry summer.  I don’t think there are as many canes on the Marion blackberries as there would normally be.  Still, I’ll fertilize and care for what are there.  I can go to my sister’s house and pick wild blackberries if I need more next summer.  She always has lots of those. 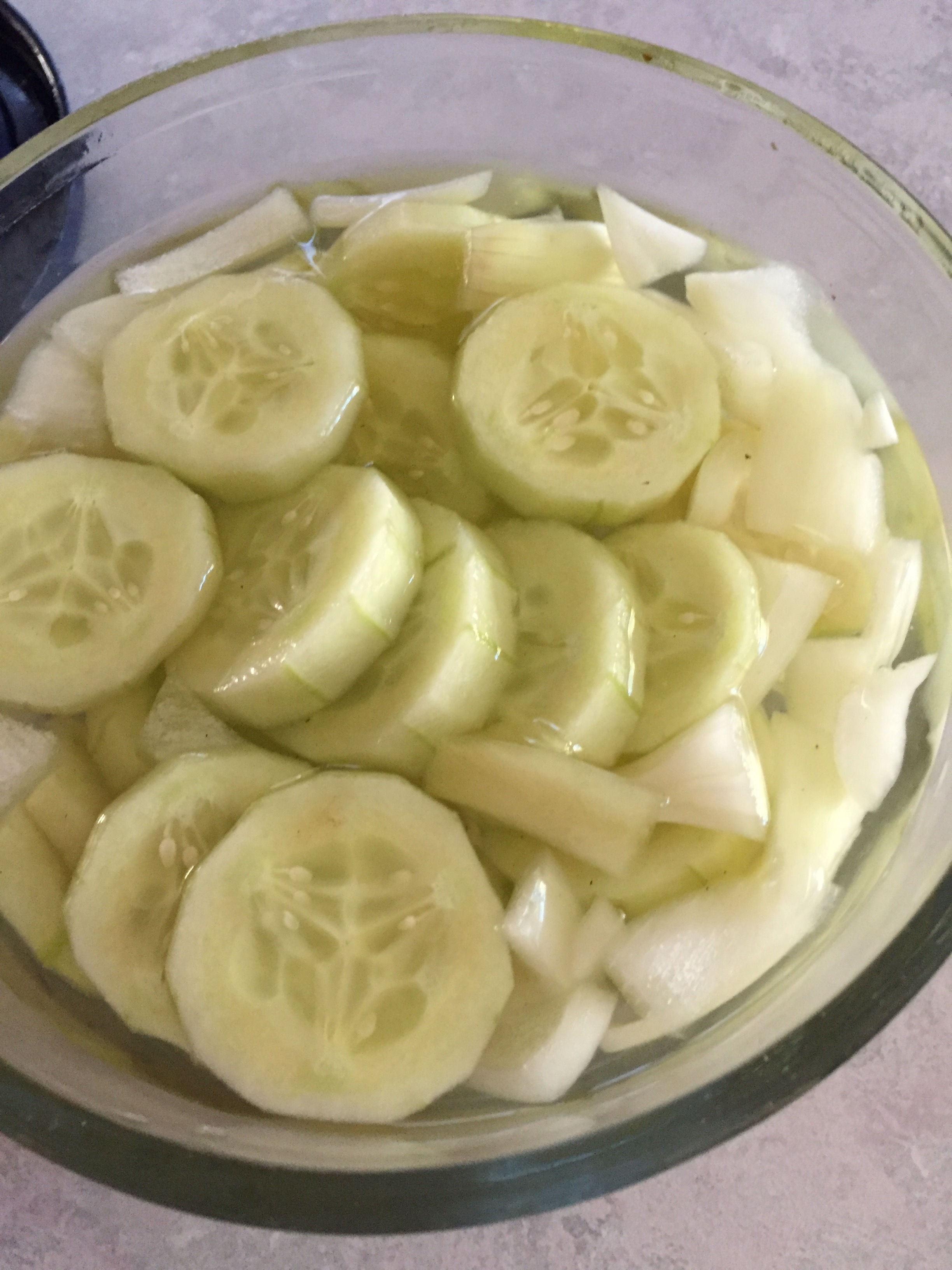 I have shopped until I’ve dropped!  I have been to the store so many times, I’ve lost count.  It’s become comical. I’ve purchased every sale and bargain item I regularly use from at least 5 stores that are near my house. I’ve bought hams, turkeys, baking ingredients, dairy products, goodies, produce galore, normal items such as sugar, treats such as peppermint mini marshmallows, and everything in-between.  Or so I thought.  I no sooner got home and began to make cucumbers (with marked-down cakes) and onions in a vinegar-sugar-salt and pepper mixture, which is a salad Rob likes to eat frequently, than I realized I was out of sweet rice wine vinegar.  I substituted, but went back for some the next day.  I got that, and no sooner got home than I went to make something….and I was out of cornstarch.  And, so it went. “I’m out of yogurt, honey,” was the next cry! I just had to laugh.  I was able to use all the grocery money and then some, my Ibotta money, my Bottle Drop money, and then some.  I actually had fun gathering all these things, but now, I’m tired of thinking, so will cruise along on what I got for the next few weeks, and only need to get produce and milk.  Or so I think:). 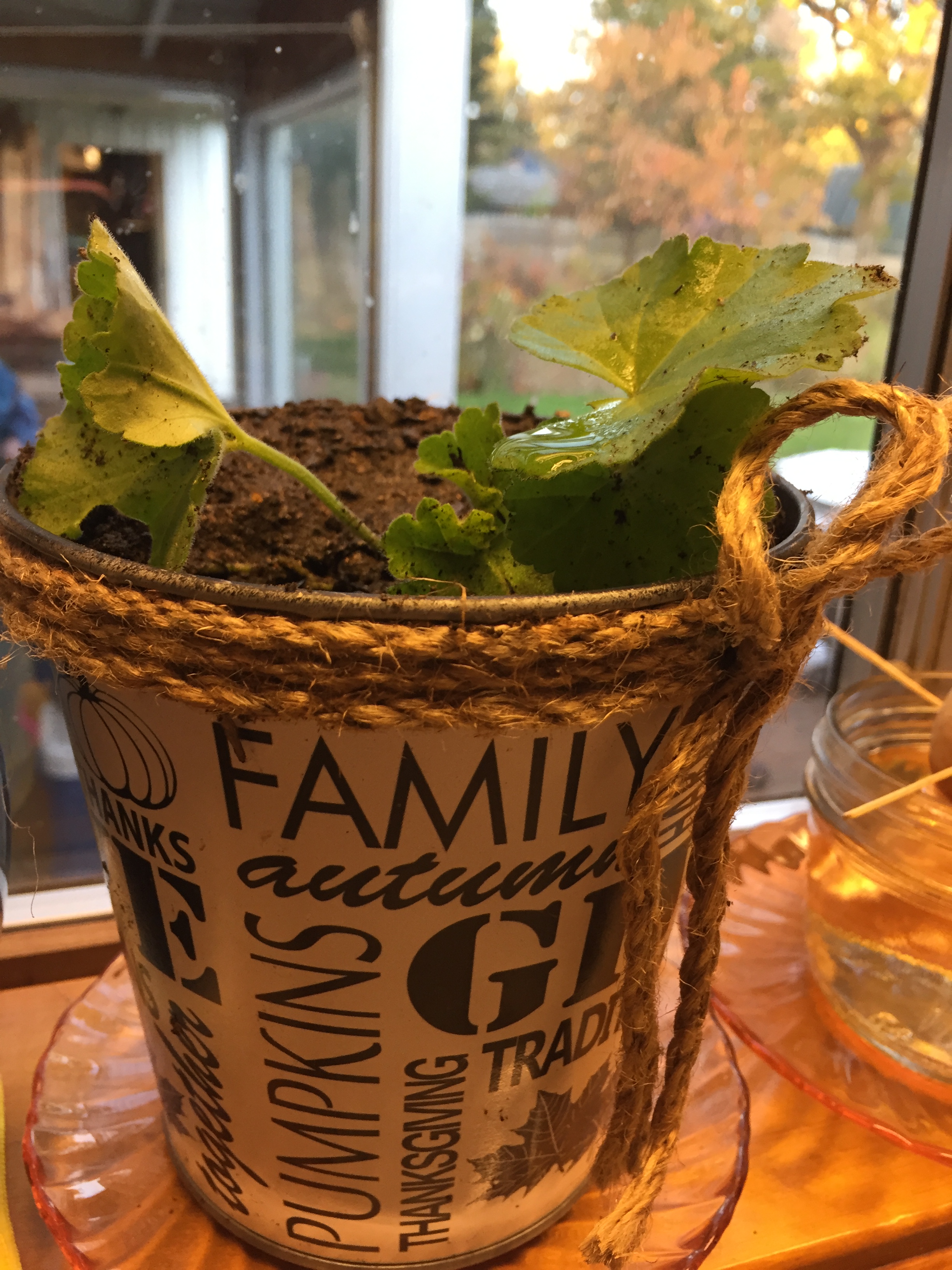 I re-purposed a little container from last Thanksgiving, by putting a geranium start in it and placing it on the windowsill.  There were 5 tiny geraniums that volunteered in the compost heap, and this is one of them.  The other 4 went into a large pot, and I put that in the greenhouse to see if they will winter over. 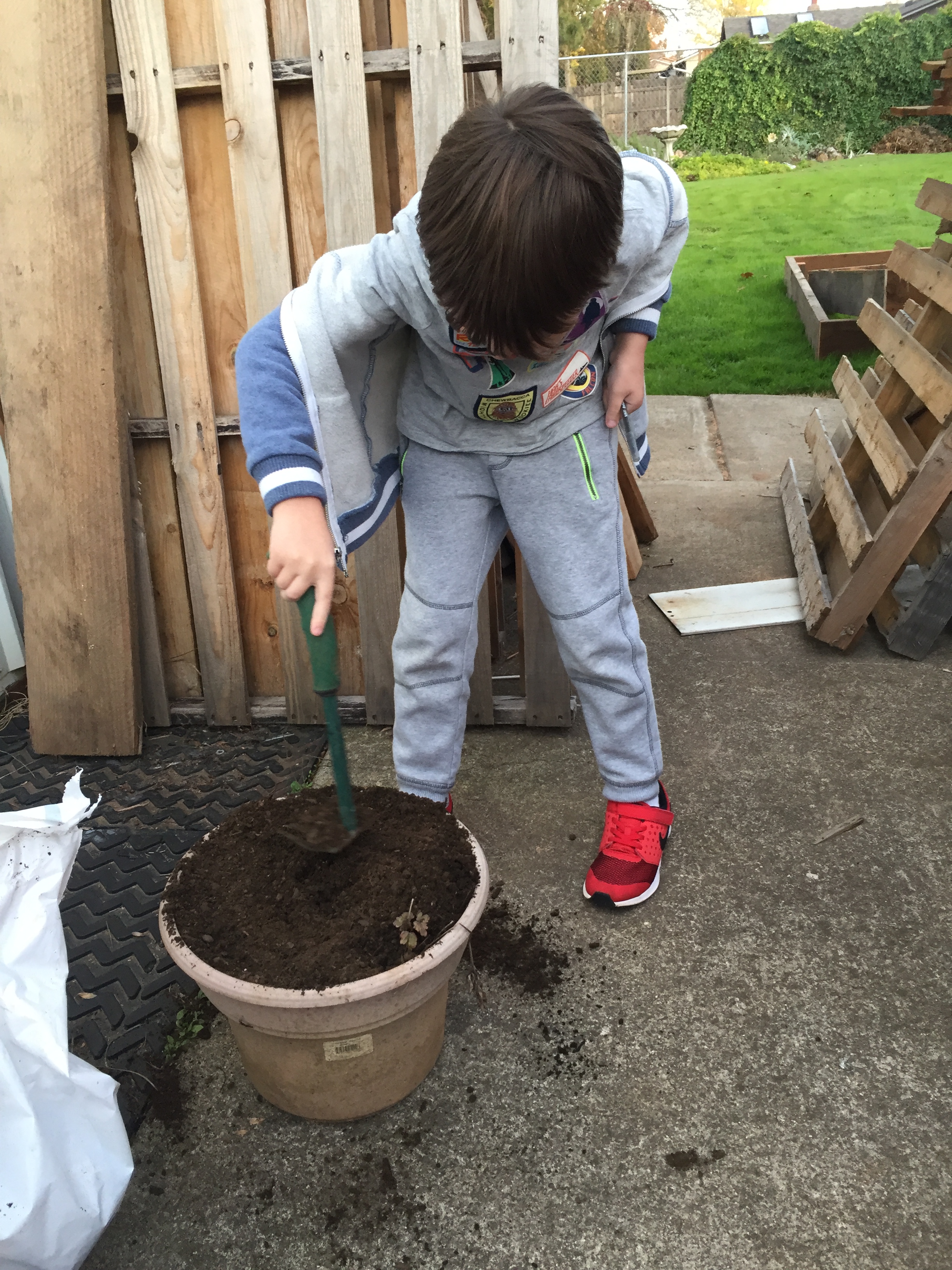 Jake planted some seeds my friend, Jeannie, sent him.  There is a little Columbine plant in the corner of the pot, just in case he forgets about the seeds and they die–he will have something, I hope.  That went in the greenhouse, too.

Last night, we had a slumber party with Jake and his older sister, Caitlyn.  (She’s in her 20’s and works full-time, so it was a treat to have her). Patsy played games with them after church, we watched the British Baking Show on Netflix, and ate sandwiches.  This morning, we went swimming at the YMCA, and I took Caitlyn to a natural store where she could get some gluten-free rolls she really enjoyed eating here.  (I bought gf cornstarch, for one thing!). We also hit up Winco for yogurt (much better price), and she got some groceries she needed.   We can’t beat the price of the $1.17/lb. ham they have right now.   It was fun to spend some time with her.  We used to spend quite a bit of time with her when she was little, but time has a way of passing, and those days are understandably rare any more, so it was special to me to have her spend a night on my couch once again.

I did some cleaning and organizing for Thanksgiving.  I started cooking the things that could be made ahead, such as cornbread I made and froze, to add to the dressing later in the week and some candied walnuts to add to the sweet potatoes.  We should have a great day on Thursday, and every day before that promises to have a little holiday fun in it as well!  I hope you week is shaping up well, also.