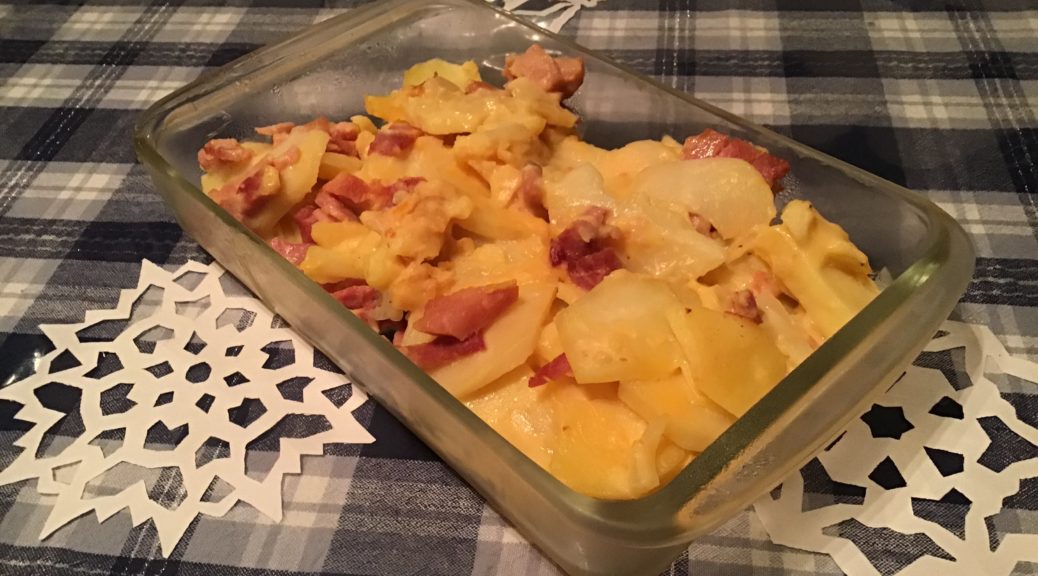 I am still working hard at using up things that need to be used. As simple as that sounds, it has taken some effort and creativity to stay on task. As the month nears an end, I am realizing that there are still a LOT of items that need to be used. So, I will continue this project into February, while buying a moderate amount of groceries as needed. Here’s what I did this week.

Did I mention the ugly produce I got for free 2 Wednesday nights ago? I’ve been working to use it up. We’ve been eating the mandarins, trimming up the apples, I cooked the spaghetti squash and am working on using the potatoes. None of this is keeping well, which makes sense as I picked it out of the bottom of a tote bin which contained a lot of bad produce, as well as this usable stuff. (It was outside the church, for people to take if they wanted it. I don’t think it could have possible lasted much longer in the condition it was in, so I’m glad I found some good things)

I made cheesy scalloped potatoes with ham yesterday. I cut down the amount of the cheese a lot, and made it lower-fat and we had small portions so Rob could still enjoy some on his diet. It was really good, and there’s lots left.

I baked the spaghetti squash towards the end of last week. We ate some with salt and pepper and a little butter a couple of times. I put the last of it into these muffins instead of zucchini. It worked fine. I just chopped the strands up into smaller pieces and stirred them into the batter at the end. I put cinnamon sugar on the top and they were great! We have not used spaghetti squash very much in the past. When we put pasta sauce on it as they say to do, neither of us liked it very much. So, we just decided to treat the free one as squash, which we both do like and not even pretend it was spaghetti:).

I did fry some up instead of hash browns one morning, along with some chicken sausage, and I enjoyed it as long as I didn’t try to pretend it was potatoes.

I got a few veggies from the old produce rack. There were 3 little zucchinis in one of the bags. I made zucchini noodle lasagna with them. I used cottage cheese that was in the back of the fridge, mixed with mozzarella cheese, frozen long ago, found in the depths of the freezer out in the shop. Although the cottage cheese was expired, it was never opened, so was perfectly fine. It really lasts a long time as long as it’s sealed. The sauce was turkey burger, onion, and the pasta sauce I canned last summer. Rob really likes this kind of lasagna, and it’s low-carb, low-fat, so he wanted some this week.

Much of the food we ate for the rest of the week was leftover from last weekend. I’ve had soup several times from the big pot I made last Saturday, and I started in on the ham I’d been saving out in the camper fridge. It is the last 77c/lb one I got right after Christmas and I didn’t freeze it because it is good until mid-February.

The other thing we’ve been burning through around here is eggs. Thankfully, my aunt got 2 dozen for me last weekend, and I got 2 dozen more. Rob eats eggs several mornings a week. I had eggs for dinner one night. Jake and Patsy started in on scrambled eggs last night and ate several. They were both back at it this morning, and I had some, too. Most of a dozen disappeared between last night and this morning. I’m delighted! Eggs are so healthy for us all.

How is is going for you?