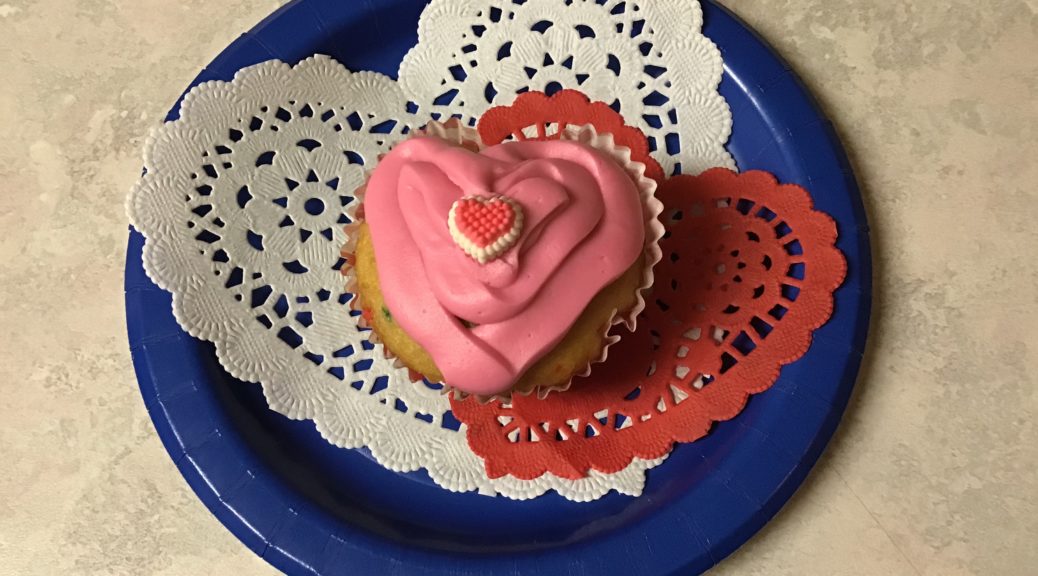 I hope you all have a very nice Valentine’s Day this year.

I made cupcakes for my daughter, nieces and nephew. Rob is delivering the ones to the kids this morning, when he goes to put Jake on the bus and get Michaela for their bi-weekly trip to the swimming pool. We added a small gift card for each of them.

The little sugar hearts were purchased last year after Valentine’s Day, so were on clearance. As long as you keep them dry, they last a very long time. There are plenty left for next year. The cupcakes were made into hearts by putting a marble in the edge between the paper and the tin before baking to make the paper push in, forming a rough heart shape. The tops were frosted using a Ziplock bag with a little hole cut into it so the frosting could squirt out. It was a fun, quick, inexpensive project. The cupcakes themselves were from a boxed mix, purchased for 39c on clearance after Christmas because it had little red and green sprinkles in it. I just added a bunch more sprinkles from my pantry, so they became multi-colored, like Funfetti. They are loaded with sugar and gluten, so I won’t be tempted to eat any. At all. I loved making them for the kids, though.

I made 6 of these cupcakes in regular round shape and froze them, unfrosted and clearly labeled “NOT gluten-free” for an upcoming birthday party. I’ll frost them when that day comes.

Yesterday, Rob and I had a wonderful, rare day. We decided to celebrate Valentine’s Day with a drive. We decided to visit quilt shops, so we drove around and went to a few. We chose ones out in the country so we could just enjoy the scenery. Since it’s a shop hop, we were given a kit for a 6″ block at each place. We only had a few hours, and didn’t worry about how many places we got to, but instead just meandered along. There are 16 shops spread out along a long, wide path that are participating and there is no possible way to get to all of them without spending way more time than we had–so we didn’t try to do them all. After I finish this baby quilt I’m working on, I will make up the blocks I got and figure out something to do with them. They are very pretty.

It was so much fun to be able to just visit and spend time together. You would think that we would have lots of time with just us, but in truth, hardly a day goes by that we are not surrounded by children, so we really enjoyed a few hours of “just us” time. And, we made it to pick up Patsy at school with 5 or 10 minutes to spare. Whew! Then, I had several hours to make cupcakes, cook dinner, and we went to evening church, so I was still able to get some thing done at home. Hopefully, we can remember to carve out some time again, soon! It’s such a good memory already:)