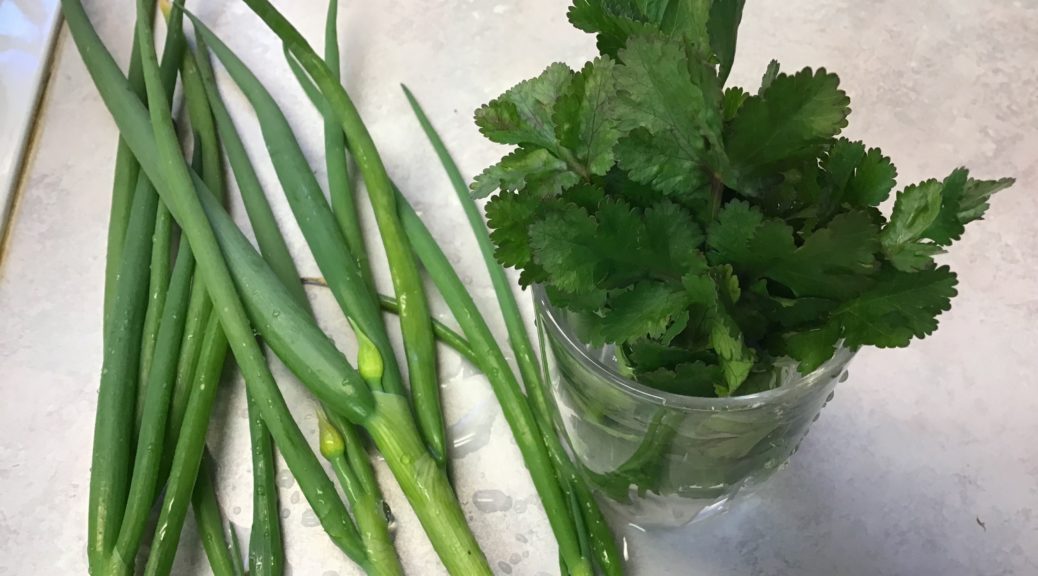 When I returned from camping last Friday, I hit the ground running. With my daughter home from Hawaii for a few days and a big birthday party to plan for her, the camping things to put away and the house to clean and lots of cooking to do for the large amount of people who were coming, I decided not to use any of the precious time to go to the store. Instead, I tried to figure out what I could make from my freezers and pantry.

I was delighted to find a few volunteer green onions and some cilantro growing in the garden.

I made cake and mixed fruit crisp. There were blackberries, rhubarb and peaches in it, topped with an oatmeal crisp. The birthday cake was a tried and true gluten-free recipe, and I used up the last scraps of sour cream from camping in it.

Rob BBQ’d chicken with some of the bargain chicken he got a couple of weeks ago and he did salmon. One large piece was a gift a friend gave us a while back and the other smaller package was from Safeway, purchased on one of their Friday specials. I used the green onions in twice-baked potato casserole, so I could make it the day before and warm it on Sunday. In there, I used sour cream, cream cheese and cheddar, in small quantities because that’s what was in the fridge. I served home-canned green beans and home-frozen corn as well, and one of my sisters brought a large broccoli salad. It was delicious. There were hardly any leftovers at all.

To fill in, we had things that were left from camping such as lunchmeat, cheese, extra salad ingredients, etc. Rob used the cilantro in some turkey burger, which he fried as taco meat and topped salad with.

On Tuesday, it was our turn to feed the college group. Alissa, our niece, helped us. They got bargain chicken, which Rob applied a rub to and cooked on the BBQ. He then transported it in 2 crock pots, with a little water in them to keep it moist. It worked well.

We baked potatoes and kept them warm in the roaster. We bought rolls at the bread outlet. We made green salad, rice salad and put out toppings for the potatoes.

Alissa decorated some box-cake mixes I baked up.

They looked very springy and festive. We were able to stay way under their budget for that project, mostly due to the bargain price we got on chicken a couple of weeks ago. As usual, the group was very hungry and very appreciative. There were about 35 people there, but there was plenty of food and even some leftovers. For that group, when you are cleaning up, you package the leftovers in baggies, take-home containers, little cups….whatever works, and the kids take it home for their lunches the next day. It’s a good system for everyone.

The only shopping for myself this week was a gallon of milk, which I grabbed when I was shopping for the church group. I’ve been making things like muffins and vegetable soup, and odds and ends. Of course, we ate at church Tuesday night, with the college kids.

My grocery plans for April are pretty simple. I want to have a lower-shopping month again, as far as it is possible. January was very low-spend, low-shop. February and March were big shopping months, as I had run out of quite a few things and found some great sales, so I stocked up. I was also given a lot of food in March, including 1/2 pork (we paid cut and wrap, but our friend gifted us 1/2 a pig he raised), a 25-lb bag of gluten-free flour, and more. There are a few more volunteer items in the garden. Now, it’s ridiculous in the garage! The shelves are full. There is extra food on the table that won’t fit on the shelves. The freezers are absolutely crammed! What a delightful “problem” to have! It’s time to use up things again. This keeps my stock rotated, my grocery bill averaged out for other “high-need” months, and I can put any extra into the envelope to put towards the beef we buy each fall. Of course, I will continue to buy produce and dairy products, along with Jake and Michaela specific foods for when they are here and grab any super bargains I find.