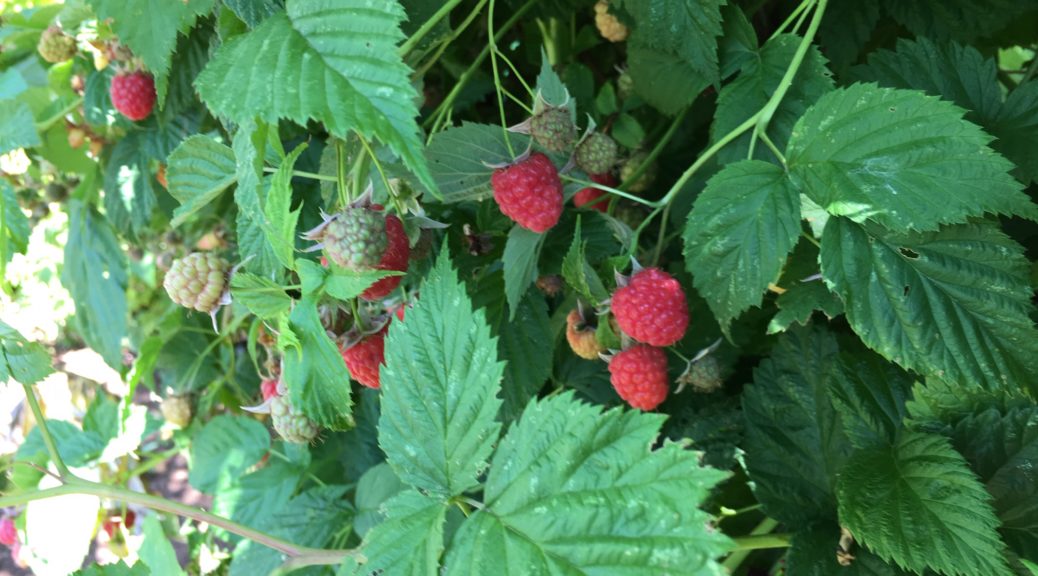 I’ve been very busy in the garden lately. I’m especially pleased with this crop of raspberries. These are the June-bearing variety, but I don’t know its specific name since they are starts from the farm where I grew up. I took them to our last house, took starts from those bushes when we knew we were moving, and put them in a pot, which my aunt kindly babied all that summer while I lived in my camper, and then I planted the ones that survived at this house. Last year I got just a few berries, but this year…WOW!

The first batch of green beans are blooming. I will be canning before I know it. Behind them, you can see that the cucumbers, tomatoes, onions, and the rogue cilantro patch are growing like crazy. Last summer, a cilantro bush went to seed and dropped a LOT of seeds. I just let them grow and we’ve been eating as much cilantro as we can in salads, tacos, burritos, etc.

Sometimes you win, sometimes you don’t. Of the 6 cabbage starts we planted, only 2 have survived to form heads. Behind them are the rest of the cauliflower. Of the 2 heads we picked, one was completely useless (buggy and tiny) and the other was about 3 inches across. Hmmm. I cut it into fine pieces and put it into a stir-fry. Those were plants Rob bought and they were left too long on the porch while we waited for the rain to stop in the spring so we could till.

The broccoli we started from seed is faring much better, probably because it was never stressed.

I planted out several Joker crisphead lettuce plants and they are starting to grow nicely. The rest of the plants from that package are growing tightly in a row, but I’ve cut twice from the 2 lettuce rows and they still need to be thinned badly! So, we are in lettuce season for sure.

I saw this amazing dragonfly on the sage bush today. It was cooperative and I got a picture. As you can see, the rhubarb is growing back already!

I am very glad to see how everything is growing, and most days I get outside for at least a few minutes to pull a few weeds, hoe or harvest. Today, I got a whole 5-gallon bucket-full. I know it won’t be long until I am drowning in produce, after all the zucchini is blooming. But until then, I will treasure every little snow pea, green onion, lettuce leaf and berry that I get.