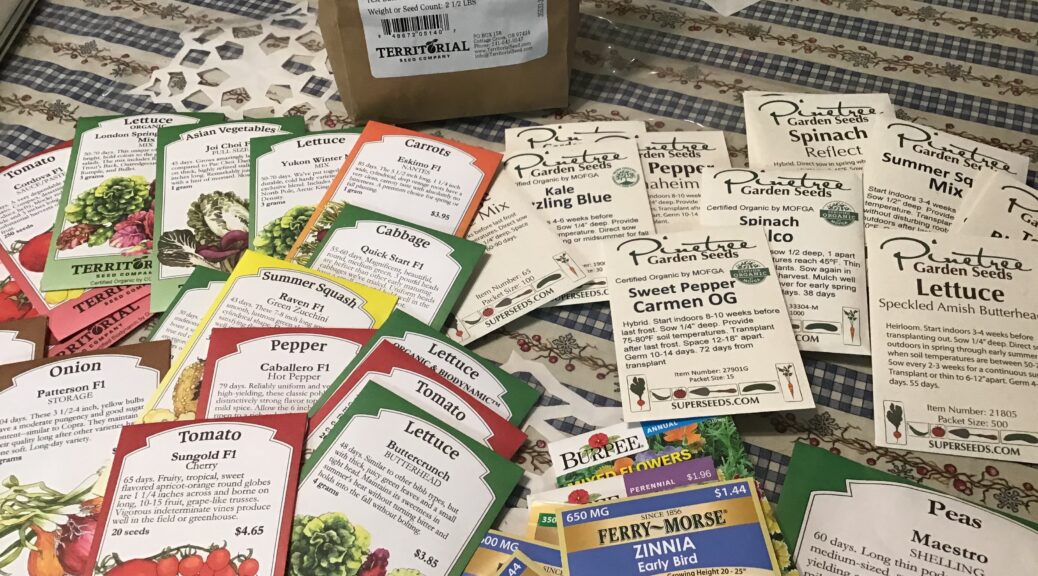 If I want produce like this again, I need to plan now. Rob and I have done quite a bit of garden planning this winter and I’ve already ordered and received my seeds. Here’s what we’ve got planned.

Over the past few months, we have been improving our side yard. There was a strip of grass that became a place to pile things, caused lots of moans and groans every time Patsy had to man-handle the lawn mower over there to mow the tiny strip of grass and was wasting water to irrigate something we did not like. Rob built raised beds. Cardboard was put in the bottoms and dirt is being moved from beside the camper to fill them in. Last week I mixed in 1/2 bag of purchased growing mix and some bone meal and planted 1/2 of one bed with strawberry runners that had grown from my existing strawberry plants. If we want strawberries, the beds need renewing frequently or they don’t produce well. I was happy to get this many new baby plants for free.

We have raspberry and blackberry (Marion) bushes growing as well. This fall, we cut down an old peach tree that shaded those berries and the back of the garden. I’m excited to see how much better things should grow with the additional water and sunlight they will get.

The bags on the left are full of leaves. Rob picked them up downtown where someone had raked them up and left them out for the taking. Patsy has since dragged them into the garden. They are still in the bags. When the sun shines on the bags as spring comes on, they will decompose more quickly then if we poured them out. At least they did the last time we did this and hopefully it will work again. In the late spring, they will be spread out and tilled in, as long as they are pretty broken down. Otherwise, we will have to wait as they will rob the soil of nitrogen while they break down if they are too intact. Part of our planning is a constant search to improve our soil. We expect a lot from our garden, so we amend the soil every chance we get.

Rob will clean the greenhouse soon. He has some winter lettuce growing now, and will start some of the baby plants soon. Right now, it’s not heated at all, but he will put a heat mat under the new seeds when he plants them. It’s been a very mild winter. We have a space heater we can plug in if we absolutely have to, but we’d rather not.

Here are some of the seeds we are using this year. We also have a bag full from of partial packets from previous years, and quite a few seeds Rob saved this past summer. Since it’s the first time he’s done so much seed saving, we are being a little cautious. We will use his and the purchased ones until our confidence has grown and we make sure it’s been done correctly. Still, we ordered about 1/2 of what we do sometimes. You cannot save seeds from hybrids–they won’t grow true to kind. Still, I grow some of those because I want the product they produce. The flowers were a Christmas gift. I love zinnias, so I know I will grow those!

It looks like a lot of seeds, and it is. I grow a huge garden, and we start our seedlings of things like tomatoes and peppers. We also give away some starts to my sister and others. I can and freeze large quantities of vegetables and fruits–I’m talking hundreds of packages and jars, so I need a lot of produce!

I ordered from Territorial Seeds and Pinetree Garden Seeds this year. I like to order from Johnny’s sometimes, but like to limit myself so I don’t have to pay as much shipping. We have several great garden centers around here and I can pick up more things if I need them. I like to order, though, because I like to choose the varieties I want with the disease resistance and productivity I want.

Here are some of the kinds I like to grow. Remember, some of these have been saved, or I already have a partial packet of them so you may not see them in the picture.

Onions: I have green onion seeds we saved. I get packets from the Dollar Store sometimes if I need them. I grew Patterson F1 onions for storage and Red Bull F1 as well, from Territorial, and will do so again. You cannot save these seeds, as they are hybrids. They store well. We still have tons left and usually they last until spring if they are not all eaten. I grew white onions last summer. They are all gone because they do not store well.

Cabbage: Last fall, we planted Quick Start cabbage from Territorial because is was the only kind Rob could find seeds for. They were in short supply around here last summer. It grew quickly, made a great fall crop, and I still have one out in the garden that looks good. The rest have been picked and eaten. We ordered another packet of it. It is a smallish head, grows quickly and tasted great. I’ve grown the Cabbage Mix from Pinetree for years. It is all kinds of cabbage mixed up–red ones, big ones, small…all mixed up. I only got 1 red one last year, and will have Rob make sure to not thin out all of those this year, as we enjoying the cabbage/apple relish (?) mix I canned. Even with only one, I got 6 or 7 small jars.

Carrots: I’m not picky on those. I ordered Eskimo F1 from Territorial, just for fun, but am happy with Danvers Half Long from the Dollar Store or anywhere else.

Spinach and Greens: Joi Choi Pac Choi from Territorial is our favorite Boc Choi for early spring and fall planting. Rob’s just getting into kale in the past few years, and finds he likes the Tuscan kind. We ordered Dazzling Blue Kale from Pinetree to try it, and have been enjoying several kinds of kale my friend Jeannie sent me seeds for. We are newbies to growing celery, and have lots of skinny, leafy celery with hollow stems growing right now. We will try Tango from Pinetree this summer and see how it does. We’ve grown Bloomsdale Spinach from various sources, ordered Palco from Pintree for early spring and Reflect from Pinetree for summer planting.

Beans: Blue Lake Bush beans are our favorite. I got 2-1/2 pounds from Territorial this year, as we grow a tremendous amount. I can many quarts each summer. Carson is a good yellow bush bean. I grow a few rows of those and usually mix them into some of the green ones when I can, if I’ve got any ripe ones, for color variance. I also like growing some pole beans for a continuous crop until fall so we can eat fresh ones as long as possible. The bush ones give a large crop all at once for preserving. Rob saved a bunch of Blue Lake Pole Bean seeds. I bought Violet Podded Stringless Pole Beans to grow. They were a bust last summer, but I’ll try again with more sunlight to help them along this year.

Tomatoes: Glacier (Territorial) for small, extremely early tomatoes. Black or Chocolate Cherry, Sungold and Yellow Pear for small tomatoes to snack on. We got Fantastic F1 from Territorial for canning, Cordova F1 as a sauce/paste tomato and are trying CarmelloF1 for the first time for slicing. We grew BuffalosteakF1 last year and will use the rest of the packet this year. We could not get WillametteF1 this year from Territorial, so Rob ordered some from the internet. We’ll see what they turn out to be:). We got some Longkeeper seeds. I grew them years ago and want to try again. The green tomatoes Rob picked and ripened lasted until Thanksgiving. Maybe these can do better.

Broccoli: Hybrid Broccoli Blend from Territorial. It gives broccoli at different times, as it is a mix of different varieties, which is nice.

Herbs: Dill, basil, cilantro, parsley. I’m not picky. I order some, get some from the Dollar store, and save seeds. My parsley self-seeds, as does the cilantro and sometimes dill.

Peppers: Carmen (Pinetree or Johnny’s)–it’s a long sweet pepper that ripens early, a must for my climate. I’ve grown it for years. I’m growing Jalafuigo Jalepeno from Pinetree this year as it promises to be larger and spicier than others. Anaheim can be purchased many places. Serranos from the Dollar Store work fine, as I only need a few. Lola F1 from Territorial is a recent favorite. It’s a long, light green sweet pepper and bears heavily. Rob started Hungarian Wax Peppers from the Dollar Store last year, not knowing what they would be exactly. They were great and we still have a package…We also have some bell pepper seeds from there.

Peas: I grew some Tall Telephone Pole peas last year and got a few. This year, I will go back to an old favorite, Maestro, a bush pea from Territorial. I don’t grow them every year, but I plan to put some into one of the new raised beds for an early spring crop.

We use multiple succession plantings of Oregon Sugar Pod II peas. Tons! We eat them as fast as we grow them and I plant a new, tiny row every 2 weeks all summer long.

Beets: Early Wonder Tall Top is our favorite. I’ve also used Detroit. Pinetree Beet Mix is good, too. Rob got a whole handful of Early Wonder Beets on clearance at a local farm store, so that’s what I’ve got this year, plus a bunch of the mix left over. Even with all I grew last year, we had to buy a bunch to pickle–beets are a favorite around here!

Pumpkins and Winter Squash: I struggle with those in this garden. I’ve tried Butternut and Delicata with poor results. I will try again, but was super grateful for the Sweetmeat and Butternut Rob’s cousin gave us, and the ones we were able to purchase at a local farm stand.

Summer Squash: Raven F1 Zucchini from Territorial is great, as is Easypick Gold F1. From Pinetree, I like Tromboncini and Summer Squash Mix. I use a lot of those and make relish and pickles with this as well as eat it fresh.

Cucumbers: Lemon cucumbers grow great and self-seed often in my garden. Rob saved some seeds of those this past summer. Pickling cucumber seeds are fine from the Dollar Store, but, again, Rob saved some. The slicers–same story. I also have some from last year in case his don’t grow, but I think they will. I use a great deal of pickling cucumbers–I canned about 50 pints last summer–so I need a lot.

Flowers: I always grow zinnias and they self-seed in my garden. I like nasturtiums as well, plus Rob grew great pansies last year. He also grew snapdragons from the Dollar Store seeds and they are still alive. He likes to experiment, and so I will have whatever flowers he decides to grow at the time. Last year he saved over the geraniums again, so I will have those. He started a bunch of those from seed last year, and then some cuttings from ours and my aunt’s plants.

Even with growing all of this, sometimes crops fail, or I can’t grow enough, so my sister is gracious enough to let me pick from her garden. We also buy things from farm stands, such as cauliflower, which we do not grow, or peppers if I need to make relish before ours are ripe. It’s always a changing process, but keeps my mind busy and my body active. I love gardening!