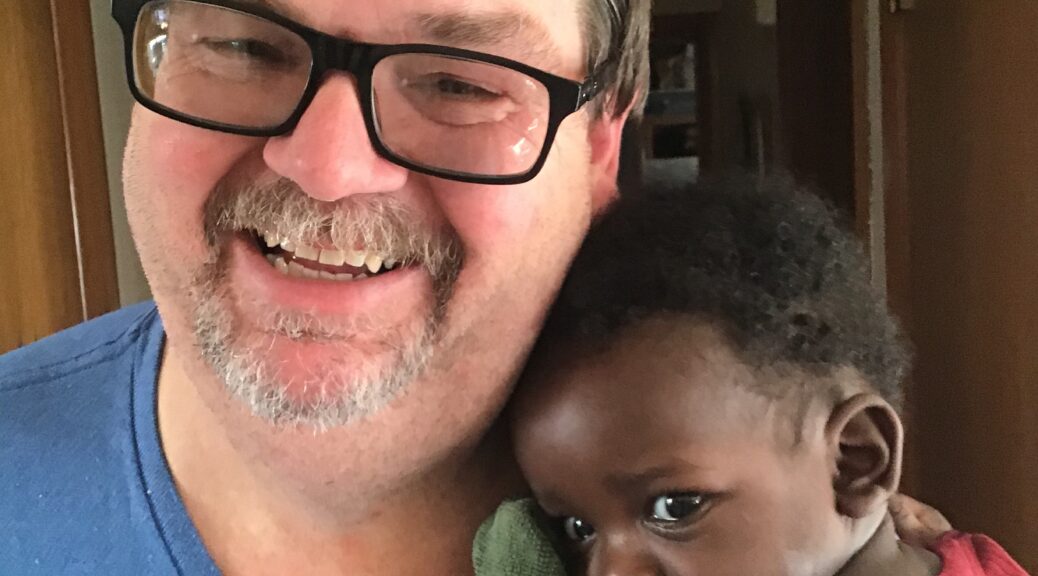 Somebody likes his Grandpa. And, Grandpa likes him, too. Rob and I had the pleasure of spending some time with the baby this week–loved it! I’ve always called Rob the “Baby Whisperer.” I’ve seen absolute stranger babies leap for him on more than one occasion. It’s so cute to see them together.

I picked another large bowl of lettuce from the greenhouse. We mixed it with store lettuce and had many salads this week. I used some of our garden cabbage as well, in a stir-fry. It called for fresh broccoli, which I didn’t have, so put large chunks of cabbage in instead. It was great.

Our method of menu -planning this week was a mixture of all the ways I do it. I made a list of meals in my notebook, and I made a couple of recipes I had chosen and marked with sticky notes in magazines a while back. I referred to that list the first part of the week, then Rob went out to the big freezers in the shop and grabbed a whole chicken, some steak and hot dogs and we just cooked those the second part of the week. I made 2 soups–clam chowder and broccoli. We ate soup several times. It’s so easy during lunch times to just grab a bowl and microwave it. The broccoli and broth were some I’d frozen and the clams were given to us in some canned goods Rob’s mom couldn’t use and passed on a couple of months ago, added to potatoes and the milk that seems to be on sale constantly around here these days. Inexpensive meals, and really a treat this week. I plan to do a chicken-vegetable soup this week, since I boiled the bones of the chicken Rob took out of the freezer and I have tons of frozen garden vegetables.

He went to Safeway for the bargains. Our favorite one was a 3-lb package of bacon for under $6. He divided that into small baggies and froze them to pull out over time. He got yogurt for 37c/each, bread for 77c each (2), and a couple of other things we needed. Fred Meyers had butter for $1.77, so he got the 5 allowed, and topped it off with tortillas for $1 at the Dollar Store. He came out under $30 and that’s more than enough for this week. Last week’s shop was more extensive, but we are right on track for another month where we easily stay within our grocery budget and should be able to set some aside for bulk purchases later on.

We filled the yard debris bin again with clipped branches. Rob also took a chain saw to the fig tree in the front yard and removed the weak, dead branches and also worked on other bushes/shrubs. We are debating on whether to cut down the fig tree entirely, or just remove the weak and damaged parts, but don’t have to decide now. The bin only holds so much at one time. Since they will take that debris bin every week, for free, we love to fill it up as many weeks as we can.

Rob and I got our first Covid shot. We were offered the chance, due to our job–we are considered part of the health care workers, as we care for developmentally disabled clients. We were a little scared, as it’s so new and all, but so far, so good. (At least I was–I absolutely hate shots!) We go back in a few weeks for shot #2, and then I will be able to go out and about so much more freely. I know everyone doesn’t want one of those shots, but I have to admit, I’m excited to know that I won’t be spreading that nasty virus to any of my loved ones. That’s worth a lot to me.

We got our stimulus checks. We had an extensive repair done on the van, so…easy come, easy go. What a blessing to be able to drive a safe van! And, what a blessing to see the Lord provide for our needs in many ways. He just never fails us. Ever.