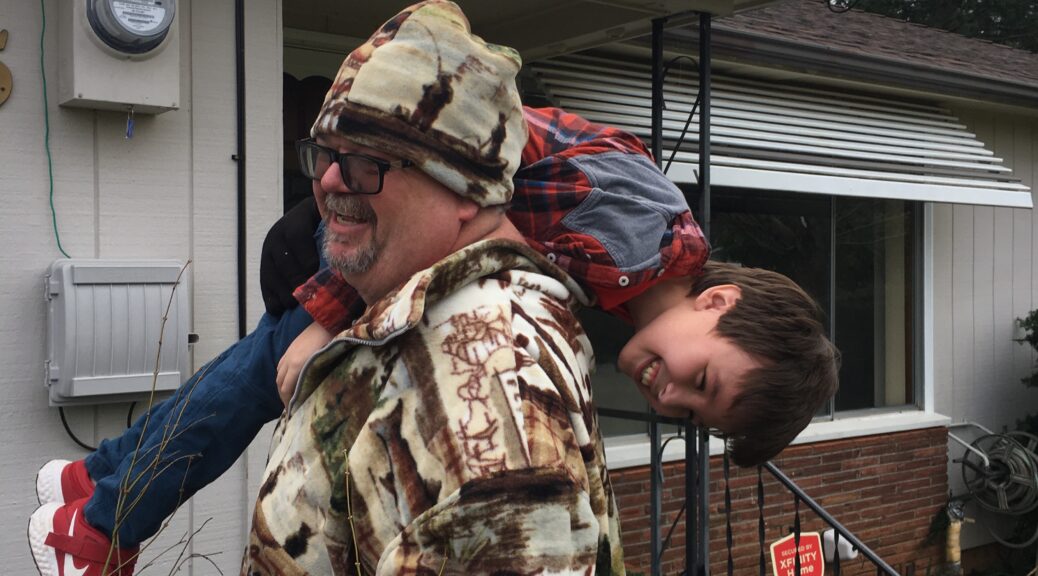 This week, we trimmed up more branches.

With a little help from Jake, we filled the bin as full as it would go, and still have 2 garbage cans and a trash sack full, waiting for another garbage pick-up day. He wasn’t sure about getting in there, so clung to Uncle the whole time. In the end, I think he enjoyed the experience, but his slight weight didn’t make much difference in compacting the twigs, so it was mostly for fun:)

Rob’s hat and pull-over is another Christmas present I sewed, I just didn’t want to post it before Christmas in case he peeked:). It’s coming in handy as we continue walking for exercise. We try to get out most days, and especially when either Jake or Michaela is with us, since we like to make it one of our activities on those days to keep them engaged and occupied.

We had a gorgeous day today, so decided to drive down to the Oregon Coast. Rob and Patsy collected rocks and I walked the dog.

I packed a picnic lunch and we ate it at this overlook. I never tire of the ocean. I could watch it every day. It’s a special place for both Rob and I and we were so happy to be able to visit today. Since we took our lunch and one of the small cars, the trip was very affordable.

One day, we took Michaela with us when we went to the dentist. Our dentist is a distance from our house, and we wanted her to have some fun that day. After the appointments, we went to a park we knew of and fed the geese, ducks, seagulls and a pigeon some buns I had taken along for that purpose. She didn’t mind the rain, and seemed to enjoy herself tremendously, taking the longest time to break each bun into bits and throw the pieces to the various birds.

We also drove along the rail road tracks and looked for trains. It’s one of her favorite things to do. Imagine our surprise when we came upon the remains of a train wreck from at least a week ago. We had felt that would be cleaned up by now, but it wan’t. There was a tremendous pile of lumber being cleaned up, and twisted, mangled railroad cars. Thankfully, no one had been hurt, but the mess was horrendous. Since no one was hurt, we were glad she was able to see what was involved in the clean-up of such a wreck, all caused by a tree that had fallen on the tracks.

To top off the day, she got to use one of her Christmas gift cards to drive through McDonald’s. For her, it was a great day, and we didn’t have any cavities, so it was win-win for us all:)

Rob’s mom wanted him to stop by to pick up some things. His sister had brought avocados from her neighbor, there was a huge box of food from his cousin (a Christmas gift), and she also had quite a few groceries she had been given that were too much for her to use. I was delighted to see it all.

I was shocked to find all this broccoli in the garden. With the cabbage we are still eating, plus the large bowl of lettuce I picked, our purchased fresh veggies are stretching farther than ever. In fact, when Rob asked if I needed him to stop and get groceries this week, I was able to say that there was not one single thing I needed this time. In fact, I’ve decided that no more groceries will be purchased until the fridge clears out a bit. It’s too full.

That is because….(sad face)….the camper sprung a leak in the recent rain and wind storms we’ve had. It has been towed away to be looked at by a repairman who will hopefully pinpoint the problem quickly and be able to fix it immediately. It’s been a whirlwind week sopping up water, washing things that got wet, and cramming all the camper fridge food into my house fridge. The camper fridge doesn’t hold that much, but enables us to buy larger quantities of things like eggs (which we recently did), so now my house fridge is stuffed with eggs, for one thing, and a plethora of condiments for another. It looks like insurance will help with at least part of the repairs, so that’s a good thing.

In the meanwhile, the Oregon Park Service announced one day that it would be opening up camping reservations for a 6-month window, starting the next day. They’ve been slowly letting people reserve sites further ahead–starting at 2 weeks, then a month, and so forth. (Before the whole thing shut down last spring for Covid, it was 9 months). We knew the good ones were going to go fast, so we got up at midnight that first day and got several prime spots reserved over the next few months. We know Jake wants to go with us part of the time, and are hoping Michaela will take the plunge and go some time, too. We were so glad we were so aggressive, as they mentioned on the news the next evening that the website stopped working or something, and many people were disappointed, and that when people did finally get on, most of the good spots were gone at desirable times. Whew! I just can’t even think of taking special needs kids camping for several days without full hook-ups since the showers have been closed at most campsites since Covid started, but now I don’t have to. Now to convince Michaela that camping is fun…… We can use our park pass for these camping trips, so they end up being very affordable.

Rob has a day surgery on Friday, for Carpal Tunnel in one hand–they will do 2 small surgeries, one on his wrist and one on his elbow. This is a problem he’s had for a long time, but the hip issue was more important to fix. So, in preparation, he’s been fixing everything in sight–there’s a new light on the back porch, new mini-blinds in the bathroom since those broke, lots of firewood hauled, and the side-yard project is finished. I can’t even imagine how many projects he would have finished if it was a surgery where he would be down and out for a long time. He is supposed to recover quickly from this one, but I’ll admit, I’m thrilled to have those projects done. I’m also glad he is getting this fixed. They said it’s “severe” and that he will have permanent damage if it isn’t fixed. I believe it, since he keeps dropping things these days–he just can’t feel things like he used to. All the approvals are done, so this will be covered by insurance, which is a nice thing to know.

I got a notice that curbside pickup will resume at our library at last and have an appointment to get the books and movies I ordered months ago, that came into the library, and have been sitting there for the past few weeks while they were closed again for Covid. I no longer can remember what I ordered, so am looking forward to being surprised tomorrow when we get them.

So, I should have a quiet week where I do school, keep the kids, take care of Rob, read and cook eggs. Sounds good to me:)

I’ll leave you with this fossil Patsy found on the beach. I thought it was an especially nice one.