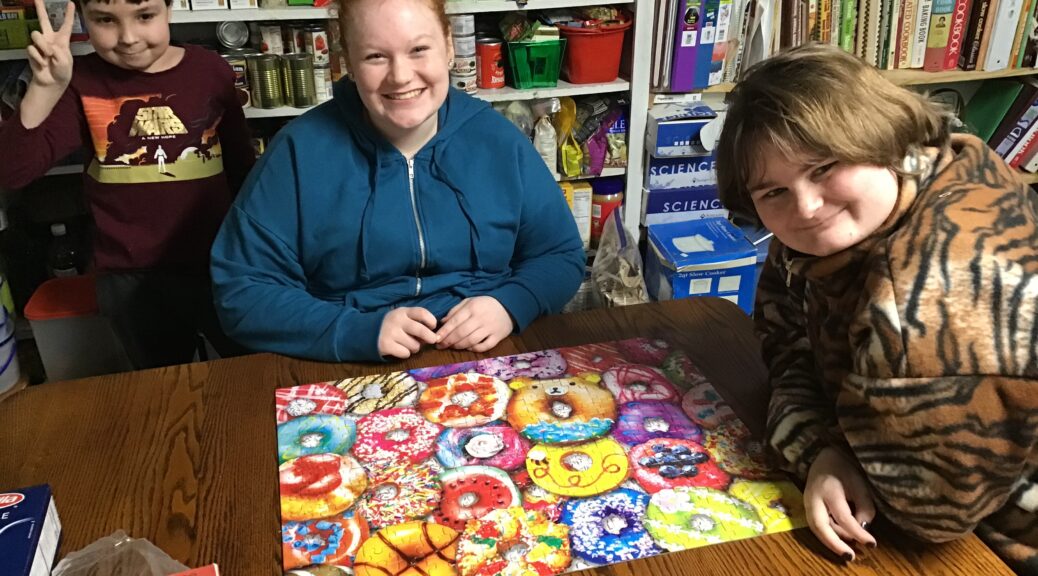 We’ve been enjoying our holiday around here! The kids came over on their usual days, and I did school with Jake on New Year’s Eve as I always do on Thursdays, but then we had our own little party. No one told him there wasn’t school, and he does very well with a routine, so his family got lots and lots of homeschool done this past couple of weeks since there was no distance learning with the public school, of course.

Rob stopped off and got a dozen donuts. We put out a plate full of candy and chips. They did a donut puzzle and I read the story about Homer Price and the Donut Machine. We had a game tournament where there were prizes for first, second, third, fourth, fifth and some prizes “just because.” I played Sorry with the girls, Rob played chess with Jake, then we all played Apples to Apples. Then, we watched “Charlie and the Chocolate Factory.” It was a rousing success of a party, and was over by 4:30. My kind of New Year’s party. I planned to go to bed early.

But……the dog was very disturbed by all the fireworks in the neighborhood and would not let me sleep until about 2:15 am. Poor thing. So I rang in the new year after all:)

Every single year since she was born, Alissa has celebrated her birthday with Rob, as they both have January birthdays. Hers is the 2nd, so we’ve always celebrated hers on or near the actual date. Then Jake joined in the January celebration when he was born. She wanted to continue the celebration. It was a teeny, tiny party compared to some years, but we had a great time. Isn’t that a cute cake their Mama made? Sadly, I dropped the cheesecake upside down while trying to take it out of it’s pan, and it did get a little beat up before Rob rescued it and flipped it over, but it tasted super good….thank goodness for blueberry sauce. It covers many flaws:)

She’s 20. Crazy!!! So, Rob taped 20 pennies, 20 nickels, 20 dimes, 20 quarters and 20 dollar bills together in a long, long strip and put them in a shoebox with a slit in it and she had to pull them all out. He wrapped the box in many, many layers first so she had to get through all that as well. With him and her, it’s all about who can give the silliest present sometimes…..they have fun, and she can certainly find somewhere to spend the money.

Even with our celebrations, we did get a few things done, and did some money-saving activities.

I made 2 kinds of soup and we ate those many times. I made home-made refried beans for the party. I did cook substantial meals a couple of other times, but we just ate lots of soup, leftovers, etc. for the most part. Rob got a cheap Little Caesar’s pizza for him and Patsy to eat New Year’s Eve. I ate an expensive frozen gluten-free one from Costco. That was still way less than buying a gluten-free one from a pizza place. I do make my own at times, but we wanted our own little celebration that night for Patsy.

I received a little spring form pan for Christmas for my Instant Pot. I used every last bit of cream cheese I had experimenting and made 2 little cheesecakes this past week. I used my home-made cherry filling for this one and my blueberry filling for the one I took to the party. It worked very well. It was also good to use the cream cheese, as it had been around for a while.

In the spirit of January, I cleaned quite a bit. One thing I did was sort the Tupperware cupboard. I received a few new containers for Christmas, so I put those in, and got rid of some things without lids, etc. and just got rid of a few things.

I worked several times on my pantry shelves in the garage where I keep my food storage. Patsy helped me one morning. We killed many spiders, wiped up little spills and organized it better. We filled up containers from bulk supplies. I was delighted to not find very many surprises, and that I didn’t have to throw away a lot of things–only one or two things that were hiding behind things. That’s why I go through it a couple of times a year. Sometimes, even though I have the best of intentions, things get put where they don’t belong or I just simply forget to use something, especially if it was given to me and it is not one of my usual items I cook with on a regular basis.

I’ve been holding off on grocery shopping for a while. I made a detailed list for Rob to fill today at Safeway. I was able to use the $10 off $50 coupon, many other coupons I downloaded onto my card, such as cereal for $1/box, milk for $1.99/gallon, eggs for $1.50 for 18, and many other bargains. He had to buy some things that were not on sale as well, but I was thrilled with the amount of groceries he got for what he spent. Now we are set again until the produce he bought gets used up.

They gave out free school lunches a few days over the holidays. We did not go every time, but did get a few of them. Today, they are back to their regular daily schedule, and I took Patsy for one.