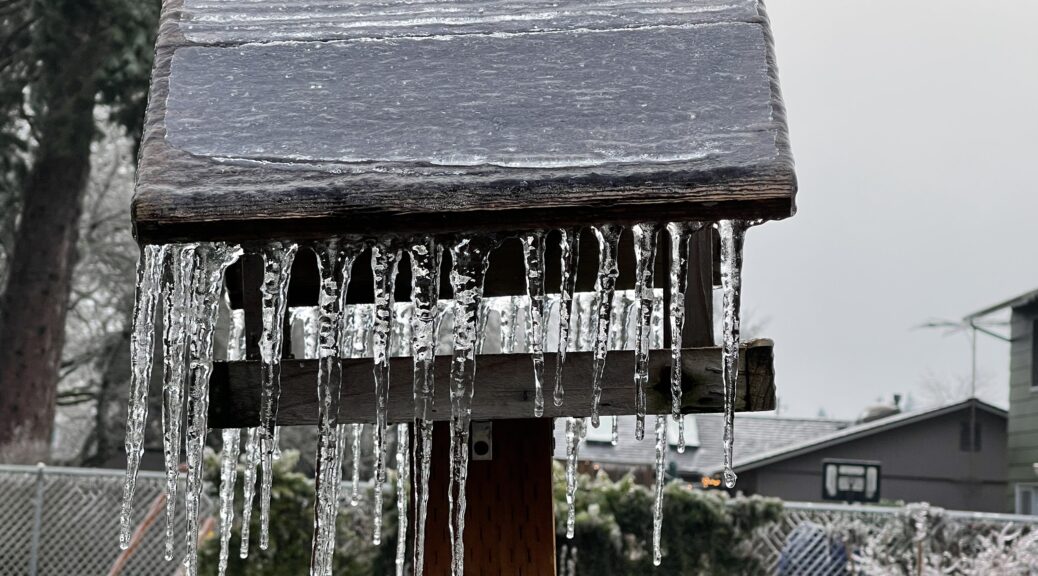 What a week it has been! We are having a “historic” ice storm, as they are calling it on the news. North of us, in Portland, they have inches and inches of snow, plus ice, so my sister who works there had to go to work and stay there. It’s really not safe to drive there. Salem got hit with ice. It hasn’t been super safe here, either.

We had branches with up to an inch of ice on them. Countless trees fell in our neighborhood and power lines were in the road, in yards–broken from the weight of all the ice.

We had quite an adventure when our neighbor knocked on our door late one evening, saying he heard the tree behind both our houses creaking and cracking. Of course, we could not move the shop out of harm’s way, but we tore out there, hooked up the camper and moved it.

Of course, it was raining the whole time–freezing rain to be exact, and our van window was completely iced over with a thick sheet of ice. Since there was no time to de-ice it, what with trying to escape a tree that might be falling, Rob had me get in, and he gave me instructions to drive it back so he could hook up, then he wanted me to pull out of the gate, completely blind, following verbal directions that were being yelled out! After getting dangerously close to the house eves with the camper, I bailed out and let Rob finish the job, with help from both me and the neighbor. Which goes to prove 2 things: 1) My claim that Rob can drive the camper so good he could do it blindfolded is true, and 2) I never, ever will apply for a job as a blind van driver.

The tree never fell, thank goodness, but many branches fell from it. It took until Sunday morning for us to get the area safely cleared and for things to thaw out enough to put the camper back behind the gate where it belongs. We are so glad we cleared out the arborvitae a few weeks ago. More of the top branches fell and Rob had to cut them off before he could put the camper back. There will be a whole street full of full yard debris bins this week, I think! Ours is certainly full. We are very thankful that the camper that was just fixed does not need repairs again!

Family members piled into each others’ houses, wherever there was power. Ours stayed on the entire time, except for very brief outages. Others were not so fortunate. The worst night, there were constant flashes in the sky, thousands and thousands of outages, and numerous problems resulting from these problems. The street right behind us and almost every street near us lost power. All night long, the calm of the night was punctuated with crashes and cracks and falling branches.

Today, we took a walk. We saw at least 15 people cleaning up yards and sawing branches. This was one street that seemed especially hard hit. One man showed us his power line in his yard and said it was colder in the house than outside. Many streets have been closed. Near the end of our walk, we saw a man standing in the middle of the intersection. He was jubilant because his power had came on and stayed for 2 minutes this time–and pointed out power truck and workers a few blocks up a hill. Now and then, we could hear a generator running, or see smoke coming out of a chimney and knew those houses were a little warmer than the others. Everyone had a story, and they all wanted to share it. It was the most interaction we have ever had on a walk.

I find it quite ironic that we have a small generator, camp stoves, an entire camper that runs on propane, cupboards of food, Dutch ovens and a small fire pit in the back yard and yet our power stayed on and we needed none of those things, while others lost their power and had no way to build fires, cook, or be comfortable. We actually felt very sad and a little guilty as we walked along and wished we could help everyone. But, we can’t, so we did what we could.

We absolutely got the best deal and lots of entertainment at our house. Power is still not on in many neighborhoods, including the baby’s, so we still have a full house. Grandpa Rob spent the day today cutting down broken branches, tending to his greenhouse, cuddling with baby, cooking, and doing dishes. He also walked over 3 miles and kept the dog from licking poor Malcolm in the face since she’s decided he is either a puppy or a new toy. Rob looks exhausted. We all feel a bit tired, I will admit!

The baby is now crawling all over. He eats any and all trash he can find, so we have been constantly sweeping. It was especially funny when we caught him chewing on an advertisement for “Clean Eating” magazine! I guess he wants to be healthy:) He’s a lot of fun right now.

I’m thankful tonight that people I love are all right, safe and warm and for the time spent with those who came here. I’m thankful for power, and a huge food storage and all that wood Rob chopped this fall. We had no trouble feeding a few extras, and I just had Rob stop for an extra gallon of milk today while he was out and about helping chop up some branches at my sister’s. He said the store was slammed, with people pushing full carts of water, food that could be easily eaten like lunchmeat and bread, and other items they needed. He said the store looked like it had been wrecked, with food in the aisles, empty shelves in some places, and items displaced all over.

I’m thankful that our house, shop, camper and cars made it through unscathed, but most of all for the safety of our friends and family. I’m looking forward to a calmer week!