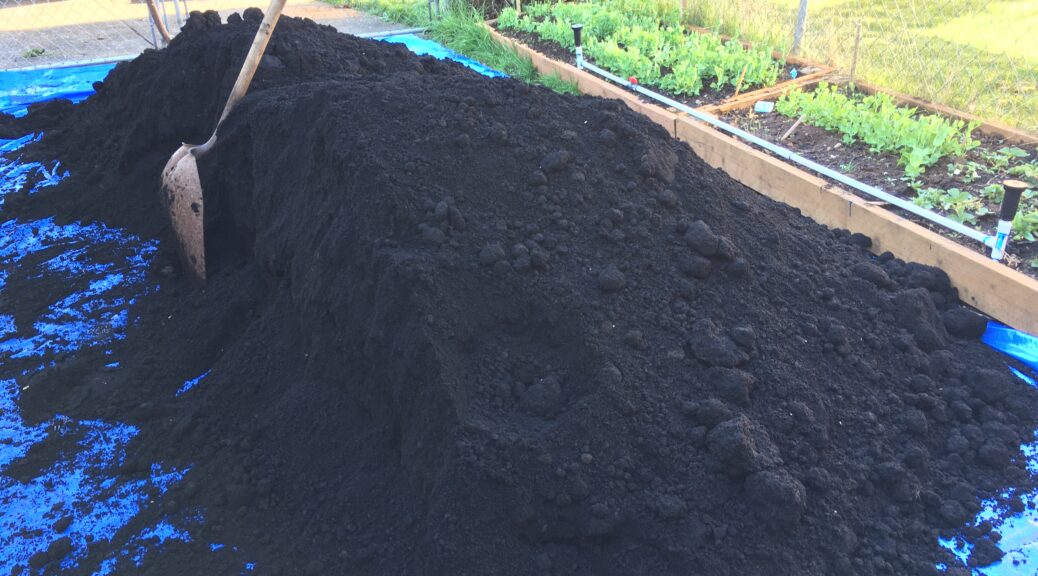 Last week can be summed up with one word: YARDWORK!!!

We had 8 yards of well-rotted mint compost delivered on Friday morning at 7 (Yikes!) and spent Friday and Saturday taking it by the wheelbarrow-load to the garden. You can see the new raised beds in the background. There are peas, snap peas, snow peas, green onions and strawberries growing nicely. The weather has been great, and Rob got the watering system up and running so now they are growing even better between the water and sunshine.

We spent quite a bit of time working on the watering system. A few sprinkler heads needed replacing and there was one evening where Rob was on his stomach in the grass, I was wrist-deep in mud trying to screw the new head in, water was spewing everywhere at one moment, and Jake wanted noodles! Wow! Never a dull moment. Eventually, we got 2 out of 3 replaced and left the other one for another day!

I used an old-fashioned shovel to dig out many, many dandelions and other weeds near the raised beds by the deck and the flowerbed nearby. After I got it cleaned out, I spread a couple of bags of bark chips in the paths to help keep them clear. It helped a lot last year.

We have saved hundreds lately by either doing things ourselves or having Rob fix broken items.

We put steer manure in the flowerbed area where the fig tree used to be. The soil is terrible, but we will improve it over time. I planted out geraniums that Rob either dug up and saved in the greenhouse all winter or started from cuttings. The alyssum, pansies, African daisies and poppies were started from seed in the greenhouse. Some seeds were from seed companies, some from the Dollar Store, and the cuttings were from last years’ plants.

In the area behind the geraniums, including the stump area, tons of zinnia seeds are scattered. Most are old, (25c/quart bag at a yard sale a couple of years ago), so I threw them in there thickly. Straight back on the right, is a snowball bush. We bought it at a yard sale for $5 this weekend. I’ve been wanting one for quite some time, so I was delighted. On the right-hand side are some Hood strawberry plants–just 12. They are June-bearing. I’d like to have a large crop at one time for jam next year. The rest of my berries are overbearing, and I love having berries all summer. We shall see. Without the tree to shade everything and take all the water, I have high hopes for this area.

We all took our nephew to a track meet. They have a very short season, due to Covid, so his parents, Michaela, Rob, myself, Lovana, Patsy and Malcolm went to cheer him on. He has 2 more, and then he’s done. Malcolm’s mom was working that day, so we got to take him to his first ever sporting event:)

We took advantage of the sunshine and had a picnic at the park with Jake, Michaela, Patsy, Malcolm, Ja’Ana, Rob and myself before J had to go to work one day. We took several walks. We cooked a few meals, but did sandwiches, salads, and things like that quite a bit. I finally went to the store today, Tuesday, and stocked up on enough to hopefully last the rest of the month. The last time I went was almost 2 weeks ago, so we were getting low on produce. I also placed an Azure Standard order with the money I’d set aside the last couple of months, to stock up on some cleaning supplies and bulk items. The funniest thing we ordered, for me, was a pound of pepper. Again! I got one about 3 months ago. Really! I’m not kidding–Rob likes pepper (understatement of the year!). It amazed me to see I needed another one so soon, but I did. So, if you ever stop by for dinner…..consider yourself warned!