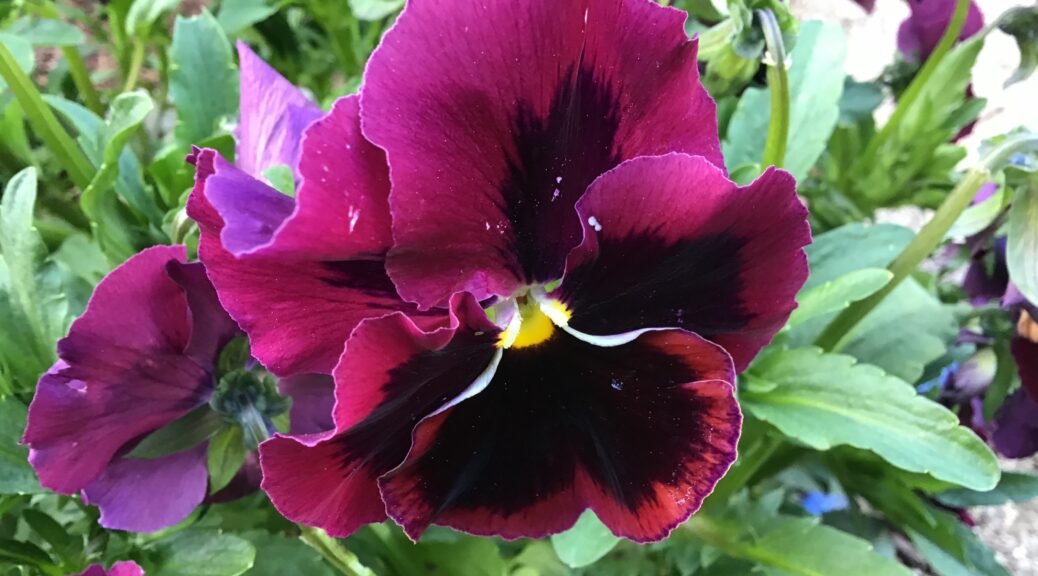 I have a large pansy plant that overwintered in the corner of one of my raised beds. I’m really enjoying it a lot this spring.

The spinach in the raised bed is ready to pick. I picked some that had overwintered in the garden, and these spring-planted ones are next. There are a few snow peas, too, and some artichokes.

We have a bit of a situation going on in regards to our garden. Our big tiller is broken beyond repair and another one is on order. And remains on order. And the store was sent the wrong one. And…..And….And… They say it’s very difficult this year, with Covid, to get things.

We are hoping it gets here by the end of the week. Rob really needs to deeply till the garden. We’ve spread our compost. Leaves and grass clippings have been added weeks ago. We’ve used the tiny tiller to work up a small corner to get a few cabbages, carrots and beets in. We know things won’t grow very well there since we’ve tried doing it like that before. That one is a cultivator, and is for getting a few weeds from the center of the rows, the edges, and maybe roughing up a little area for a second crop of lettuce, and things like that. I’m trying to be patient. I need to try harder. I don’t feel patient one bit:). There are so many lovely plants ready to go out into the garden.

Rob scored big-time this week. He got a pack-and-play, a wagon, and baby gates from a Facebook post. Basically, they said whoever got there first could have the things–don’t call, don’t knock, etc.–just take it from the side of the road. He happened to see the posting 6 minutes after they put it up and it wasn’t far from our home. I made a sheet for it from some flannel I had and now there is a place for the baby to sleep if he needs one here at my house. I still had J’s baby blankets, so put those in there and I’m set.

He also got piles of baby clothes, in various sizes from a garage sale, for a very, very inexpensive price. We sorted them and put them in sizes and will give them to baby when needed. If some never get used, it was still worth the price and we will donate any extra.

We had my niece and nephew all weekend, and Jake and Malcolm shared this sweet moment after church on Sunday. We didn’t do any great, fancy activities with the kids–just stayed close to home, watched movies and t.v., read aloud, took a walk, did school with Jake, and played Safeway Monopoly.

Patsy was given a huge envelope of tickets and she graciously shared with the other kids. When we went to the store to redeem some prizes, the cashiers were extremely generous, so there were lots of tickets to tear open and download into our phones. Over the course of the game, we’ve won lots and lots of water bottles, a large package of toilet paper, some tissues, bread crumbs, vinegar, batteries (although they were out and we didn’t get them yet), waffles, several loaves of French bread, ice cream, a $25 credit on our account, and sour cream. There were a few other things, too. Once we had our $25 credit, they played for the girls, and got them one, too, which was used to buy diapers and baby food. We are thrilled with the prizes, but I will say this year the game takes a lot of time. If I didn’t have such willing helpers, I’m not sure I could find that kind of time in my schedule. But, this year, I’m delighted since I did have so much help and it gave them an activity and me free groceries.

People were hungry this weekend, and I felt like I cooked, washed dishes and went to the store all weekend. Twin pop (popsicles) were the elusive item that was hard to find, but I finally did Sunday afternoon on the third try. Jake was eating so many, and he actually needs both the calories and the liquid, so I try to keep them on hand. The crew ate so many pancakes and syrup they downed an entire container of syrup, so I had to get more of that, too. I love cooking for a crowd, so I was in heaven:)

One of our large upright freezers had a problem. We still don’t know if it is broken, or just got left open. I spent several hours last night sorting and making decisions and re-arranging things amongst the freezers. I pulled out everything that couldn’t ruin in one night like bread, butter, cookies, brownies, nuts, etc. and put them in boxes. Then, I filled all cracks, gaps and spaces with meat, fruits and veggies–things that were most important to me. I spent all day today cooking up things that wouldn’t fit or needed to be used and the few things that did start to thaw. I made pork chili verde, enchilada casseroles from both chicken and pork, mixed fruit crisps, and boiled the 3 remaining packages of beef bones into broth. I’m glad we caught it early. I was able to share some food, and have plenty for us, as well. Best of all, nothing was wasted except a few packages of things that were buried and needed to go away anyway. I’m sure by tomorrow, we will have a better idea of if it’s broken or just got left open on accident. I put all the bread and things in there and a water bottle to see if it freezes.

Of course, we had just gone to Costco and loaded up on a few things like jumbo bags of cheese and a chicken right before it broke. Obviously, Rob had just barbequed an entire roast beef so the little fridge was full. And, the kids and I, appropriately had just won 5 or 6 loaves of French bread from Safeway and they were in there along with all those popsicles… Hmmmm……I wonder sometimes about my timing:) I even had to stuff the camper freezer with some of the important items I really wanted to save, and every fridge I have is full, no matter how small. We will eat well this week!