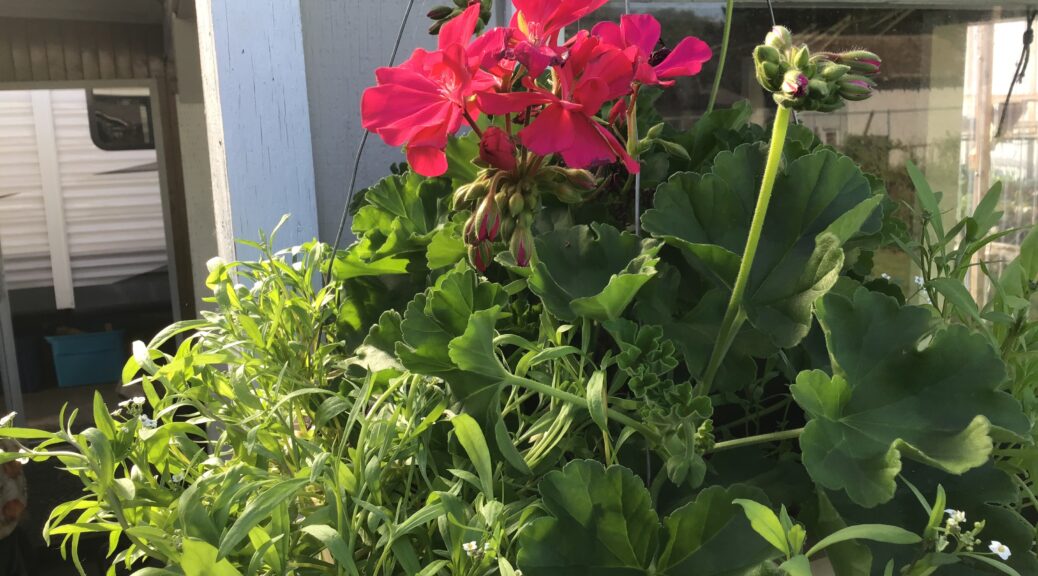 Here is my lovely Mother’s Day basket Rob grew for me in the greenhouse. Each of our mothers got one as well. Grandpa helped our grandson a little with his present selection, by doing some shopping for a very small gift and a card. So did I. I put the one choice on the table and let him crawl toward what he wanted to give his Mama. Not surprisingly, he chose the present I put out, although for moment I thought an empty milk jug in the vicinity might actually win out:).

Much of the week centered around work and a small gathering we decided to have on Mother’s Day. Many significant people, including both of our mothers, had other important places to be, so the numbers were few. That turned out to be a blessing in disguise, as I severely pulled a muscle in my leg while working on the flowerbeds. Rob and Patsy did all the work to get the house ready and Rob did most of the cooking. I sat on the couch and read or watched t.v. while they did those chores. Hmmm…some people will do anything to get out of work….. I say in my defense that I did clean 1/2 the bathroom. Gladly, I’m much, much better now and Rob and I took 2 super short walks today to get that leg back in shape. Tomorrow’s going to be much better yet, I can already tell.

I saved a lot of money sitting on my couch. How, you ask? Well, we made up a menu entirely of food we had on hand, except for some sugar soda Rob picked up. All we use here is diet soda, but some like the regular kind. It was on a very good sale, so that didn’t cost much. Thankfully, I had shopped last weekend for 2 weeks, and my plan payed off. We still have lots of groceries. People also brought things, and that’s always a nice gift to the host! This time, we really appreciated it more than ever.

I did not buy paperwork at the Dollar Store or anywhere else. I used regular silverware, not plastic and my usual glass plates for dessert. I did use a few paper plates I had in the cupboard, but bought no special napkins or anything for the occasion. I put fabric placemats here and there on t.v. trays and on the table for people to use, so did not buy a paper or plastic tablecloth. I put basil plants Rob grew in the center of the table for a centerpiece with the intention of giving them away after the party, so did not buy flowers or any other decorations.

I did not go to JoAnn’s as planned to buy new patterns on the pattern sale. Because I was not there, I bought nothing else, either. Because I’ve not chosen to go often during the pandemic, I do buy things when I’m there and can find something I like. There will be other chances to go to JoAnn’s, and other pattern sales, even though my phone is constantly telling me “It’s you LAST chance to get a good deal at JoAnn’s!” I have so many projects to work on, I’m not worried.

We also spent extra money when I sat on the couch. For one meal, Rob ordered me some gluten-free pizza from Dominos. Yum, yum, yum. If it didn’t hurt so much, I would definitely think it was worth doing it again…..but….it did hurt, and I got very bored sitting down, so I’m not planning on it.

I sent artichokes home with my oldest daughter. I said anyone who wanted some could pick some, so she did. She picked some for us to eat as well.

I picked lettuce a couple of times already and have more getting ready. I was able to re-use the nets from last year to keep the birds off.

The Little White Snowpeas are blooming and the Maestro peas on the left are about to bloom. In the back the Sugar Snap Peas are climbing the fence, as they should. Since we can’t till properly, as the new tiller is still delayed, I’m so thankful for the new raised beds Rob built last fall.

My aunt kindly texted me that there were eggs for 98c/dozen at her local Waremart (like Winco). Rob needed to run over there anyway for another reason, and, since I didn’t have as many eggs as I thought I did, he stopped to get me some and SCORED!!!!! Around here, jar lids are still very scarce. But, now we have enough to add to what he’s purchased here and there to finish up what we need for this upcoming canning season and so do the rest of my sisters and my mom, as some of these are for them. He just couldn’t believe it when buying a whole case was an option. He couldn’t believe there were any at all, much less that many! He has checked over and over in basically every store he has entered for any reason, and also on line. (Yes, there are some there, but we refuse to pay outrageous prices like $9/box, or other equally ridiculous prices.)

Now, if that elusive jar lid super sales comes along, I may buy extra to have a backlog, but for now, I’m super happy with what we have. The people he’s talked to where we often buy lids told him they got some, quickly sold them, and have no idea when, or IF, they are ever getting more. And, there are limits on how many a person can buy posted on the shelves when they are found in this area. We are not jar lid hoarders, but it is a fact that I canned over 1,000 jars last summer and that’s a lot of boxes of lids. I’m also a jar lid snob and only want Ball or Kerr. I’ve had some bad experiences with other brands and it’s just too much work for me to risk repeating those experiences. This year, I probably don’t need to do quite so many as I tried to can a few extra of each item last year, but we hit some items pretty hard this past winter. Good thing I love canning and gardening.

The other thing Rob and I did last summer was dry more items. We plan to do even more of that this year, as we found uses for most of what we dried. There’s just no point in growing such a large garden to preserve if I can’t find supplies to do just that and a way to use what I preserve. If they don’t like it, they won’t eat it. Plain and simple, sad, but true, and any other cliche you have heard. They are all true around here:)

Are any of you having success finding lids where you live?