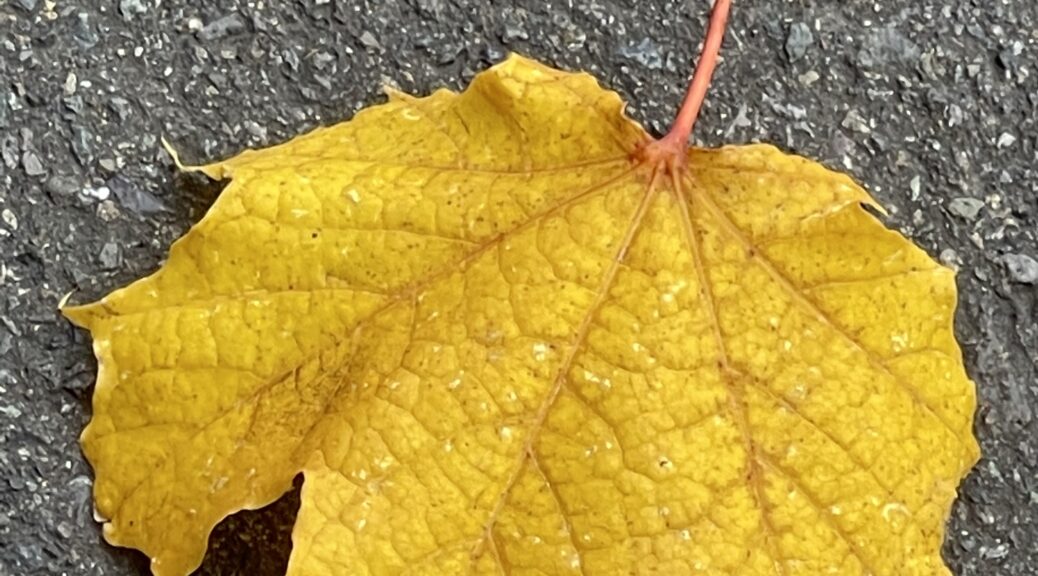 Fall has really arrived. We are enjoying the colors we see in the trees and bushes as we go on our frequent walks. We’ve had a little rain now and then and there is quite a bit expected in the next week. Of course this means that we are frantically trying to get the fall chores done outside.

I spent quite a bit of time on my front yard this past week. Sadly, it was in pretty bad shape. It looks better, but there’s still a lot to be done. I dug up some calla lily bulbs that were taking over a section of the flowerbed. They were even growing through the bushes. I pulled spent flowers and planted a few pansies. I planted some Canna Lily bulbs a friend gave us and divided and moved some irises. I removed some tulip bulbs that were too close to the edge of the flowerbed and re-planted them. I’m hoping these changes will make things easier in the long run as I fill the beds with more perennials.

I’ve been picking little bits of this and that from the garden. There’s not a lot left, but we are eating what there is. Rob put a dryer of tomatoes on. I just haven’t gotten it done and we did use the ones we dried last summer. We had our first frost earlier this week, but it wasn’t severe. Many bushes are still alive, but growing very slowly with the cold nights. Veggies that do finally mature rot or mold quickly. The garden is clearly almost done. There are still a few flowers left, so I happily picked some today.

I didn’t need much from the store this week, so used my grocery money on things to fill holes in my pantry. I got Progresso clam chowder for 99c/can. It is gluten-free, and makes a handy lunch on busy days. This is the second time they’ve had that extremely good sale this fall, so I have purchased over 30 cans in all. That is more than I bought last year, as we ran out and didn’t find them on sale again. Instead, the same cans were between $2.50 and $2.79 when I did find them, and I left them at the store:). I got a few more items as well, along with a little fresh produce and dairy.

We did have to go to 2 Safeway stores, a Dollar Tree and a Fred Meyer store to get what we needed and we spent less than $50 all together. The empty section of shelves seem to be quite random, according to which store we were in. The Dollar Tree was the worst, Rob said. Thankfully we only needed a couple of things from there and we were fortunate enough to find them.

We had a missions conference at our church Saturday and Sunday. I haven’t attended anything like that for so long, I think I appreciated the opportunity even more than I would have before. On Saturday, a young couple we know came home with us for lunch on the spur of the moment. Rob slapped together some peanut butter sandwiches and some others made from some of our home-canned tuna. I warmed up the soup I had made a couple of days earlier and added the carton I had frozen for the future. I popped open a jar of home-canned peaches and we had lunch in a hurry, since we had to go back for the afternoon session. I was so glad I had so much “fast food” in my cupboard so we could enjoy our time with them. I really loved the fact that they brought their baby and toddler over with them. You know I love babies:). It was nice to be able to save both families the cost of eating out, as well.

Jake spent several days and a couple of nights at our house this week. We had a “party” one evening. It involved some treats to eat, a movie of his choice, and some fun. My sister came over that day and played games with him endlessly (thank you sis! It’s a true sign of love for our nephew to play Clue…and more than once!!!). We also enjoyed the babies that day. It was a pretty chaotic day, and lots and lots of fun. At one point, we popped Malcolm into his stroller and left Rob in charge of the chaos at home and took off and pushed him down the street for a couple of miles. Everyone was happy. (In this picture, Patsy has wrapped him up tightly, like a burrito, with a blanket and surrounded him with cats, books, pillows, etc……..they were having a great time just goofing around.)

After a week of being busy every single day, I was so happy to stay home today and really clean up my extremely messy house. I swept up an amazing pile of dirt and dog hair, mopped away what felt like an acre of dirt from the floors, dusted, cleaned that much-used bathroom (we only have one and there were a LOT of people through this house this week!) and even cleaned SO MUCH dirt off the the ceiling fan over the table.

This evening, I’m just sitting and basking in the cleanliness while it lasts. Which won’t be long. Just sayin’. But it’s nice tonight, and alway nice to know it’s “clean underneath” no matter who comes to call, throw toys or track mud tomorrow.