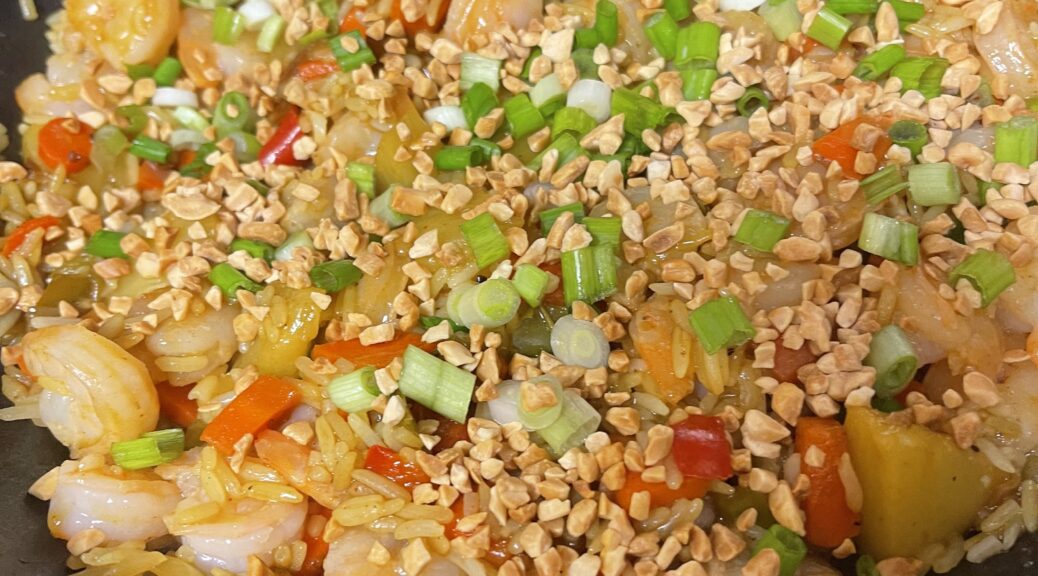 This past week was very laid-back around here. We played with babies. We slept in a lot. We cooked whatever we felt like eating…..or didn’t cook–just ate odds and ends. We had snow several days, which is uncommon around here, so we hibernated. We only had our niece and nephew with us for one day, and Patsy spent a couple of nights with her cousins. Ahhhh……

But, we did manage to do a few money-saving activities in-between all the laying around!

I canned up the rest of the pineapple we had purchased on sale for either 99c or $1.50 around Christmas. Two stores had them, and the sale went on for a couple of weeks, so in the end, I was able to get 8, buying the limit at various places. I have over 20 jars canned, mostly 1/2 pints, but there are a few pints in the mix as well.

Along with all the little jars, we ate fresh pineapple several times, and I made pineapple stir-fried rice for the second time. I’ve done it with both shrimp and chicken now, and it’s great!

We got some great bargains at the grocery store. We bought 97c/doz. eggs, 2-lbs shredded cheese for $4.97, used a $10/off $50 coupon, and got lots of produce. Our daughter went with Rob to buy a few sale groceries at one store and paid for it. She said, “well, we eat over there all the time,” which is true, but he was still pleasantly surprised.

A couple of weeks ago, I was blessed when I stumbled upon a situation where I could get both my Covid booster and my flu shot at Safeway, plus 10% off my groceries. I was buying quite a few groceries, and saved a lot! I already had many coupons electronically clipped to my account, was able to get the shrimp I purchased for 1/2 price, and bought lots of sale items anyway, so the additional amount off was a nice bonus. I had recently returned from vacation, so was out of many things. I had been putting in some work trying to find a place to get both of those shots, so was very fortunate in being able to do a walk-in on the very day I was shopping for a larger-than-normal amount of groceries:). Later, when Rob tried to get his shots (more than once) he was told there was no availability for that and wouldn’t be for quite some time. He both called and just showed up, to no avail. A few days later, he found a drive-thru clinic for the Covid shot, but still has to find a flu shot.

We had a big family birthday party on Saturday. We celebrated 3 January birthdays and one February birthday. We had a Mexican feast. Everyone brought different things. Rob made carne asada for the first time. It came out great!

I made pork verde. I used my home-canned salsa verde and cooked it in the crock pot until it was very tender.

I’ve been trying out the new air-fryer I got for Christmas. I used my Instant Pot and my Crock Pot several times this past week. When I have extra time, I love to use my appliances so I have quick and easy recipes in my mind that I can make when I’m busy.

We saved the most money of all by the choice of pony my sister chose to give the boys. Right now, baby brother is too young for horses, so Mac took it over. The feed and hay bills are non-existent, and stable fees are very low. Riding lessons were free, compliments of Grandma, and he can already ride better than she can, which was pretty easy to accomplish. We didn’t even have to buy a horse trailer, as he fits into the back of the car, since horsey had to go back to auntie’s house for the birthday party and then over here for several hours yesterday!

We also had hours of free entertainment watching “The Wiggles.” One daughter pays for Netflix for Rob every year as his Christmas gift, so it is truly free for us. We watched it over and over and over and over and over……When I tried to put on a different show, he just turned his head away, went and got the remote and fussed at me until I got the message:) (The Wiggles are an Australian group that sings and dances for preschoolers–good exercise and a little learning is involved, but mostly nursery-rhyme type songs. It’s really not so bad–it’s just that we have seen all the episodes multiple times…..)

There are several things I typically do in January. First, I often clean things. I’ve already been doing small bits of deep cleaning, so I have a good start on that. Second, I tend to eat more healthy and exercise more. I’ve already been using up the holiday desserts and not replacing them, and so forth. The rain has been extremely heavy and we’ve had snow, so it’s only been the past few days that we’ve gotten walks of any length. Third, I try to save money. I tend to use up pantry and home-preserved items even more than usual. I’m on board to do all that this year, as well.

The other thing Rob and I have been doing is taking a small plastic bag with us on our frequent walks. We have been picking up cans and bottles. It’s been amazing how many we’ve found since we started picking them up. Bottle Drop will even take cans that have been ran over and are totally flat, as long as they are not 1/2 gone. Who knew? Today, when Rob returned all of our personal cans and bottles, he received $1.10 just in smashed cans, and easily over $5 worth that we had just picked up alongside the road. Better yet, one day, I found a dollar bill laying on the ground, and occasionally we have found coins.

The year’s off to a great money-saving start already!