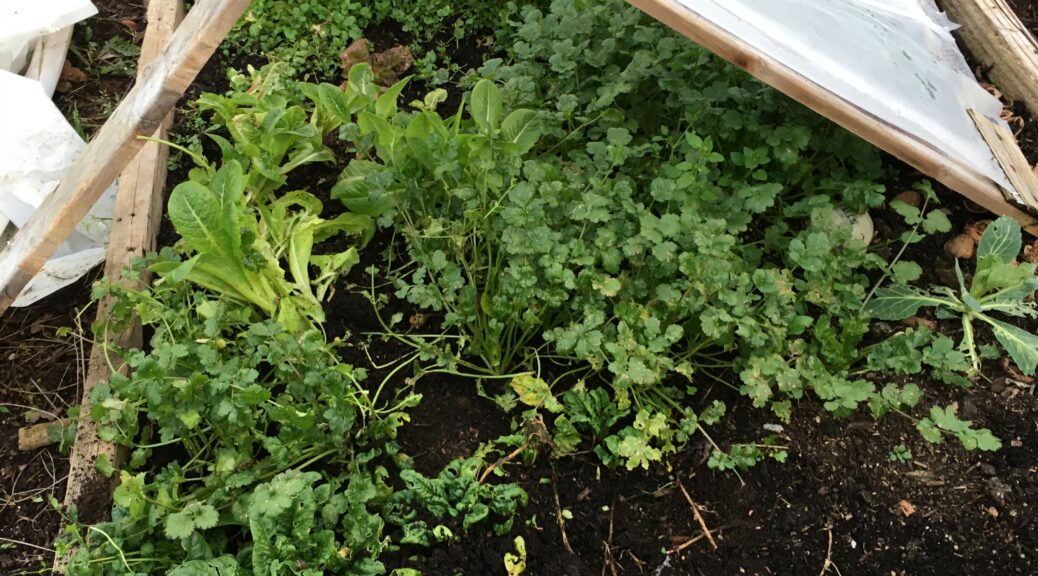 We had some nice weather this week. I took the opportunity to work outside a couple of times. I weeded out the overwintered raised bed and planted a few snow peas in the blank spot. The spinach, winter lettuce and cilantro will soon start growing. There are a couple of cabbages you can’t see that should start growing and heading up and some kale down at the end. I cleaned out and planted another bed with shelling peas. We’ve eaten about half of the ones that I grew and froze last summer.

Rob’s little sprouts are growing like crazy in the greenhouse.

We filled the debris bin with clippings. I mowed the lawn for the first time since last fall.

I was given most of a bag of potatoes that my aunt couldn’t get through before they went bad. I made cheesy potato soup, which turned out comforting and tasty. Rob made mashed potatoes and gravy to go with a pork roast cooked with home-canned salsa verde. It was surprisingly zippy gravy, since it was made from the drippings of the salsa verde pork, but it was actually delicious. We still have more potatoes left in the bag and I will target them this week.

I used some frozen buckwheat noodles I had saved from the last meal before we left on vacation in December with home-canned pasta sauce and some cottage cheese to make a vegetarian spaghetti pie.

I baked a cherry crisp with some home-canned pie filling. I also roasted a chicken. I made chili with some of the beans I cooked and froze a couple of weeks ago with the addition of a garden onion and home-canned tomatoes. My onions are keeping well so far and there are still quite a few left from last summer’s garden.

It was a week for parties and visitors. We celebrated one of our son’s birthdays with chocolate and vanilla cupcakes, hamburgers and chips. Rob watched the Super Bowl with Malcolm and Patsy, although he was left watching alone before long:). I made brownies, as is our tradition during football games. This has been going on since our boys moved in at ages 3 and 5, over 25 years ago. Whether or not football is a favorite, brownies always are.

Jake spent most of the week at our house, as his Mom had an extra busy work week. My aunt came one day and helped watch the babies for J. She’s still working nights, and it’s rough. Another day, my Mom came and played games with Patsy and Jake, which they loved.

I continued to do extra school with Patsy on several occasions and assigned her extra to do alone when I wasn’t available to work with her.

We didn’t buy many groceries this week, on purpose. I was too busy to shop, so planned ahead and bought extra last week. I did have a reward coupon show up on my Safeway app to download $20 off of $20, expiring tomorrow, so had Rob stop off there and spend it. There were a few little items we needed and he bought 2 –$1.97 12-packs of soda pop, extra salad dressing we will save for a couple of weeks until it’s needed, some salmon, and a few other things and only had to pay $12. Saturday morning, we had errands, so stopped at Grocery Outlet and grabbed a few things, using a $5 off coupon. I bought a few things for lunch, and we popped them into a cooler we took so we could finish our errands without having to buy lunch out.

We have had broken tillers for 2 years now. We had to pay to have the garden tilled last year, many places Rob wanted tilled sat untilled all summer, and we were unable to either get ours fixed or get a new one. This week the problems were both resolved. We finally got our old tiller repaired. After being unable to purchase one (we had one on order for over a year–Covid issues they said) or being unable to find anyone to fix our tillers for various reasons, we are more than happy. The man who tilled for us last year gave Rob a great tip for a repair man out in the country and he had time to fix ours! We also got an used one (medium-sized) for a better price than getting that broken one fixed and it’s in excellent condition. Now we just need to deal with the tiny tiller, which is also struggling. We’ve been married almost 40 years. We understand that things don’t last forever, but it’s been much harder to fix our problems than we ever thought. Rob has spent hours and hours on this project, making phone call after phone call and researching options for 2 years. What a relief to have this problem resolved at last!The medium-sized tiller has been broken for quite some time.

I can handle that one and the tiny tiller much easier than any larger ones, and I plan to till and till once the weather gets better. I simply cannot hand-weed and dig everything that needs doing around here. Ya think?

For Valentine’s Day, Rob got take-out Chinese food for us. Yum, yum, yum! Otherwise, we decided not to buy gifts for each other this year.

We watched the Olympics, read library books and took walks all week long.

It’s been a productive week. This one is a little easier, but still full of fun!