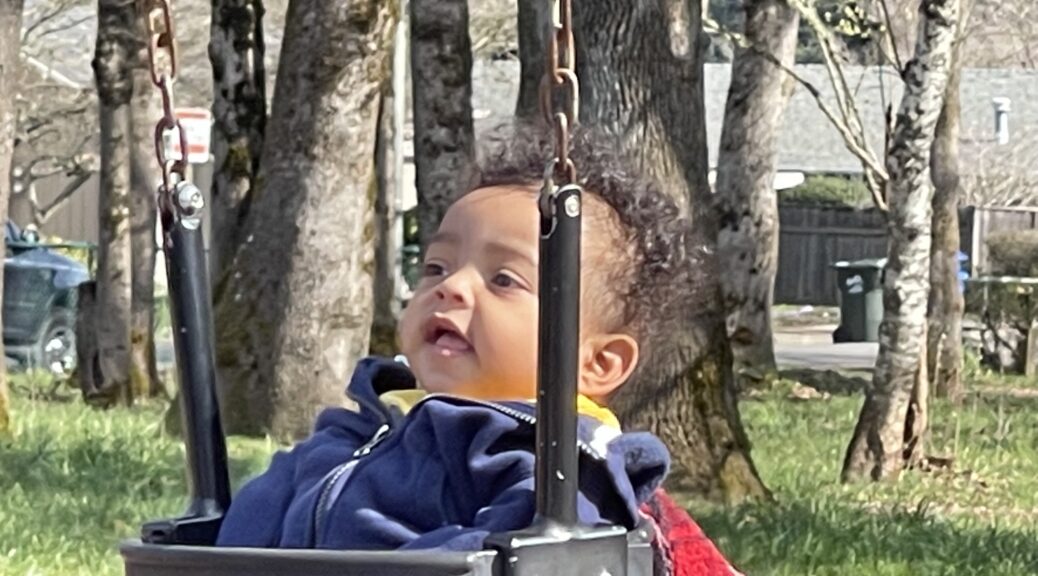 It’s been a week of soup, again! Besides keeping my grocery budget down, it’s just plain good food for this time of year. After some very cold, sunny days, we are in a period of rain, rain, rain!

We finished the beef-vegetable soup, and I made both chicken with rice noodles and potato soup. I may have actually made a little too much soup:). We had tacos a few times, made with home-made, frozen re-fried beans and hamburger. We made a very small pork roast with salsa verde on it. Rob’s mom gave us 4 or 5 avocados when he stopped in to visit her, so we had those several times as they ripened. I also made a ground turkey stroganoff with noodles, which was enjoyed several times. I don’t eat a lot of noodles, but they sure go down well when the baby comes over and I enjoy a few with him when I make them. I shopped a week and a half ago, and it’s working out fine–we are into the second week and have plenty of choices left. Of course, I used, and will use, lots of frozen and canned food from my pantry.

I skipped the Azure Standard order this month, as I had plenty, but instead sent Rob down to Costco for a few bulk items. The girls also went to Costco and gave me some bits and pieces of veggies that came in such large quantities they didn’t feel they would eat them all. Nice! I had Rob grab a chicken, as I often do, and we ate and froze chicken, boiled the bones and made broth, and froze most of it for another soup-making session later on. $5 for an already cooked chicken is such a bargain.

I was delighted to get outside a couple of times. We pulled a few weeds, planted a couple clumps of red tulips someone left for free beside the road, and got the tiny tiller out and roughed up the big flowerbed out front. After the amount of rain we just received, I know that’s the last flowerbed work I will be able to do for a while, until it dries out again. The lawn was mowed as well, so things look better around here.

Rob used some money he was given for his birthday to pick up some jumbo bags of dahlias at Costco. We also have quite a few bulbs he dug up last fall, both from some we had planted in the corner of the garden and some a friend gave us last summer. We have a couple of areas we plan to fill with dahlias. It’s too early to plant them yet. The hope is that once they are established, and mulched, they will be less work than the gazillions of zinnias I planted last summer! I wasn’t able to hand-weed them enough, so they got pretty weedy by the end of the summer. Gorgeous, but a bit of a mess.

It was a week of visitors. I had Jake (my nephew) all week. For you new readers, we work with him and his sister for our job, and spend some auntie and uncle time, as well. His mom was working 12 hour days, multiple days. His dad was working a lot, as well. So he just spent the days and nights all week. His sister came one day, only, as she is enrolled in a program most days. We had the grand-babies a few days. By Friday, I was delighted to hear that my mom was coming over. She played games, held Mac, and helped eat up some of that never-ending soup while we visited. It was good to break up the fun with a new person. This is her trying to play Clue with Patsy and Jake while keeping Malcolm busy with lots of odds and ends in a basket–no wonder I can multi-task well:). I come by it naturally!

Rob took Jake to the library one day, Michaela to Bottle Drop to recycle her family’s cans and bottles, Jake out for errands and donuts and Michaela to Costco for a hot dog and her Horses of Hope lesson. I stayed home with Patsy and did school, school, school, babysat and did school with Jake. I also read aloud to him for hours, as he loves that. Right now, we are reading Trixie Belden, book 1, yet again. He loves that book. It’s a good thing that I enjoy it, too, as this has to be our 3rd or 4th time through.

You can imagine that I loved having the company I got, and I was ready for a little visiting! All those errands and activities kept the kids busy, and that helps me keep sane.

I am happy to report that Patsy is almost finished with school. Tomorrow should do it, except for a couple of very small things. Now she will be able to have a few days to do a few things she needs and wants to do to finish preparing for going off to camp to work a week from Tuesday. It’s been 7 days a week, often many hours per day, of contact school for a few weeks, ever since we found out they wanted her early to help with outdoor schools, so it will be SO good to be done with that huge project!

My niece, Alissa, came over one day just to hang out. If you are a new reader, this is the niece that I homeschooled for several years, so I miss her a lot now that she’s grown up and working. Another evening, another couple of nieces dropped by and of course, I loved seeing them, as well. I’ve just had a great “auntie” week.

We took the babies and Jake to the park. We take as many walks as we can, whenever the weather allows us to. Even when it’s raining, we take umbrellas and go. It’s only when it’s very cold or the rain is driving sideways that we stay in with the kids the whole time.

It was a great, but super busy week. My life goes that way–I’m busier in spurts, and I’ll admit I got somewhat tired this week. It turned out to be a lot, but filled with such precious people and memories. This next week will be lighter. That’s good because I have one daughter I’d like to spoil a bit before she takes off to camp…..