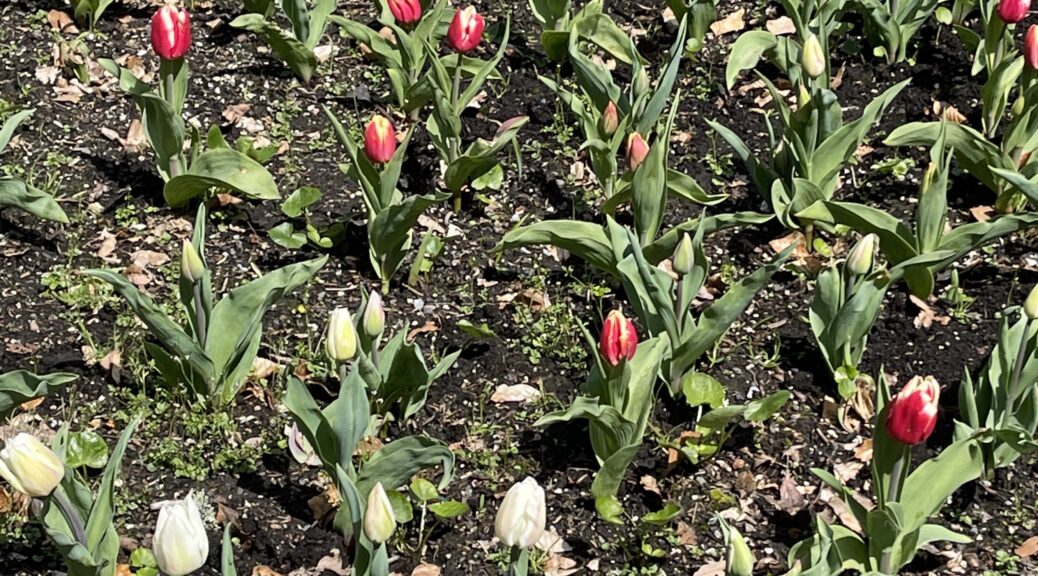 Rob and I were able to take a couple of interesting walks this week. One was to Bush Pasture Park. This house is a museum, which I have never toured, but we really enjoyed the flowers today.

There were hundreds of tulips blooming in different areas.

In a different area of the park, there are large areas of Camas Bulbs. The Native American people who lived in our area used to dig them up and eat the bulbs.

There were other gorgeous wild flowers blooming, as well.

We walked a little over a mile there, and had a great time. The weather could not make up it’s mind. First, there would be sunshine and blue sky. It felt like 2 minutes later, there was strong wind and a heavy rain shower. Crazy!

It’s a good thing I took my heavy coat and my garage sale find–a $2 umbrella. The wind was so strong it blew my hair back severely and almost turned my “new” umbrella inside out. Invigorating, to be sure!

We were able to get a few flowerpots at the same garage sale. We also got baby books for 25c/each and a couple of flannel shirts for $1/each. We only stopped at the one sale, as we were on our way somewhere, but were pleased at our finds.

Rob was the chauffeur for my aunt and I, and drove us up and down the valley on a quilt shop hop. It’s the first one I’ve heard up since before Covid, so it was fun to go to 6 shops in one day and just look at all the goodies they had. At every shop, they gave us a free kit for a block to make up at home. We did the other 2 shops the next day, making a total of 8 visited in two days. We saved the ones near to home for last so they were easy for me to stop at on Saturday.

We had a lovely picnic lunch during our day out, and the weather was warm and sunny. We stopped in a little park with only one picnic table, but the solitary woman eating her first picnic of the season was cheerful and willing to share the table with us. It was really fun to get out.

Now I have 8 blocks to sew up. It feels a little like backward progress on my use-it-up project, but it was a very fun day and will be fun to have a new project.

I’ve been choosing areas and cleaning them out. I worked on the garage a little this week, but there’s lots of stuff left to go through out there. I’ve been sorting and organizing quilting fabric and unfinished projects during that project in a different room. Although I have so very many places left to clean and so very, very many projects to finish from over the years, I have been making progress.

I finished the baby/toddler quilt that used fabric purchased years ago, along with scraps from other projects. I went down to my local quilt shop to buy a backing piece and turned it in to be machine quilted. I’m kicking myself because I forgot to take a picture before I did that. I was so excited to have finished another project. I’ll post one once it comes back.

We spent quite a bit of time studying and preparing for our 5th grade Sunday school lesson. Each weeks gets easier as we adjust to the curriculum, which is set up very differently than any we have used in the past. One thing that is different is that it’s all on-line. This time there were slides that you could download onto a memory stick from one place onto our Chromebook and then fasten the Chromebook up to the tv in the classroom and show pictures/slides that went with the lesson during class. Um-huh. Right. Uhhhhh…..We figured out how to download it all from the web to our memory stick to the Chromebook, but had no idea which cord plugged in where…..

We are learning fast. You could say Rob got a free class from one of the patient pastors after he made an appointment and just went down there to figure out where each cord was supposed to attach. We didn’t want to figure it out Sunday morning. I guess the kids hadn’t had that option very many times because they were very excited to get to see something up on the tv, but not nearly as excited as we were when Rob got something to show up on the tv….. I got the easy part this week. I taught the Bible lesson, read off the review questions and kept score during the games. And ate chocolate. We actually team teach, so we decide ahead of time who does which part, and we each spend some time talking during class.

This was one of my favorite parts of class this week. Rob held the 2 Hula Hoops while the kids threw paper airplanes at him. If they got it through the hoops, they could choose the review question to answer. If they missed, Rob chose. It was Rob vs. the TEAM, and the TEAM won! Everyone had a blast, especially when one kid nailed him right between the eyes with the plane, in the stomach, and even in the sink. (He was not hurt in the slightest). Rob, being Rob, let everyone who made a spectacular hit of any kind choose the number of the question to answer. There were 42. We didn’t get quite all of them done, but had fun trying! They even got a lot of answers right, which we can take absolutely no credit for as we just started, but their previous teacher obviously taught the material well, or they are all geniuses, or maybe both:)

We also practiced the memory verse while passing a chocolate egg down the line with a plastic spoon, behind their backs, under their legs, with their left hands, etc. Then we ate chocolate. It’s turning out to be a lot of fun. They are a great bunch of kids and turning out to be delightful to work with. We have had about 9 or 10 each time, so far, so it’s a nice sized group.

I made a big batch of spaghetti sauce, using my home-canned tomatoes/tomato sauce, plus lots of onions. They have kept well. This is April, after all. But the red ones are wanting to grow, so it’s a race to use as many as I can and freeze a few now and then for later. I also made chicken soup, biscuits, and sweet and sour pork. I cooked brown rice in the Instant Pot and froze some for quick meals later one. We had pork roast meat, also, on salads and for meals. I thawed squash and corn, and cooked green beans.

Patsy came home for the weekend and I had her choose senior picture options from the 273 ones her Dad took. We will order some announcements and get some printed up from her choices very soon, along with some prints for the relatives. We picked her up Friday evening and took her back Sunday evening, so enjoyed a couple of pleasant country drives.