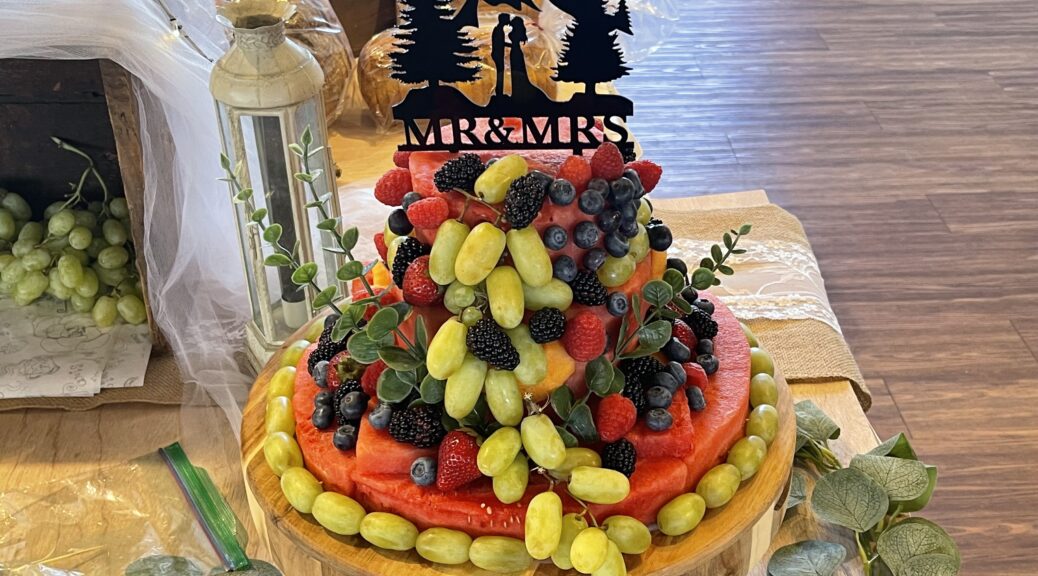 The wedding was beautiful! My sister’s watermelon cake impressed everybody, especially me:). Because my sister and I (and our husbands) were in charge of the reception, this post will focus on much of those details.

The old ladders Rob sourced from friends’ basements transformed into an amazing decoration for their cookie bar. I think many people were worried that there were not going to be enough cookies, so they brought extra, including my oldest daughter, who made dozens and dozens. There were plenty for the event and many to spare. Perfect!

People were greeted with the lighted sign on the fence, a guest table, a banner and a table for gifts. We didn’t decorate most of those areas and sadly, we didn’t get pictures.

Early in the morning before the wedding, I picked all of these dahlias and zinnias in the colors I was using, plunged them into water immediately, and then arranged them the night before. Any that were wilted or sad looking by evening were tossed and I used the good ones. The flowers easily lasted through the wedding that way. I made 2 large arrangements in baskets and then used up the extra blooms in vases and canning jars tied with tulle to math the decor. We just put those here and there when we decorated. I took a bucket full of extras to the venue to use for filling the vases on the fences and the ladder with the silverware. Mums were purchased to fill out the decor.

After the tablecloths and skirts were put on the tables, thin laminate was placed over them to give the look of wood to the buffet. The buffet was set up in duplicate, so people could go down both sides. Rob’s utensil caddy, on another rickety ladder, worked very well. We put dahlia bouquets here and there, and I used the small ones for this piece.

Several of us had chopped and cut and made garnishes the afternoon before the wedding. The dips were made as well, and the yogurt-spinach one needed cups and cups of finely chopped fresh herbs and 14 bunches of green onions, sliced thinly….as you can imagine, it took some time. The cheese one was delicious, as well, but not quite so time consuming. The hummus was the easiest, as it was purchased and just decorated on the top.

The fruit could not be cut until the morning of the wedding, and we had a couple of champions fruit cutters who chopped for hours. Literally. They sliced oranges to line the bowl, and had a huge container of salad for refills.

Rob’s meat was done ahead. He did it all in various marinades and smoked it slowly on his Green Mountain Grill. We sliced for 3 hours, even with a borrowed slicer, and there was plenty.

The galvanized tubs held salad mix on the bottom piled high with toppings in a mountain on top. It got mixed as they took it. Toppings were in the jars and dressings on the pitchers. The veggies were placed in baskets and tipped over onto fancy waxed paper.

Everything was labeled with it’s name, and if it was gluten free, dairy free, nut free, which were the 3 allergens my niece wanted labeled.

Fancy cheeses were sliced and decorated with cheese hearts. I’m not sure if you can tell that the “roses” were carved from strawberries! My sister has a touch with garnishes. There are even little hearts made from fruit on top of the fruit salad. So cute!

Assorted breads were near the end of the buffet line and there were condiments in case anyone wanted to make a sandwich.

There were 4 tables in a block with one additional table turned the other direction on the very end. That’s where the watermelon cake, other fruit, the tangerine tree and various fruit were.

We were asked by the bride and groom to incorporate tangerines in the buffet, so my sister figured out how to make this tree. I’m so glad she found a better way to showcase them than throwing them down the table:).

We did have some mozzarella/tomato/basil/basalmic appetizers and they were a big hit.

The kids’ table came out super cute. We used a board across the barrels and all kind of kid (and adult) friendly goodies were added. There were goldfish crackers, fruit by the foot, fruit, pretzels, many kinds of candy, heart-shaped marshmallows, and more. There were wedding-themed M and M’s, layered with blue ones to match the decor.

Kids loved it! (You may notice Malcolm’s mouth is stuffed with candy, but he’s going back for more). Adults loved it, too.

The wedding went off without a hitch. It was a lovely ceremony.

The sweetheart table! Rob couldn’t help teasing them a little and had them “practice” kissing, which is why they are laughing:). We all toasted them with peach sparkling cider, which was carried to each table.

….And they were off to their honeymoon, tired, but happy!

We cleaned up, went home and collapsed into heaps;).

We could not have done this big of a production without a lot of help. Thank you so much to each and every one of you who had a part in this huge endeavor. Together, we pulled it off!