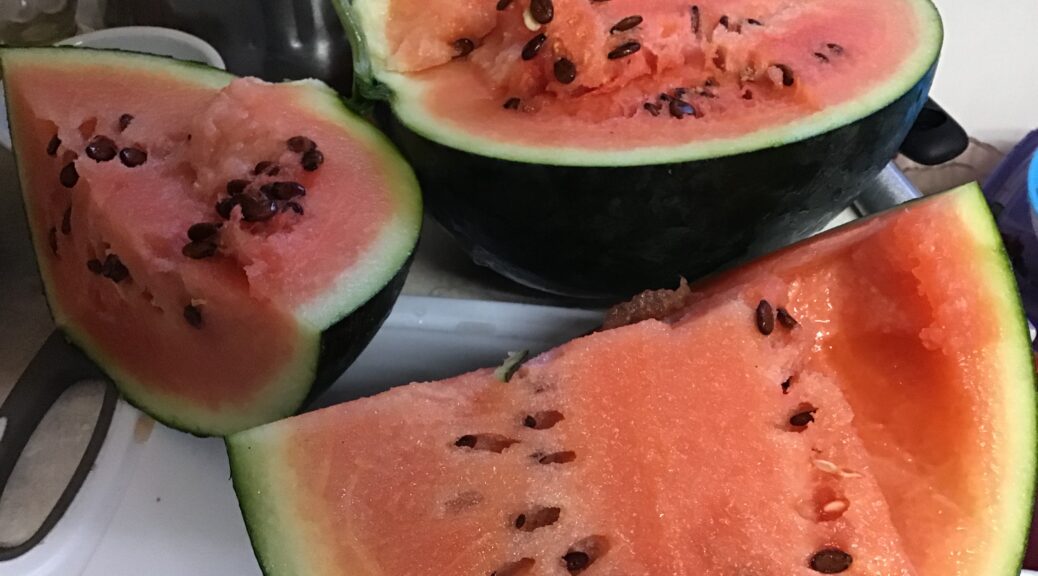 I grew a watermelon that tastes good! As Elmo would say, “Happy, Happy, Happy! Do the Happy Dance!”

We got one earlier, but it wasn’t that great. This is the Blacktail Mountain variety from Territorial, and is a personal-sized melon, bred to develop in a short season, with cooler nights. It worked! There are 3 super small ones still out there, and I hope they will be good, too. I saved seeds, since it’s open pollinated. Maybe I’ll grow it again next year since it WORKED!!! I’ve had very little success growing them in our climate in the past.

We are still eating tomatoes, zucchini and had a meal of green beans last week. We are still getting cucumbers and we pulled all the onions. They are drying so we can have them all winter.

Most of our week was consumed by my niece’s wedding. (See previous post for details).

Although formal weddings are never inexpensive, we did do things to help keep the cost of the reception down.

Rob smoked 4 kinds of meat on his Green Mountain Grill. He used various marinades on them and they turned out great! He got roast beef at the Chef’s Supply store a few weeks ago and froze it, as it was a good price then. The Ham was from Costco. Turkey breast was hard to find, but he finally got 2 at Walmart, of all places. He took it off the bone, tied it with twine and cooked it. When we were finding a hard time sourcing enough of other meats for a good price, my sister spotted some pork loin at Costco and the entire, huge piece was only $22. So, Rob went and got that and cooked it, as well, to make sure there would be enough. It turned out to be his personal favorite.

The meat slicer was borrowed so we would not to have the expense of purchasing one. We sliced for over 3 hours one afternoon, and the ham was already sliced. It was funny. At one point, the meat was shooting out wildly, with us cringing back, since we aren’t comfortable with the sharp, sharp-bladed tool–By the end, it was all over the kitchen, and in our hair, even. (The sliced meat, itself, was stacked and wrapped in plastic wrap and bags, and put back into the fridge immediately, so no worries there.). It took over an hour to disassemble it and clean it properly, and we were hoping it was done right. Thankfully, Rob met the owner at the wedding, and they talked. The man is going to double check our assembly work, to make sure it’s right. Whew!!!

We used some dill from our garden in the dips, along with many dahlias and zinnias in floral arrangements. Some peppers were picked to add to the decor, then chopped and frozen afterwards.

The biggest way we saved money on this reception was the amount of do-it-yourself projects we did and all the cooking we accomplished. It turned out lovely.

Since Rob was giving a prayer during the ceremony, the couple bought him this tie they wanted him to wear. We had to buy him a new shirt, as he didn’t have one. He usually wears t-shirts. I was able to use a sweater I bought on clearance a couple of years ago, but had never worn. I had purchased it off-season (hence the clearance price) and put it in a drawer to save until the weather was righ, …..but forgot about it for a while. I put it with a skirt that I’ve had a long time, but matched perfectly.

Since all fridges of all family members within reasonable distance were crammed with wedding food, I didn’t let anyone shop for groceries last week. In fact, on Saturday, I resorted to peanut butter sandwiches for both me and Mac for lunch. Neither of our favorites, and if you know me at all, you know I usually eat about 1-2 per year, but that was our option:). I wasn’t allowing cooking or leftovers there toward the end, either, hence the sandwich. Rob and Mac ate a jar of pears between them for another meal….You see how it was.

Today, I took a bunch of the leftover carrots and celery and used them in a vegetable-beef soup. Lovana and I had salad for dinner. Rob had a meat sandwich. So, we are starting to work through the leftovers we brought home already.

I picked the few remaining tomatoes, green and red, from one row today, then pulled the bushes up. Cleaning out the garden is one of the next big goals to accomplish around here. I will make a double batch of Salsa Verde to can in the next day or so with the green tomatoes. Rob chopped up all the red peppers (Carmen) and froze them on Saturday, so those bushes can be pulled, too. I don’t have enough time or stamina to do this entire job as once, so I’m breaking it up and plan to do a little each day,