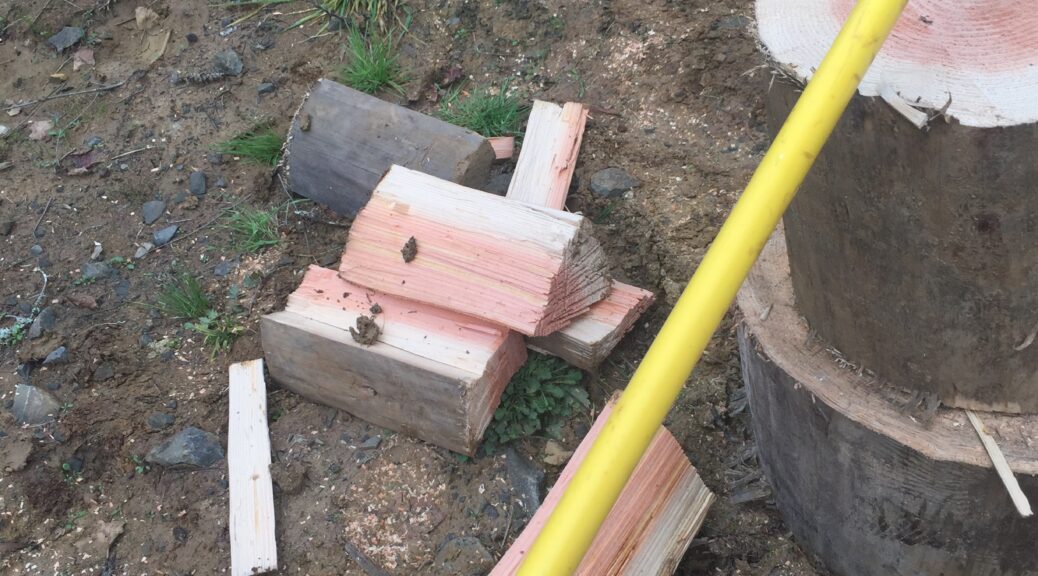 Rob spent 3 days this past week sawing wood in the forest.

Some of the logs were quite big, so he needed to split them with a splitting maul after he cut them into stove-length pieces.

He loaded the back of the van as full as he could each time and I helped him haul it to the woodshed at the back of our place and we stacked it. Overall, he figures he got more than 1/3 cord each time, bringing our new woodpile to over a cord so far. We stacked this along a fence in the back and he covered it with tarps. What is inside the woodshed, and already dry, will be for now, and this will be for later. He likes to be at least a year ahead on his wood supply, and this is the first year for a long time that he can work on meeting his goal.

Patsy went a couple of times and even learned how hard it is to split wood with a splitting maul. She got a few pieces split, but happily left most of that to her dad:)

Frost was predicted. I picked the entire row of lettuce, washed it, and served many salads this week. I still have some “Arctic Blend” winter lettuce planted. I’ve never grown it before, and I’m very interested to see how it holds up as the weather turns colder. I picked the first of the fall cabbage and we ate half of it already. There are several more out there. I also got a few more cherry tomatoes and a few more zucchini and tromboncini zucchini. Then, I picked the green cherry tomatoes and laid them in a 9 x 13 pan in the garage to see if they would ripen.

I bought groceries this week and sent Rob to Costco for vitamins while they were still on sale. This week, I focused on a few items for recipes I found in magazines that sounded good. These recipes use things I have on hand, minus one or two small items, which I bought. I also got sale items that worked into my menu. My favorite item was a bag of mandarin oranges for only $1.49 for 3 pounds. They are a real treat around here and that’s an amazing price. We could only have 1 bag, but enjoyed them. They were especially handy as Rob and Patsy packed several lunches. My aunt also found potatoes for a good price and picked 10 pounds up for me.

We also used quite a few home-preserved items. After weeks of filling jars, it’s nice to sit back and just empty some:).

I cooked a salmon filet one night. A while back, we found them, frozen, for $2.50 for 12 ounces, at Grocery Outlet, and got several because it was such a great price. Even with Lovana eating dinner with us that night, there was plenty for us all when lots of veggies were added. It was a delicious change.

I’ve been sorting, cleaning, and organizing small areas when I get a few minutes. I haven’t got very far, but a few areas look better and I found a few old projects that need to be worked on. I’ve been sewing for Patsy whenever I get a half hour or more. Some days I didn’t get any time, but most days I can squeeze out that much at least, and am able to make progress on my latest project….making her several clothing items to get her wardrobe in good shape for fall and winter.