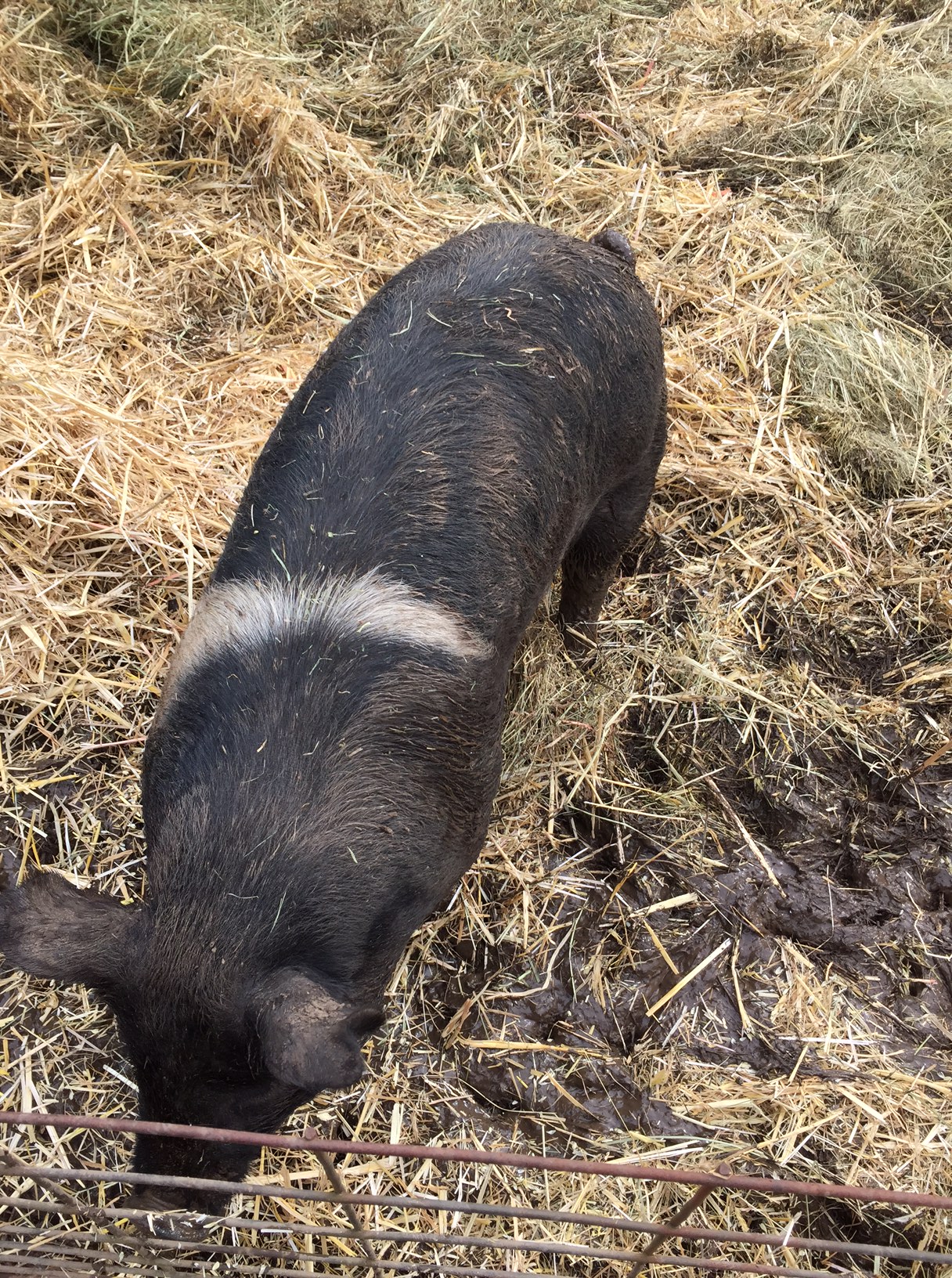 This past week was a mixture of saving and spending–kind of like life–full of good and bad.  Here’s how it went:

The pigs continue to grow.  An appointment was made this week for the mobile slaughter man to come the first week of March and take care of them.  They are all spoken for, except 1,  and several are paid for.  We anticipate Rob’s labor will pay for our pig.  It got a little complicated when we realized a few weeks ago that one of them had not been properly castrated by the woman we bought them from.  After phone calls, and pictures being sent back and forth, she traded in the incorrectly fixed pig.  Thankfully, Rob was able to catch it with no problem and take it back.  So, it was not a complete loss as it would have been if we had been stuck with a viable boar.  They aren’t good to eat, and we have no need for a daddy pig.  The new baby is smaller, by far, then the other ones. So we are out a bunch of feed, plus the cost of transporting the pig and trading it in.   We are still not sure how we are going to handle that–but the good news is that we are still going to make enough money from the other ones to pay for our pig.  We will be lucky to break even on this one, though.

Rob picked up a temporary job and earned a bit of $.  He might have been needed one more day, but a piece of glass he had previously stepped on caused an abscess in his foot, causing us to go to the doctor for lancing and antibiotics.   She said he had to stay off of it.  The good news is that he is healing up nicely, now, and he did get paid for the one day.

We sold some dishes, cookbooks, home-school books, and a few small items from the shop on e-bay and a used book store.  We got over $150, which will bring our savings total for fixing up the new house up to around $600, once we get it all into the right account.

We did not buy a new refrigerator or popcorn maker when they broke.  I am using the fridge in the garage and a pot for now.

We had our taxes done instead of having Rob do them with Turbo-Tax as usual.  It was complicated this year because we had done some logging.   We had a fear that we would owe a lot, but that was not true in the end.  We also worried that our inexperience and lack of knowledge would cause us to make a mistake that would come back to haunt us later.  We will be getting a small refund.  I’m sure we paid taxes, but there was enough money withdrawn from Rob’s paychecks from last year to cover it.  I’m so glad we had this firm do the taxes.  They had a lot of experience in timber sales, which is why they were recommended to us  and knew how to calculate which part of the sales were actually profit, and how much timber was purchased when we bought the property (they don’t consider that profit).  We still do have expenses to pay, such as replanting baby trees, etc., so still are not spending the money until after we have paid what we need to.   Still, we had envisioned paying, and ended up not paying and even are getting a bit back—-happy day! 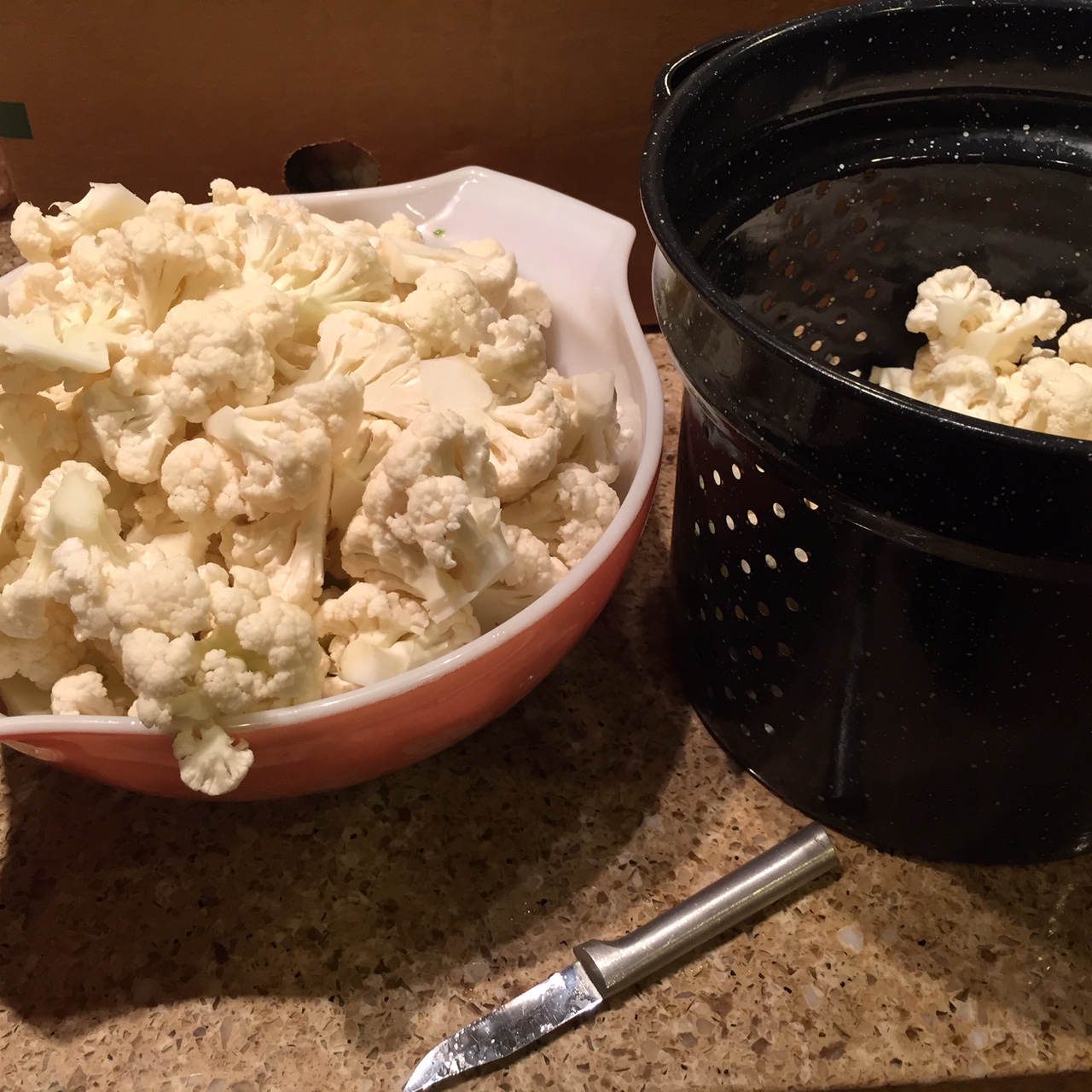 We have been eating a lot of that cauliflower I froze last fall, along with many other vegetables I preserved by canning or freezing.

I shopped on Thursday at Costco for myself and 4H club, which was Friday.  I am in charge of cooking classes and there were 9 recipes to prepare for this week.  I purposely chose recipes that used my stockpile.  I didn’t have everything.    I didn’t have time for multiple stores, so got what I could at Costco and spent about 10 minutes in a Safeway getting the few remaining items.

I took the kids to McDonald’s Thursday after dance.  I figured we could afford that with the excellent news about the taxes.  Thursday was a crash and burn day for me–I could hardly drag one leg in front of the other, but needed to go with Rob to the doctor (we weren’t sure if he was going to be able to drive after they fixed him up–he actually could).  I also wanted to see what the Dr. found–had I gotten all the glass out, done something wrong, etc.  What did I have to do to take care of it at home? Since he could not see the bottom of his foot, it was all me.  Also, planning and getting ready for so many cooking classes for 4H is time-consuming, and I was exhausted because I had saved that job a little too long.  By the time I figured out that I was the one who was going to go to take the kids to dance, shop like  a maniac while they were in class, and do dinner as well, since Rob was in bed at that point with his foot up, I decided that Mrs. McDonald could make dinner.  They accidentally gave us 2 extra cheese burgers and an order of fries.  They caught the mistake and gave us the extra food for free, as they would have had to throw it away, and it was their mistake. We took them home to Rob and he didn’t even have to get out of bed to eat dinner.

It just gives me a larger appreciation for Rob.  I truly could not do well at living the life we lead without his constant help and support.  He has always wanted a large family,and promised long ago to bear his share of the load of the daily work involved with so many special needs kids. And he has.  He will do doctor visits, therapy, dentists, DHS visits, shopping, laundry, cooking, etc., etc., etc., as will I.  It takes us both. Let’s face it, we do SO much work ourselves because our kids either can’t or won’t.  Don’t get me wrong, we train them, but it often takes much longer to do a job than is normal, or it is beyond their ability.  Then you add in sometimes oppositional behavior, caused by neurological glitches, or just teen-age years, and it gets interesting sometimes.  So, we tag team the emotional part as well, and handing out the consequences, etc. He has never resented giving up the toys he thought he wanted when we were young, such as a fancy pickup, a boat, time for fishing a lot, hunting a lot, etc.  I feel like it’s Valentine’s Day all year long, because our love has grown and matured over the last 33 years to so much more than it was when we first got married.  I am blessed.