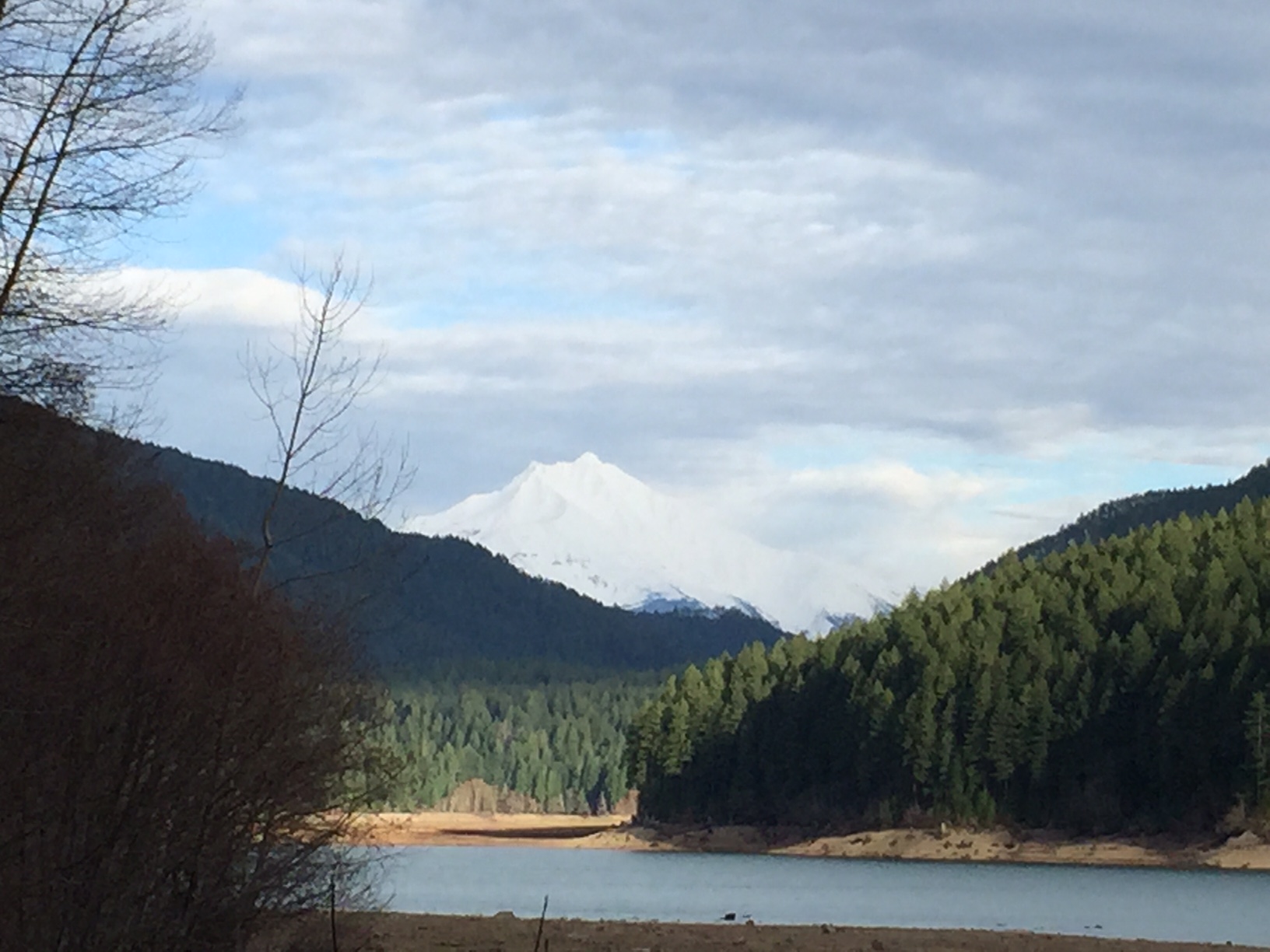 We went camping at Detroit Lake Campground.  We needed to clear out of our home so they could have an open house yesterday.  That is Mt. Jefferson peeking out behind the hills.  We can camp for free, a few days a month, using our foster and adoptive Oregon State Parks special access pass.  We only took one vehicle, the van we use to tow the camper, to save the $8/day extra car fee.  It did cost a bit more in gas than the smaller car would have used, since we had to run home for a 4H event and so Rob could ship things for his e-Bay business, but it was still cheaper over all.

This time in our lives is going to cost us something, we are finding, while at the same time, we can still save money in many ways.  It just looks way different than our usual way of living.  It’s going to take some adjusting, but I am confident we will figure it out. 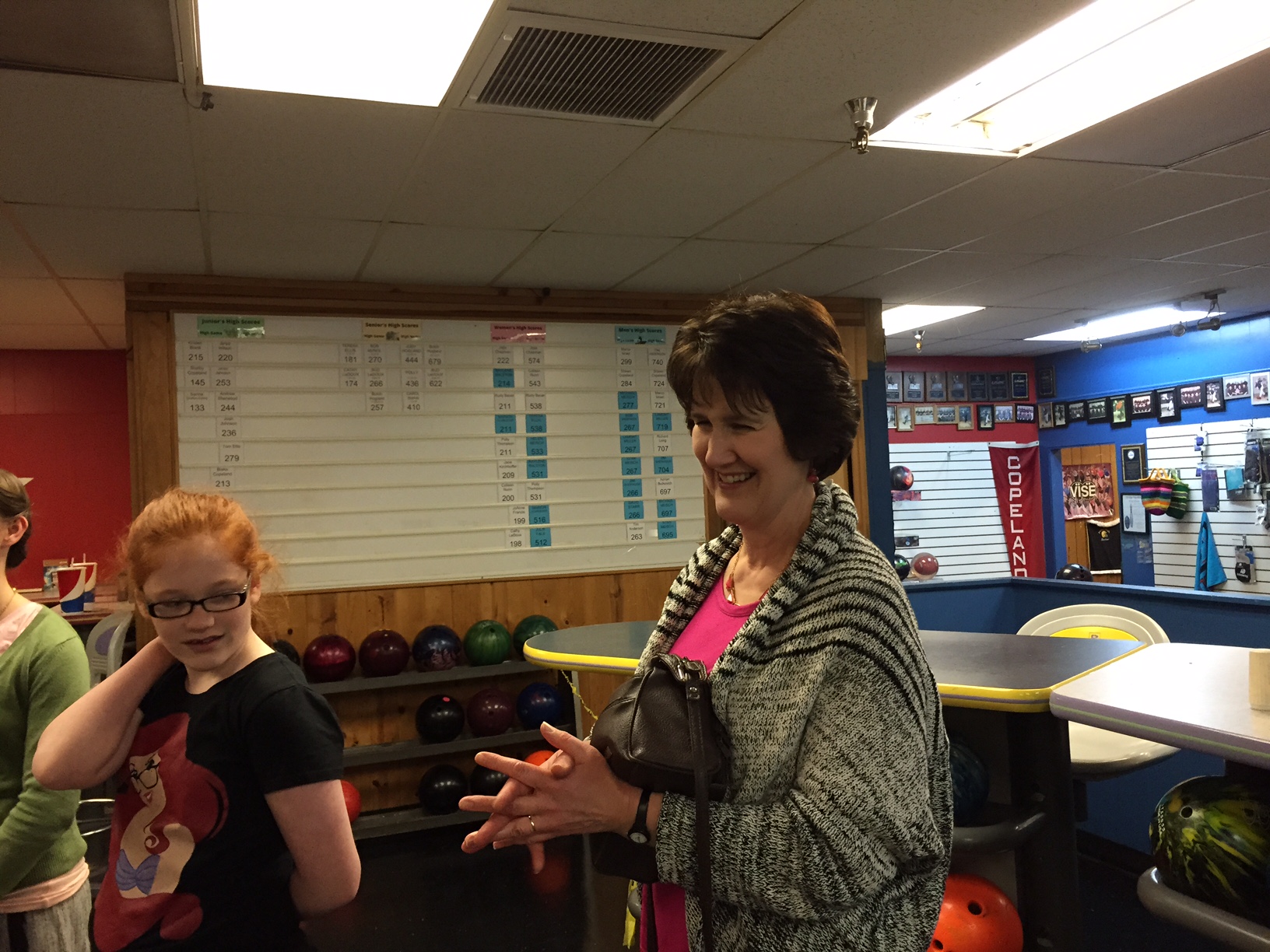 We went to the bowling alley for a 4H junior leader party that had been planned for a long time.  Patsy wasn’t really supposed to be there, being too young, but no one fussed.  Aunt Rosalie made sure the big kids welcomed her in.  The club funds paid for the bowling and shoes.  I paid for 2 additional games for my girls, as we had to stay there longer, since Rob was at our house, tending to business, and driving Lovana to work.  Since the shoes were already paid for, and we had a group rate, it only cost me $4 more.  I sprung for a couple of sodas and fries for the kids, and that was it.  One club member had a birthday, and another brought him cupcakes, so that was a nice way to combine things.

We were able to use Subway coupons to get our lunch.  We had 2 “buy one, get one free” coupons, and Lovana had just eaten a huge breakfast at the camper and didn’t want one, so that worked out. 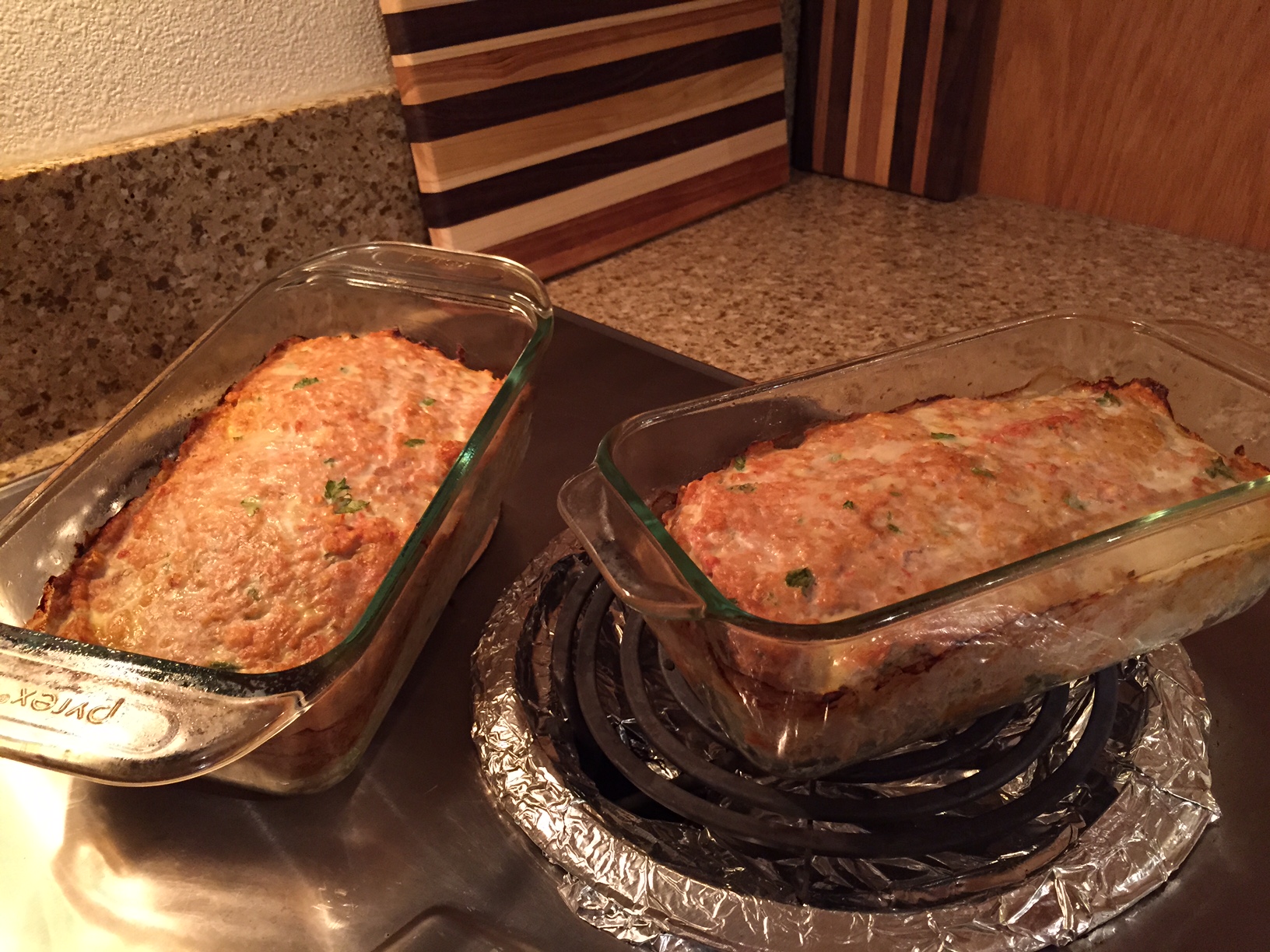 I made 2 turkey meat loaves.  I froze one, and kept one for Sunday dinner.  Only one niece is at my sister’s house this week, the rest of the crew are on vacation.  But, we are hanging around anyway after church, eating, playing with the dog, etc.  Our house is being shown at least 2 more times today, so…….I have instant mashed potatoes, green beans, and salad stuff for a quick lunch today. 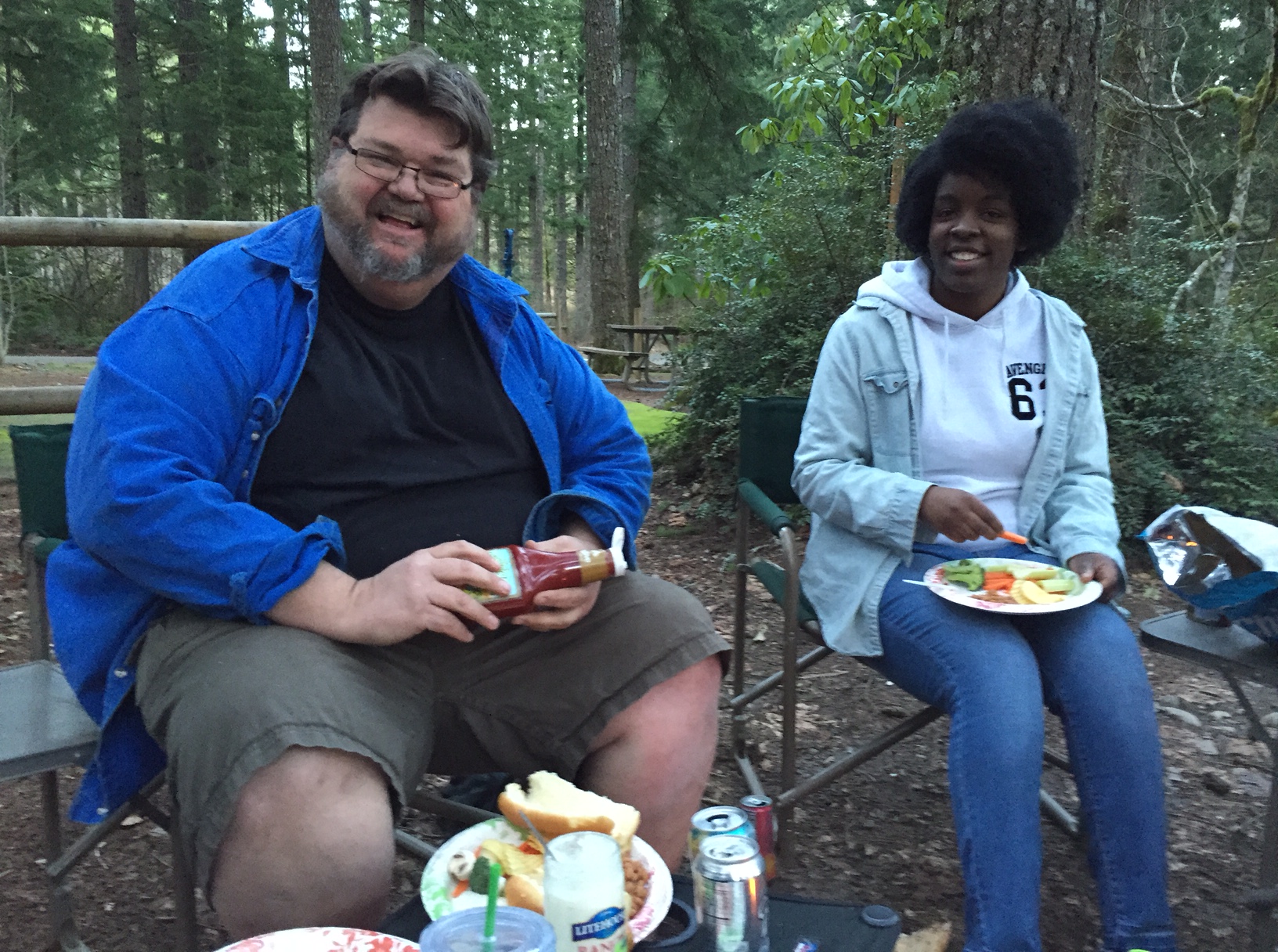 Lovana only got to go camping for one night.  She had to go to work, and could stay with Grandma after work.  She wanted to roast things on the fire for dinner on her one night up there, so we did.  The weather was lovely.  We had a simple meal of hot dogs, baked beans from a can, cut up veggies and ranch dressing and marshmallows.  The other meals were pretty simple, too.  I have my camper stocked with food from home, plus I added fresh veggies for salad and munching, some sausage, some lunchmeat and a few more items.

My nephew came up for the day yesterday, and he and Rob cooked chicken over the fire. This was 1/2 of a bag I got at Safeway for $4.90 for 10 lbs.–so $2.50 worth for all of us, including that hungry young adult!  I marinaded it before I left home, and put it all in the camper fridge.  They also threw some foil-wrapped potatoes into the fire and baked them, and we cooked home-canned green beans.  I have spent quite a bit of time loading the camper so that we could have many tasty meals from the cupboards in there, and also have one bench seat where I put quite a bit of my home-canned items.  I will spend some time this coming week re-stocking what we ate for the next time.

We spent about an hour one morning making campground reservations for the coming months.  We made the maximum we were allowed to make with our free pass.  We have no idea when our house will sell, so it is wiser to make reservations, and then cancel, then not have anywhere to go.  (It will cost us a few dollars each time if we cancel, but it’s worth it in the long run).   Many of the campgrounds are already full for summer. We will park our camper at my sister’s house, then go camping , then back to her house, etc.  She doesn’t have full hook-ups, so we need to go somewhere to empty our tanks between her house.   Once it sells, we will be spending a lot of time looking for the new place, buying it and then moving in.  It may need some work (for sure, because we aren’t going to have enough money for another house in as good of shape as our current one, or as large.)  Rob’s very handy, so no worries there, it just may take some time.

They went fishing, but nothing was biting.  We took several walks.  There is a trail around the campground, plus the roads that run through the campground. Ja’Ana used her battered scooter she bought for $2 long ago at a swap meet.  It doesn’t go very well on the gravel, but she rode it a lot on the pavement and carried it when the gravel was too rough. 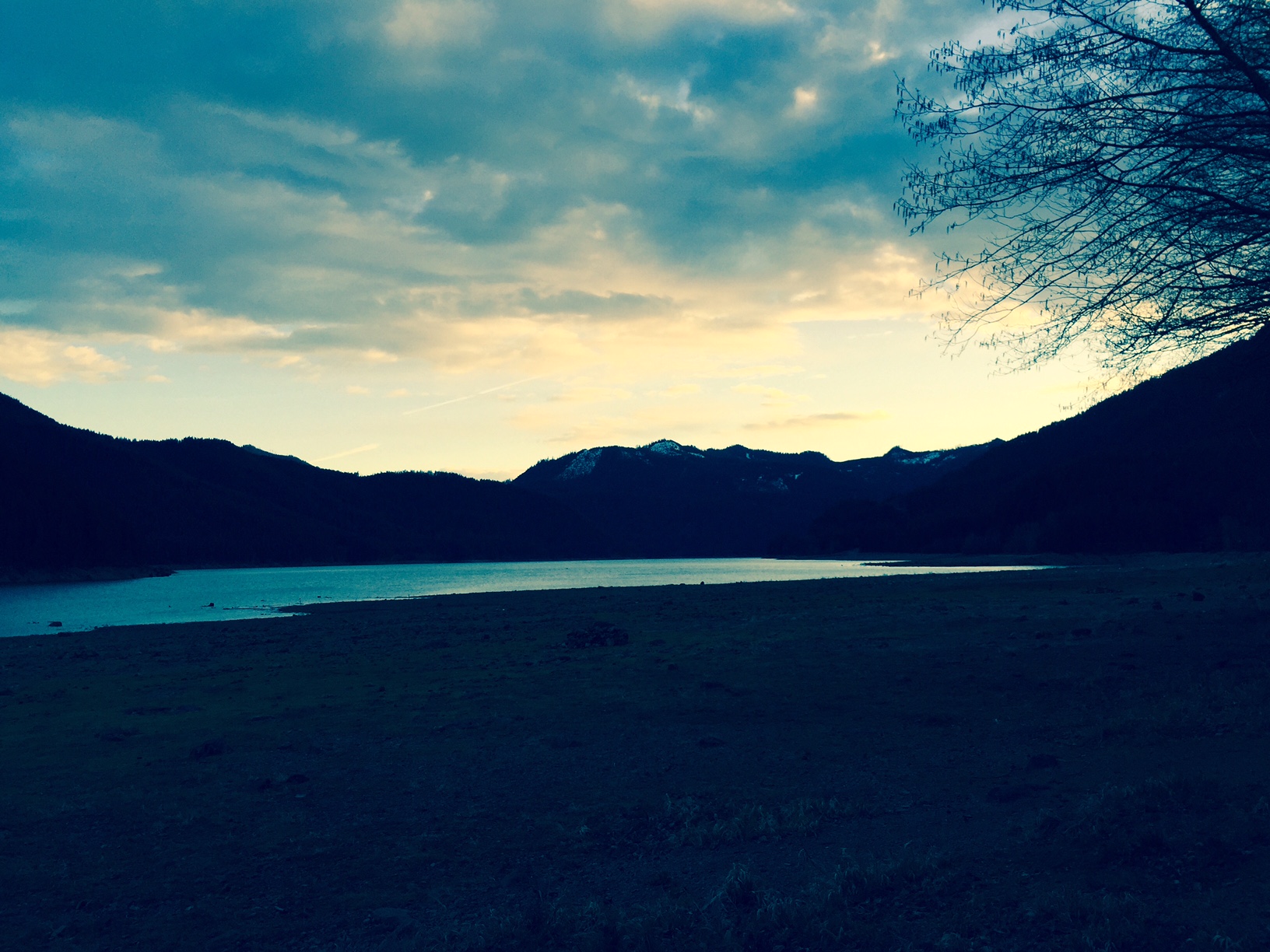 She also spent a bit of time playing with the different filter choices on my phone, taking different pictures of the lake at dusk.  The kids and I read free kindle books I had downloaded before we left, and we watched a Disney movie from the library each night.  Patsy and I played a game as well. 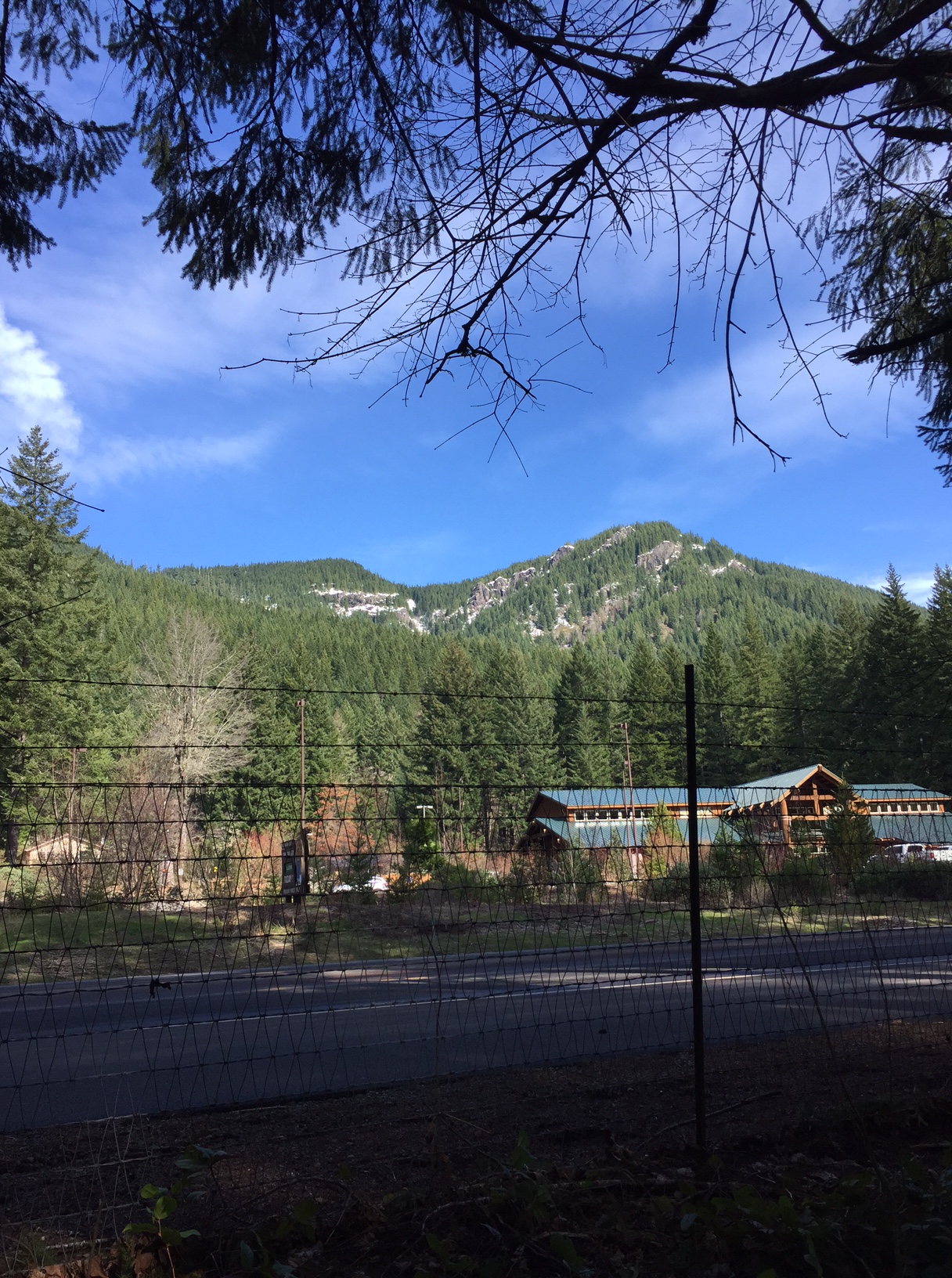 We also got quite a bit of free entertainment watching this near-by hillside.  They are doing a “log-recovery operation”  (logging), with helicopters.  It is fascinating to see how they come over that hill with a helicopter.  The helicopter has a long chain attached.  At the bottom of the chain is a bundle of logs.  The bring it to a landing place on the left, and leave their logs there, and go back for another load.  I could not get a good picture with my phone.  I would have needed a good camera with a better lens for distances, but we enjoyed watching.

Our Rav4 was fixed and we have it back.  It was a warranty issue, and they re-built the whole engine!!!!  So, now our car with over 100,000 miles on it is in excellent shape to go 100,000 more or even further.  We paid to get the water pump replaced and a timing belt, as they were worn and it was time to replace them.  The rest was free to us, including the rental car for a week.  I’m excited about that.