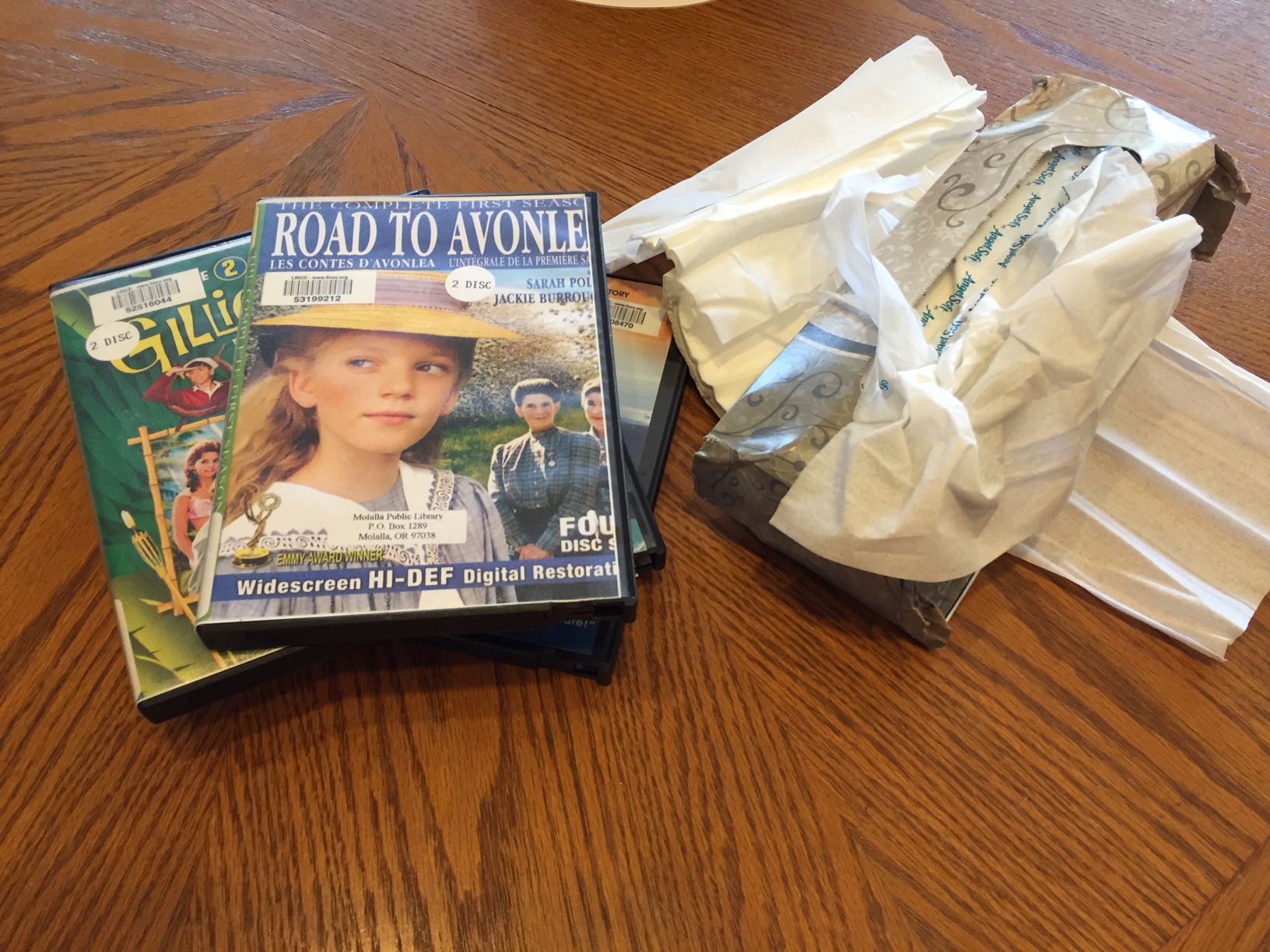 This past week, I had that horrible cold/thing everyone has been getting around here.  On Friday, Patsy didn’t feel well, either.  We went to the library and got some movies for her to watch.  We also made great use of the free tissues we were given last fall.  You may notice the box is very crushed, but they still work fine.  She’s pretty well done with it.  I, however, am still coughing a lot after 12 days of this.  Hmmmm…..Maybe I should watch more movies????   The Road to Avonlea dvd’s  are a tv show that was made years ago, using the setting of the Anne of Green Gables stories.  She enjoyed them, and Gilligan is always a favorite around here. 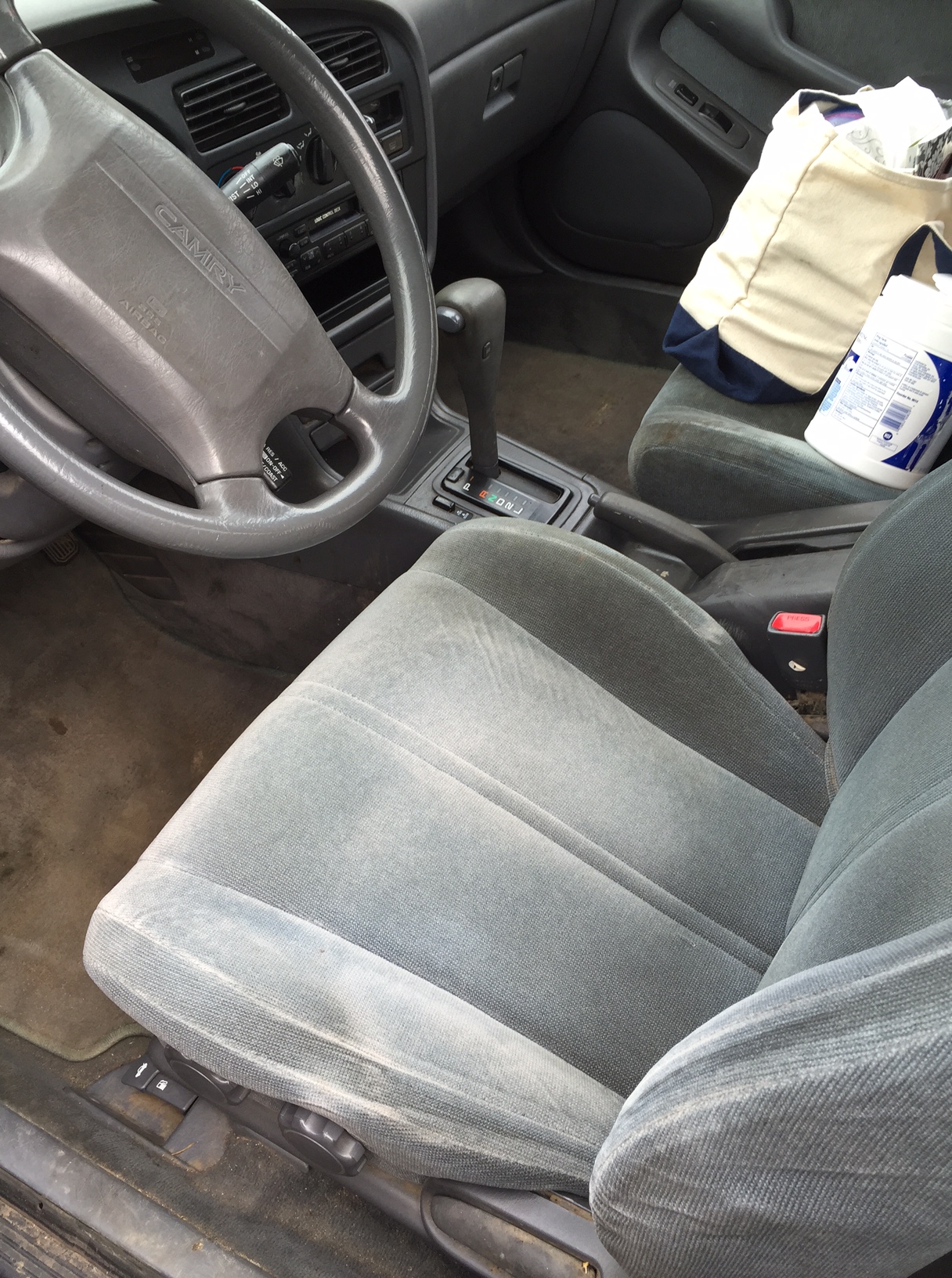 Patsy and I spent quite a bit of time cleaning up our old Toyota Camry. My nephew, Steven, just put it back into working order.  He put a new door on it.  The old one had been crunched a while back and you could only get in by leaning across the passenger seat and reaching over and opening it from the inside.  That got to be quite inconvenient.  Then, the axle needed replacing, and finally, it’s battery went dead one too many times.  We didn’t run it for several months.  When Steven offered to fix it, we were very grateful.  It has been a great car for us, and still runs!  We would love for one of the older girls to learn to drive and use it.  J isn’t quite old enough, but Lovana is, and J soon will be.

It has almost 300,000 miles on it, and where I say it looks better, I’m not sure it will ever look super good ever again.   It’s as clean as we can get it without shampooing it.  We vacuumed it out at a do-it-yourself station at a car wash.  We used $3 in quarters.  I took some disinfectant wipes with us and we wiped and wiped.  There was even some mold growing in places, so we got that, too.  I was very grateful to have it, since our van was being fixed and I wanted to go somewhere!

A good friend fixed the van.  He did it for free, as he does for us, and we are thankful.  The shifting lever in the column was not shifting properly and would not go into “park” correctly, sometimes causing the van to start rolling backwards when we thought it was parked.  It only took a couple of times for us to put that on the top of the list!!! 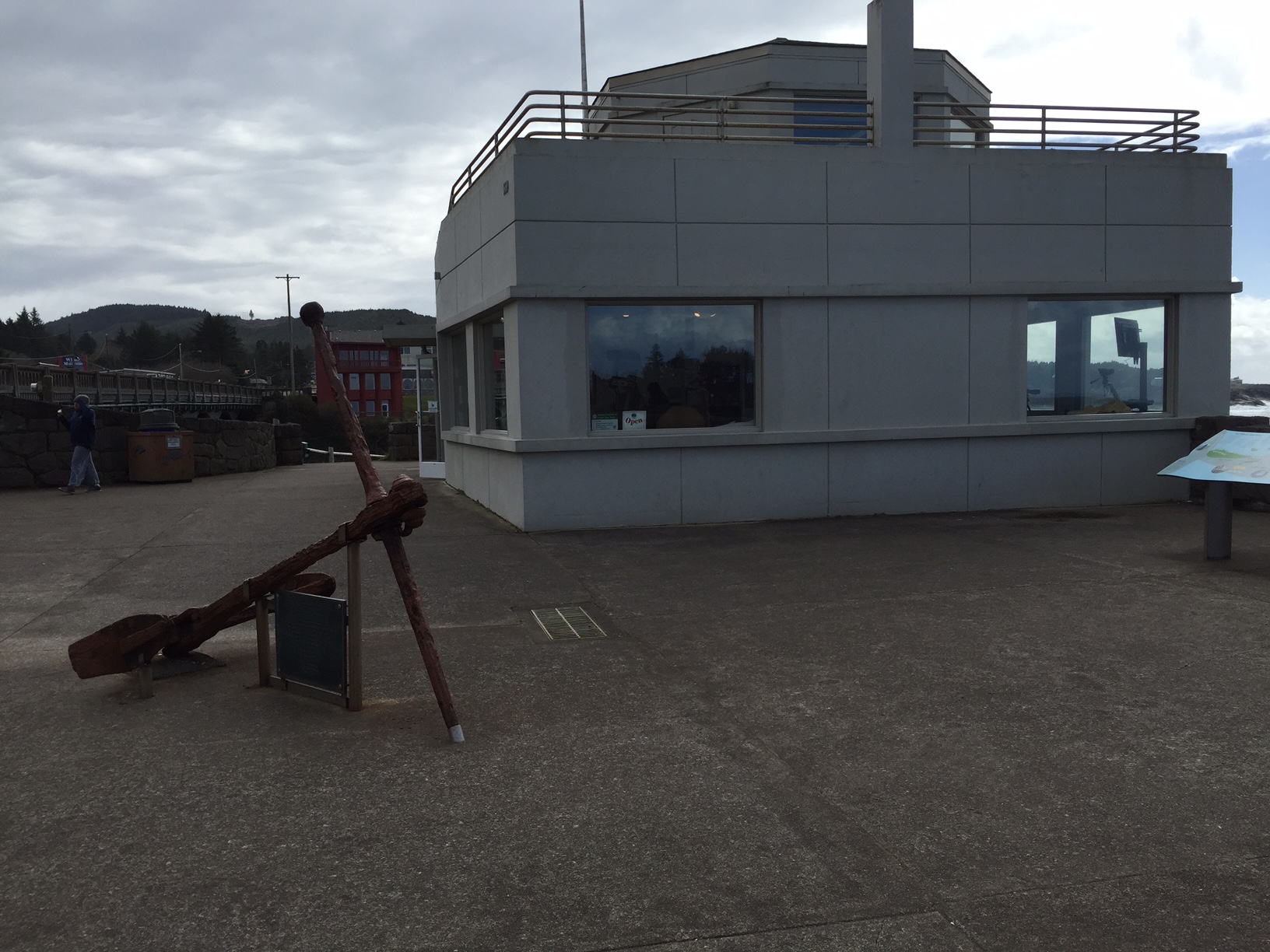 We went to the whale-watching center at Depoe Bay.  We didn’t see any whales, but had a good trip to the beach.  The center is free and they have lots of information and viewing stations to look out for whales. 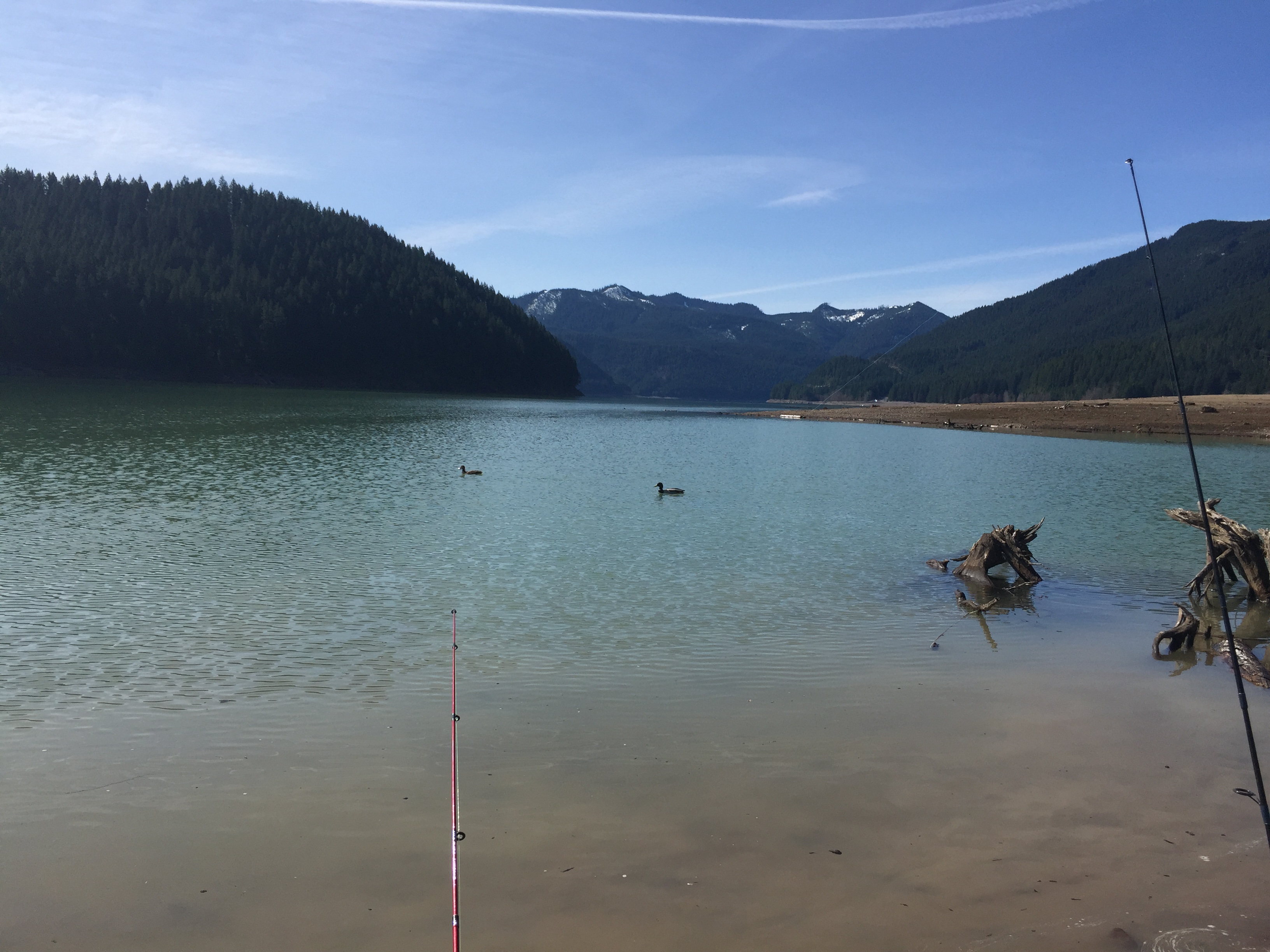 We went camping for a few more days, went to the zoo, the mall, the library, and the beach during spring break, mostly while getting out of the house so they could show it.  It was nice to do something different than sort, pre-pack, clean and scrub, etc.  So far, there have been 31 families/couples/people through the house.  It’s been on the market for a little over a week.  We don’t have an offer, yet, but feel encouraged with all of the interest.  I know this will all pay off in the end.  We tried to use coupons, get deals, share food, used gift cards, and whatever else we could do to save money during all of this running around, but it was still somewhat expensive.  Camping was actually the most economical, since we took our food with us, and got to stay there are cook it, for the most part, during the 2nd little part of the camping trip when we went back up there. 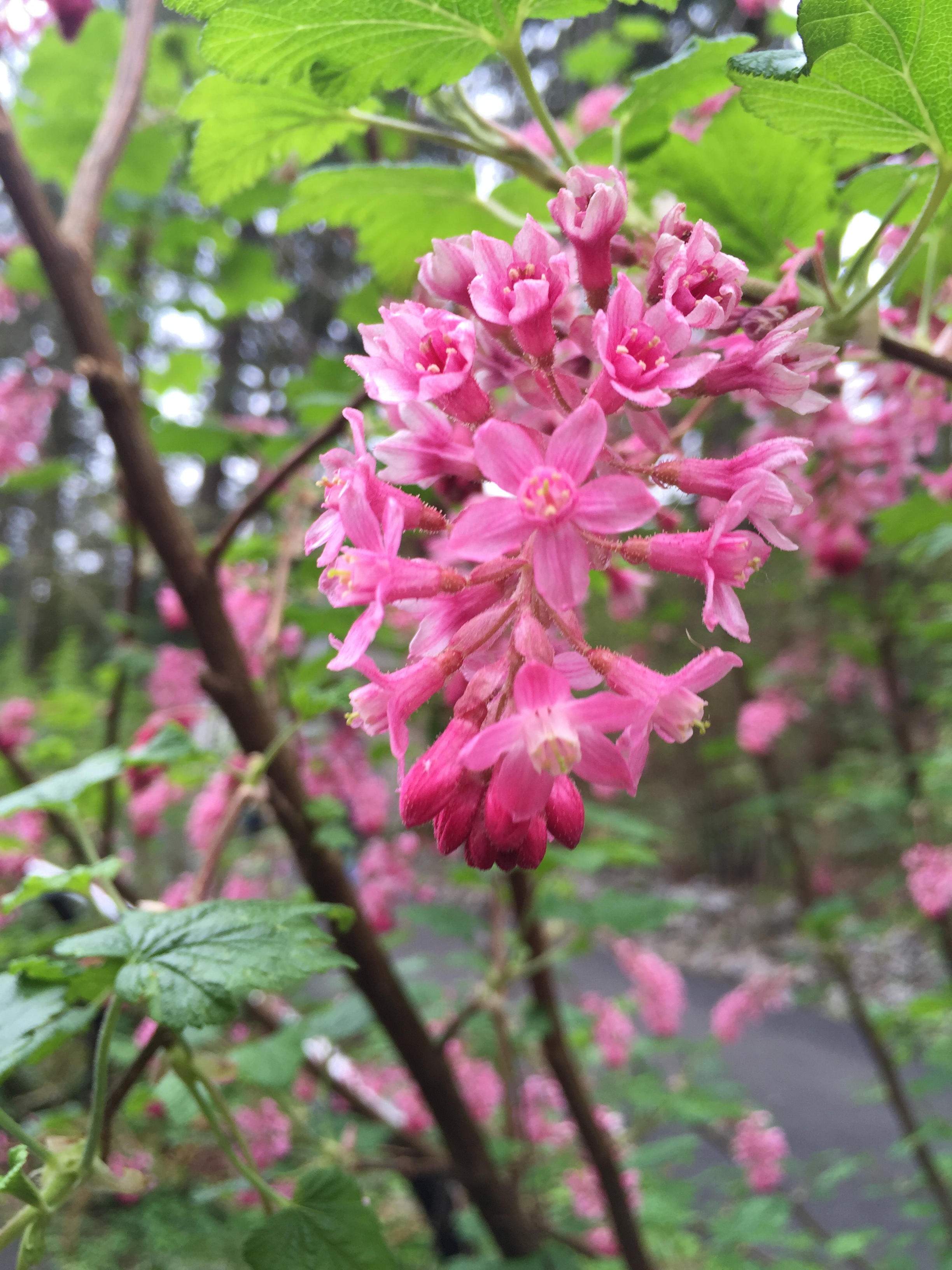 We looked at and photographed wildflowers wherever we went.

While cleaning, I was able to find a couple of home-school books that I will use for Ja’Ana now. She had finished up a couple of things a few weeks ago. She hasn’t been doing very much school lately, with all of the other things we have been doing, but I wrote out a pretty hefty 2-week schedule for her, so she can get back on track and caught up. I also had time to work with her on math during the first part of camping, before she went on her mission trip.  So, she’s set, and no money out for new things right now.

I weeded my herb raised bed.  It is right by the house, and is handy to use when cooking.  I might as well enjoy it while I still have it, and everything I make a little nicer can only help with selling the house.