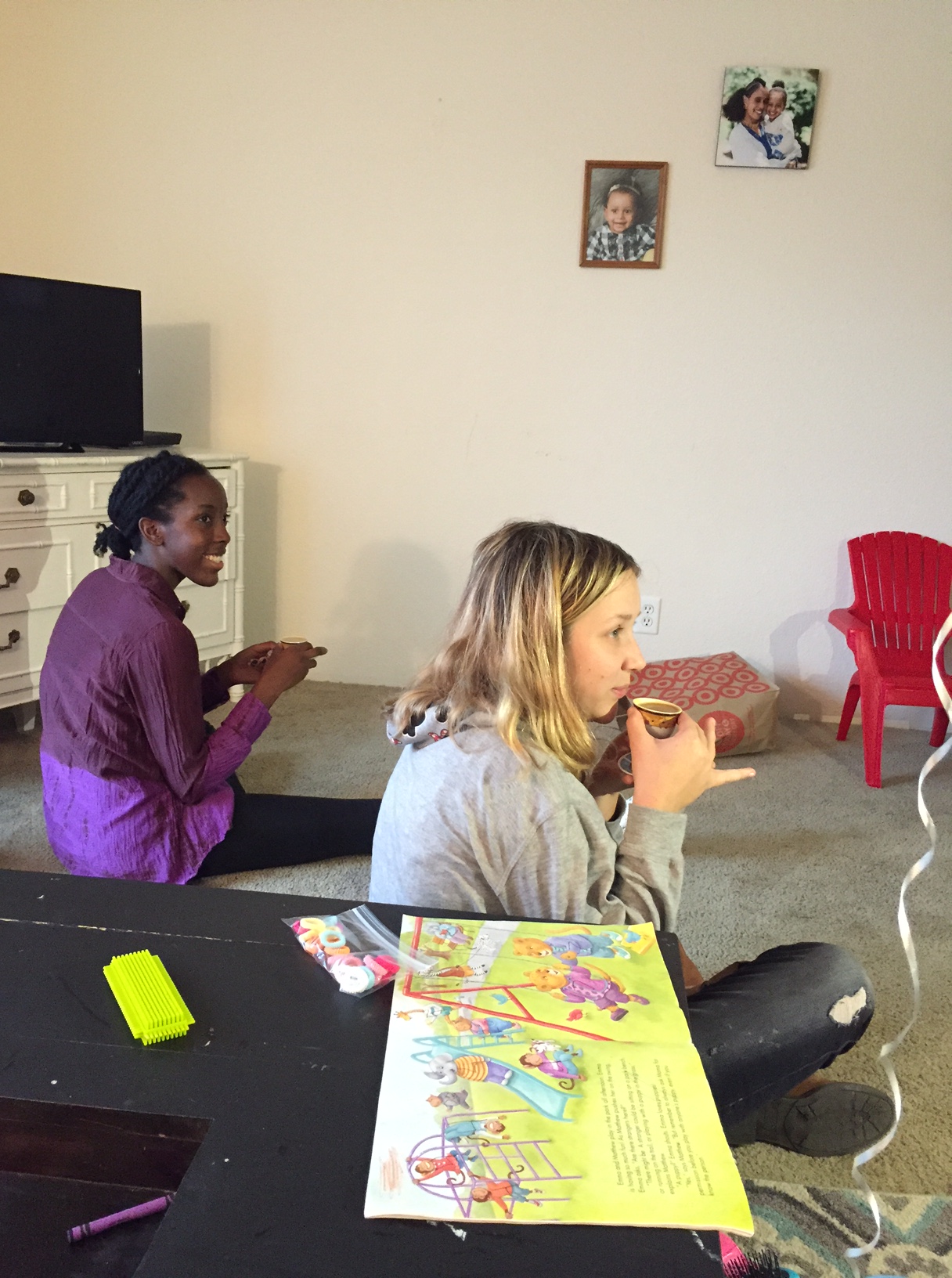 Last year, I promised Ja’Ana that her homeschool year would be filled with many field trips.  I was not able to deliver on that promise, due to all that happened with Rob’s job, moving, etc.  This year, I am determined to make that happen for her and Alissa.  So, I am calling for ideas from the whole family.  The response has been terrific.

My sister, Rosalie, has a friend who came from Eritrea, a country on the NE part of Africa.  She arranged for us to go with her to visit last Wednesday.  Ja’Ana and Alissa Googled Eritrea, a country we really had never studied before and Ja’Ana read interesting facts to us all the way up I-V.  We had been warned by Rosalie that her friend was going to cook for us, and that we should bring some food as well.  So, the girls decided to make peach crisp and cut up veggies with ranch dressing.

They were served huge plates full of Eritrean food that Harnet had made!  There was flatbread made from teff and barley flour, a spicy red sauce with chicken and hard-boiled eggs in it, and some greens cooked with bits of meat.  The spicy sauce was very SPICY!  I was EXTREMELY proud of both girls.  They were very polite and ate as much as they could.  Ja’Ana actually enjoyed almost all of it, and Alissa liked some of it, but they never blinked an eye.  I love the spicy chicken, so it was no hardship for me to eat it, and I enjoyed it very much.  The greens were good, too.

Later, Harnet made us coffee.  I though she was making a pot, and told her not to make me any, I didn’t like coffee.  OOPS!  That’s not what she meant.  I quickly changed my tune. 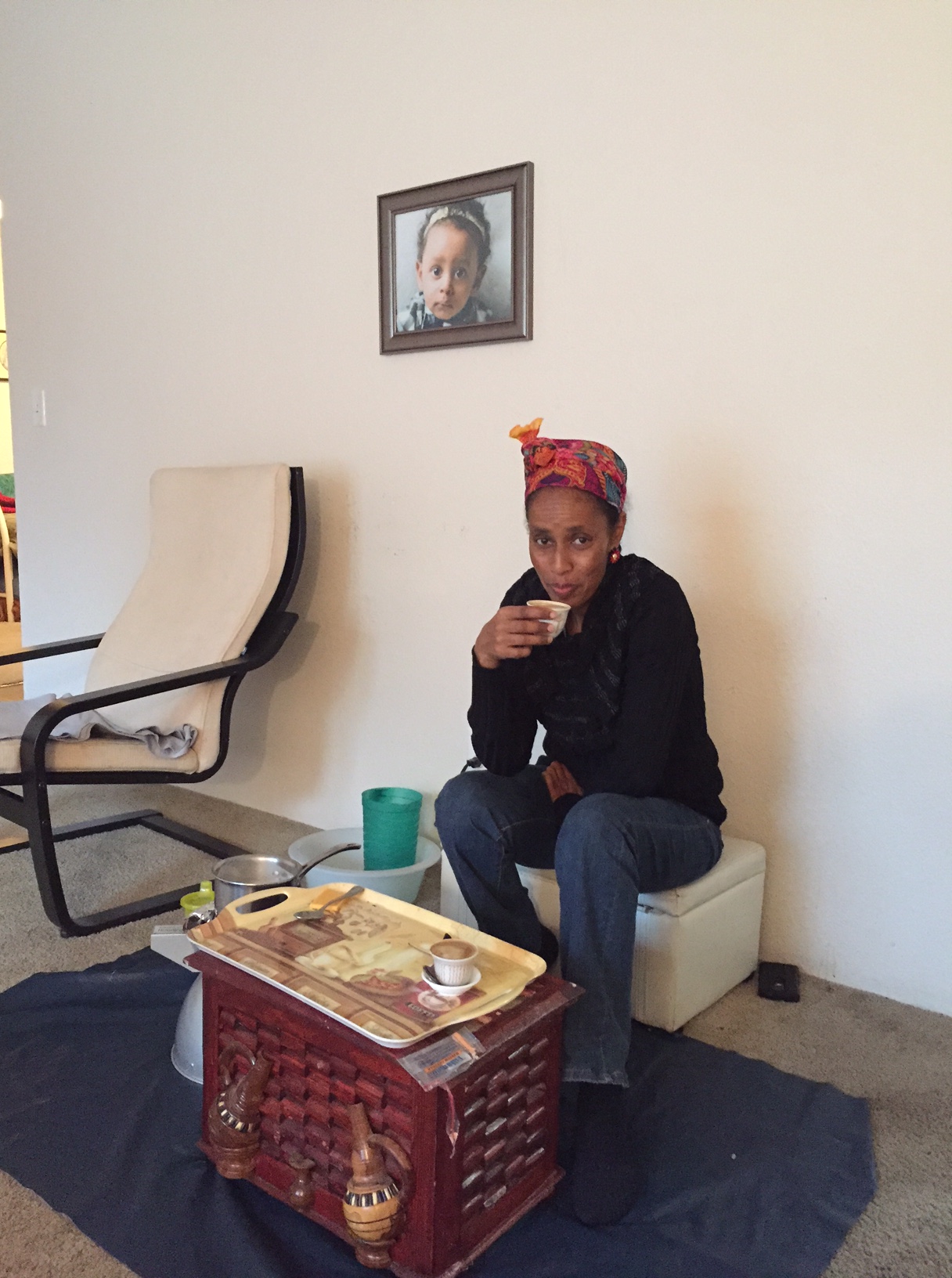 She set up this coffee-making station in the living room and proceeded to roast coffee beans, grind them, and make coffee!  It was very strong, highly sweetened, and I drank my little cup-full.  I was touched by the trouble she went to for the girls and myself. 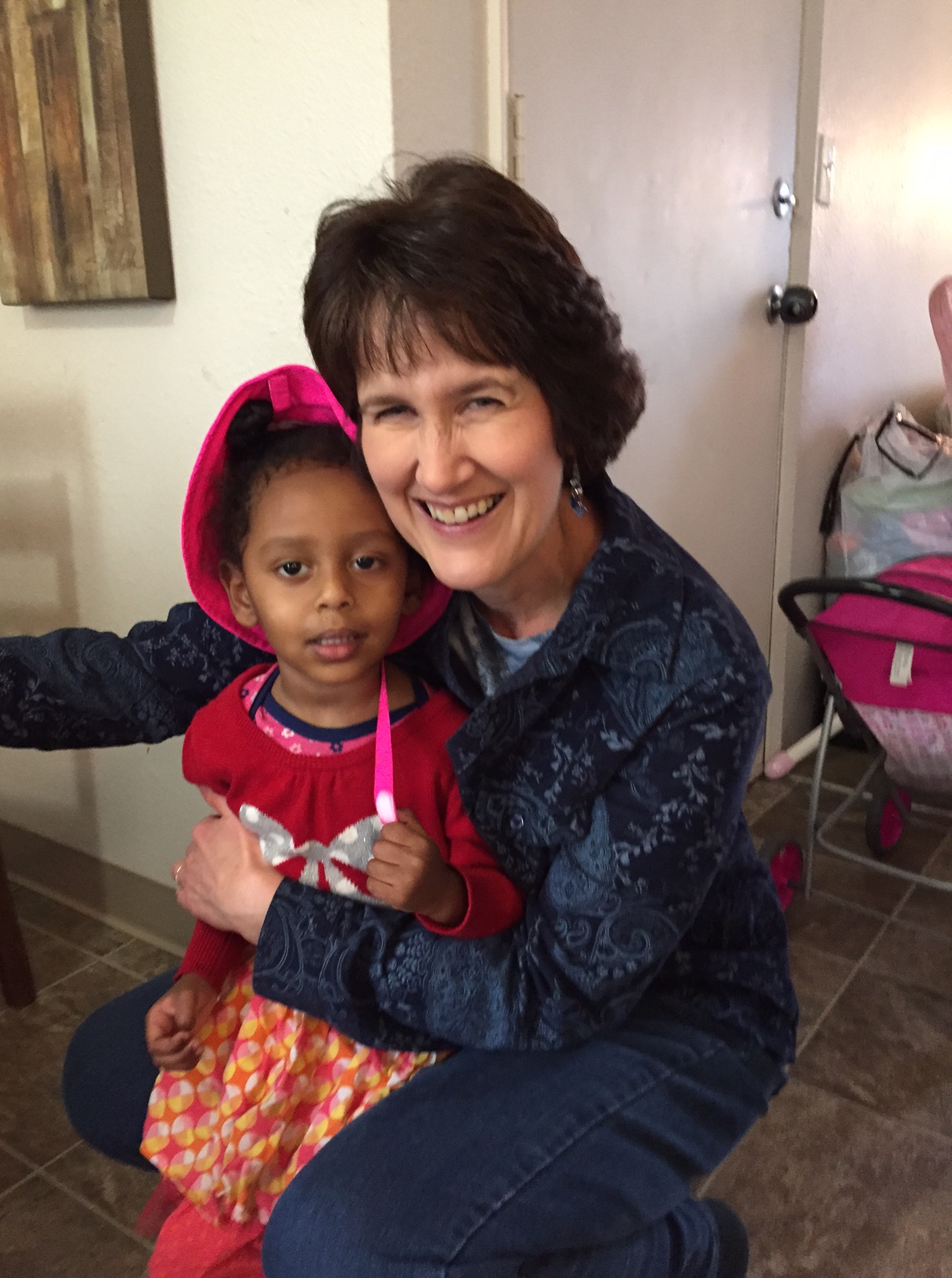 Harriet’s little girl, Dinuite, loves Wo-Wah (Rosalie).  She calls her something like that.  The girls took her a little doll and a couple of balloons, and by the end of the visit, she was warming up to them as well.  But she LOVES Wo-Wah.  Of course, Wo-Wah loves her too, and they played for quite a while together. 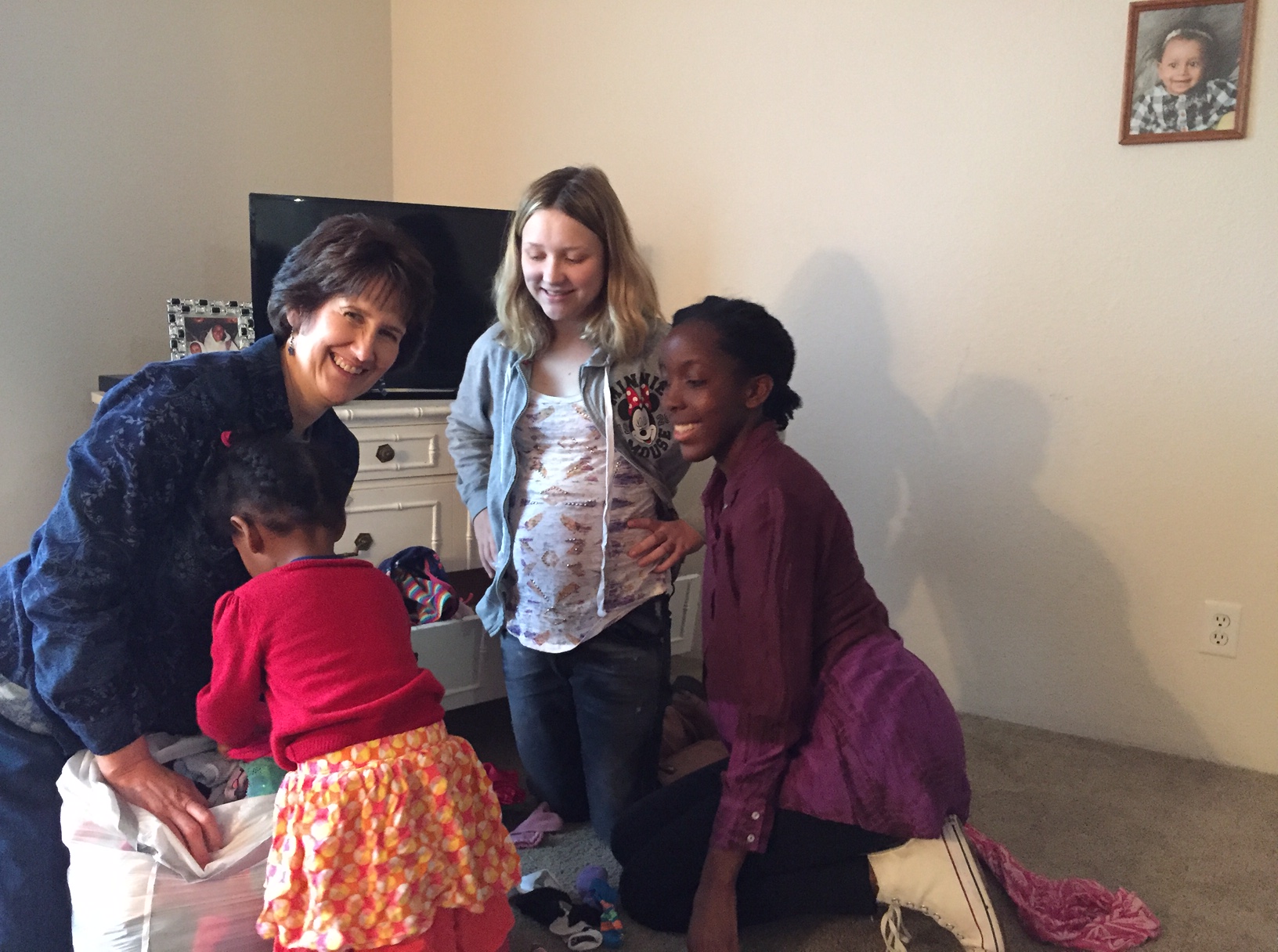 After eating all that food, the girls helped sort out some clothing that had been given to the little girl.  They helped pick out the things that were the right size and would be useful to her.  As you can see, she decided to wear some of it on the spot!  Then, she put on the coat and boots Wo-Wah brought her.  She wore them for the rest of the time. 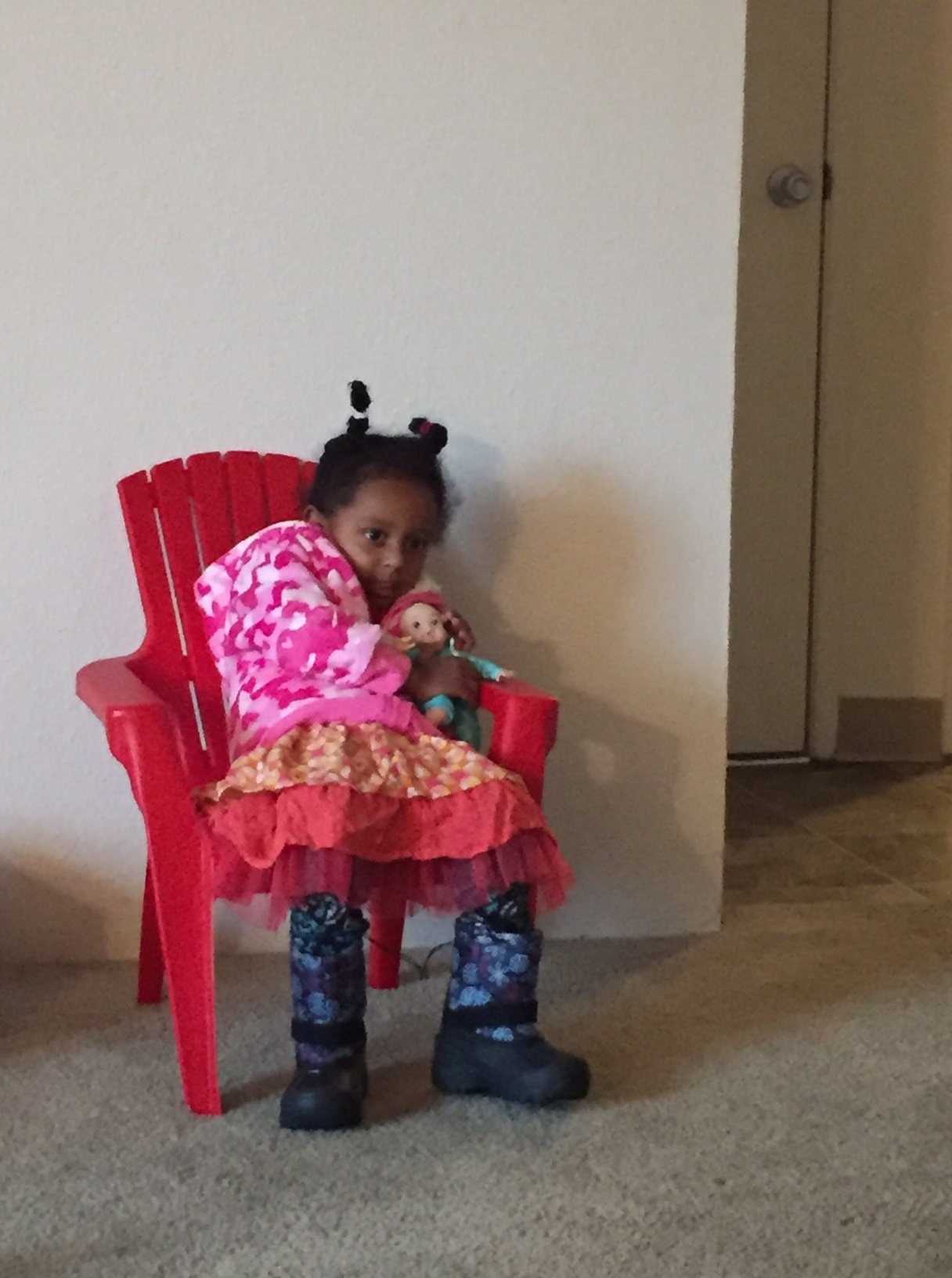 All-in-all, it was a great day.  The girls got an insight into a country they had never studied before, and a little glimpse into the food and hospitality of the people who live there. They learned that in some places conditions are not as nice as they are here.  They learned about a place where the army can draft you, keep you for how ever long they want to, and not pay you.  They learned about people who wanted to come to America because they could have a better life for themselves and their children, and that it takes amazing courage and incredible perseverance to do that.

I had a wonderful time getting to know Harnet a bit–I’d only met her one other time before.  It ended up being a long day, because we got back in time for church so went directly there, and then I took both girls home afterwards.  I got a lot of mileage out of that tiny cup of super strong coffee–although I told Rosalie that I was going to have no problem sleeping, it took me until 1 a.m. to go to sleep.  Hmmmm.  Guess I won’t be taking up Eritrean coffee as a habit!!!

I am very thankful to Rosalie for arranging this interesting, informative day, and to Harnet for her hospitality.  It was an authentic experience that no amount of money could ever buy–and we felt very special to have been able to enjoy it.